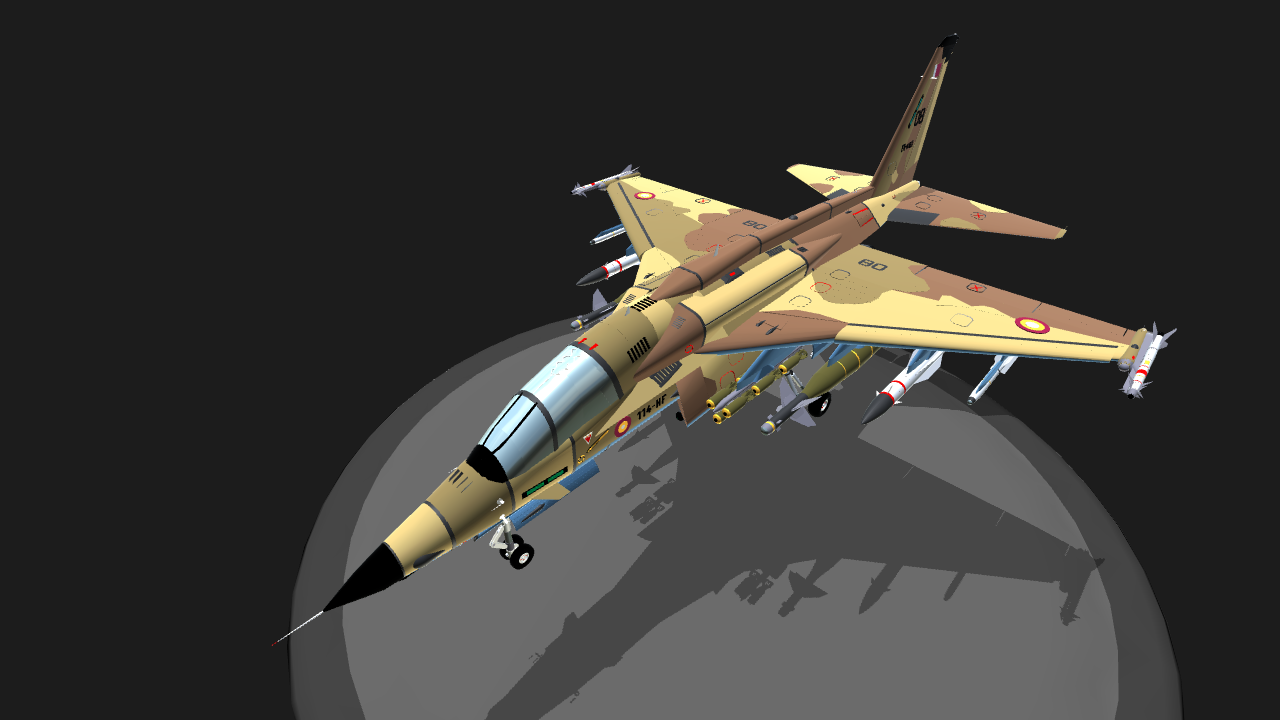 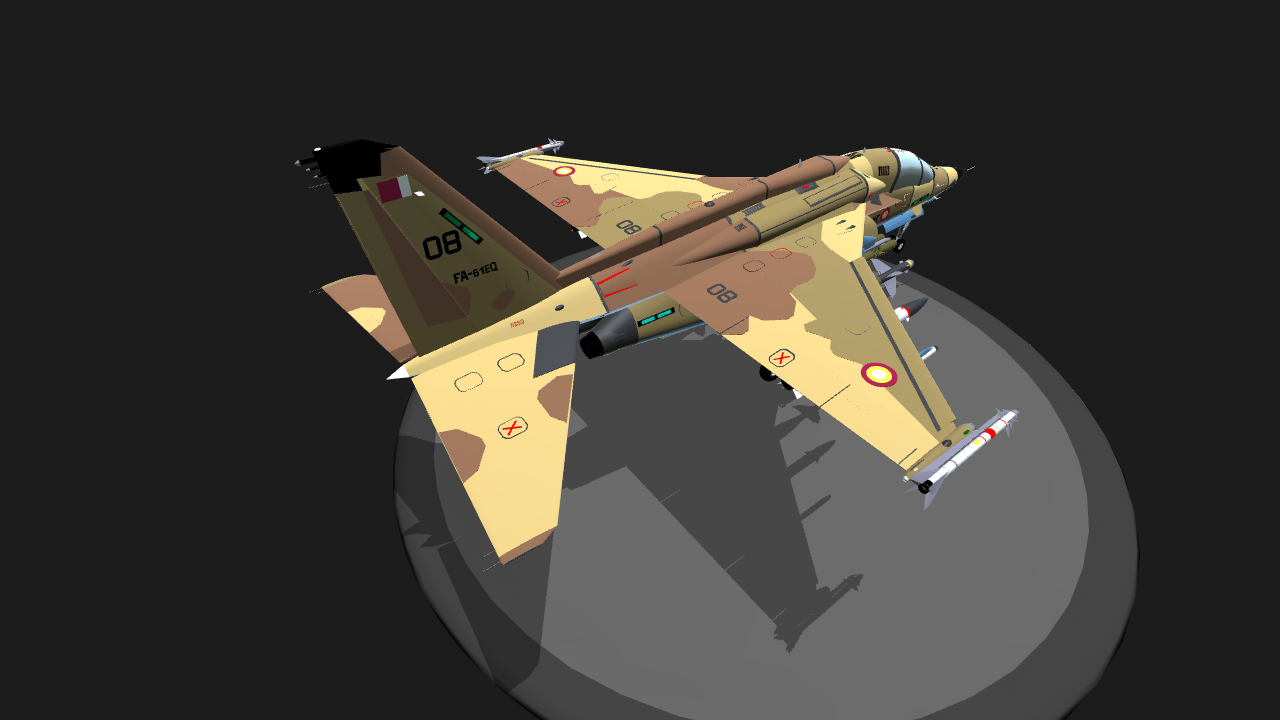 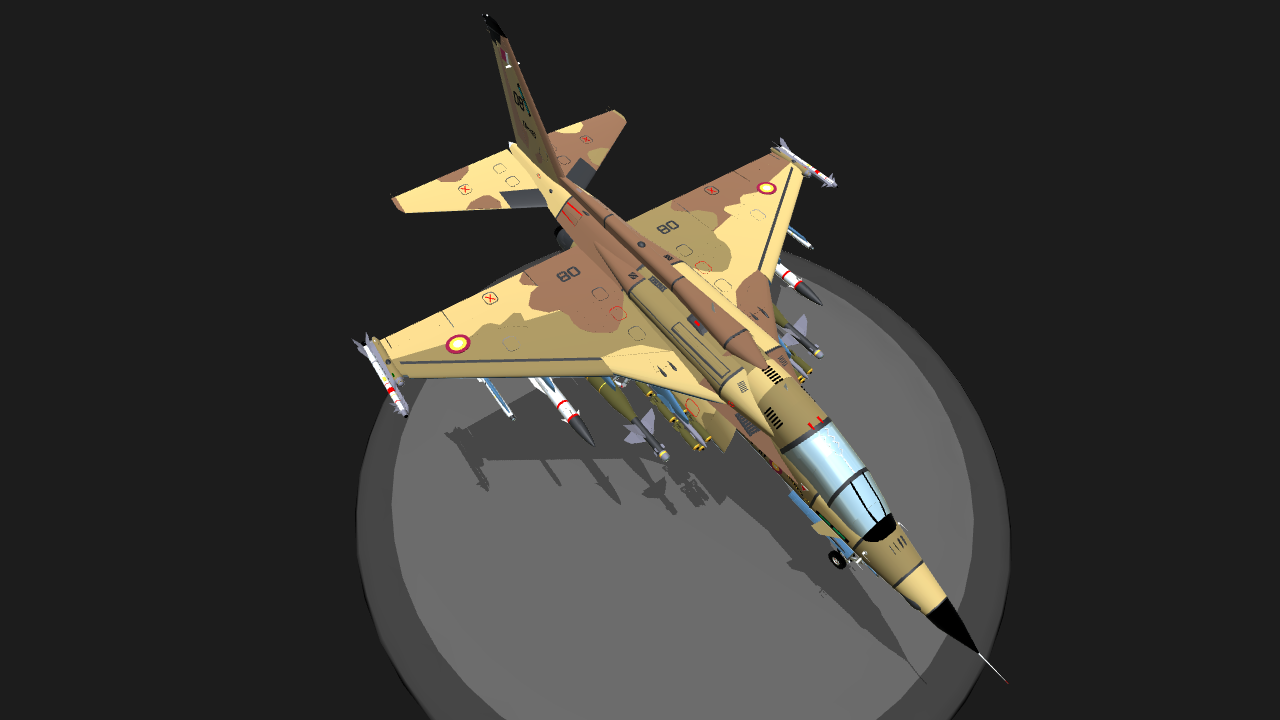 IMPORTANT NOTE: This plane has been built with realistic handling behavior, so when fully loaded it’s recommended to fly it cautiously and avoid abrupt maneuvers at low speed. In landing configuration with maximum gross weight and airspeed below 200mph the aircraft will expose severe signs of AoA stalling and adverse yaw if over-controlled. Keep bank angle <40° and throttle always above 40-45%. The aircraft has been flight-tested using a Saitek P2600 Rumble Force Gamepad for detailed handling and smoother movement and it is highly encouraged to use a gamepad, joystick or mouse-as-joystick mode for flying it.

The HarpiaDS FA-61EQ Desert Sparrow is a specialized twin-engine attack aircraft with a limited air-to-air capability, ordered by the Qatar Emiri Air Force so as to supplement the new fleet of F-15QA, Eurofighter and Rafale fighters for all-weather day-and-night precision strike missions. It’s an upgraded variant of the FA-61C/D Combat Tercel aircraft with many modifications in terms of modern avionics, combat equipment and state-of-the-art weapons in order to perform as an all-weather ground attack platform with far lower operating costs than other multi-role fighters already in use by the QAF. The decision of the Qatar government to purchase the FA-61EQ has been strongly opposed by Saudi Arabia and Boeing due to the reduction of the ordered F-15QAs from 42 to 36. QAF placed an order for 16 FA-61EQs plus 4 twin-seated FA-61EQDs and requested a series of modifications to be undergone so as the type to be specially deployed for Qatar’s defense needs. Most notable were the request for CFTs so as to free pylons for extra ammunition, redesigned landing gear for unprepared surfaces operations and addition of many specialized mission avionics all over the airframe. The retractable tricycle landing gear, has been massively re-designed with a twin nosewheel and single mainwheels retracting into the engine intake nacelles and is fitted with low pressure tires to suit operations on rough ground, while the undercarriage legs are tall to give good clearance for underslung weapons loads and easy-access for inspections and maintenance. Additional armor plates have been installed around the cockpit, the main fuel tanks and mission avionics so as to ensure pilot survivability and enhance system resilience. Also, QAF demanded the new FA-61EQ to be equipped with an arresting hook so as to facilitate emergency landings on its bases. All of the above dictated major reconstruction of vital aircraft parts and re-engineering of primary systems in the extent that the FA-61EQ has only a 45% commonality with the FA-61C/D Combat Tercel on systems, general lay-out and manufacturing tooling. The Desert Sparrow is equipped with an advanced E/O-IR (Electro/Optical-InfraRed) target designator embedded with an optronics fire control unit, all housed in the front part of the nose cone and controlled by a powerful mission computer, the AMC-6L “Oracle”. Just in front of the E/O-IR equipment, the FA-61EQ carries the AMRU-33F “Badger” Radar, an X-band modular radar unit with active search sensors and compact size to fit into the limited available space. The main radar unit provide outstanding air-to-air targeting capability when the aircraft is at low-level despite being a newly deployed equipment and lacking the power of other modern radars. Additionally, three extra smaller E/M antennas housed in bump fairings sideways and under the nose provide weather imaging, missile fire control, ground target acquisition and terrain mapping ability. The AMRU-33F “Badger” radar is able to target, identify and engage up to 4 targets in the sky simultaneously and offers a mid-range ground mapping capability up to 160km for terrain following mission profiles and nighttime operations. This radar and targeting equipment arrangement has been chosen so as to free the center-line hardpoint for extra weapons or fuel and in order to facilitate maintenance and allow for future system upgrades. The FA-61EQ is powered by a pair of HarpiaDS Kigal TFX-500J after-burning turbofan engines, a direct descendant of the previous AeneasX TFJ-200, producing 15% more thrust. HarpiaDS developed a unique Diverterless Supersonic Inlet (DSI) system for the new engine so as to be capable of sustained supersonic flight. The FA-61EQ was designed from the onset to accommodate additional operational upgrading, including new avionics and weapons. A modular avionics architecture is employed, allowing for new equipment and systems to be incorporated and increasing the type's growth potential. The avionics systems are designed to further improve the fighter's ISR, ISTAR, RECCE, and target-sharing capabilities through secure satellite data transfer protocols. The aircraft is equipped with GPS/INS embedded systems, which offer multiple functions such as the coupling of the navigation and attack system. The communication systems include VHF/UHF transceivers, A-IFF transponder, satellite communication systems, Link16 tactical data link and Automated Ground Collision Avoidance System (AGCAS). The aircraft has a combat radius, in full-weapon load, up to 450 nautical miles thanks to the Conformal Fuel Tanks which include a retractable refueling probe for in-flight refueling and range extension. The FA-61EQ is armed with eight wing pylons, two wingtip rail-pylons and one under-fuselage pylon for large loads or two hardpoints for small/medium loads, giving it the capability of carrying a total of 18,000lbs combat load totaling a gross weight up to 37,000lbs while maintaining a high thrust-to-weight ratio. It can be equipped (in ground attack mode) with the entire Paveway series air-to-ground precision guided munitions (PGM) and with up to four AA missiles for self-protection. The two inner-most wing pylons are reserved for free-fall medium-sized ordnance and/or specialized mission pods and became available after the redesign of aircraft’s airbrakes. Aircraft’s main armament include dual 30mm cannons (only the EQ variant) with 600 rounds each and various laser-guided bombs, air-to-surface missiles, anti-ship missiles, free-fall bombs and rockets, short and medium-range air-to-air missiles, as also reconnaissance pods, and specialized electronic warfare pods. The self-protection system has been massively upgraded to the IronCloud MkII standard including dispersed radar warning receivers all over the fuselage and wings, flares and chaff dispensers and an advanced ECM protection suite with active electronic warfare and jamming systems. The Desert Sparrow is certified to carry and fire many modern weapons including a wide array of sophisticated precision-guided weapons for a multi-dimensional air-to-ground operations adaptability. These weapons include the newly developed AIM-11J “Scorpion” AAM and the AGM-89B SHARK air-launched ground attack missile. The AIM-11J is an upgraded variant of the previous TJ-10A “Rattler” AAM and currently one of the most advanced AAMs in the world. As a beyond-visual-range missile, it is capable of "lock-on after launch" (LOAL), and has full-sphere/all-direction (including rearward) attack ability. The missile features an advanced electro-optical infrared homing seeker which scans the target area for hostile aircraft, then locks-on for terminal chase. The AGM-89B SHARK missile is designed primarily to destroy enemy radars for the purpose of Suppression of Enemy Air Defense (SEAD) missions via homing in on electronic transmissions coming from, virtually any, surface-to-air radar systems and has a multi-mission, multi-target precision-strike ability thanks to its Adaptive Target Sensor Technology – ATST and can be used as a general purpose ground-attack missile in different attack profiles. NOTE: It’s advised NOT to attempt a landing with increased weight and the centerline hardpoint un-jettisoned. Consider jettisoning centerline payloads and other unnecessary weight before landing so as to avoid excessive sink rates and overstressing main landing gear.

• Weapons Release Velocity: 200-600mph at 30%-100% Throttle
• Target always IN FRONT & SLIGHTLY BELOW AIRCRAFT’S LINE OF SIGHT
• DO NOT fire any weapons with excessive nosedive or extreme sink rate
• IT’S NOT ADVISED TO JETTISON EXTERNAL STORES UNDER NEGATIVE HIGH-G LOADING & AT HIGH SPEEDS (>600mph) Credits
@RamboJutter for teaching me his camouflage building technique and for his F-105 airbrake design that I used as a basis for the new FA-61EQ airbrake system and general building assistance in various parts of the aircraft.
@ChiChiWerx and @EternalDarkness for flight testing and constant feedback! 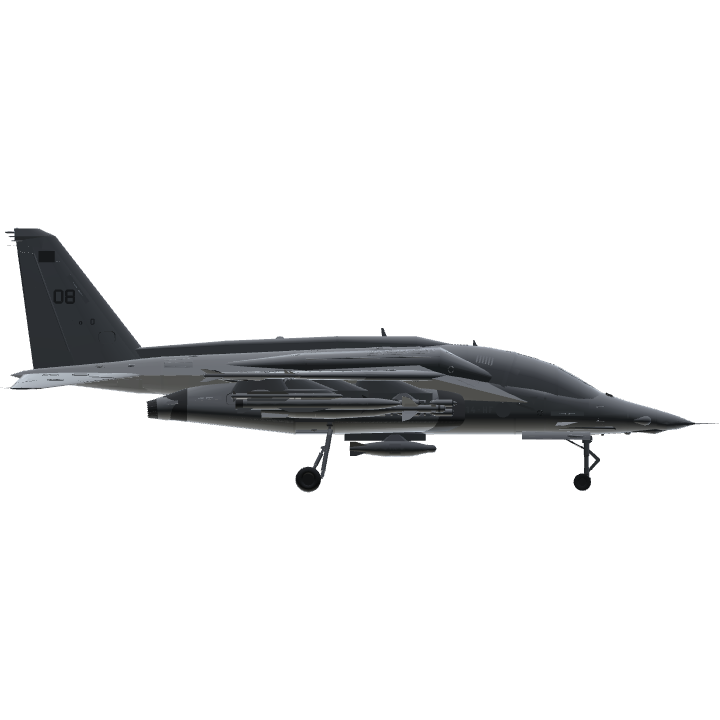 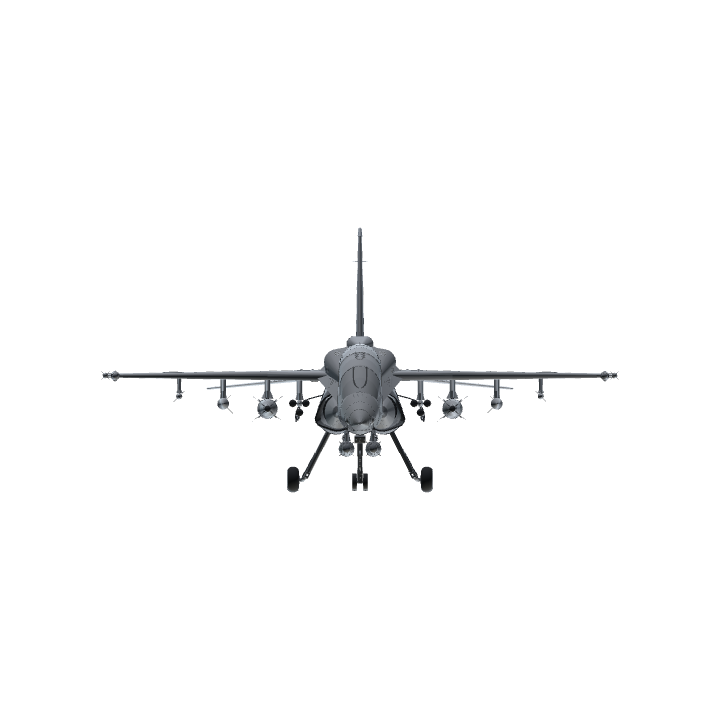