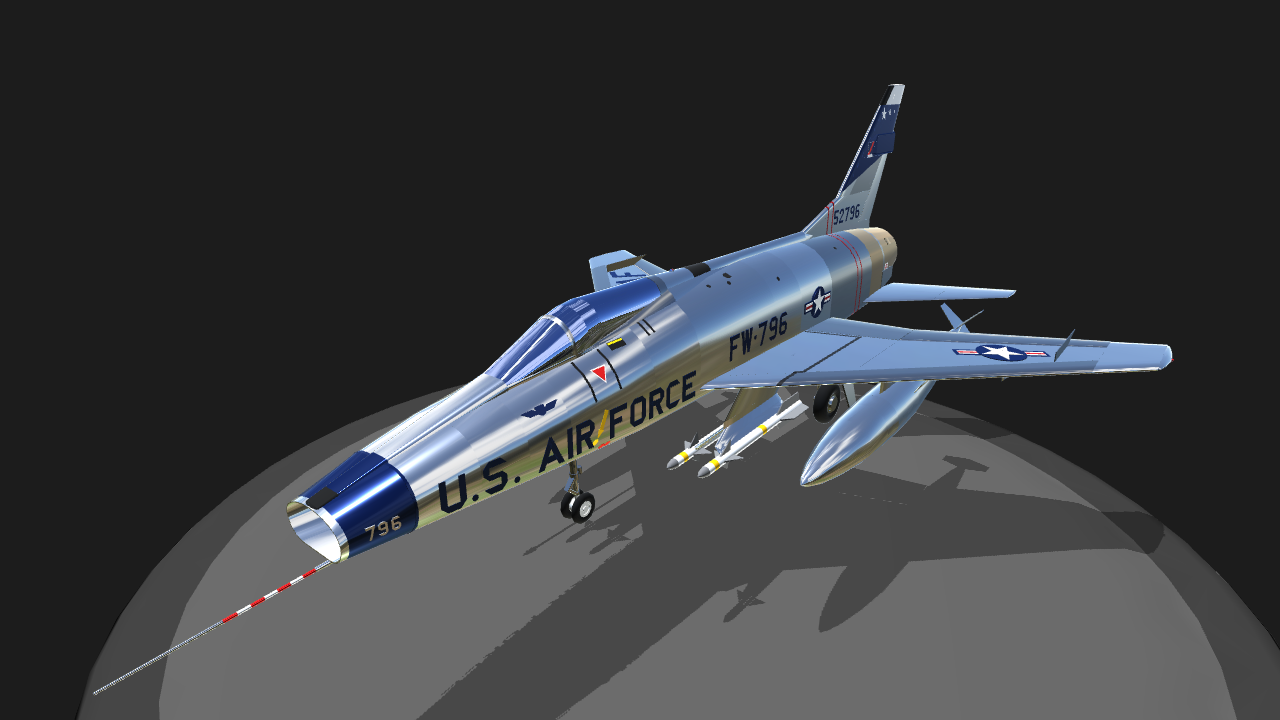 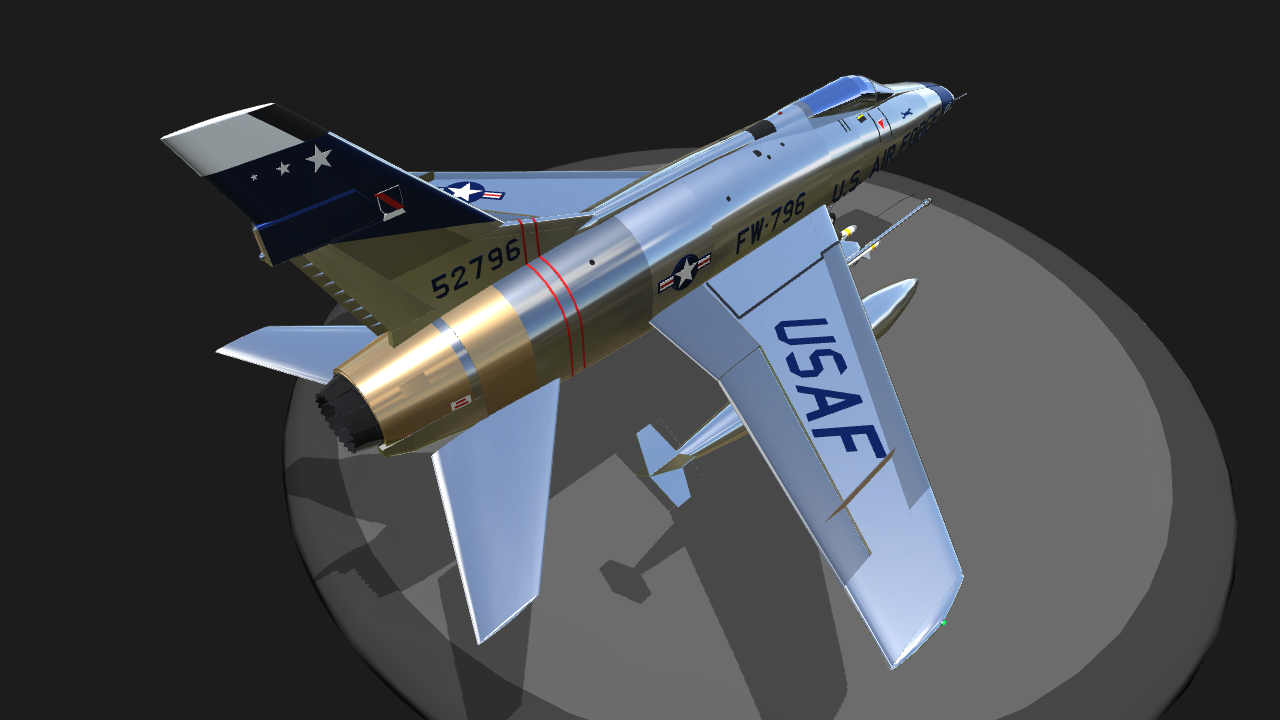 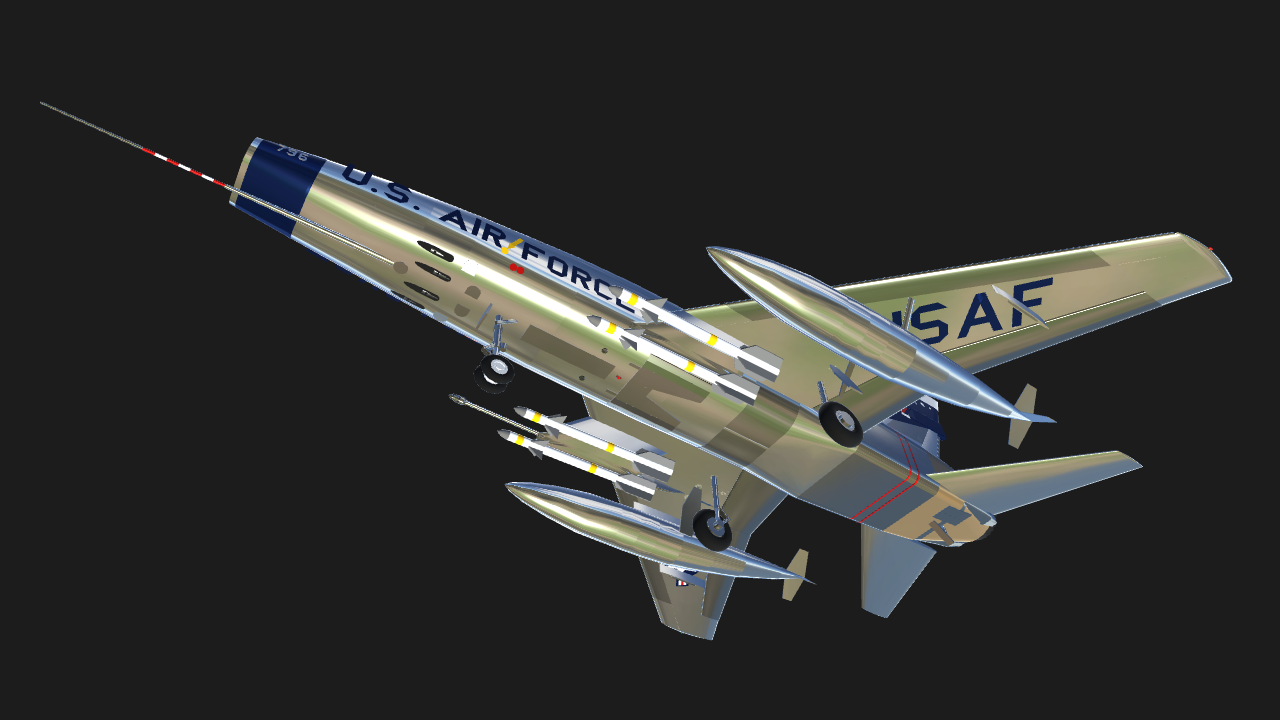 “Hey, Joe! Did you hear? We’re getting the hottest ship around, the North American F-100 Super Sabre, otherwise known as the “Hun”!”
“Yeah, it’s about time! Back in Mig Alley, those Reds and their Mig-15s gave us one heck of a fight!”
“Well, we’ll love this new bird, it’s SUPER-sonic! Just don’t get slow on final approach, or she’ll do the “Sabre Dance,” and you don’t want to be there low and slow with nowhere to go!”

First of all: Credit to my fellow SPMC members and SP buddies, BogdanX and F104Deathtrap who gave me great suggestions and helped me work out a couple of bugs! This one is ready to depart the flight line for an air-to-air mission carrying four AIM-9B Sidewinder missiles (Guardians have to stand in for the AIM-9Bs…sorry!) Afterburner, 4x Pontiac M39E 20 mm revolver cannons, flaps, speed brake and custom landing gear.

Actual cockpit layout, with A-4 gunsight so that you too can pretend you’re a hot USAF 1Lt fighter jock facing down the Red Menace! HISTORY: Ladies and Gentlemen, I present the North American F-100D Super Sabre, the world’s first supersonic fighter…though the Soviets claimed the MiG-19 “Farmer” preceded the Super Sabre into service. Even if that were true, the “Hun” (short for “One Hundred”) was still the free world’s first supersonic fighter. The “Hun” started development as an improvement of North American Aviation’s (NAA) very successful F-86 Sabre, but with a 45-degree swept wing. NAA realized the “Hun” would have to be much more extensively redesigned to achieve supersonic speeds, leading to an all moving horizontal tail plane, finer (more length to width) fuselage and one of the finest engines of that time, Pratt & Whitney’s afterburning J57. The Super Sabre entered operational service on 27 September, 1954 with the 479th Fighter Wing at George AFB, California. Despite growing pains involving longitudinal instability and tendency to want to kill its pilots in the landing pattern, the “Hun” became well-liked among its pilots. However, in spite of the fact it wasthe fastest jet in the skies in 1954, it was rapidly superseded by newer designs such as its “Century Series” stable mates, the F-4 Phantom and the MiG-21. But it more than held it’s own as a fighter bomber during the Vietnam War, especially the ultimate of the series, the “D” model. It flew more sorties than any other US type in Vietnam. It was also employed in the “Wild Weasel” SAM suppression role, facing down SA-2s Surface to Air missiles by flying straight down the radar beam and taking the SAMs out with rockets and bombs. Though never officially credited, the USAF and Vietnamese acknowledge that the “Hun” achieved a single MiG-17 kill on 4 April, 1965, when USAF Captain Donald L. Kilgus of the 416th Fighter Squadron, gunned a MiG-17 with his four Pontiac M39E 20 mm Revolver Cannons, sending “large chunks” flying off the enemy “Fresco”. That MiG failed to return to base that day. The Taiwanese also claimed several MiG kills using U.S. supplied “Huns” armed with the then-new AIM-9 Sidewinder missile. The “Hun” was also flown by the French, Danes and Turkey before being retired in the 1980s. Trim – Trim (duh). Like a real airplane, trim is required to fly straight and level with speed changes. Don’t be afraid to use during flight. Generally, trim one click down (nose up) setting for takeoff and full down (nose up) for approach and landing.

VTOL – Down to lower flaps. Takeoff flaps ½ notch down, approach and landing extend flaps all the way.

AG1 – Nav and Landing Lights (I swear, they’re really pretty and the landing lights extend with the gear!)

AG2 – Afterburner! Use judiciously for takeoff and in combat, be sure you don’t hit your Bingo Fuel to soon!

AG3 – Jettison your drop tanks for extra speed and maneuverability. Wait until after 55% fuel to avoid getting rid of useable gas!

AG4 – Jettison your outboard stores, though they’re empty on this build.

AG5 – Drogue chute, use after you touch down to reduce your landing distance, always a problem in a hot jet like the “Hun”.

Takeoff: Preset trim to one notch down (nose up trim), activate AG2 for afterburner. Throttle all the way up to 100%. Maintain centerline using quick “stabs” of rudder. Pull all the way back and she’ll fly at 200 mph. Immediately after takeoff, retract the landing gear, retract the flaps and deselect afterburner by deactivating AG2.

Combat Tactics: Activate AG2 for AB going into the fight. She turns best at 500-600 mph, below 20,000’, though U.S. fighter tactics call for engaging MiGs at higher altitudes, making one pass at high speed, then “hauling ass” to terminate the engagement. Jettisoning the drop tanks makes a huge difference in turn performance, though you’ll want to avoid jettisoning the tanks above 55% fuel, as there will be useable gas left in the tanks. There are four guns on this jet, very effective at close ranges and if you’re going after ground targets, the most effective strafing angle is a 15 degree dive at 400-450 mph. Break into any missiles which are fired at you.

Approach and Landing: Slow down as you set up for landing--use the speed brake to slow down fast--trim slider down as you slow, extend the flaps all the way down. You’ll reach full trim slider down (nose up trim) as you slow. Make your approach at 200 mph, roughly 20-25% power as required. Don’t use AB for approach and landing. Put your aiming reticle at the far end of the runway as you approach the approach end. Reduce power to idle and flare to land. Activate AG5 after touchdown. Use brakes as necessary to come to a stop. Visit the squadron bar after debrief and sing old fighter pilot songs with your fellow pilots. 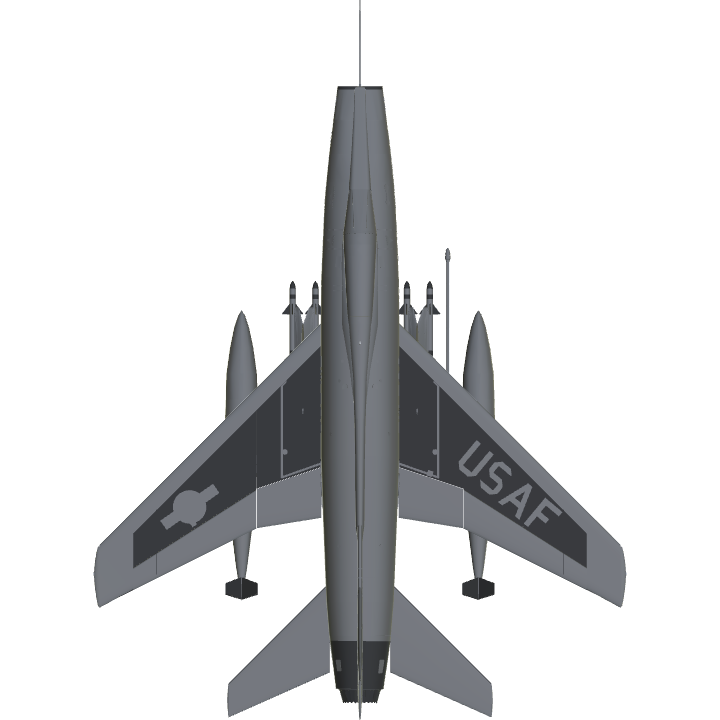 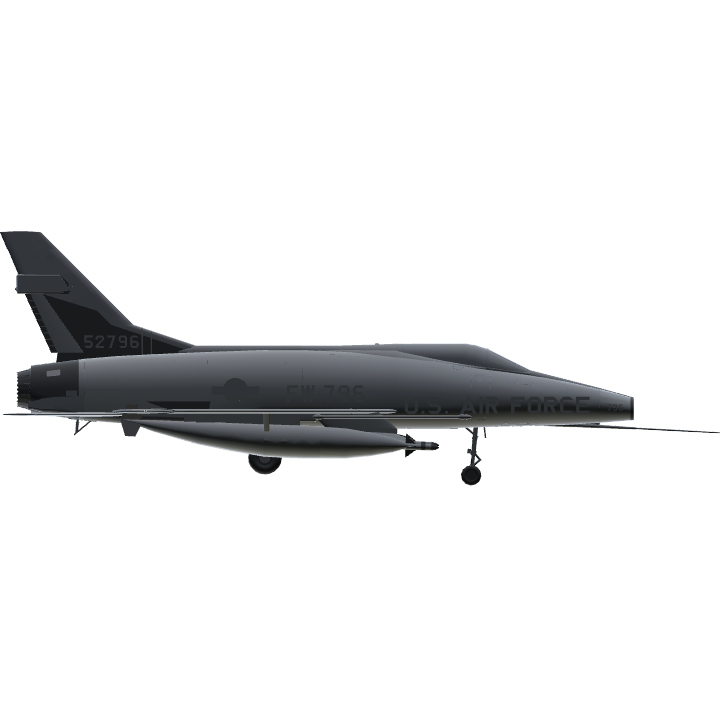 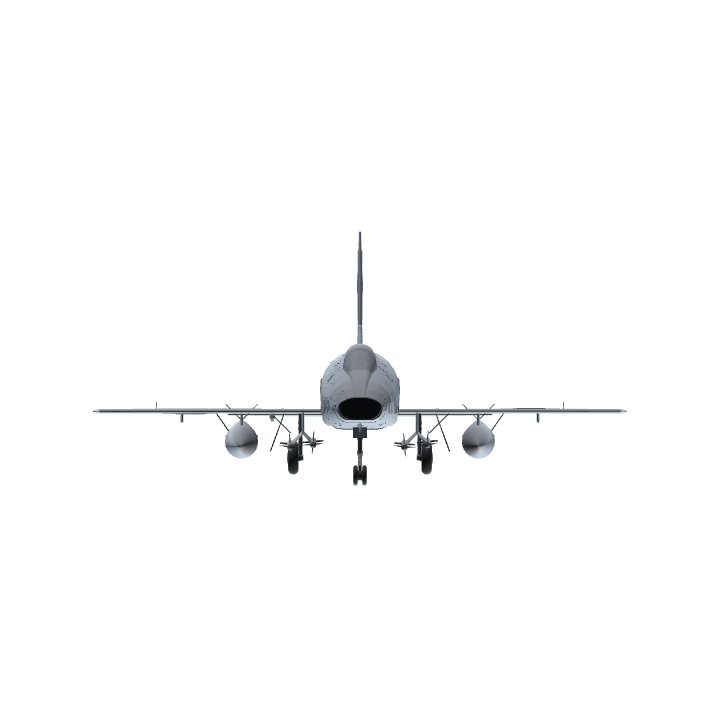