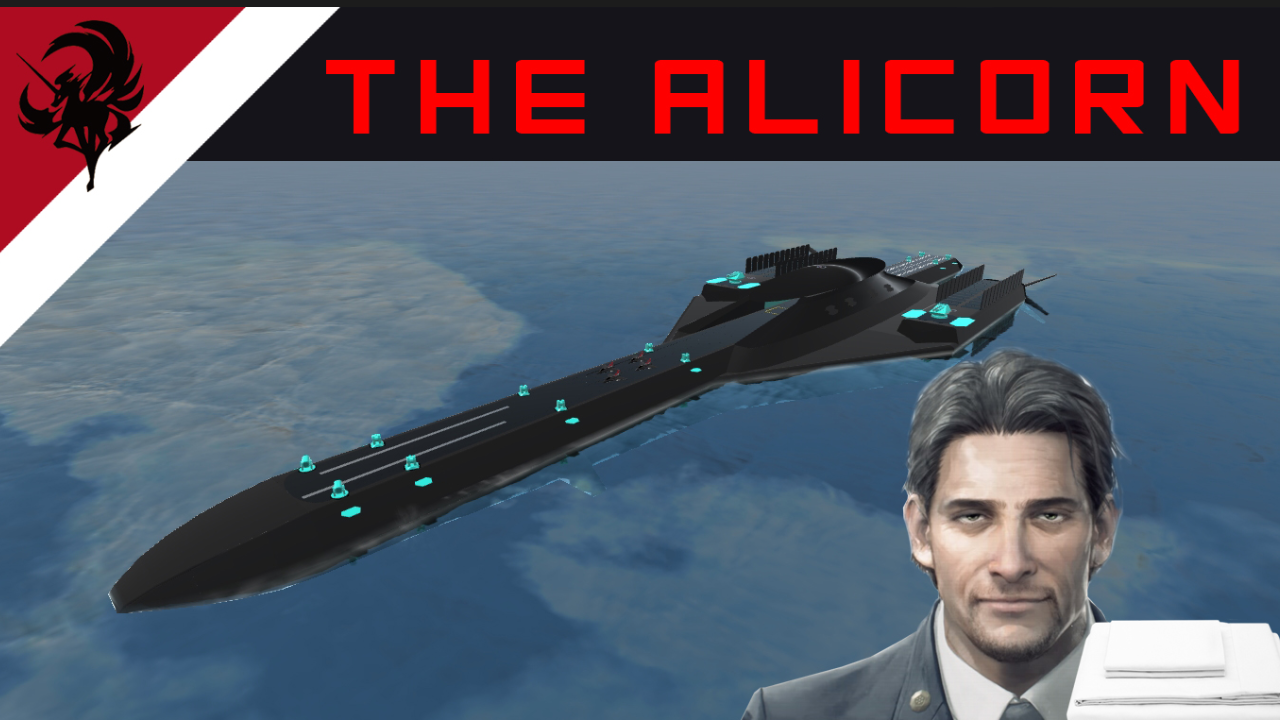 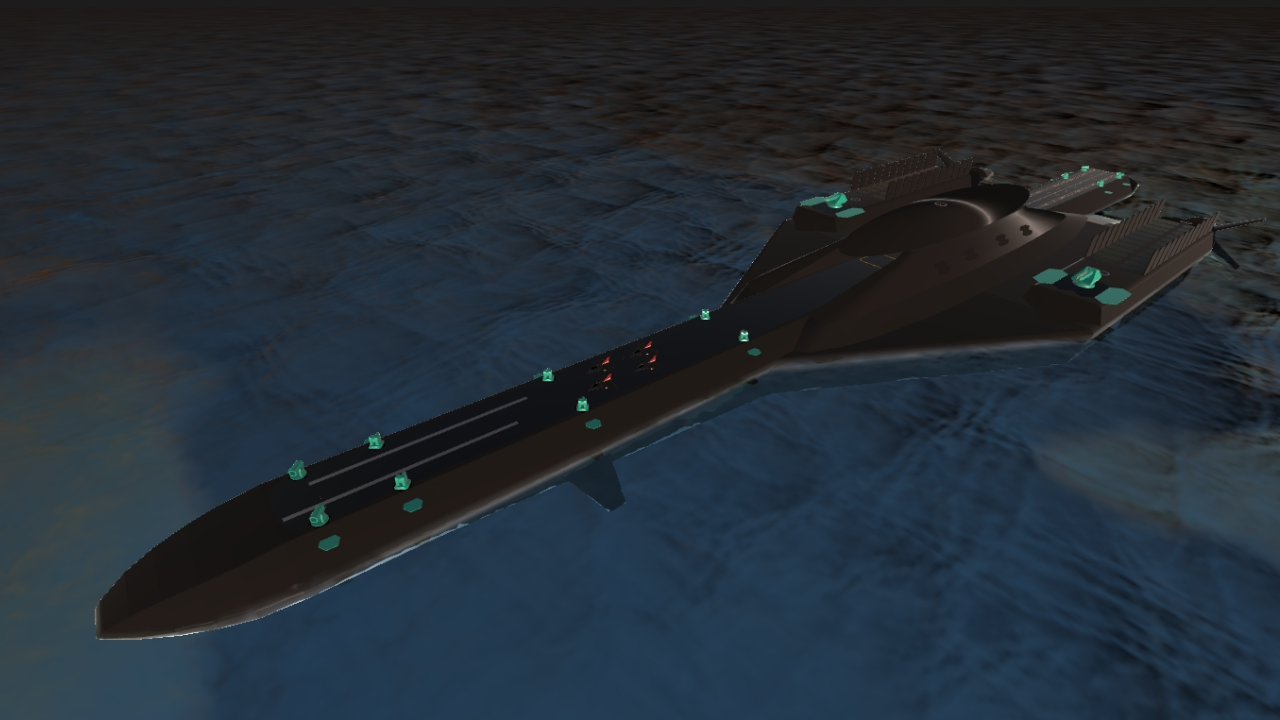 Foreword
Well, I Finally Completed this Build,
But I am Very Sorry. This is my First, and will be my ONLY 1000+
Build, Because my Laptop just cannot Handle Too Much Parts.

Lore: Taken from Ace Combat Wiki:
The Alicorn was a large nuclear submarine and the only known member of the Alicorn class of submersible aviation cruisers. The Alicorn and its captain, Matias Torres, are the main antagonists in the additional DLC story missions for Ace Combat 7: Skies Unknown. The Alicorn carried numerous weapons designed for mass destruction, including a massive railgun that could fire shells equipped with nuclear warheads. As the successor to the Scinfaxi class of submarines, the Alicorn also featured a runway and landing strip to support squadrons of fighter aircraft.

All the Offensive Armaments are All Based on the Details Provided on the DLC Mission 1 Briefing. If you Look at the Cut Scene, you can see the Performance of the Railguns, the Number of VLS, and the Speed of the Sub. Also Because I cannot Play Ace Combat,
I based this build on Videos I found on youtube. 1st Video 2nd Video

I Tried to Find the Performance of the Alicorn's Railguns Everywhere. But the Only Thing I found is its Rate of Fire and Range. I Did not find how fast the Bullet Travel. The Railgun that has an Official Bullet Speed Placed on it, is Stonehenge which is 6km per Second.... So Expect Both your Railguns to be that Accurate.

According to my Intel, the Alicorn has 48 Launchers in Total, 24 in each Auxiliary Hulls. There are VLS that are Dedicated to Anti-Air and there is also for Anti-Ground. And Just Like the one on the Alicorn, these missile's Homing ARE OUT OF THIS WORLD, but they are Slow, so Fast Aircrafts can Dodge them Easily. Lastly, According to my Observation in the In DLC 1 and DLC 3, the Alicorn Can Shoot Anti-Ship Missiles. Though I am Sure those are Just the VLS Shooting Regular Missiles on the Ships, But you know, Let's just Put Anti-Ship Missiles on it for the Fun... :P

"The Thing's almost like a Porcupine, I can't even get close!"
-Lanza

Unlike the Real Alicorn's CIWS, this Alicorn's CIWS are on Steroids. They have a VERY WIDE Spread. But Be Careful, because it may Cause Lag. there are 2 groups of them, one on the Front, and another group on your rear.

Yep, the Most Unpopular Weapon of the Alicorn. The SAMS are just too Underpowered in the Real Alicorn. In Fact, most of the youtubers are having a Hard Time Dodging the VLS than the SAMs. So I Buffed the SAMS in my build. In this Version, the SAMS travel FASTER than the VLS, but their Homing is Very Poor. Basically, these SAMS are HVAAs.

"20 to 30 Depending on the type of Aircraft. But its Unconfirmed Intel, Maybe More."
-David North

This Alicorn has Aircrafts! But Unlike the Real Alicor that can Carry around 30 SACS and an Unknown Number of SLUAVS, this Alicorn got only 4 SACS and 8 SLUAVS, and Each of them has their own unique Function.

No Just Kidding. Nobody know what SACS means. They are SOOO HARD TO CONTROL!!! And you Can't Control the Speed of the SACS, you only have 3 minutes of flight time before you self destruct and Lastly, YOU CANNOT LAND BACK. But you do have Pulse Lasers. You can also Kamikaze to the Enemy Ships. You have Highly Flammable Fuel... :P (Each SACS has Clevers Strapped on to them... )

Yes, those ANNOYING and Very Maneuverable SLUAVS. But Unlike the One in the DLCs, these SLUAVs only has Guns. You Need to Constantly tell them what target you want them to go after. They Basically are Guardian Missiles with Guns and don't Explode. And, THEY CAN BE LAUNCHED UNDERWATER!!!

"The Barrel Exceeds 70 Meters! Its Range is over 3,000 Kilometers!"
-David North

And Last but not the Least! The Alicorn's Most Popular and Most DEVASTATING weapon; The Rail Cannon. Its Lockon Range is over 5000000, So Expect it to be VERY SCARY. BUT you have Minimum Range. 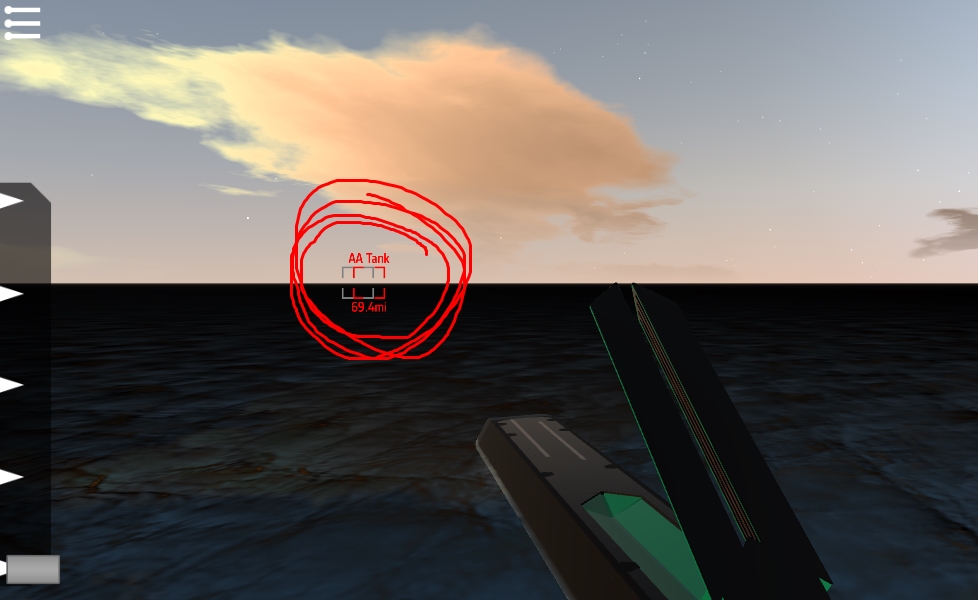 And Because it has a Very Big Dead Zone, In the Normal Simple Planes Map, the Rail Cannon is Basically Useless... Sorry about that...

Also, Because of how the Physics in Simple Planes, the Railgun Shell is not Really that Detailed. Its Literally just a Cleaver Missile. I Tried to Turn it into a Custom Weapon, but for some Reason, it just keeps breaking up in flight. I Got it to home in properly, but the Final and UNSOLVABLE Problem, is that the missile speed is not Constant; it accelerates. So you Literally can see the Shell leave the Barrel at a Slow Rate, and it Accelerates to its Max Speed.

Well, I Finally Finished the Alicorn. And as I Promised, I will be Returning on Building S.R.C. Builds.

But I am Sorry, I will be Taking a Break from Simple Planes. Because I cannot Make Builds with my Laptop. To Tell you the Truth, I Build Everything at School now, because the PCs there are more Beefier than my Laptop. I have 2 Simple Planes with me. One Cracked, and One From Steam. The Steam one is the one in my Laptop. But my Laptop is now Old, and cannot handle hours of Playing Simple Planes. So thats why I Downloaded the Cracked Version and Place it on my USB so I can Build at School. Don't worry, I am now in Collage and studying Computer Progamming. And Right now, I am WAY AHEAD of my Class. They are Still Learning about how to make Arrays while I already studied how to make and maintenance Databases. So Every Time Programming Subject Comes, I basically just play while Others are Jealous because I am TOO EXPERT on Programming.

But Right Now, My City is Under Quarantine Due to The Covid Virus. So I cannot Go to School. And I am Seizing this Opportunity to Rev Up my Arp Skin Mod for World of Warships. So As Long as This Quarantine is in my Place, I will not Start Building my Next Build.
.
.
.
.
.
.
Bonus Pics

"The Alicorn has Fired the Round" 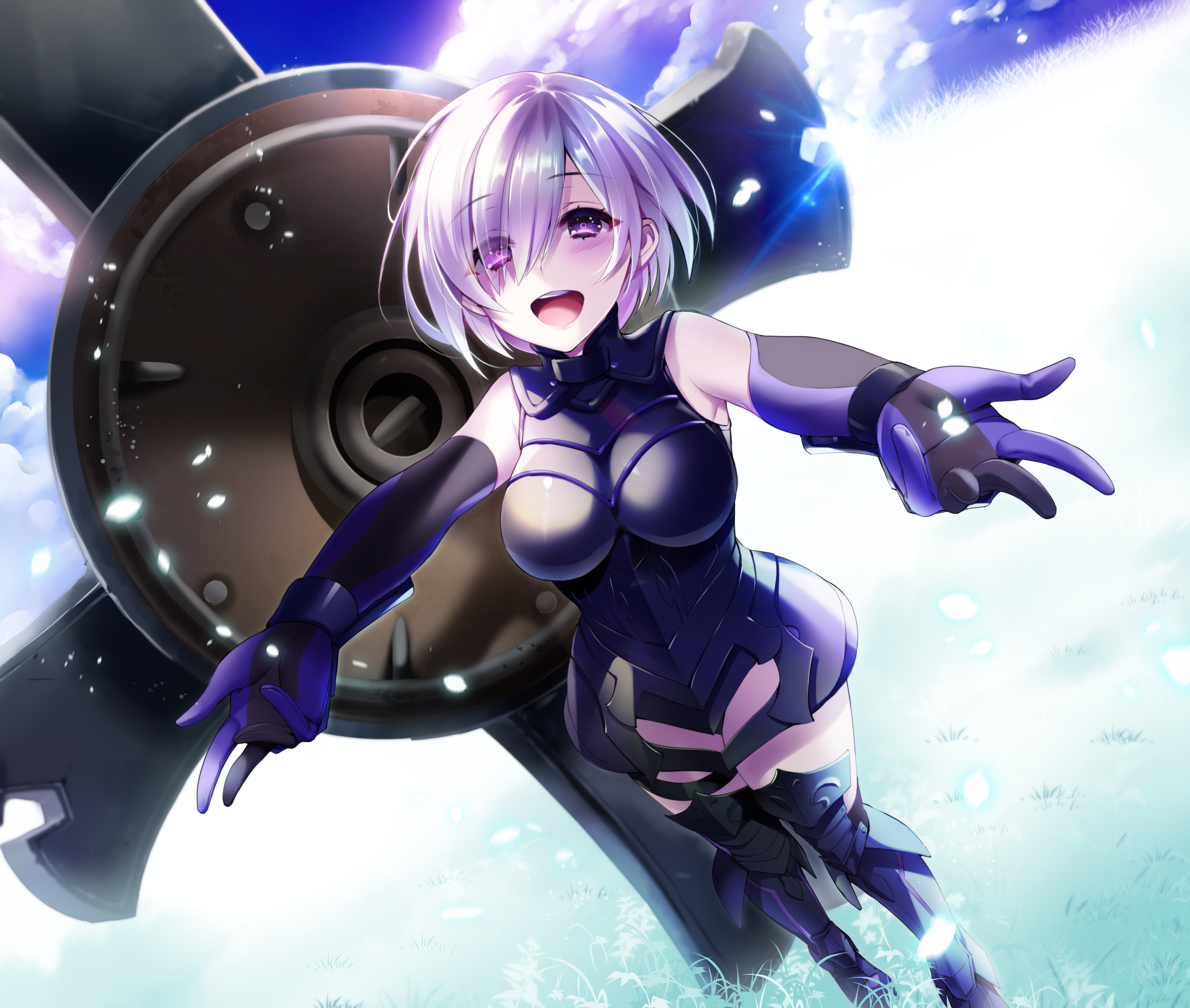 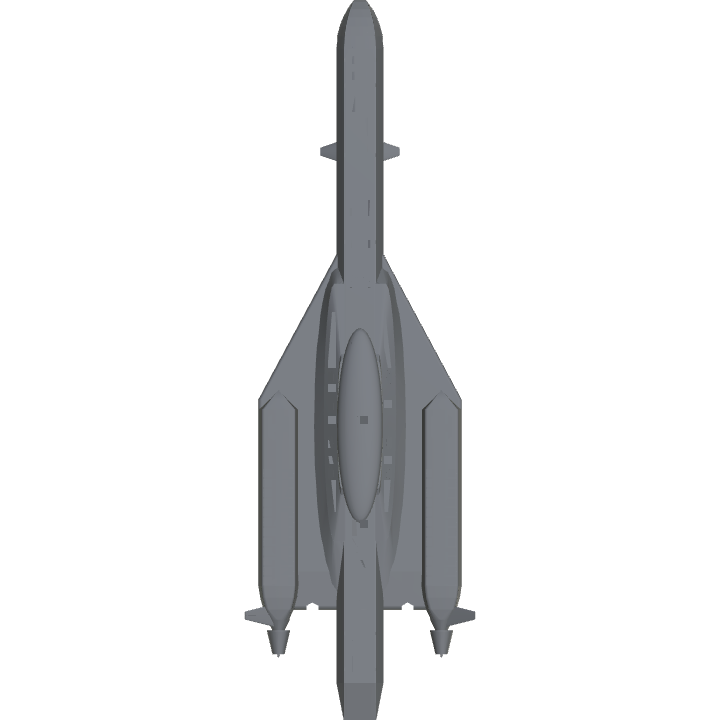 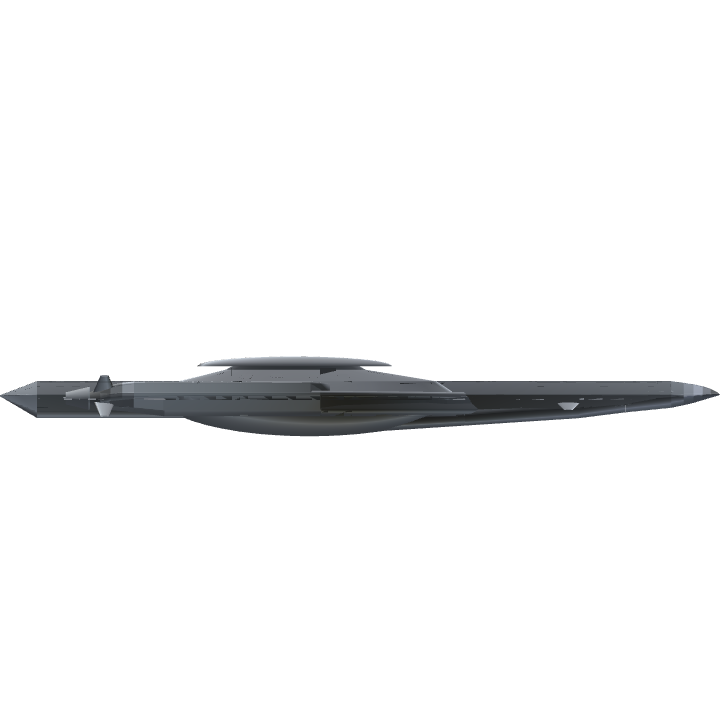 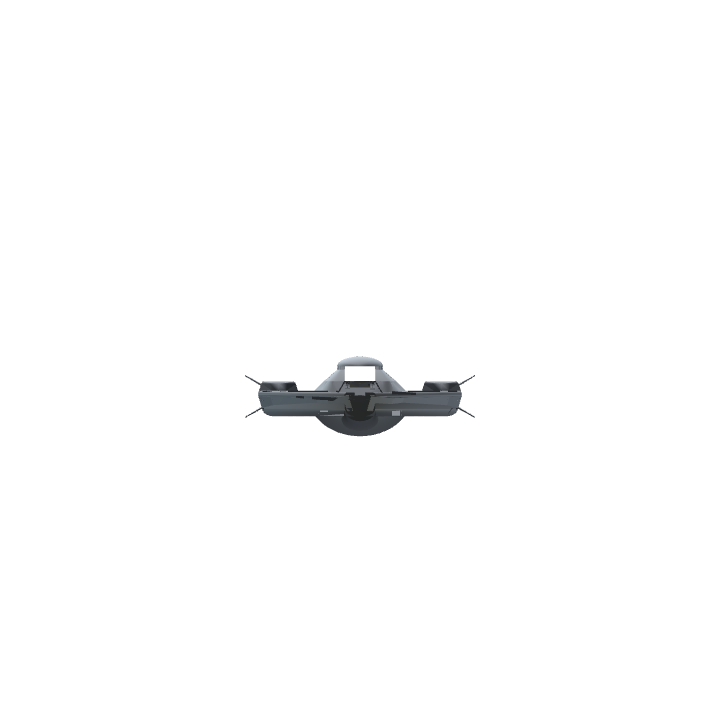