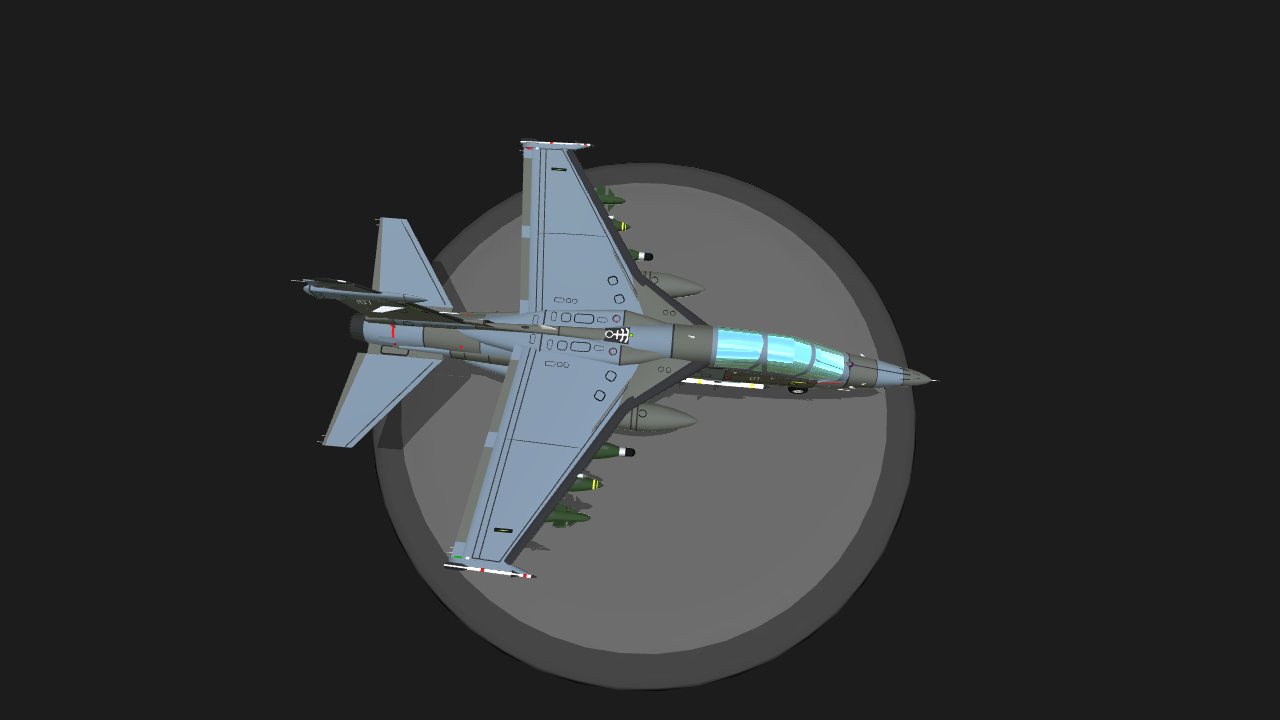 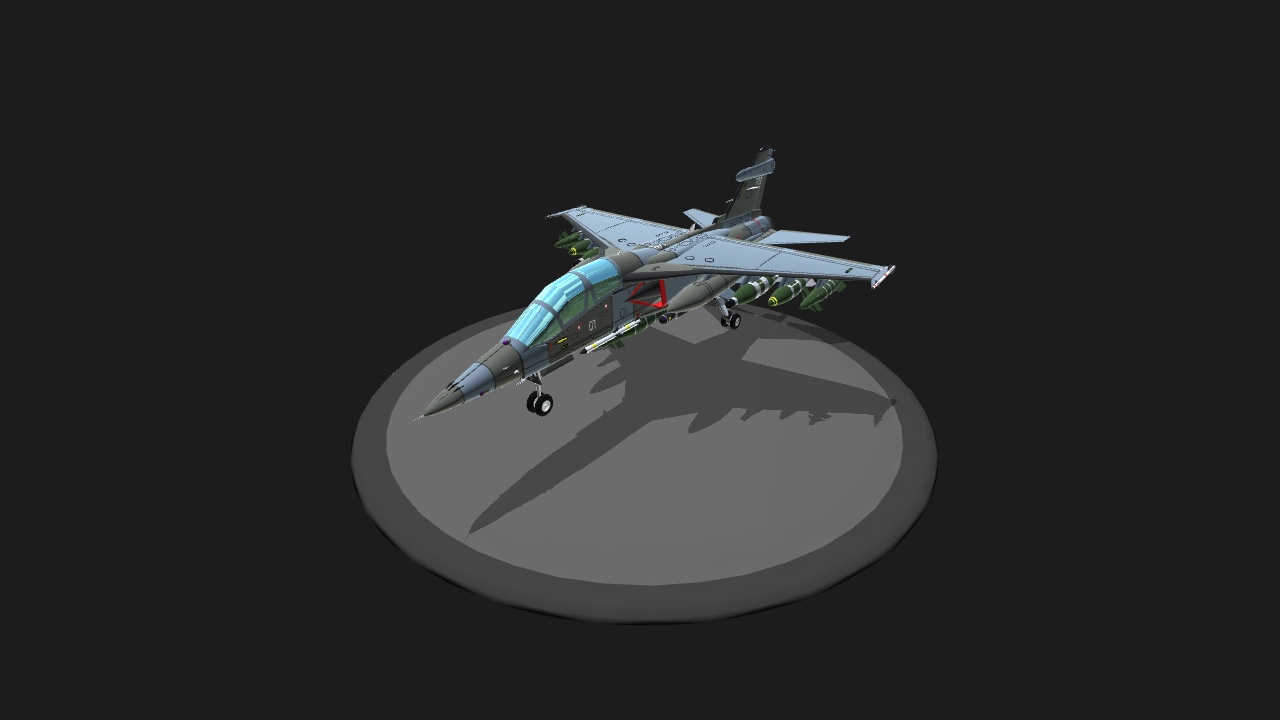 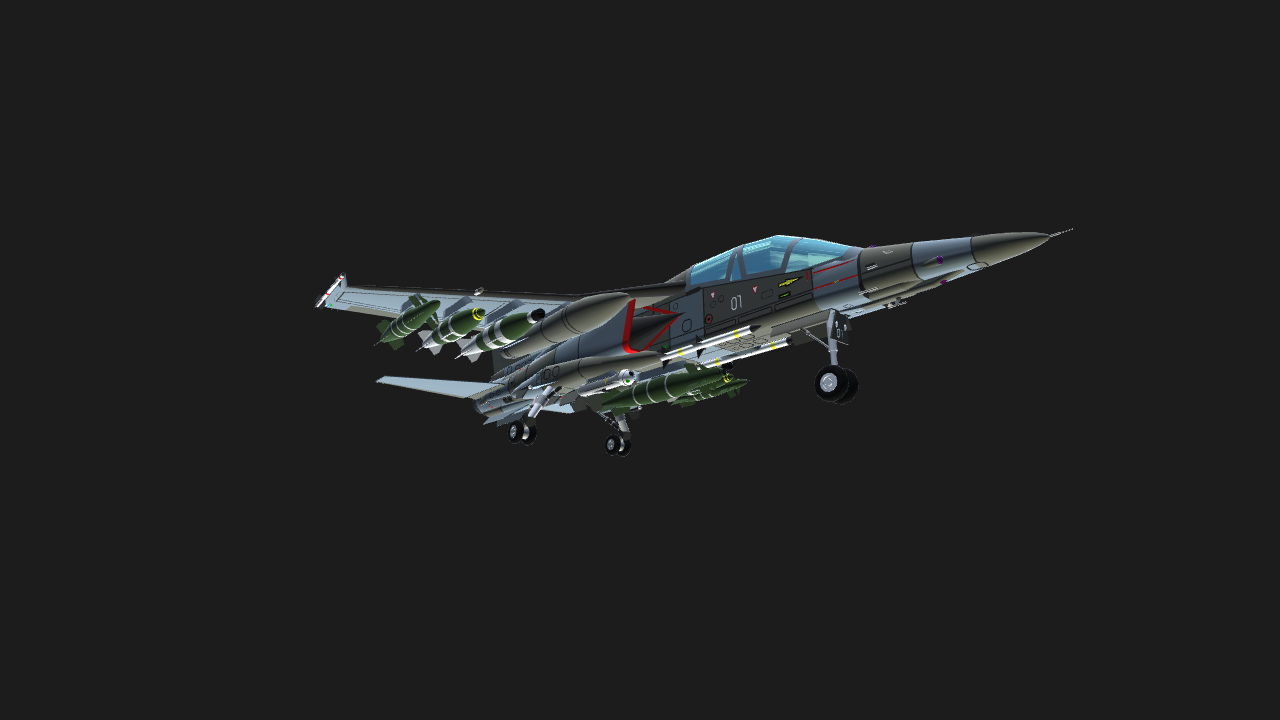 4) LDG INSTRUCTION
-Reduce Airspeed at 300mph and below
-Align with Runway at 1.500 ft Altitude and 2NM distance
-GEAR DOWN
-THROTTLE: 8-12% (depends on weight)
-TRIM: FULL DOWN gradually
-VTOL: FULL DOWN gradually
-Establish reasonable Rate Of Descent
-Airspeed 160-190mph (depends on weight)
-Make corrections using small THROTTLE movements (~1-2%)
-Maintain Attitude 1°-3° Nose Up
-At Touchdown: THROTTLE – 0% AND AG4 for Drag Chute
-When all wheels on ground and airspeed below 150mph - APPLY FULL BRAKES
-If any skidding occurs at touchdown, avtivate AG7 for Gyro-stabilization before applying full braking.

The AF.11 Jaguar II (AF stands for Attack Fighter or Anglo-French) is an all-weather, single-engine jet attack aircraft designed for the low-level penetration, close air support, tactical ground attack, SEAD/DEAD, RECCE/ELINT and strategic nuclear strike role. It has an outstanding low-level performance and it is praised for its stability, agility and increased payload carriage.

Not long after the successful deployment of the Kuwaiti F-29K Jackal to the war against ISIS under GCC (Gulf Cooperation Council) and of the Japanese F-3EJ Raijin to the establishment of the North Korean No-Fly-Zone under UN Security Council Resolution 2385, HARPIA DS has been approached by French and British officials in order to examine the feasibility of producing an affordable, subsonic, dual role trainer and light attack aircraft based on the F-29/F-3EJ series aircraft, in order to replace the Dassault AlphaJet and BAE Systems Hawk trainer aircrafts respectively and with potential export sales probability. HARPIA, after examining thoroughly the issue, counter-proposed the development of a dedicated attack fighter that can fulfil all the tactical support roles of both RAF and Armeé de l’ Air. This suggestion has been made; taking into account the fact that after the historic SEPECAT Jaguar has been retired from action RAF had no reliable attack platform as the entire Panavia Tornado GR.4 fleet was under retirement procurement, in decreasing numbers, in transition to the Eurofighter Typhoon, and later on, the F-35 Lightning II. The already acquired Eurofighter Typhoon has questionable air-to-ground capability and high maintenance and operational costs and the F-35 Lightning II will be used mainly as a strike fighter and also it will be fully commissioned no later than 2020. On the other hand, Armeé de l’ Air replaced the SEPECAT Jaguar with the Mirage-2000N/D attack variant but a decision has been taken for eventual phase out until 2018. The Dassault Rafale has not yet acquired full air-to-ground capacity and already had a cost overrun which pushed the French government to take down the Rafale ground attack development program and retain the air-to-air further development and export-sales orientation strategy (e.g. India and Egypt). Thus, the two largest NATO Air Forces, after USAF, have been left without an advanced precise strike platform for demanding and high-risk air-to-ground missions. After the implementation report has been handed to the Ministries of Defence of both countries an Anglo-French Military and Industrial Committee has been set up in order to examine the probability of producing a dedicated modern attack aircraft. The French and British government signed a Memorandum of Collaboration and created the Military and Industrial Partnership for a Modern Attack Aircraft (Partenariat Militaire et Industriel pour un Avion d'attaque Moderne-PAMIAM) alongside HARPIA DS as a primary contractor and BAE Systems, Thalés Group and Dassault Aviation as main sub-contractors. The future aircraft would be designated as AF.11 Jaguar II in commemoration of the historic attack jet of the 70s.

The AF.11 Jaguar II is powered by the Rolls-Royce Turbo Union RB299 Mk1A turbofan engine, which was developed in parallel and primarily for the Jaguar II. A separate partnership was formed between Rolls-Royce and SNECMA to develop the RB299 Mk1A, a two-shaft turbofan engine equipped with afterburners and sophisticated FADEC software. Single engine configuration was selected for lower production cost and ease of maintenance consideration, as an engine change being possible within 20 minutes by specialized aircrew personnel. The Jaguar II needed a high bypass capable of high thrust for take-off, supersonic flight and low level "dashes" and thus the air intakes have been modified and enlarged and the inlet cones have been redesigned and re-located.

The AF.11 Jaguar II has a maximum take-off weight in the 18 tonne class (~40.000lbs) and can manage a combat radius on internal fuel alone of 1.100 km (680 mi) and 1.400km (880mi) with 2 x external fueltanks (160us gal. each) , giving the Jaguar II a great operational range amongst modern strike fighters. Its maximum speed is at 1.300mph (1.130kts) or Mach 1.7 at an altitude of 30.000ft and it can attain Mach 1 at sea level on full after-burner. The aircraft has a total of 15 hardpoints fitted for external weapons loads of up to 15,000 lbs (6,800 kg) consisting of:
-1 centerline underfuselage pylon (with “wet” provision for external fueltank)
-8 wing pylons for weapons and external fueltanks (4 have “wet” provisions for external fueltanks)
-2 wingtip rail pylons for AA missiles.
-2 underfuselage pylons for target pods or small weapons loading
-2 extra pylons in the front fuselage, after RAF request, for AA BVR missiles.
The typical weapons loadout include:
> MICA IR, IRIS-T, ASRAAM or AIM-9X Sidewinder AAMs
> MBDA Meteor, AIM-120 AMRAAM and MICA EM BVR AAMs
> AGM-154-C3 JSOW, SCALP-EG/Storm Shadow stand-off munitions
> GBU Paveway II/III/IV/IV+ and AASM/HAMMER laser-guided bombs
> JDAM series INS/GPS guided bombs
> ASMP-A nuclear air-launched cruise missile
> AM.39 Exocet, AGM-84 Harpoon and RBS-15 anti-ship missiles
and various other air-launched NATO-certified ammunition. In addition to the missile/bombs armament options, the Jaguar II also carries a specially developed variant of the 30 mm GIAT 30 DEFA single barrel cannon, designated as the DEFA GIAT 30 MkII, derived from the Dassault Rafale aircraft but specialized for thick armor penetration. This is a single-barrel, electrically fired, gas-operated revolver cannon with a new linkless feed system, capable of firing up to 2.000 rounds per minute of highly explosive munition. The AF.11 is capable of carrying and firing new laser, INS and satellite guided bombs and has an all-digital modern glass-cockpit display with advance targeting equipment and anti-radiation protection canopy coating for nuclear strikes.

The AF.11 Jaguar II has incorporated all the previous modifications of the F-29 family and has retained all the advanced ECM systems, such as the Harpia/Elbit-made integrated ECM jammer system, the SPJ-201 “Thunder Punch”. The SPJ-201 is an airborne integrated jamming system designed and manufactured by HarpiaDS and Elbit systems of Israel but Thales Group purchased the manufacturing rights and incorporated it to the AF.11 Jaguar II as the SAMIR II-EM integrated ECM defensive kit. Receiver equipment and antennas are mounted in a fin-tip pod atop the AF.11’s vertical stabilizer wing, while jamming transmitters and exciter equipment are located in outer-wing probes and under-nose ECM phasmatograph receiver/analyzer as well as flares/chaff dispenser in tail compartment. The system is capable of intercepting, automatically processing and jamming received radio frequency signals in a wide electromagnetic range. The system receivers can also be used to detect, identify and direction find those signals, providing signals intelligence (SIGINT) and electronic intelligence (ELINT) either automatically or manually with many mission profile options and extended threat assessment and identification system (TAIS) database. The rear warning radar system can warn of attack from behind and deploys all the counter-measures automatically without needing to turn the aircraft. In addition, the AF.11 aircraft integrates an Infra-red search and track (IRST) sensor, the Infrared Target Acquisition System (IRTAS), in front of the canopy area, which is capable of passively detecting thermal emissions from air and ground targets in the aircraft's vicinity.

In response to France’s MoD request for air-refueling capability, the AF.11 kept the previous F-29/F-3EJ retractable nose-mounted refueling probe and the dorsal air-refueling receptacle on the upper backbone fuselage behind the canopy. That way the AF.11 became the first European fighter jet that is equipped with two different refueling systems.

AF.11 Jaguar II was requested to have the capability to carry modern laser designator and target pods incorporating the ability to use new reconnaissance and ECM pods. The Jaguar II has been equipped with a new HUD, a new hand controller and stick top, integrated GPS and TERPROM-Mk.IIG Terrain Referenced Navigation. Further modifications of the previous F-29 platform introduced the new DamoclesNG-Blk2B digital reconnaissance pod, the FoxHunter ER active laser designator pod, a helmet-mounted sight, improved cockpit displays, a Link-16 datalink, and improved NVG compatibility. The AF.11 Jaguar II has been fitted with the Jaguar Active Control Technology (ACT) with fly-by-wire controls and aerodynamic alterations to the airframe; the aerodynamic instability improved maneuverability and an all-new multi-mission and air-data processor unit has been developed by Thales and BAE Systems. The AF.11’s ATACNAV tactical navigation and attack system combines information from multiple onboard systems such as the air data computer, radar altimeter, GPS signal and advanced on-board powerful MMC-155BF mission computer, manufactured by Thales, to continuously calculate the aircraft’s location and define the weapons’ release and impact point.

Both countries have placed orders for a total of 180 aircrafts. RAF has ordered 80 aircrafts in order to equip 4 attack squadrons and Armeé de l’Air ordered a total of 100 aircrafts for attack and reconnaissance purposes. Many countries have shown interest in purchasing this modern multi-role attack aircraft, such as Argentina, Egypt, Romania, Serbia, Malaysia, New Zealand, South Africa, Canada and Ecuador. Many of the aforementioned countries are in a state of further negotiations for future procurements and armament specification. 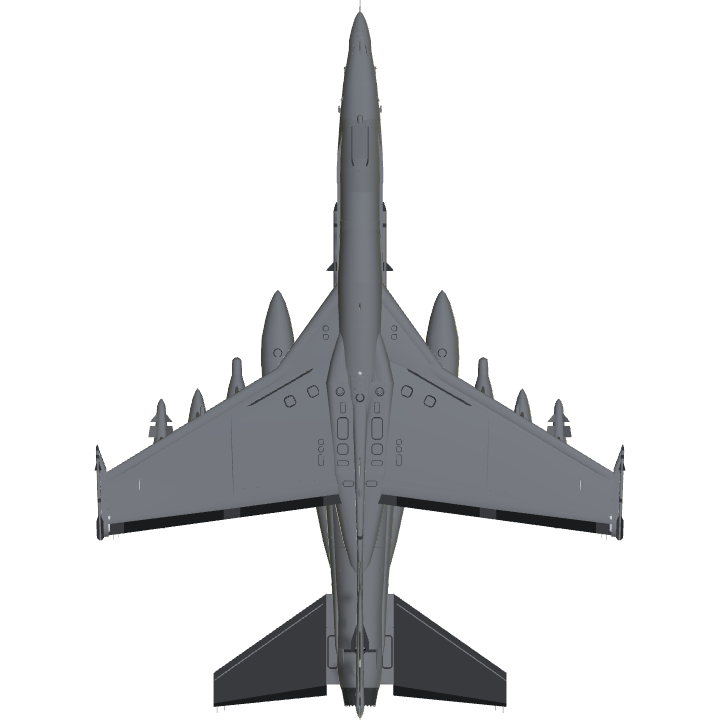 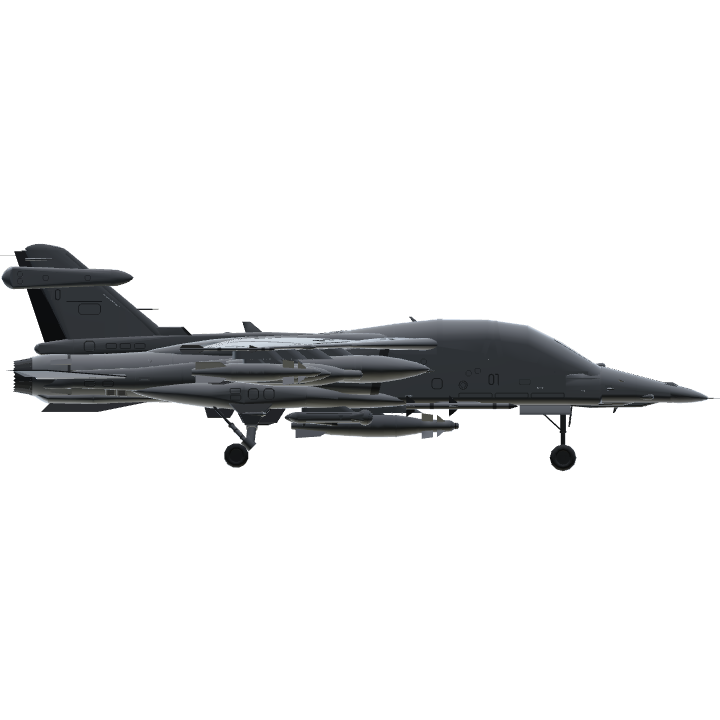 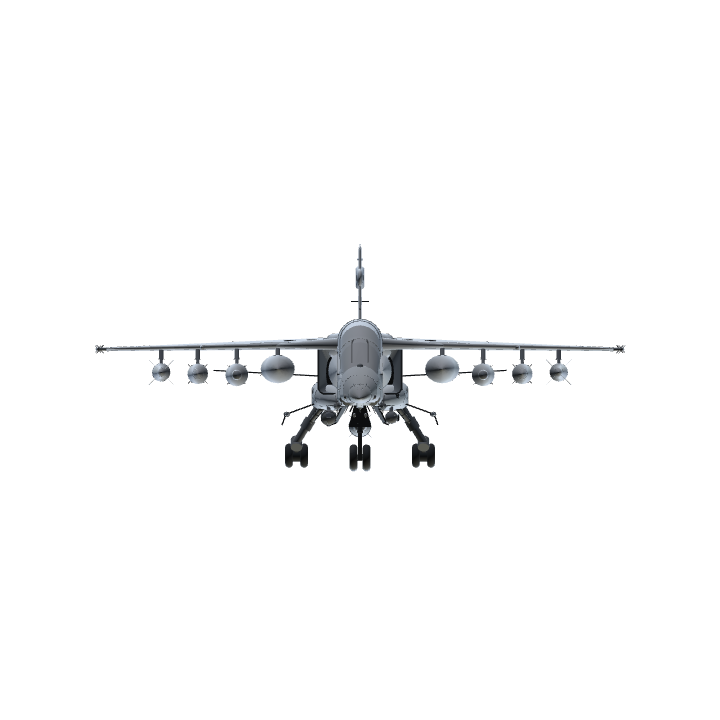