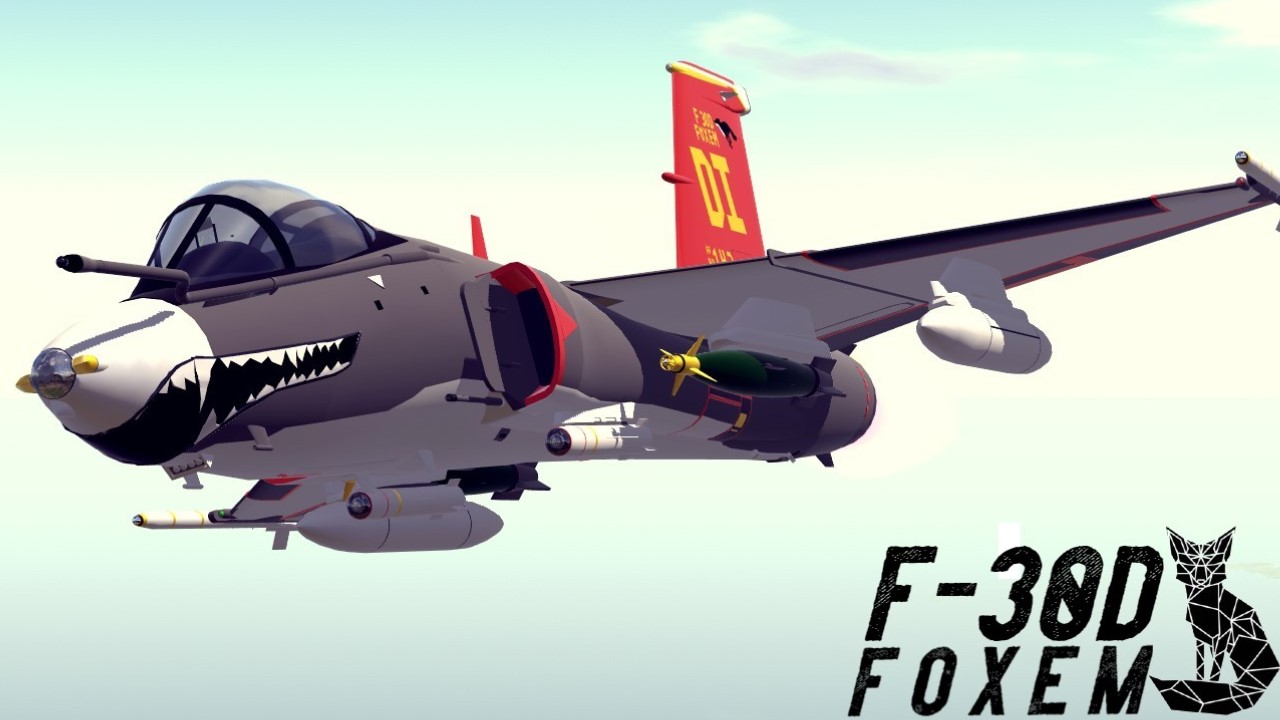 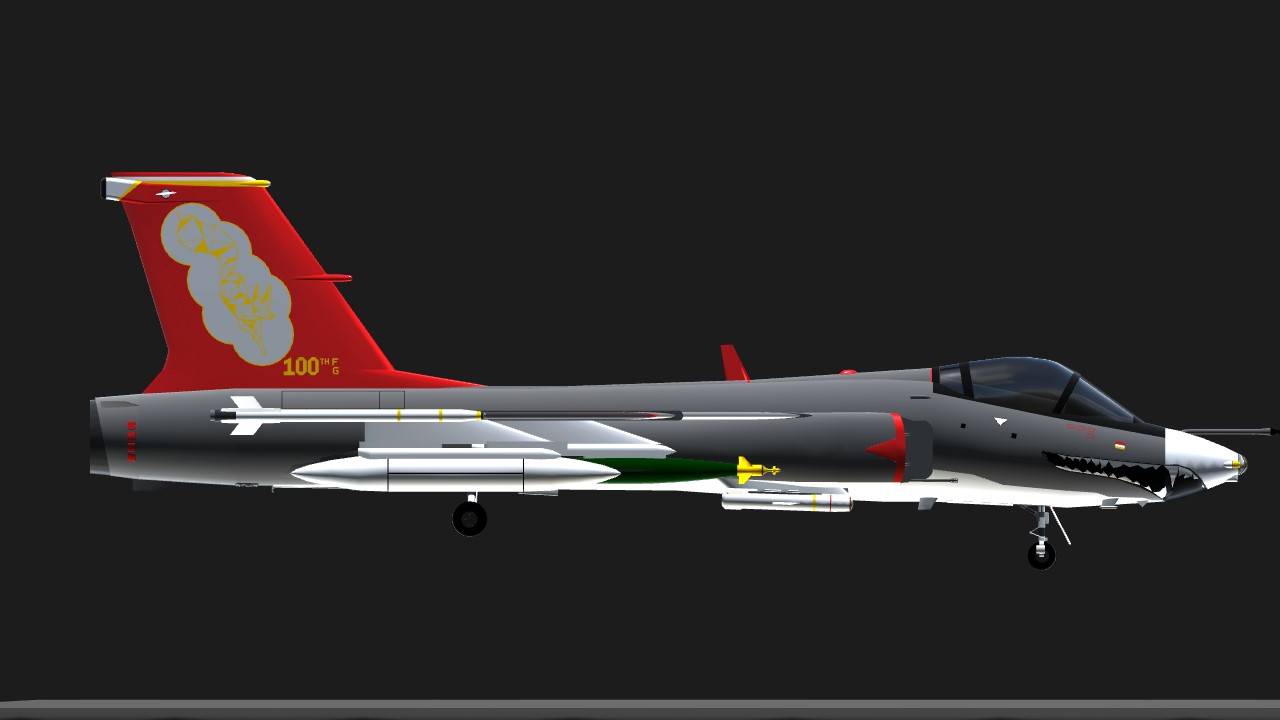 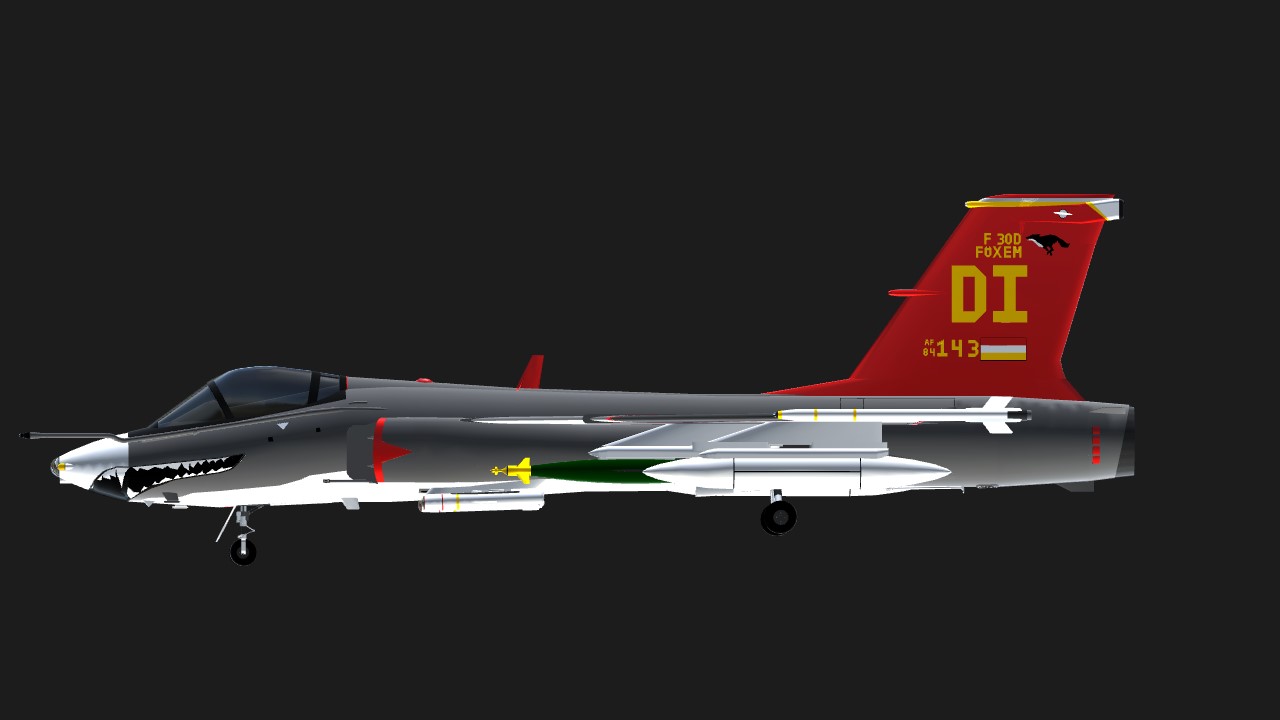 Hello there peeps, welcome to the F-30D FOXEM, finally done with this bad boy, so let’s start shall we?

As always let’s start with how to use it:

now… the fun part, this instance of the F-30D is fitted with the following:

(if you guys would like to modify this in anyway fell free to do so, also If you want me to upload my custom weapons separately be sure to tell me :>)

Year is 1957, the PAF (Poltravia Air Force) launches a contract for an STOL Multirole fighter aircraft, two companies took the challenge, LINN Aeronautics and VULPES Industries
in 1960 two prototypes were presented, the XF-29B and the XF-30A1.
LINN came up with the XF-29B the second prototype of the XF-29, a Variable sweep tapered leading edge/ Straight trailing edge aircraft, it was capable of reaching a max speed of Mach 1.4, it met the requirement of having a low take off run, but it experience severe vibrations at high speed and was hard to control when the wings were fully sweep, further more when landing it needed as much runway as a conventional aircraft, carrying less ordinance.

The XF-30A1 presented by VULPES, was a Cropped delta wing aircraft using the F-21 as its base, having a shorter take off run that the XF-29B, furthermore while being lighter and with the help of a thrust reversing system it could come to a full stop in a really short space, it had a max speed of Mach 1.2, even tho being slower to its competition it had an outstanding low speed maneuverability and it was highly stable at high speeds.
It was soon clear who the winner was and in 1963 the F-30A entered production later in 1964 it entered service with the PAF, so newer versions of the F-30 were developed:
F-30A2(1965): a slightly upgraded version of the A1 fitting a more efficient air intake
F-30B(1969): with the addition of a new Kastran J57 engine it allowed the the F-30B to reach a max speed of Mach 2, it was also fitted with a new AN/APG-35 all-weather multi-mode radar.
F-30C(1977): the C variant gave the foxem a more efficient design and an improved version reaching a max speed of Mach 2.3 and adding a fixed re-fueling probe, and the addition of a brand new AN/APG-55 all-weather, multi-mode X band pulse-Doppler radar, giving it BVR combat capabilities, the C variant was mainly used as an air superiority fighter.
F-30D/A-30A1(1984): the biggest change came in the form of the D variant, a complete redesign of the wing and tail section giving it a higher lift that previous versions improving its STOL capabilities a brand new Flamer M35-P4 Afterburning turbofan engine, even though it was less powerful then previous iterations it was more efficient, the D variant kept the AN/APG-55, while adding the Caspian MRLTD/TVTS, this brand new system gave it the ability of carrying Laser and TV guided weapons among other high precision ammunition, the new wing design also improved its carrying capacity, cause of this it was later re-designated as the A-30A1.

F-30F super Foxem(1990): the last variant to enter mass production, basing off the F-30C, this the F variant was a dedicated Air superiority fighter with super cruising capabilities, and new AN/APG- 80 Pulse-doppler radar, with a max speed of Mach 3.1, the RF-5 was based off of its design.

introduced in 1984 the D variant was mainly meant to be used as a ground attack aircraft leading to it be later designated as the A-30A1, 2 years later after its introduction it saw its first combat in 1986 at the Balnian wars, in the operation code name ‘’silencio cigarra’’, the point of this operation was to destroy enemy radar housings along the Balnian border, 3 squadrons of the 100th fighter group ‘’Golden Fox’’ were deployed, VFA-11~13, the mission suffer the lost of 1 F-30D to enemy Ground to air missiles, but successfully destroyed 8 radar housings and downed 3 enemy fighters 2 of this kills were attributed to pilot Jimmy Wien, 8 out of the 9 aircraft deployed returned home marking the first victory for the the PAF in the Balnian wars, during the war the F-30D proved its worth completing its missions successfully almost every time, it was adored by the pilots due to its easy handling and praised by the mechanics cause how easy it was to maintain, pilot Jimmy Wine marked another 11 victories on board of the F-30D till its sudden disappearance over the Malkia border in 1999 on board of his beloved aircraft AF84143.

Song I liked the most while building it

Special thanks to Thelegitpilot13 who helped me a lot with the landing gear mechanism! 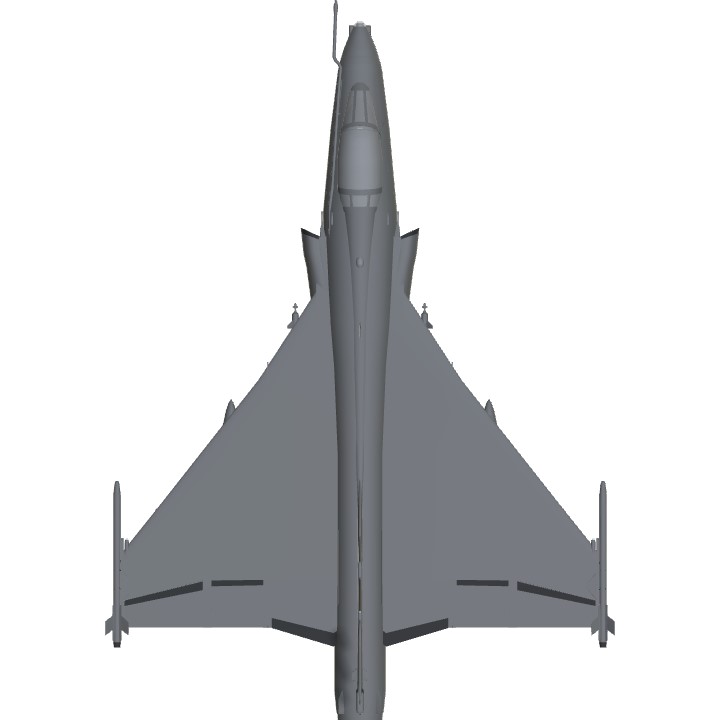 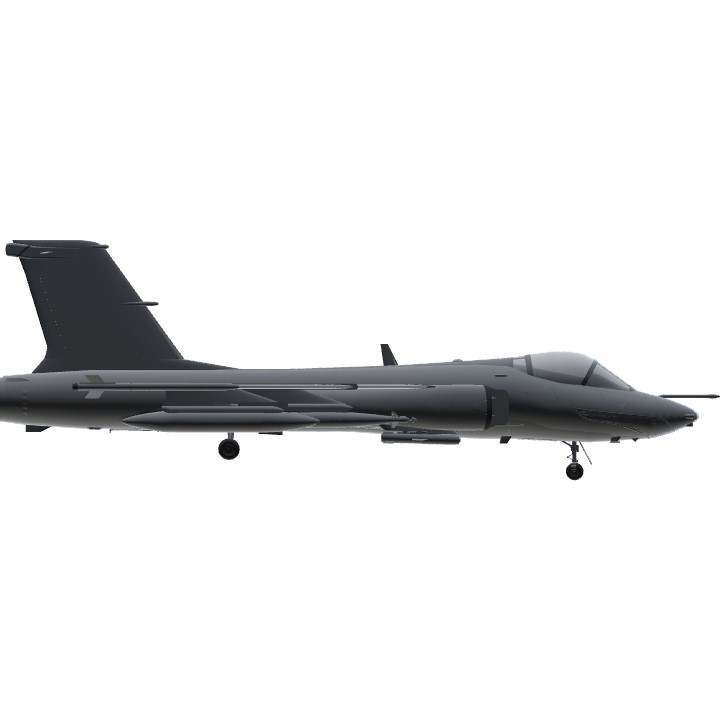 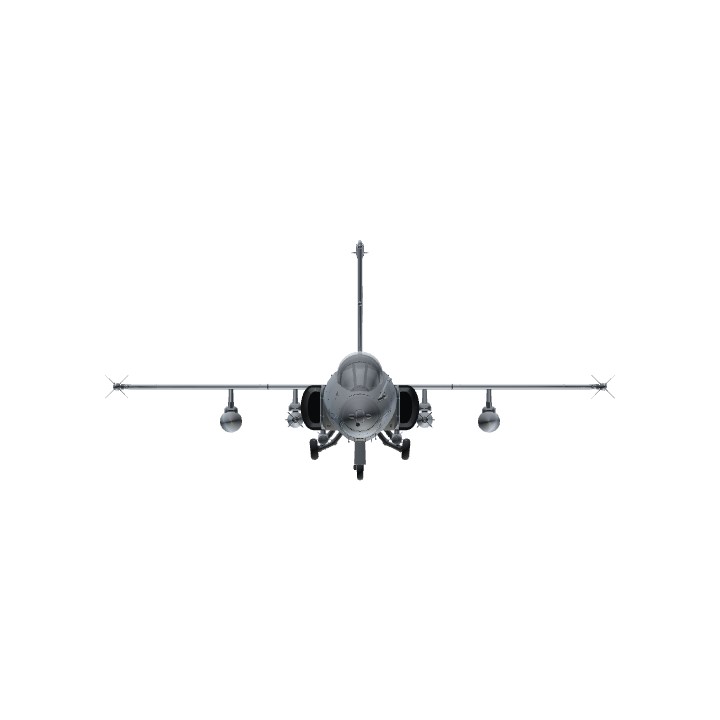