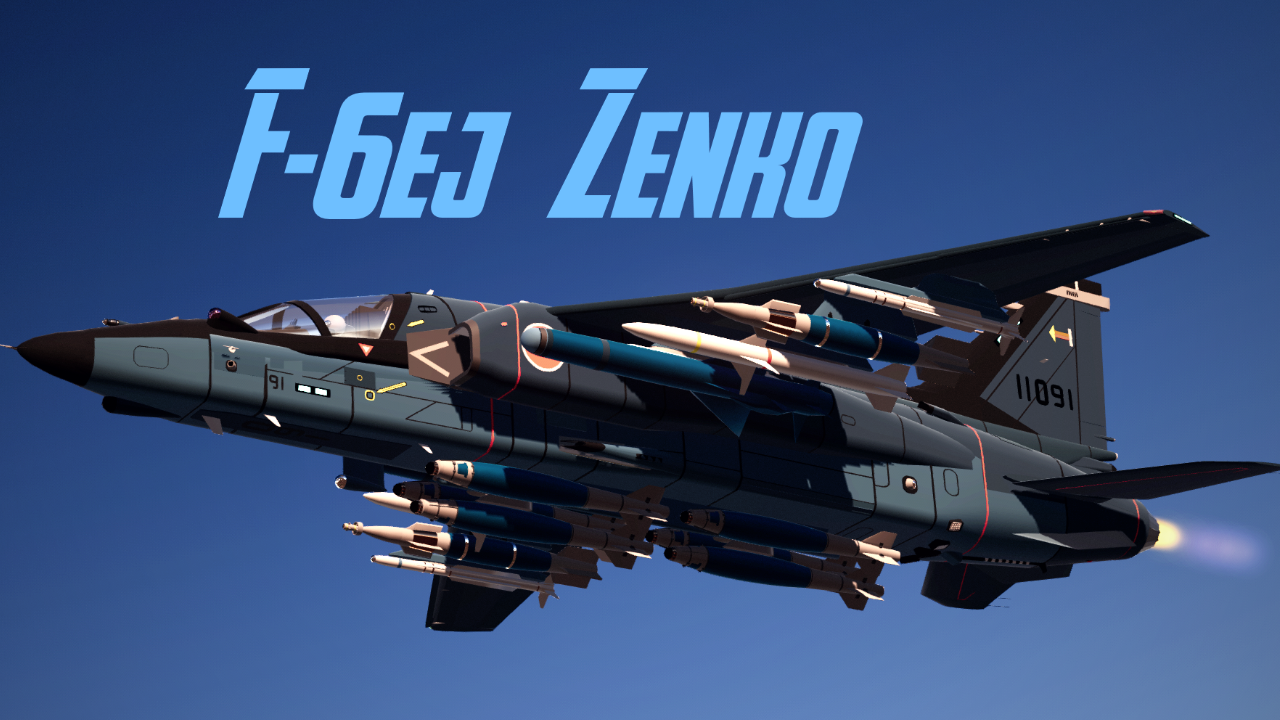 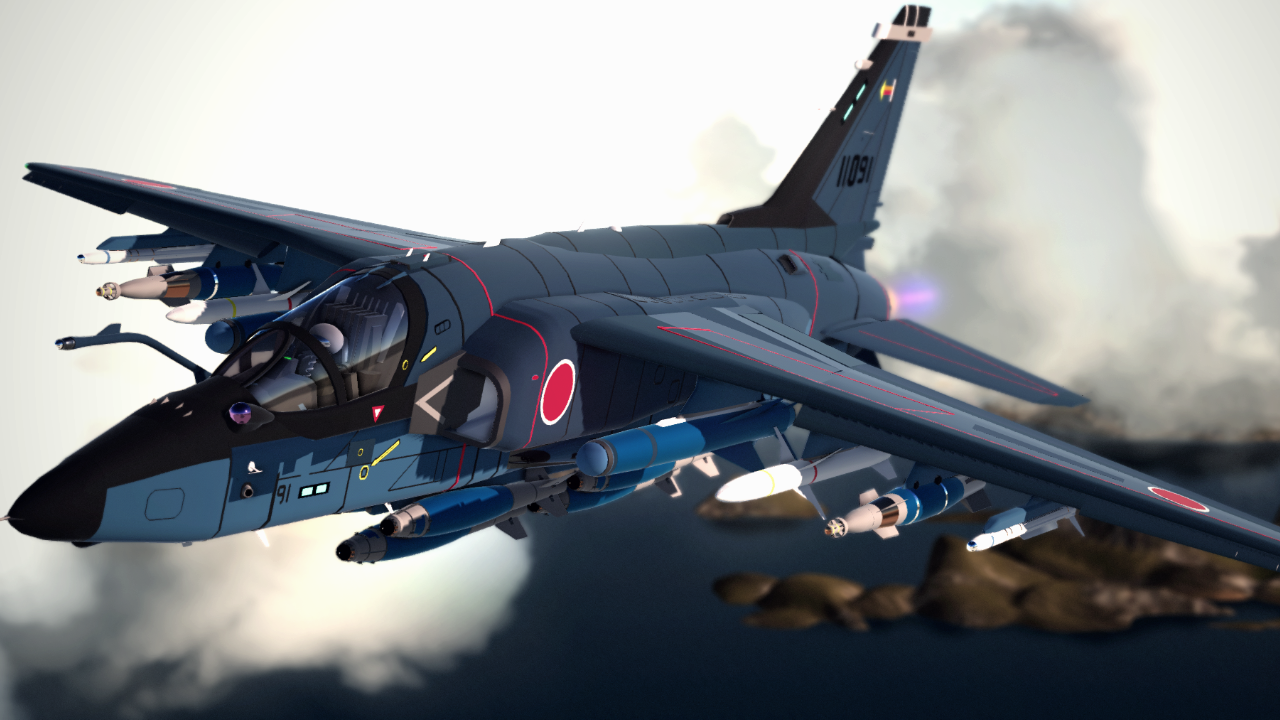 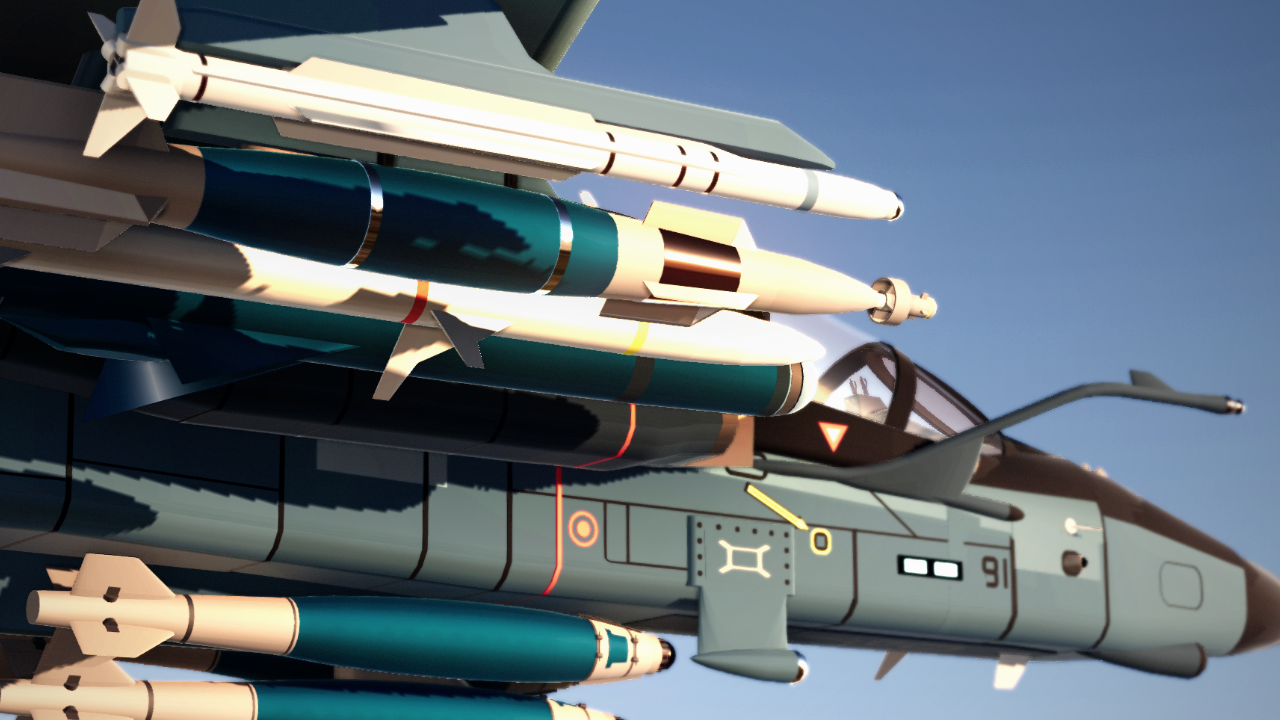 NOTE 1: Speedbrake [AG1] is automatically retracted when Gear Down, IAS < 200kts and 100% Throttle is applied – GO AROUND MODE

NOTE 2: FLAPS are manually controlled but automatically limited for optimal efficiency depending on aircraft configuration, weight and airspeed.

NOTE 3: The aircraft is NOT carrier-based and it is un-suitable for carrier deck operations. Proceed at your own risk while executing a carrier landing approach procedure and ONLY AFTER having jettisoned ALL the under-fuselage payloads.

IMPORTANT NOTE: This plane has been built using a series of complicated and inter-structural Funky Trees™ codes for realistic handling behavior and has been thoroughly flight-tested using a Saitek P2600 Rumble Force Gamepad for detailed controlling and it is highly encouraged to use a gamepad, joystick or mouse-as-joystick mode for flying it. • All weapons have realistic dimensions, specifications and flight behavior
• Target always IN FRONT & SLIGHTLY BELOW AIRCRAFT’S LINE OF SIGHT
• DO NOT fire any weapons at speeds below 100kts or at extreme sink rate
• IT’S NOT ADVISED TO JETTISON EXTERNAL STORES UNDER NEGATIVE HIGH-G LOADING & AT SUPERSONIC SPEEDS (>650kts TAS) This bomb is a guided munition and NOT a stand-off weapon
which means that it uses the kinetic and the potential energy of the aircraft
and it doesn’t have any propulsion system. Higher and faster release guarantee
better target hit possibilities.

This bomb is a guided munition and NOT a stand-off weapon
which means that it uses the kinetic and the potential energy of the aircraft
and it doesn’t have any propulsion system. Higher and faster release guarantee
better target hit possibilities. The Fuji/Harpia F-6EJ Zenko is a supersonic ground attack and maritime strike variant of the F-6C/D Tengu fighter jet that was developed in mid 80s as a domestically designed fighter for the all-weather ground attack role. The F-6 has entered in JASDF service in early 1990s and started replacing the previous indigenous F-1 fighter jet in the ground attack role. Rising tensions in the area with PRC and N. Korea led the Japanese MoD to launch a highly ambitious program of massively upgrading the F-6 fleet to the EJ standard and giving the type extensive maritime strike capability, modern avionics and further weapon availability. The whole project has been internally designated as “Blue Samurai” in an effort to divert any foreign attention from the program and avoid industrial espionage attempts.

HarpiaDS has been highly involved in the initial F-6 program, providing important sub-systems and helping in the designing phase by borrowing elements from the A-38C SkyFox attack jet. The Japanese Government awarded Fuji Heavy Industries the contract for the F-6 construction, with HarpiaDS as a major sub-contractor and R&D partner. Many Japanese manufacturers have provided crucial parts for the completion of the “Blue Samurai” project and ensured the domesticity of the production. 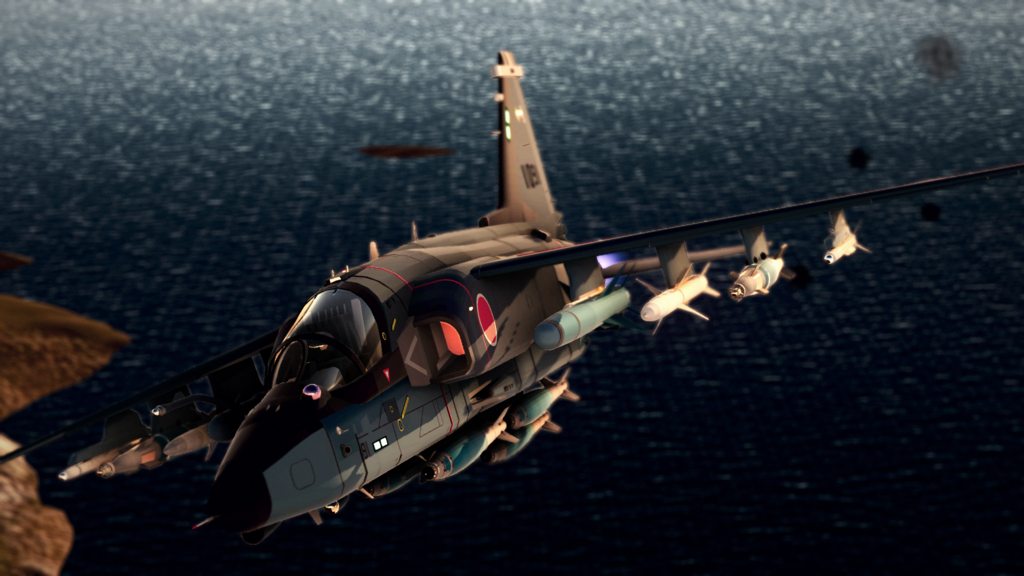 The new variant had a supreme performance due to the powerful F110 engine and shared a lot of common systems with the F-2 Viper Zero for lower cost and better maintenance sequence. The flight tests have been completed in early 1999 and by 2000 the F-6 squadrons started receiving the new F-6EJ Zenko aircraft. In the coming years, many modern Japanese and US made weapons have been certified and integrated in the new aircraft and especially the ASM-2 anti-ship missile and the HARM missile. This way, the F-6EJ became a capable SEAD/TASMO aircraft and a vital part of Japan’s air defense system. 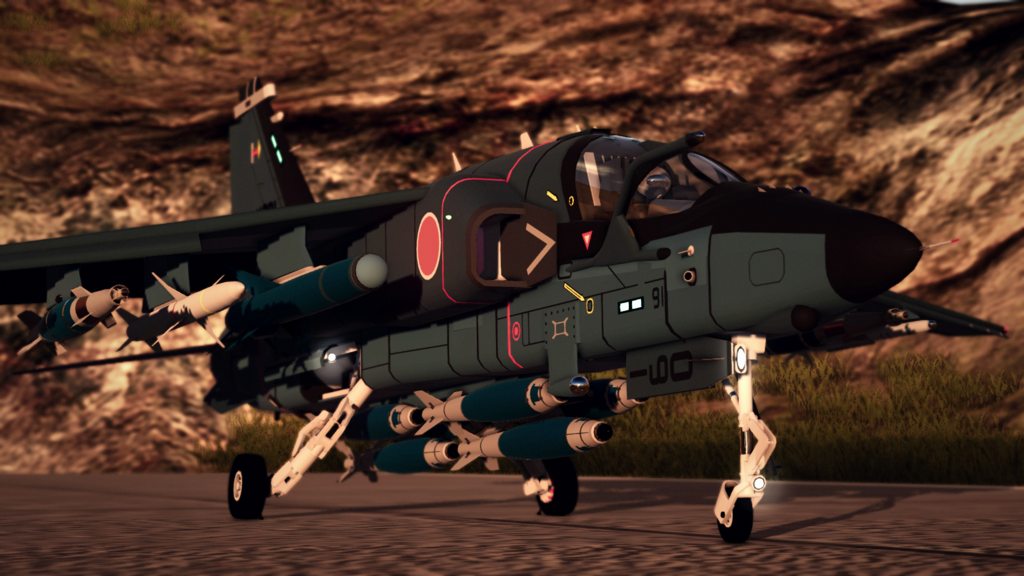 Many thanks to @232287168147825 for the breathtaking pics and to all the SPMC community for the useful advices and the general support! 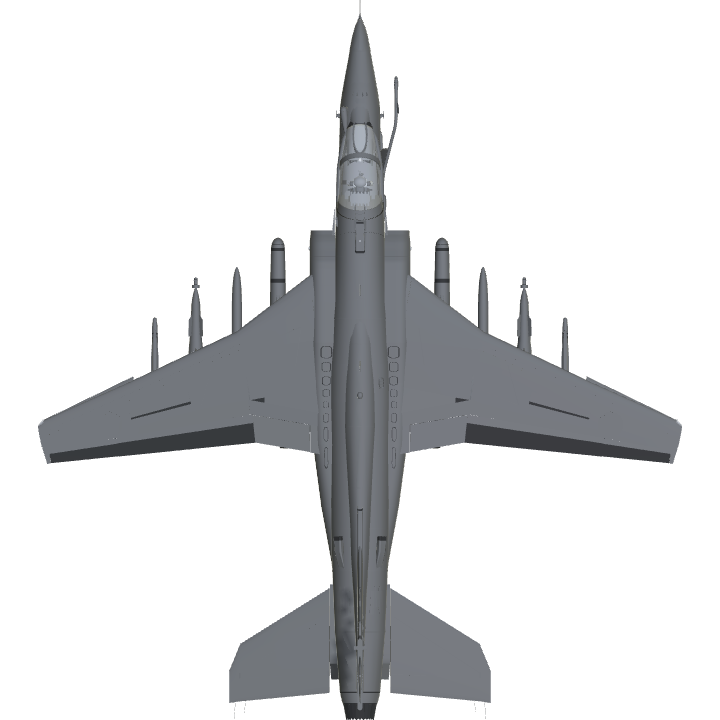 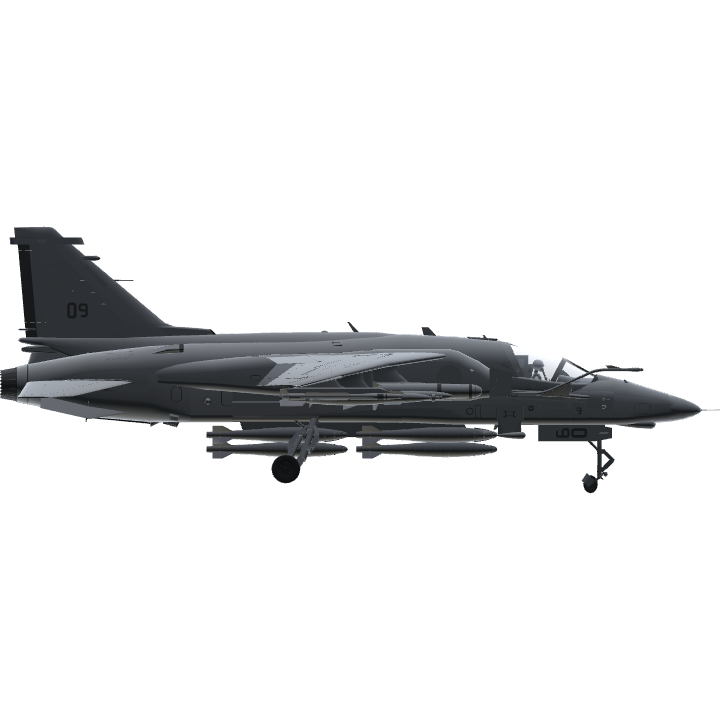 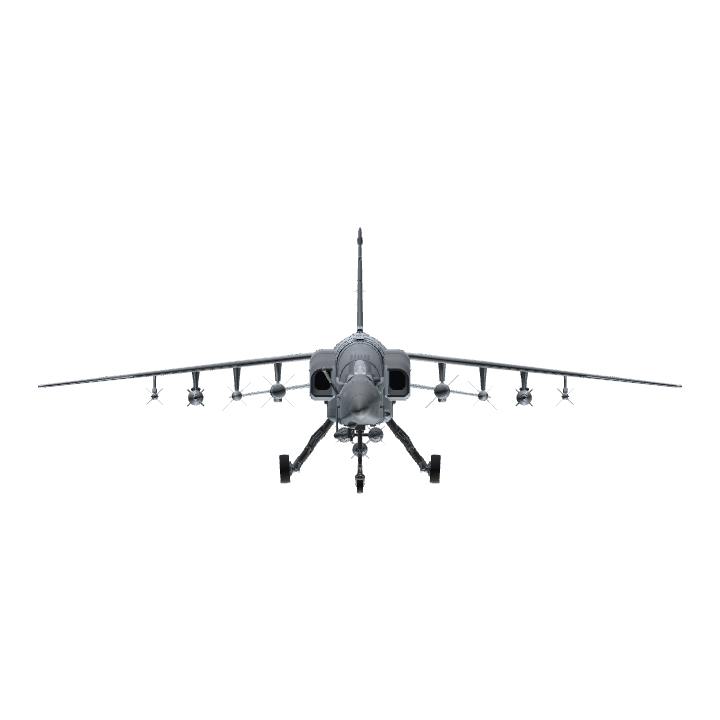