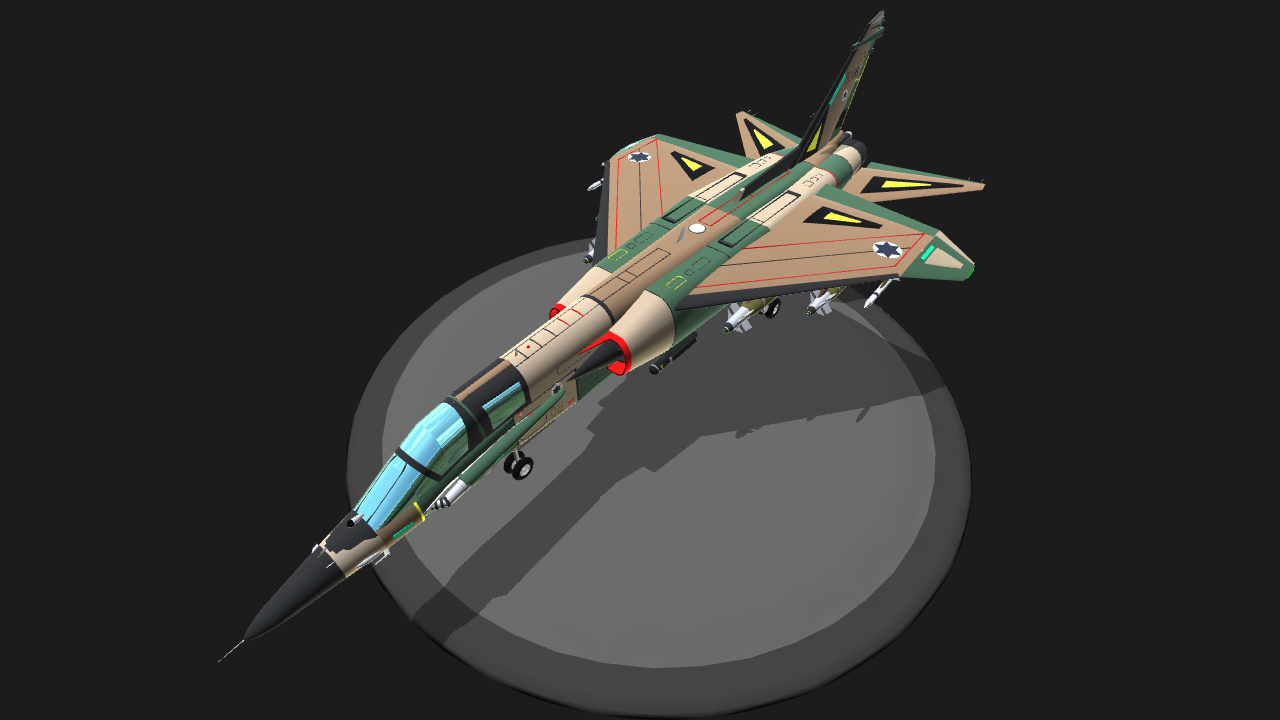 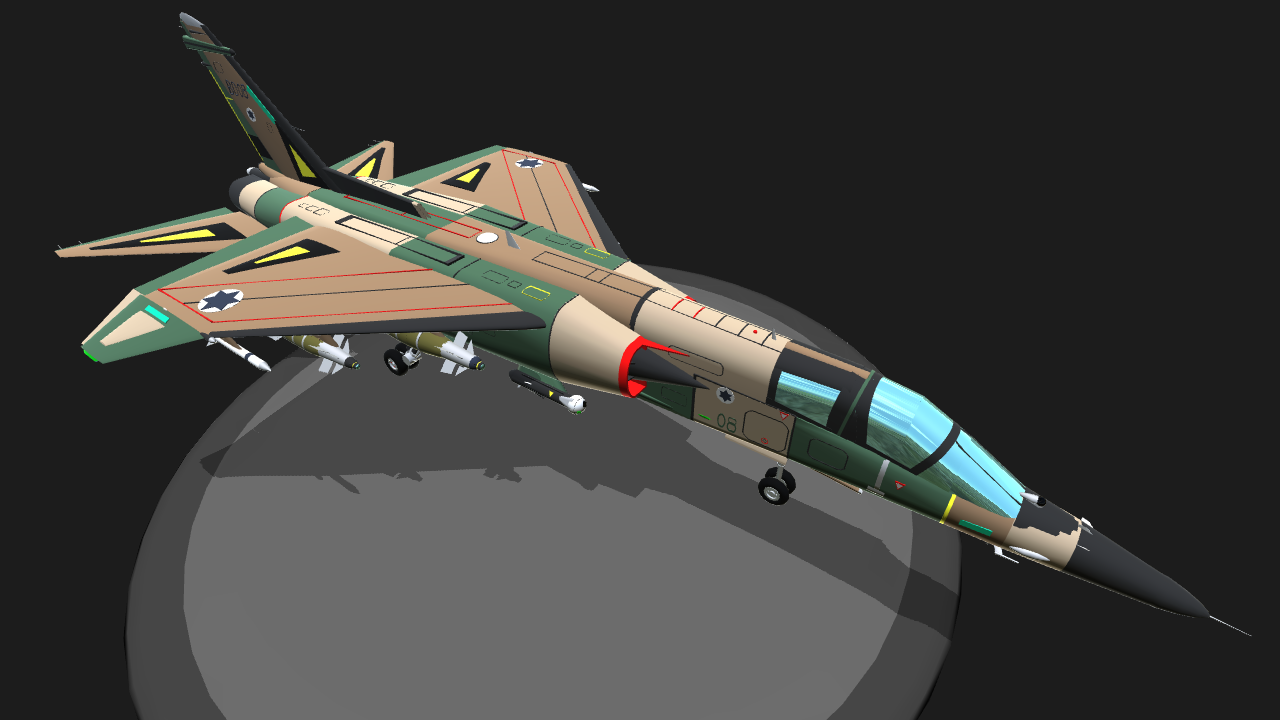 After the successful completion of operations Opera and Wooden Leg in early 1980’s, IAF target assessment reports have ascertained that Israel needs a Long-Range Strike Aircraft, with increased weapons and fuel payload and capable of executing advanced air-to-ground missions at extended combat range and in standalone operation profiles. All of these reports have been gathered and implemented in 1989 as a Request for Proposal (RfP) to all major aeronautic industries which supplied Israel with combat aircrafts. Until then, all IAF air-superiority F-15s and F-16s were used in tactical strike missions and have been extensively upgraded to carry a wider range of air-to-ground armaments, including JDAM GPS-guided bombs and the Popeye missile.
BAe and HarpiaDS responded to this RfP with a proposed upgraded variant of the RAF Stingray S3 strike fighter aircraft, which has been designated as F-177I-C1-LRA in company’s internal designation system. The F-177I variant is a dedicated twin-seat and twin-engine strike aircraft and the newest and most capable member of the Cyclone attack aircraft family. It can be visually differentiated from the other Cyclone aircrafts as it is longer, has bigger nose radome, simpler landing gear and larger wing area with different pylon installments. Also, it has a dorsal air-intake in the root of the rudder wing and two smaller air-intakes in the front section for extra avionics cooling. The conglomerate committed to deliver 40 airframes with basic wiring; AFCS and engines installed in a period of 2 years after the signing of the contract and granted industrial permission to IAF for the incorporation, into the F-177I airframe, of any Israeli-made system. The proposed variant was exclusively including:
-Retrofit of the previous Rolls-Royce Prometheus TF645 engines with newer Pratt & Whitney F100-PW-220/220E engines with improved fuel consumption, modern FADEC and greater acceleration rates but lower thrust and thus lower speeds. This way, IAF could achieve engine commonality in its whole fighter fleet (F-15, F-16 and F-177).
-Incorporation of modern IAI EL/M-2042 Advanced Multimode AESA Airborne Radar, specially designed for air-to-ground target acquisition up to 120NM. The EL/M-2042 greatly enhances target capabilities of the aircraft and enables long-range target detection and tracking for weapon delivery or automatic target acquisition in air-to-air combat profiles. In Air-to-Ground missions, the radar provides very high-resolution mapping (SAR-Synthetic Aperture Radar), surface target detection and tracking over RBM, DBS and SAR maps in addition to A/G ranging. In Air-to-Sea missions the radar provides long range target detection and tracking, including target classification capabilities (RS, ISAR).
-Upgraded avionics, sensors, IFF, tactical data links and weapons management and delivery systems provided by Elbit Systems
-Increased payload and fuel capacity due to use of advanced composite materials.
-Re-designed, simpler and lighter landing gear
-Reinforcement of the main wings for increased payload carriage and low-level flight
-Re-location of the upper-wing pylon to the outer under-wing position
-Certification of carriage and firing of any IAF munition (air-to-air and air-to-ground)
-Equipment with sophisticated combat support electronic systems, such as:
- ELL-8551 – ADAJAS - Advance Airborne Jammer System, which is an advanced EW system that suppresses all types of enemy Air Defense Surveillance and Fire Control Radars along the mission flight path and is designed to provide complete Airborne Electronic Attack (AEA) protection.
- ELM-20900 - DTP - Digital Targeting Pod. The RTP is a complete E/O and IR, all-weather, autonomous real time system which can provide high quality digital imagery of ground targets and terrain from stand-off ranges, even throughout clouds, rain, fog, battlefield smoke and man-made camouflage.
Israeli government decided after a period of extensive negotiations with major US, French and British aeronautics industries to procure a fleet of 45 F-177I’s by the BAe/HarpiaDS conglomerate with increased industrial involvement of IAI and Elbit Systems. The official contract has been signed in June 1994, between the Israeli and British government, and was dubbed as “Project Jethro”. By the end of 1997, the 45 F-177I airframes have been delivered to IAI facilities and in April 1998, the first of the three F-177I Squadrons became operational. The F-177I aircraft received the Hebrew name “Lahav” in IAF service, which translates into “flaming blade”. Since then, the F-177I Lahav took part in many long-range air strikes and received many avionics and weapon systems upgrades and has been certified to carry all the current air-to-ground weaponry of IAF, both free-fall and standoff/precision guided munitions. During the early months of 2010, the F-177I Lahav, became the first IAF aircraft to successfully fire a GBU-86 Bulldozer precision-guided munition against Houthi targets in Northern Yemen. The GBU-86 Bulldozer and the GBU-66 Barrage bombs are part of Rafael/HarpiaDS commonly developed guiding kits for 1.000 and 2.000lbs free-fall bombs which include both GPS/INS guidance and IIR target acquisition capability with ranges up to 80km. 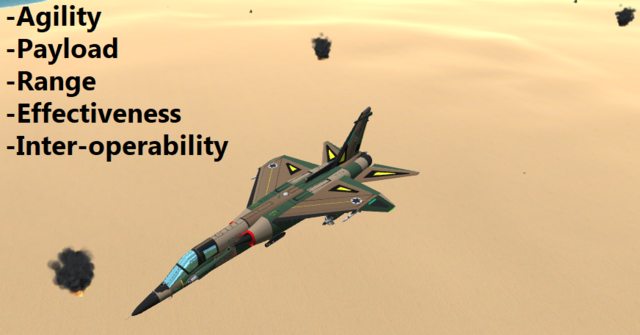 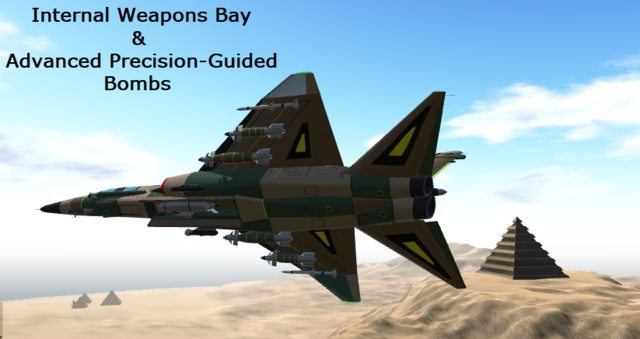 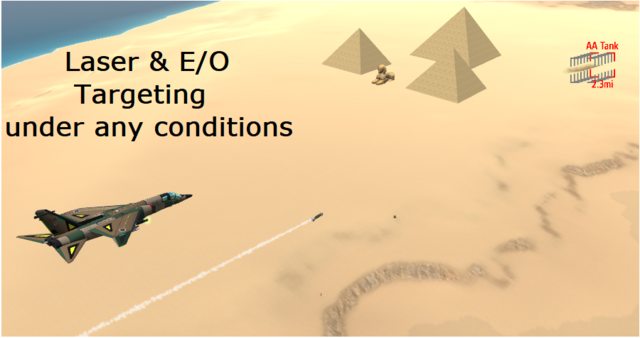 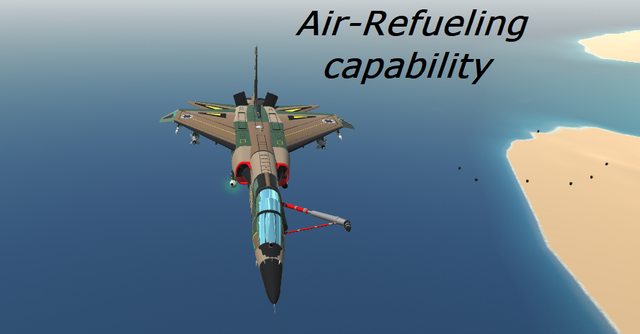 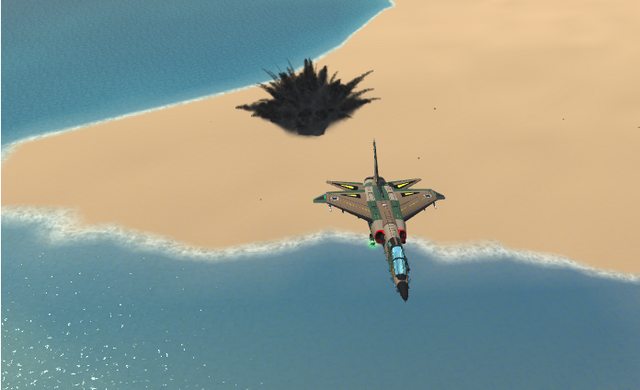 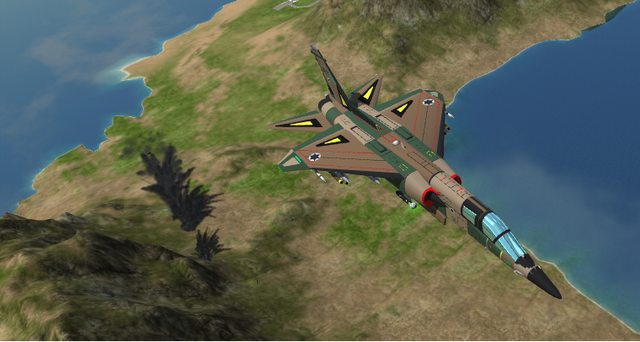 -Reduce Airspeed at 300mph and below
-Align with Runway at 1.500 ft Altitude and 2NM distance
-GEAR DOWN
-THROTTLE: 8-15% (depends on weight)
-AG2: Activate for Gyro-stabilization
-TRIM: FULL DOWN gradually
-VTOL: FULL DOWN gradually
-Establish reasonable Rate of Descent
-Airspeed 180-220mph (depends on weight)
-Make corrections using small THROTTLE movements (~1-2%)
-Maintain Attitude 1°-3° Nose Up
-At Touchdown: THROTTLE – 0% AND AG4 for Drag Chute
-When all wheels on ground and airspeed below 150mph - APPLY FULL BRAKES

Many thanks to Itamar3553 for helping me to find the correct Hebrew words for naming the aircraft!
It is highly recommended to download and use the Units mod by mushr0om for obtaining useful info during landing and/or flight. 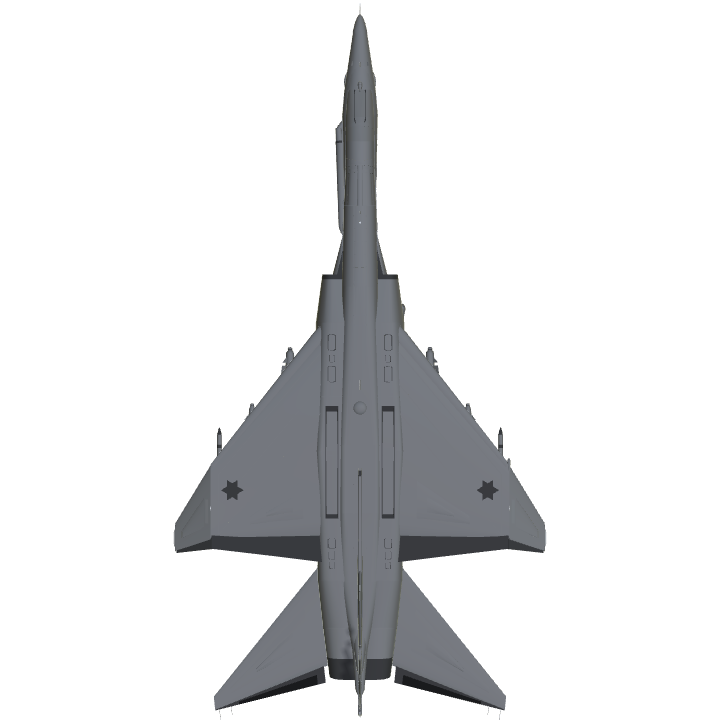 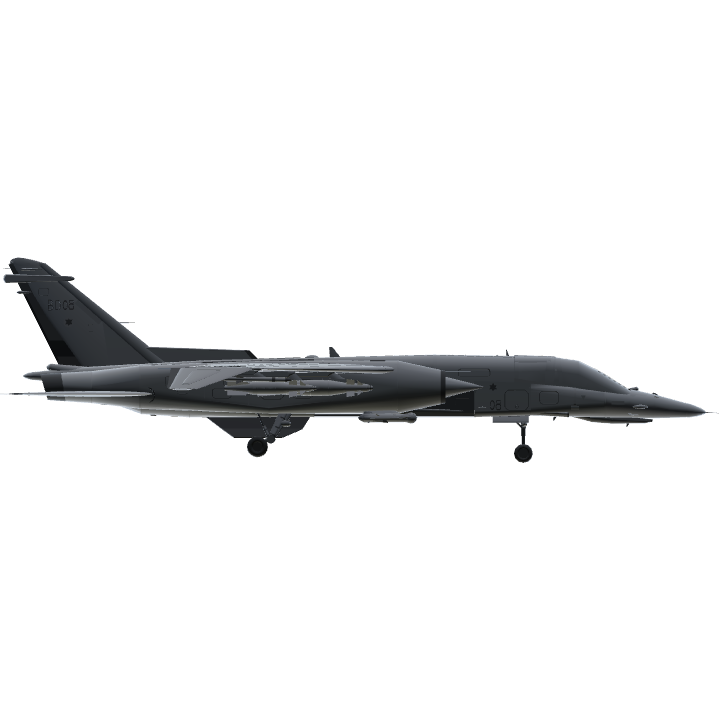 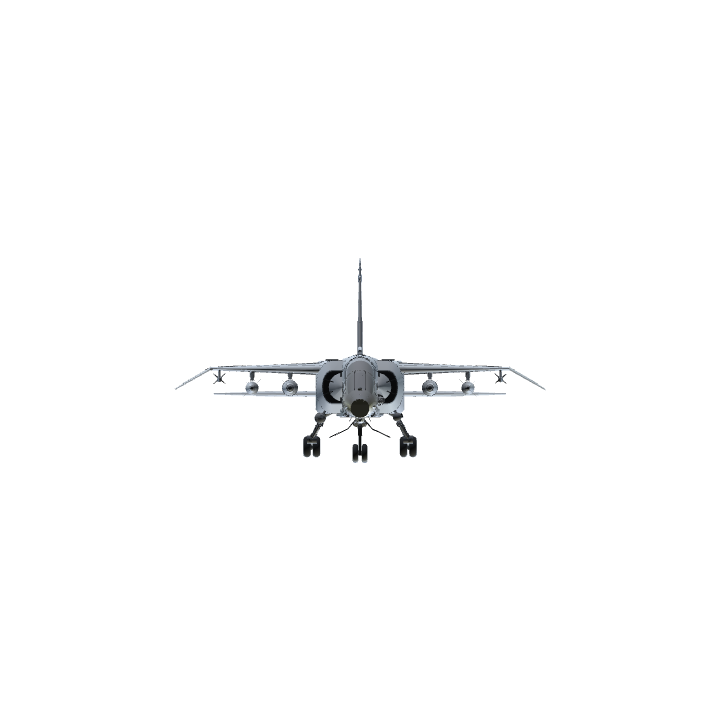