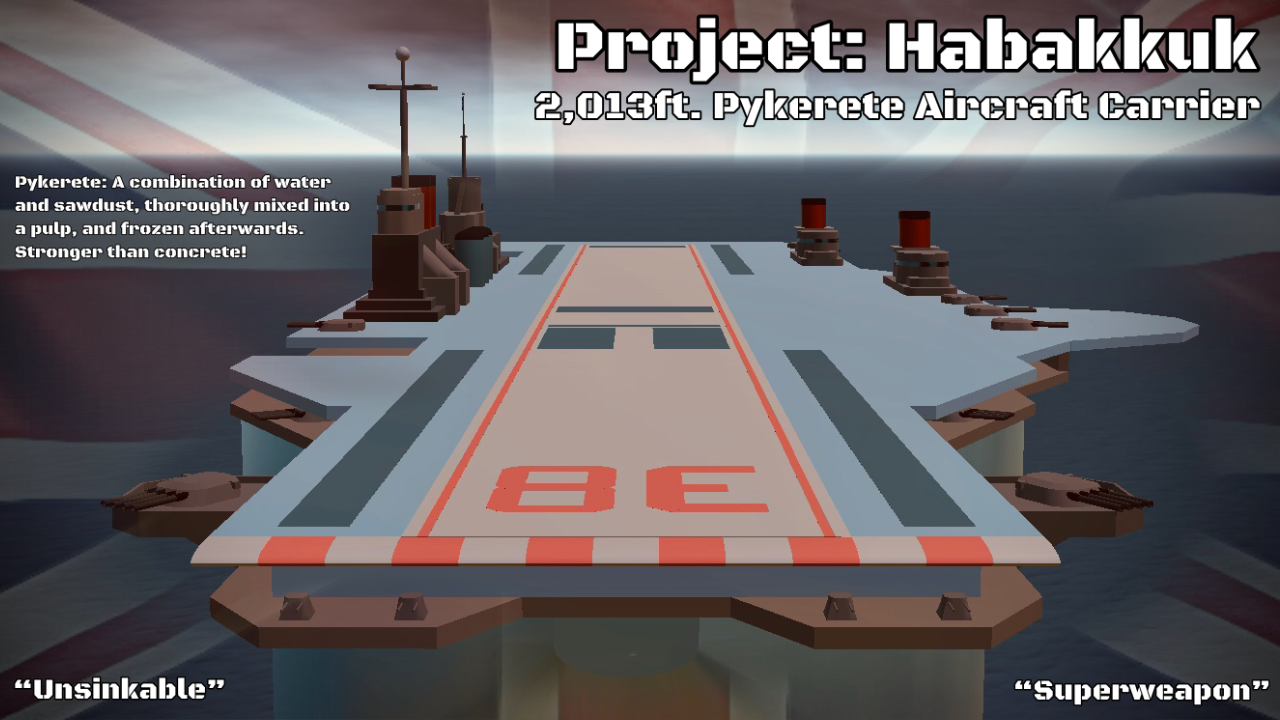 Project Habakkuk was an experimental concept of utilizing a strong new material, Pykrete, to build what would be a 2,013ft. long aircraft carrier. However, the concept never made it off the prototype stage, a small house-boat looking vessel made with the Pykrete. It did indeed, however, float very nicely, and it stayed floating for a couple years before the Pykrete structure started to melt enough for it to sink.

Pykrete is an actual material, a combination of Water and Sawdust, a 6:1 ratio respectively. This concoction is mixed into a sort of paste-like substance, and then frozen afterwards to give it the solidity it needs. The resulting construction material, Pykrete, is stronger than concrete, and can withstand a gunshot with relative ease.

Anyway enough history bullshit on Pykrete and the backstory of the Habakkuk, here’s a ”totally realistic” concept image of it, along with screenshots of it in-game:

The actual Pykrete material is a sort of whiteish beige color, as a result from the Ice and Sawdust. But since this is SimplePlanes, and realism is not a necessity, I made it look sorta like the concept art. I actually based the entire deck of this thing off the concept art, simply because I thought it was cool looking, (no pun intended lol) and there’s no actual images of the Habakkuk, as it was never made.

Controls: the controls are very simple; Throttle to go forwards, Yaw to turn left and right respectively, and if you need it, AG-1 to stop instantaneously; much like my Tic-Tac UFO, this creation can stop instantly with the press of a button. I did this because of complications with mobile; due to the fact that anything larger than 2,200ft. in length, width, or height, will instantly crash the game, even with every single parts’ drag calculations set to false, and drag scale set to 0, even though I can still run creations with much larger dimensions that I didn’t make, such as Moderator Squirrel’s AS-S-8 Apocalypse Class Submarine, which if you didn’t already know, is roughly 5,000ft. in length, more than twice that of my Habakkuk, I had to utilize some interesting methods of getting this thing to stop moving. This entire creation has 0 drag, meaning that without these features, it would never stop accelerating and would have a hilariously unrealistically fast top speed. So in order to combat this, I used some ridiculous airbrakes that are constantly activated, and when the carrier moves fast enough, these airbrakes apply drag to the carrier, without any “actual” drag! (you can remove drag calculations and drag scale from airbrakes, and they still slow down your aircraft when you use them!)

However, I’ve noticed that even without using the instant stop feature to prevent the Habakkuk from bobbing up and down weirdly, if you throttle up, it levels out eventually, so the AG-1 feature is usually unneeded.

A feature of this creation that I wanted to focus on was weight: Now, the weight of this thing in SimplePlanes is nowhere near close to what the Habakkuk’s actual weight would’ve been, but it’s still heavy enough to bear the weight of most creations that land on it, and it can even ram through other creations with ease. In fact, I have even seen it ram into the USS Beast, and it actually moved the Beast off of its sailing path, and pushed it hard enough to make it go faster than usual!

Anyway, I think I’ve listed enough for now, so without further ado:
Have Fun! 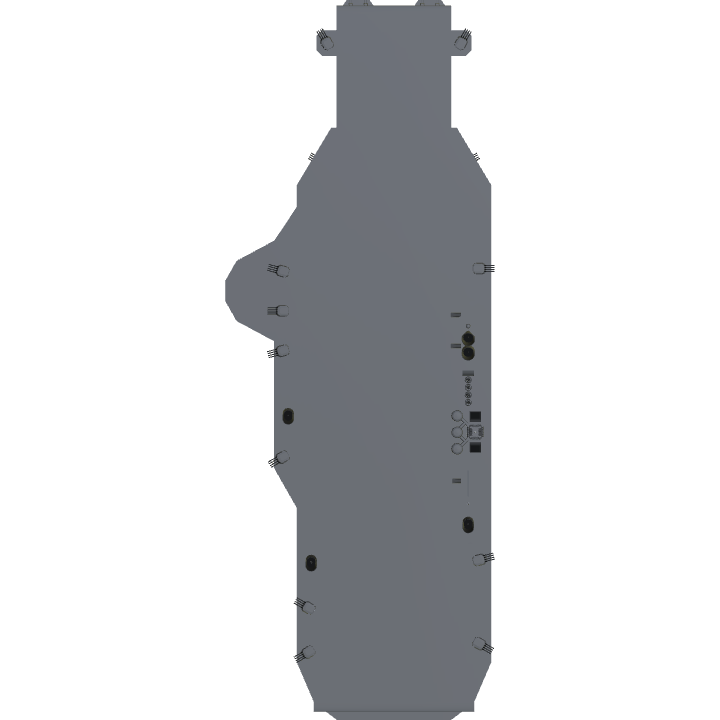 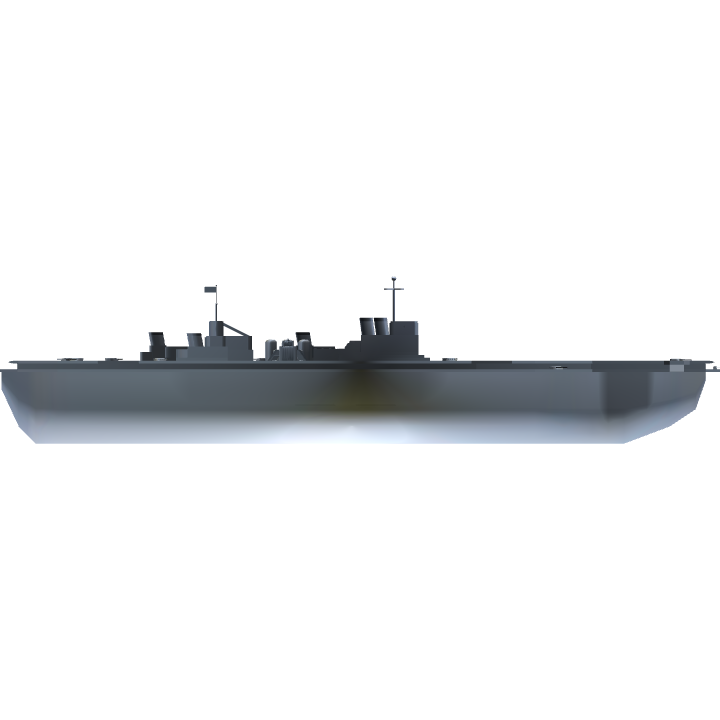 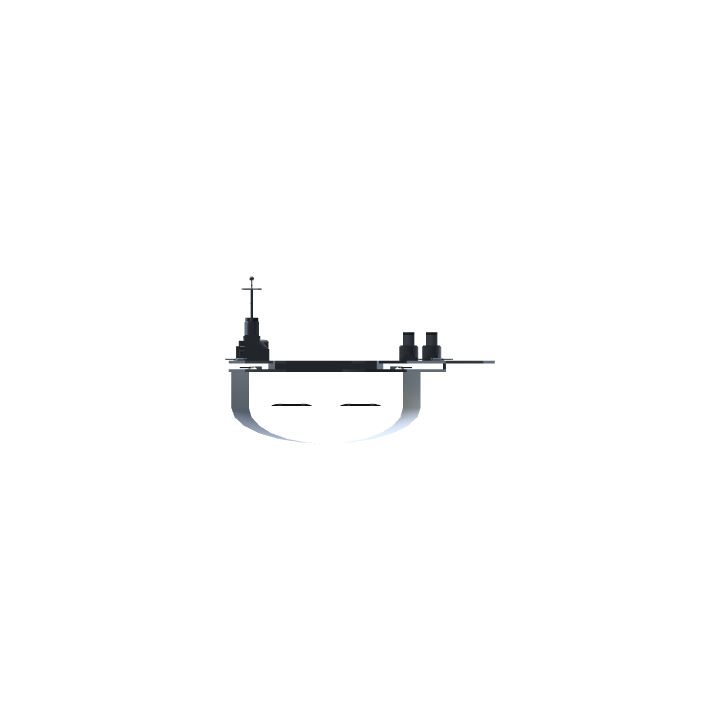