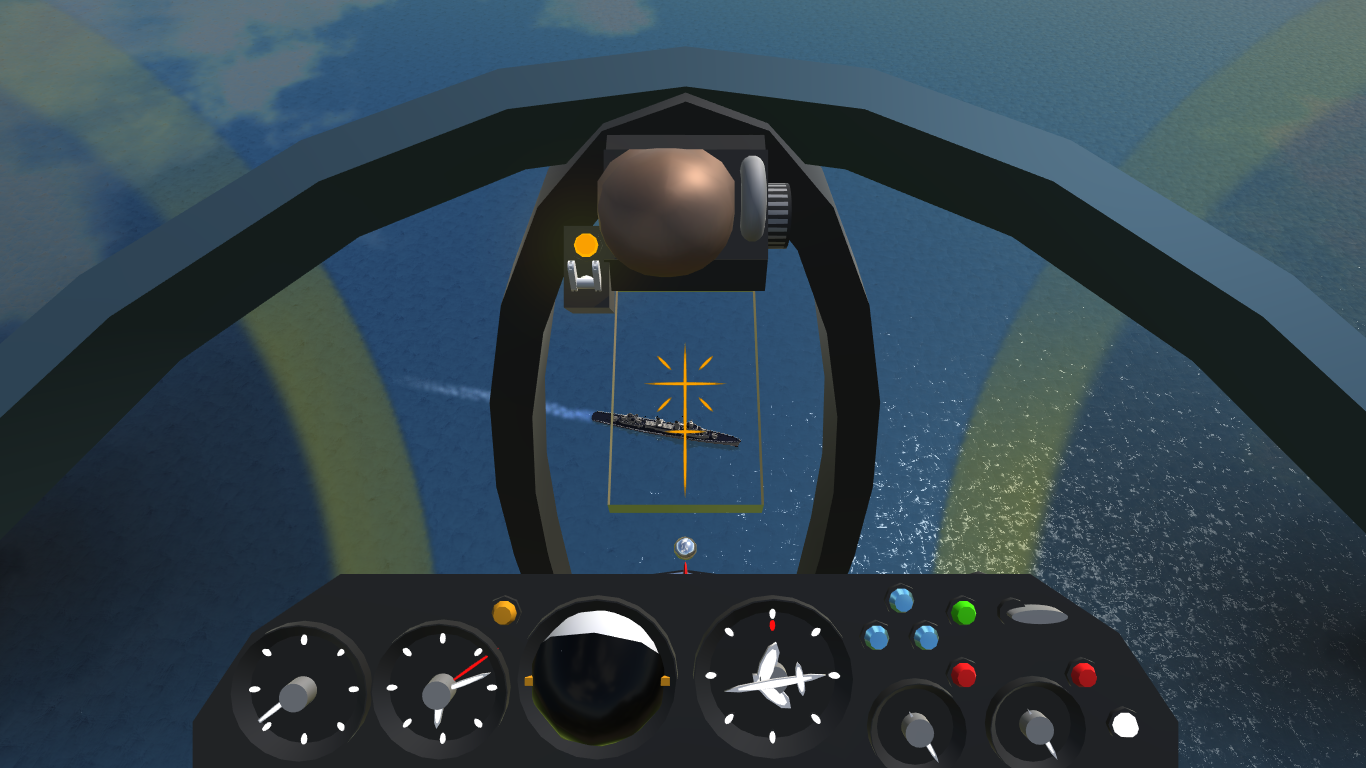 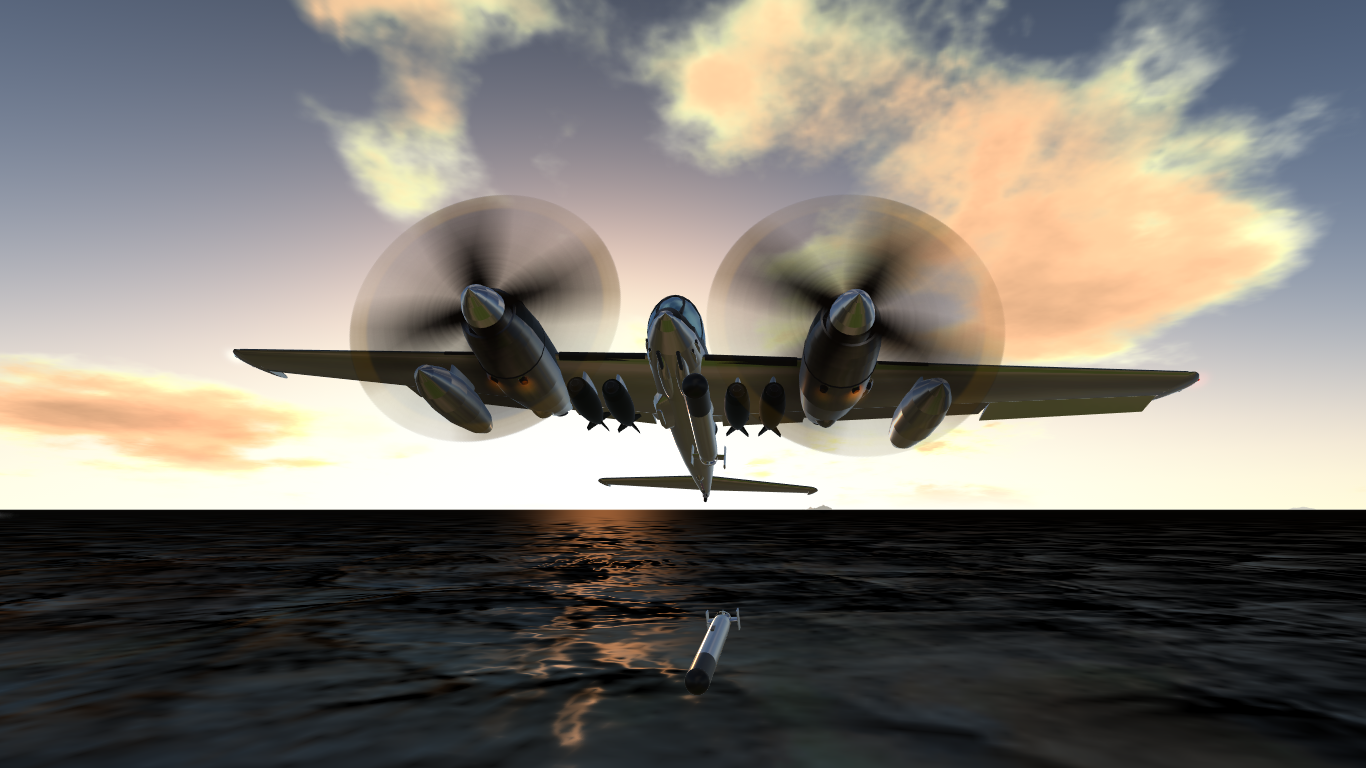 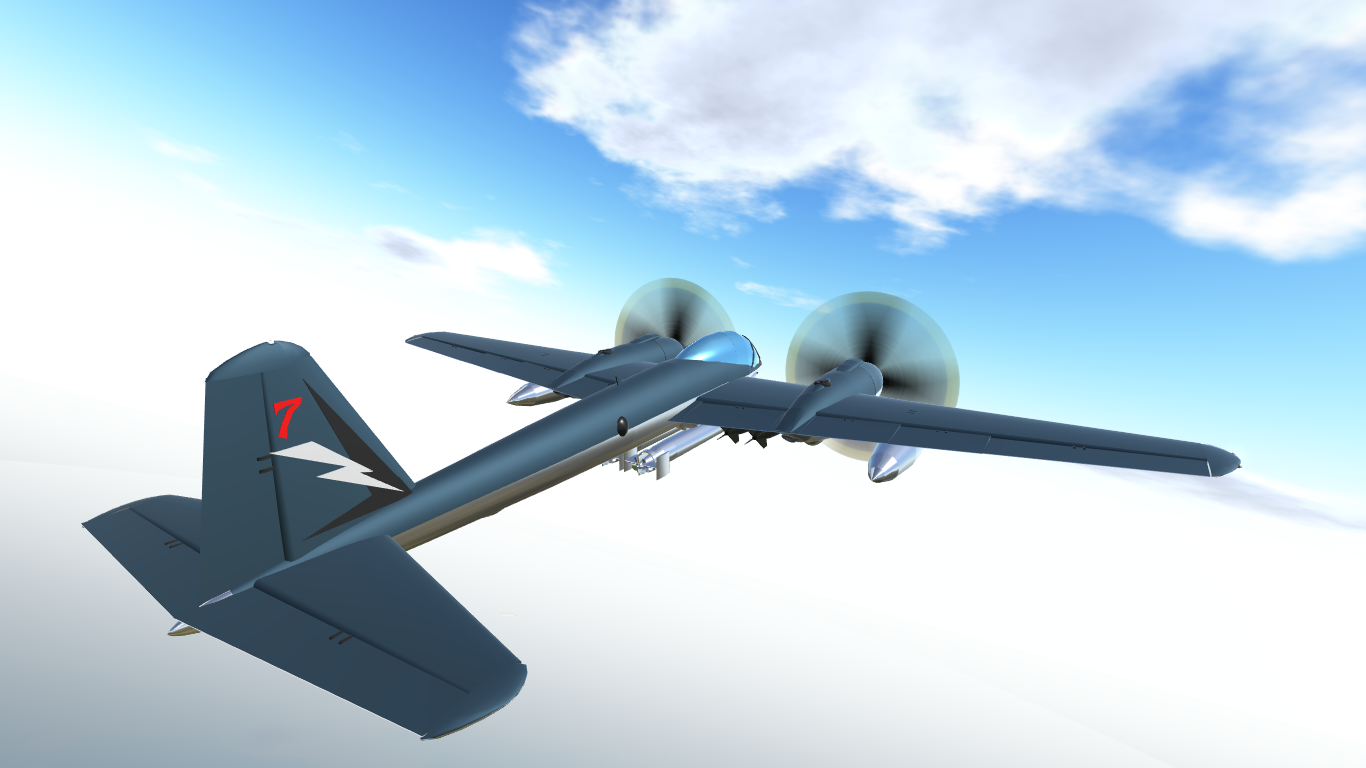 LOWER PART COUNT/ALTERNATE "PROTOTYPE" PAINT SCHEME VERSION HERE - 332 parts. Maintains all functionalities except for the custom torpedoes (and the reconaissance cameras, which were a last-second addition).

EDIT: I have spotted a small issue with this plane. After I added the tail markings, an attachment issue caused the cosmetic rudder to not turn - this does not affect the performance of the plane, but if it irks you, here is an updated version fixing this issue.

First of all, as you may have noticed this aircraft has a functional dive-bombing sight and for this I must give an enormous thank you to SnoWFLakE0s. Not only was his work what inspired me to do this on the first place, he was also of invaluable help in guiding me around the "Funky Trees" - I cannot stress this enough. I had started to calculate everything myself but after having severe issues with the calculation of an angle (which happens to be exactly the angle he calculated for his system; I wanted to calculate it myself for the sake of it, but later decided it wasn't worth the effort after several wasted hours), I decided to take the input statement he used in his bombsight and, with a few minor modifications, inserted it into the input statement for this system here, which due to its nature needs a little bit extra trigonometry on top of that - so I also owe him credit for putting and end to my pain trying to make this work. If you would like to know more, you can take a look at it here.

Again, were it not for his help and the work he's already done, I would likely have given up on this system (at least for the moment) and released the plane without this, using a simple fixed sight instead. It's not necessary for the plane to perform in any way, but it is certainly a very nice addition and this plane was actually built specifically to use it. So, huge shout-out.

Let's get this going, then! This is my third and therefore last entry to the 1945-50 Naval Aviation Challenge. I must say, I didn't expect to do a third one but the idea just popped up in my mind and I had to do it. I've been having a blast with this challenge! For this one, the main inspiration was... A bit of everything, really. There's a bit of D.H. Hornet, a bit of Ki-83, a bit of P-38, a bit of Me 410, and maybe a bit of Tigercat, but mostly it was me piecing together features I liked into a plane on the spot. I hope you enjoy it!

I actually designed this aircraft with a "mission" in mind: Take off from the USS Beast, navigate to the WWII fleet, sink the carrier (and prefferably the two destroyers as well) and fly all the way back home, landing in one piece - all in cockpit view with no in-game HUD. For this purpose, I have made a set of instruments for this aircraft, which I like to call semi-functional: They work (Thanks, Funky Trees) but you can't get quick/accurate readings out of them. Still, it is possible to do, and for those interested I shall dedicate an entire section to explain the instruments and how to carry out this "mission"!

And for those of you with little time or who simply do not wish to read too much, I will place a line where the really boring part (extra notes and backstory) start, so you only have to read the necessary stuff. Or, you could just read the controls section below and hop in the cockpit without a care in the world - it is forgiving and docile in handling. Your choice.

- The altimeter has three pointers: The long white one completes a turn each 100 feet. The thicker, stubbier one completes a turn each 1,000 feet, and finally the thin red one completes a turn each 10,000 feet. You can actually use this to have a very solid idea of what altitude you're in as long as you keep track of how many times the red pointer has completed a turn.
- The airspeed indicator "tops off" at around a very optimistic 500 knots IAS: Let me know if you somehow managed to exceed this.
- The heading indicator and the artificial horizon have the same problem: Due to the way the input system is arranged, if they cross the "180 degree" line, they will turn around to the other side abruptly rather than just continue. Tell me if you know of a way to go around this.
- When flaps are fully down, the flap indicator will point down 45 degrees. When flaps are fully retracted, it will be level.

This is the line I talked about in the introduction. Below this point you will find only screenshots and boredom. You have been warned.

"Mission": Sinking the WWII fleet in cockpit view with no HUD

Developed for use in the Pacific theatre of operations, the S. Ca. 132 Ciclone (Cyclone) arrived too late to see combat in WWII, but it was nevertheless quite the feat for its time. Though as with all of its "superprop" bretheren it was to be soon replaced by jet-powered craft, it remains near the pinnacle of advancement for piston-powered aircraft.

The first prototype flew in late 1944, and the aircraft would enter service mid-1946. It remained in service through the early 60's, albeit in secondary roles.

The Ciclone was meant to be a multi-task aircraft, capable of carrying out both strike and long-range fighter duties, making the most out of the space it occupied in a carrier. Though its primary mission was attacking hostile shipping, a great deal of effort was spent in making the aircraft capable of high-altitude air-to-air combat. To this extent, it is powered by two 18-cylinder, two-row turbosupercharged radial engines providing 2000 horsepower each at military power (100%) - This could be further boosted by a water-methanol injection system for takeoff and combat. The engines drive two counter-rotating four-blade automatic pitch propellers, and the area behind them is occupied both by the main landing gear and by the rather elaborate turbosupercharger.

Diagram/sketch showing the turbosupercharger system for one of the engines

The wings feature a folding mechanism, which along with the engine nacelle requires the flaps to be divided in three separate sections. The aleirons are sizeable and allow the aircraft to attain a roll rate uncommon for twin-engine aircraft.

A prototype lands after a test flight.

When flying clean, the aircraft's sleek lines do not lie - it was designed for performance, through and through. Air intake area was minimized to reduce drag, requiring the installation of fans to help cool the engines. The thin fuselage housed an ample canopy near its very nose, providing the pilot with excellent visibility. The aircraft's large wings provide it both with great payload capacity and excellent maneuverability for an aircraft of its size - it was reportedly able to face single-engine fighters in the vertical plane during mock dogfights.

One of the Ciclone's best angles. Note the supplementary hardpoints for torpedoes attached under the fuselage

The aircraft's smooth design is apparent in this top view.

The gun bays on the aircraft are designed in a modular manner; they can be swapped out without need to retrofitting or retooling, allowing a wide array of weapon configurations. A common one for strike missions is four .50 caliber machineguns, as seen here, plus two supplementary 37mm autocannons requiring blisters under the nose. These optional supplementary weapon packages allowed the aircraft to be extremely flexible in various types of ground attack missions, although for air-to-air combat they were rarely fitted; instead, the most common configuration in that scenario was four 20mm cannons.

In late 1945, a Ciclone prototype was sent out to test the effectiveness of the newly-installed 37mm guns on aerial targets. Upon firing at its target, a radio-controlled decomissioned bomber, the aircraft was struck by shrapnel, so potent was the explosive charge in the rounds. The shrapnel struck the left engine, causing considerable damage - while the engine was still running, the chase plane noticed sizeable flames coming out of the supercharger waste gate, prompting the pilot to cut off power and fuel supply to the engine immediately. The fire was eventually extinguished and the aircraft was able to safely fly and land back home in a single engine, proving the aircraft's survivability to damage.

The Ciclone heads back to base with one engine knocked out.

A stable weapons platform, the Ca. 132 was soon to be found flying in all sorts of roles. Among its core missions were: Dive boming; Torpedo bombing; Close Air Support; Interdiction; Armed Reconaissance; Combat Air Patrol; Fighter Sweep; Interception; and Escort. It was a sturdy and reliable aircraft, able to withstand harsh carrier landings and maneuvers while carrying heavy payloads.

A Ciclone slams down on deck.

On the external payload department, the Ciclone was most usually fitted with six hardpoints, normally carrying four bombs and two external drop tanks. However, two additional "supplementary" hardpoints could be fitted under the fuselage, allowing for two more bombs, drop tanks or torpedoes to be carried. With four bombs and two torpedoes, the Ciclone suffered somewhat on performance and range but still remained perfectly capable of carrying out its mission.

Despite being an excellent torpedo bomber, the Ciclone was designed with dive bombing as its main method of attack. For this purpose, the aircraft is fitted with dive brakes and what was at the time a state-of-the-art dive bombing gunsight, the VBM-2A (Visor de Bombardeio em Mergulho, Dive Bombing Sight) - this device was based around an analogic computer linked to the aircraft's instruments, feeding on their data to calculate a bombing solution displayed on a reflector sight to the pilot. This gave the Ciclone unparelled effectiveness in bombing compared to other aircraft of its era.

As the aircraft was supposed to be able to operate in all weather conditions, at day or night, provisions were made so that aircraft could be fitted with supplementary "pods" on the outboard wing sections for extra equipment. A common configuration in dedicated night attack squadrons was one radar pod on the starboard wing and a searchlight on the port wing, which could be slaved to the radar.

Production aircraft were fitted with plexiglass "windows" on the sides of the fuselage - there cameras could be housed for reconaissance missions if necessary, further enhancing the aircraft's flexibility - and cost. While care had been taken during its design to make the lives of maintenance crew easier, it was still not the easiest plane to maintain, with the complex turbosupercharger requiring a good deal of care. This meant the aircraft was not too much cheaper or easier to maintain when compared to a jet-powered airplane, a factor which contributed to its replacement in front-line duty by the Marreco.

The starboard side "camera window" can be seen in this side view.

*Here, the side-looking cameras of a Ciclone spot a truck convoy travelling through the desert.

Nevertheless, these planes continued in service up until the 60's, mostly in second-line, shore-based duties but also a handful as torpedo platforms, bomb trucks and low-altitude tactical reconaissance aircraft. The aircraft's reliability, sturdiness and immense flexibility made it a valued asset by naval aviators and commanders.

A prototype test-fires a torpedo. 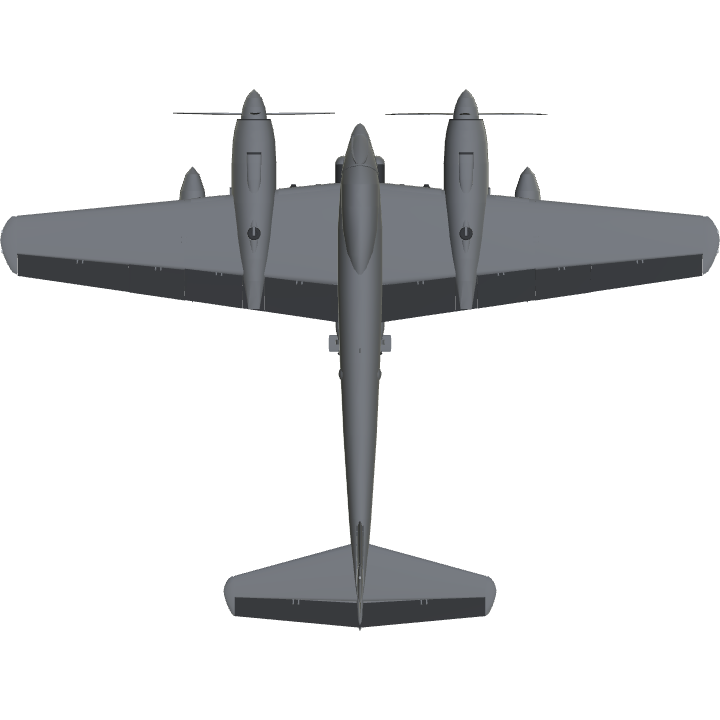 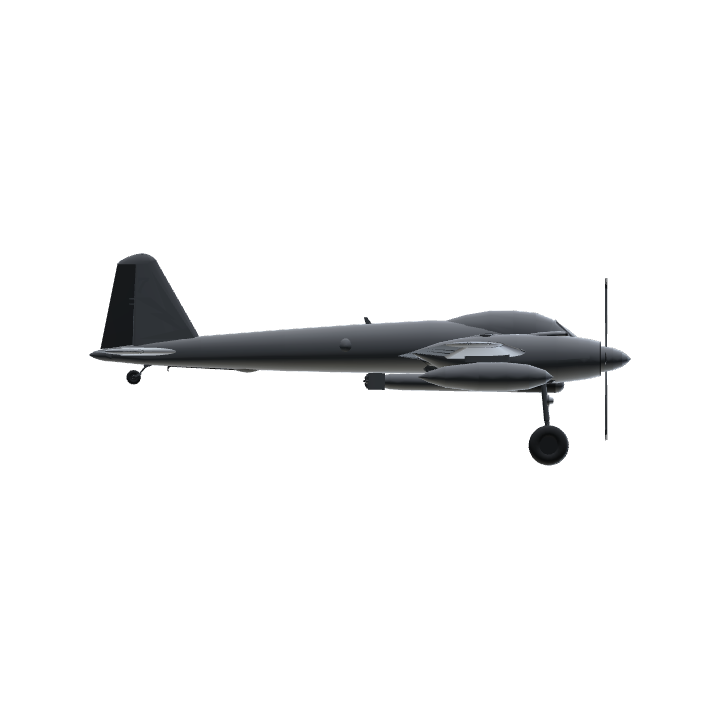 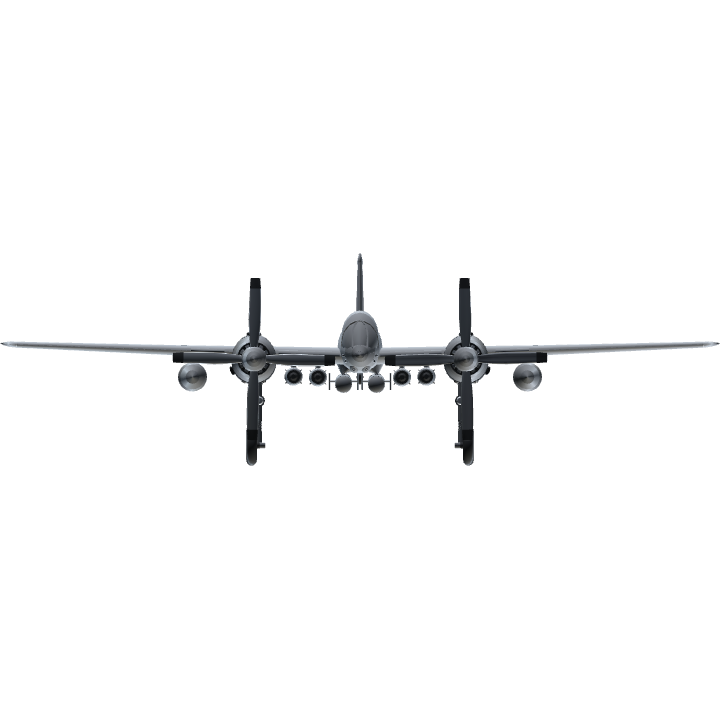