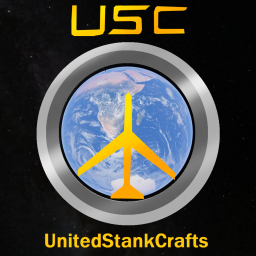 Some posts are highlighted for you to put some attention there.

Hello, folks, I am United Stank Crafts(USC) living in India. {my name was inspired by a title name of KSP aircraft upon first making-'United SpaceCraft'. Hence the name(Just changed name'Space' to 'Stank'.)} I started using SimplePlanes way back in 2017, before coming here in 16 August 2018.I first started with a zero.. if you have any of our planes or gyros OR any other post, let me know if you have liked it or not. Some of my planes are 'break-bones'.

My Style of building aircraft- Creative, Futuristic, some little bit explosive, Real'ish', Crazy, fast(horribly breakneck in case of USC Fiter121), I used 'USC' for last time in 'USC Hammer'skjold'' . now I use 'EarthEmblem'. and then I

Plane projects I like to make- Emperor, Constable.
Other games- TrackMania, Minecraft

it's logo is Profile picture.

THINGS I AM FAMOUS FOR-

1-the term 'food' for explosive weapons(used from USC AF1 to USC Constable 3).
2-double-lever controls for plane(might be disgusting)(If I were to make a plane with interior, I would use this control)

(Be careful while handling my planes, try, and give me an upvote or comment if you enjoyed.my advice.)

I would use either prefix 'USC' or 'EarthEmblem'.

(CAUTION! - I don't use mods that add parts to game. So don't expect me to make posts with lasers or superman powers.

That's all for today, take care, and 'Don't you dare.'

You can go through my posts .