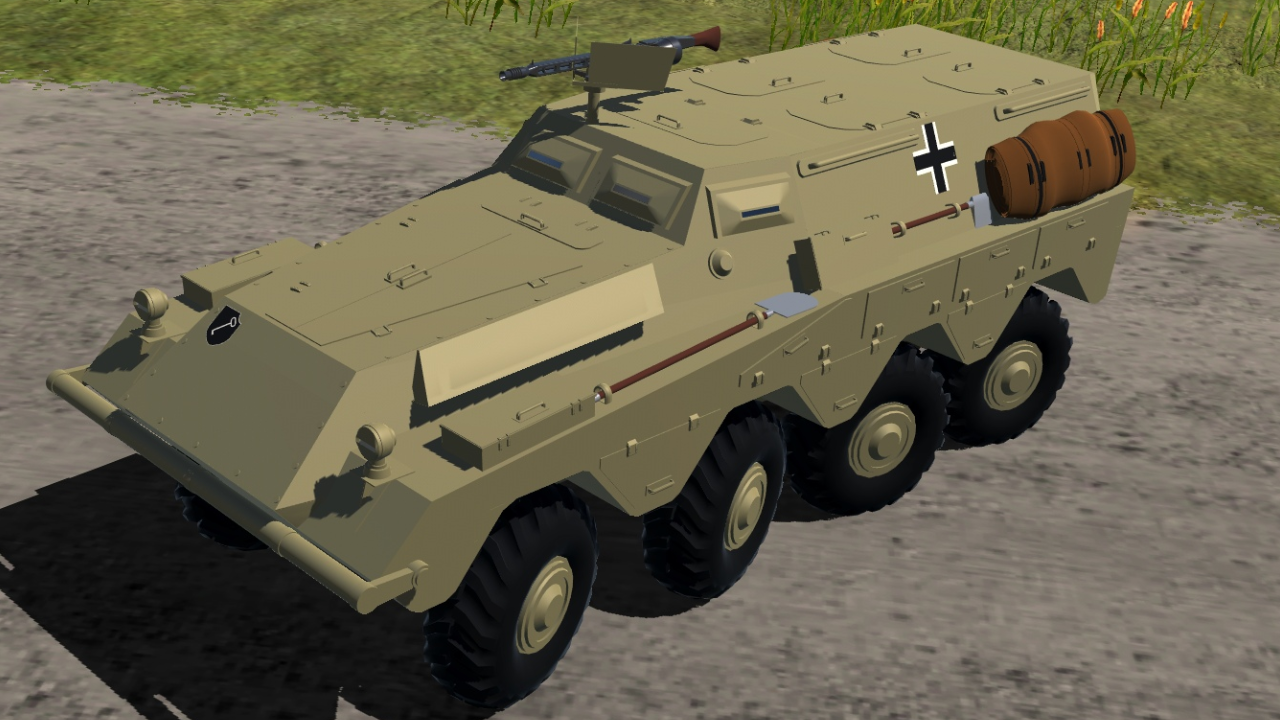 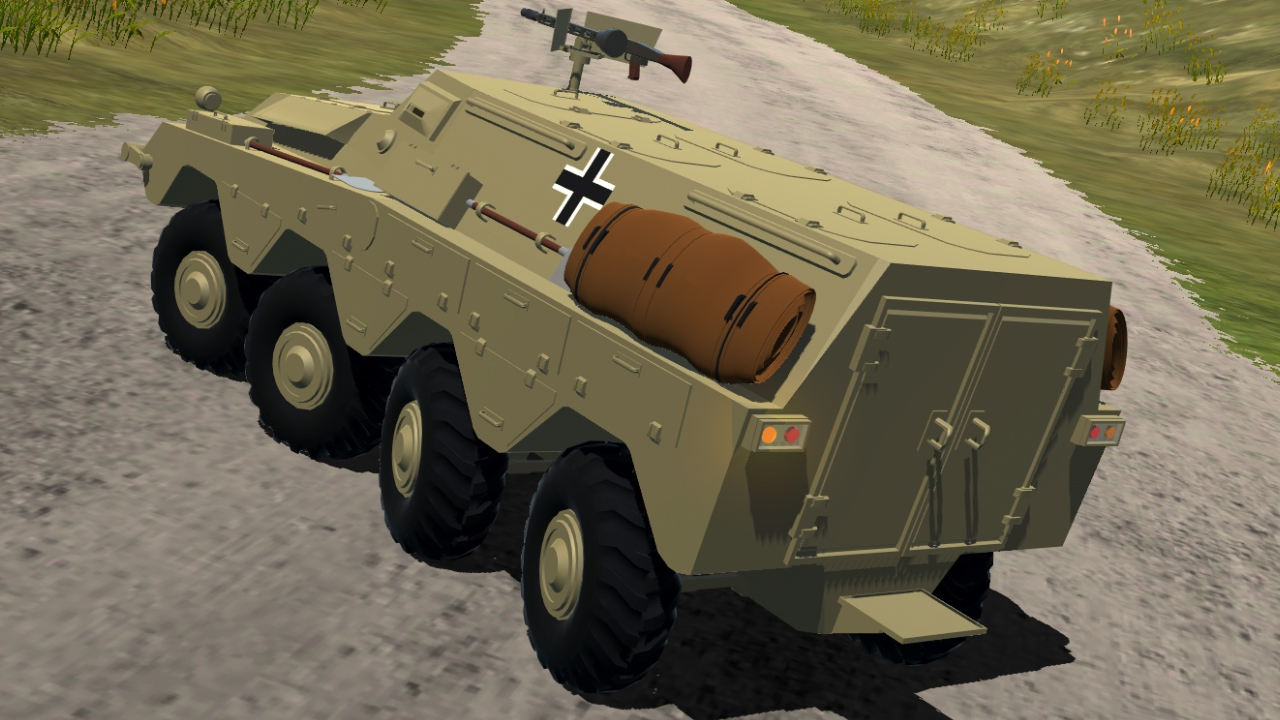 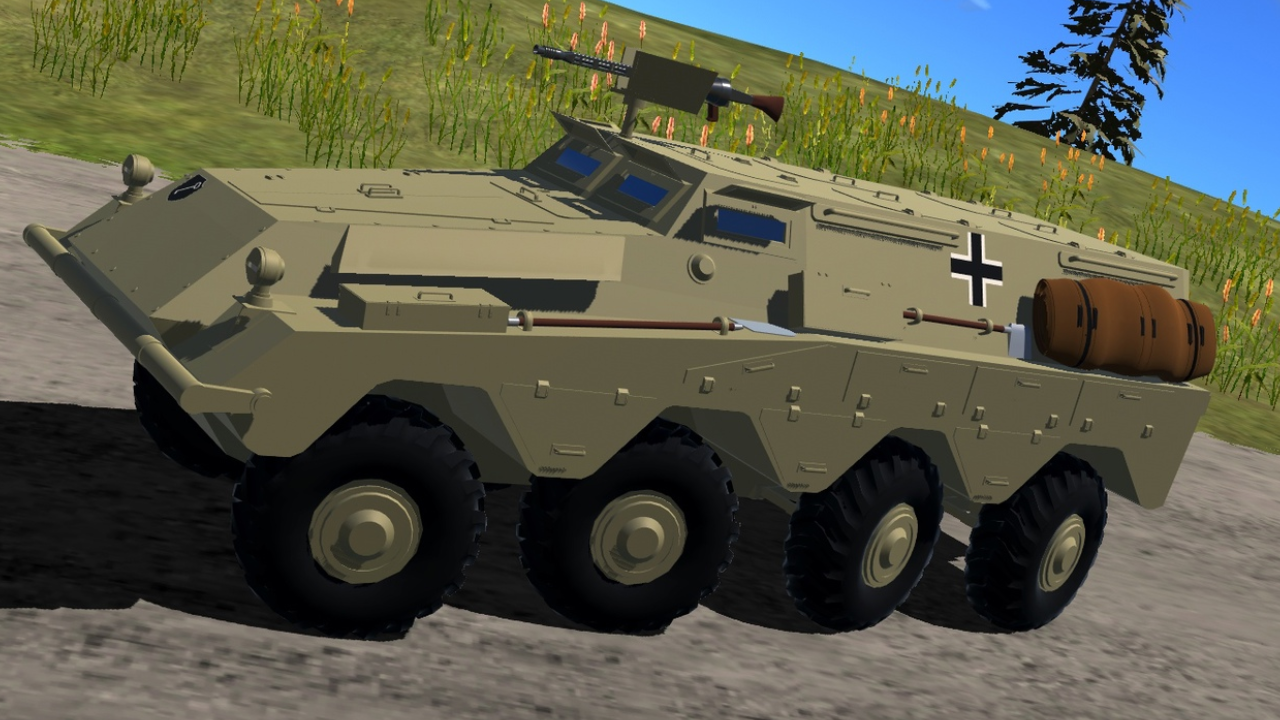 Wow, wheeled machinery from me again.

Sd.Kfz 939 - Heavy Armoured Personnel Carrier in Germany, its development was conducted from 1938 to mid 1939, the first prototype was released in mid- to late 1939. Feature of this armored vehicle was a 8x8 and four steering axles, which ensured high maneuverability of this armored vehicle. The Sdt. Armoured Personnel Carrier's curb weight is 15,000kg (15 tons). The weight is due to the German Ministry of Defence's requirement for high and effective protection against all small arms that can be carried by infantry soldiers, such as machine guns, rifles, heavy machine guns, and anti-tank rifles. 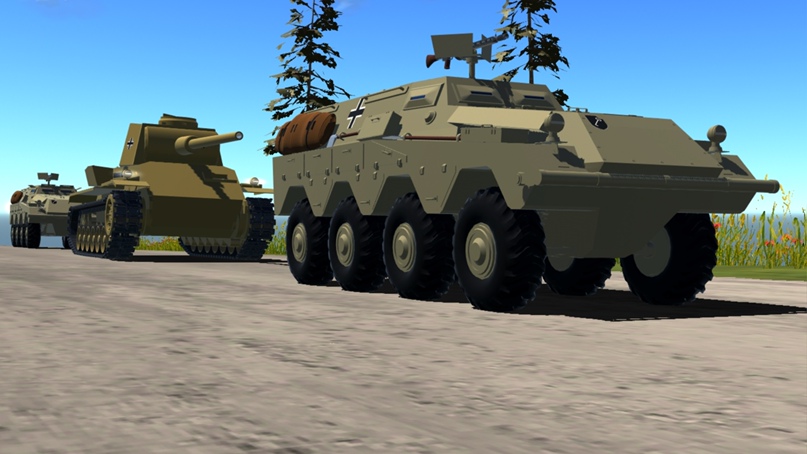 The armoured personnel carrier has faceted shape with good slope of armour plates, which provides full protection against 13mm anti-tank rifles from 20-40m distance in the frontal area, side and aft areas can sustain 150mm shells fired from 10-20m distance, sides and stern can sustain machine gun and assault rifle fire, easily sustained a grenade.

The overall armouring of the armoured personnel carrier as a whole is fully compliant with the requirement for full protection of infantry personnel against all types of small arms fire.

The armoured personnel carrier has five roof hatches, four of which open outwards towards the sides, thus forming a shield for the firing squad inside. 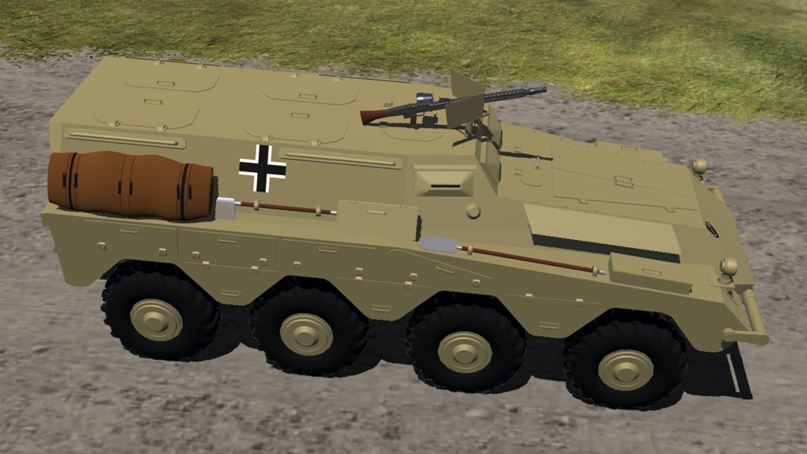 The vehicle's engine is mounted at the front of the vehicle, with a power output of 225 hp, giving a total of 15 hp per tonne. The vehicle can reach a top speed of 99 km/h on road and 35-55 km/h on dirt roads, depending on road conditions. The maximum range of the armored personnel carrier is 350 kilometres, with an additional fuel tank this distance increases to 500 kilometres.

The vehicle can carry 6 to 10 troops. The vehicle has also been designed to replace other armoured vehicles and features some interchangeable parts, ensuring a good flow of spares and other parts when in need of repair. 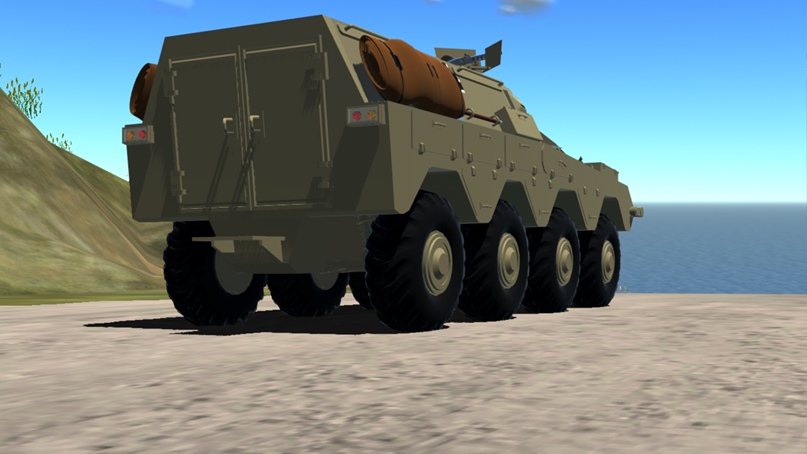 The vehicle has also become a base for many other armoured vehicles, e.g. the APC "Sd.Kfz 939/8 Eule" with a 700mm IR projector, which will be used as a reference vehicle for at least three VK 37.01 tanks fitted with the night vision device.

Attention also can be given to the very good maintainability, due to the engine access flaps and the 7 (14 in total) spares boxes on the sides of the vehicle, which give access to a large number of tools, weapons and other things needed by soldiers and vehicles. The seats inside the vehicle are attached to the sides of the armoured personnel carrier, which provides much better resistance to mines, or rather the troops will be less injured if the vehicle is hit by a mine. 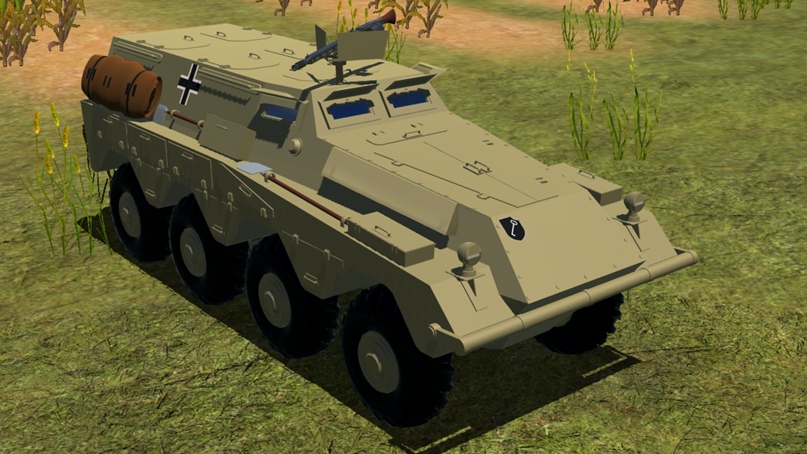 The tyres are bullet-proof, no penetration of 9x19mm bullets gives a significant advantage in active combat in most types of terrain, the roof provides protection against 9x19mm and 7.92x33mm bullets. 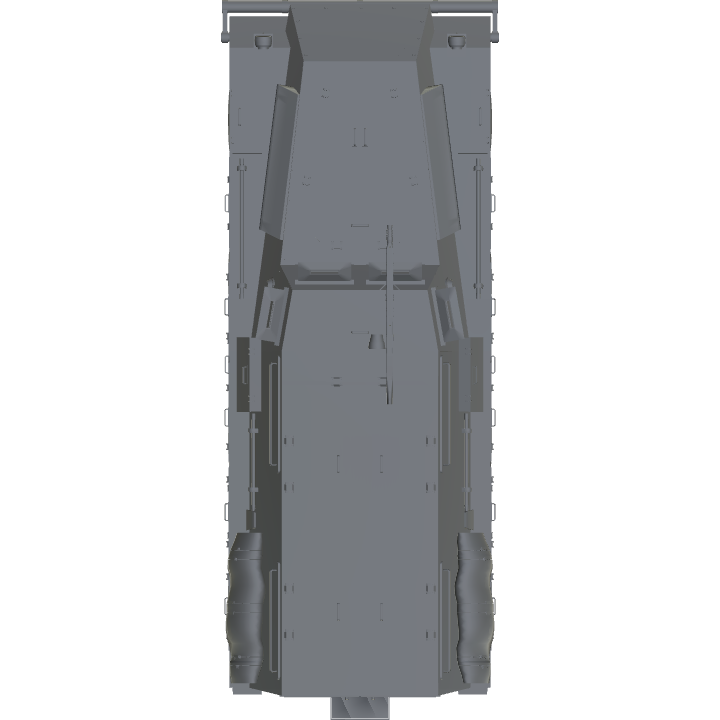 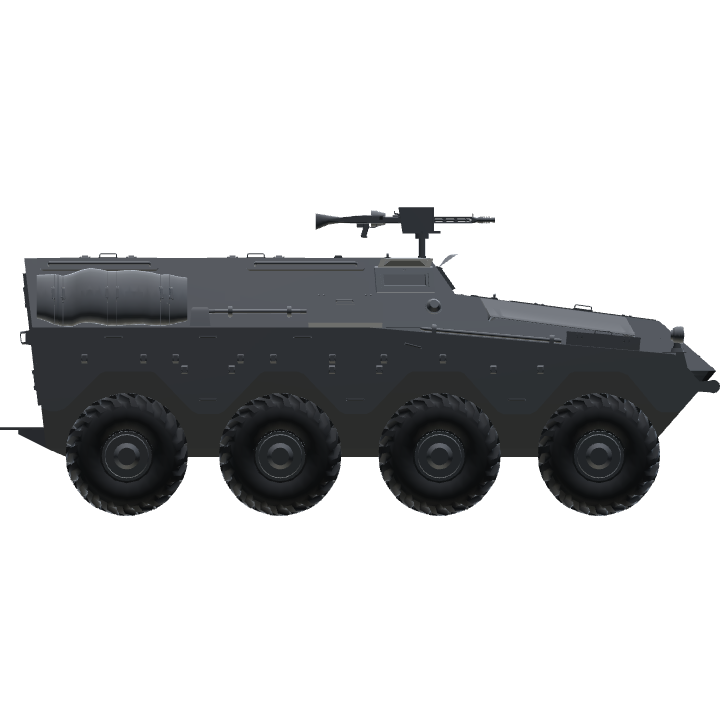 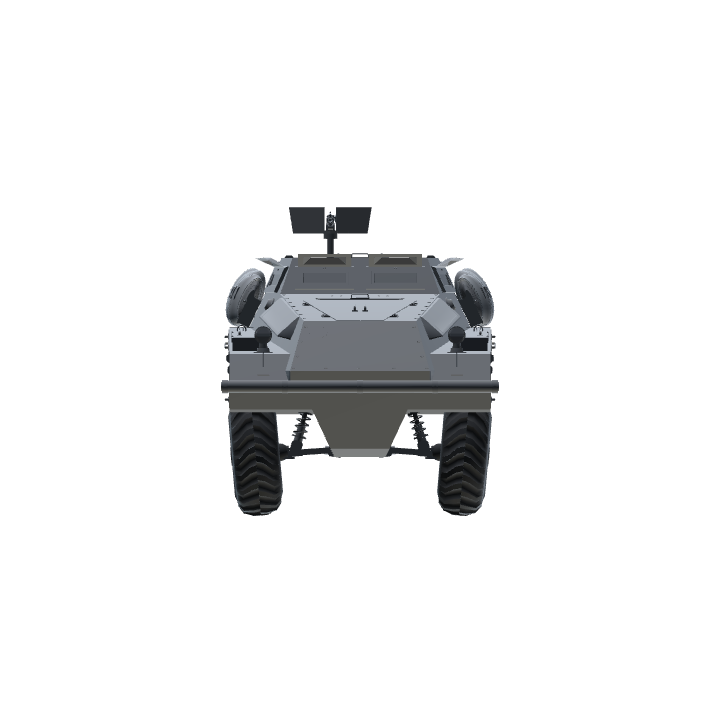