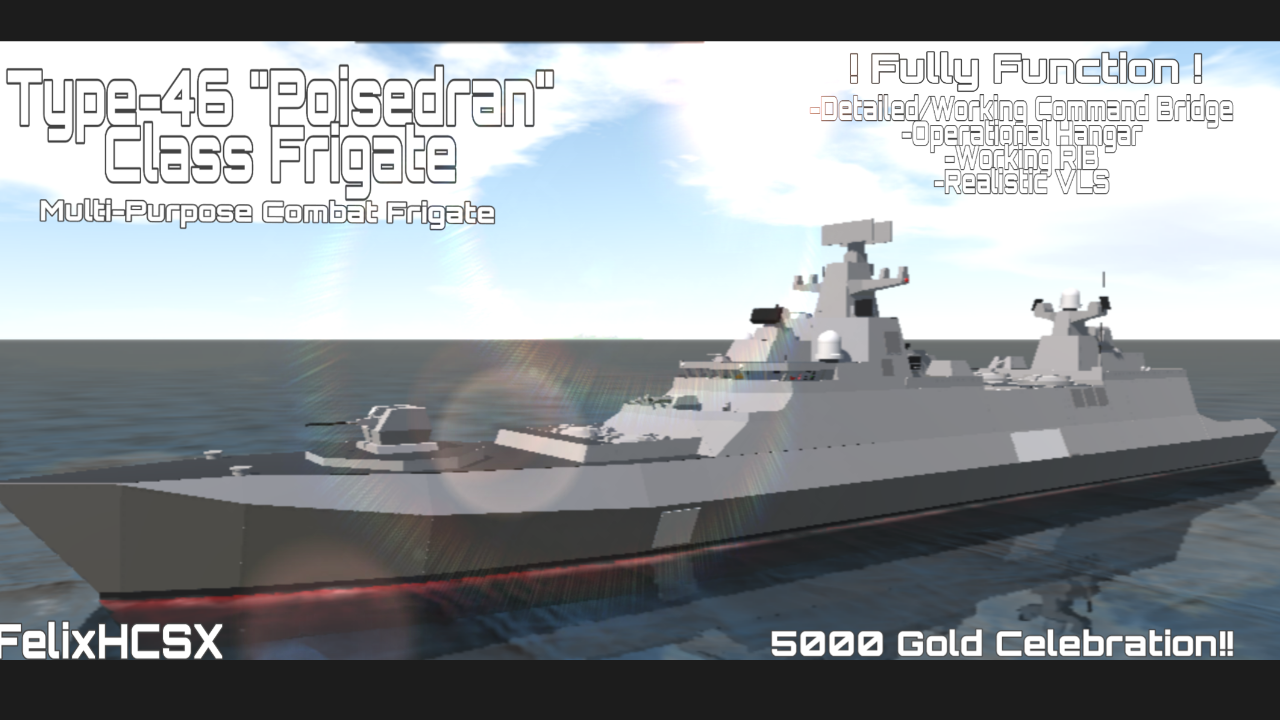 The Type-46 Poisedran Class Missile Guided Frigate (FFG) is a multirole Frigate of the Republic of Fixlion Navy (My Fiction Nation),the Navy request for a Surface combatant ships that serves as the backbone and the primary ships of the navy, The ships was designed by the General F.E.L Corporation and with production started 1 Months after its introduction, The Navy signed a contract to build 16 Ships in 12 Shipyards across the nation

The Type-46 Poisedran class frigate is a multi-role frigate that can run various mission which can be used in offense and defense, The Frigate possessed with the newest and latest Electronic device and radar, it also armed with variety of weaponary, from Naval Artillery,CIWS,Torpedo,RAM Launcher, and Various Missile 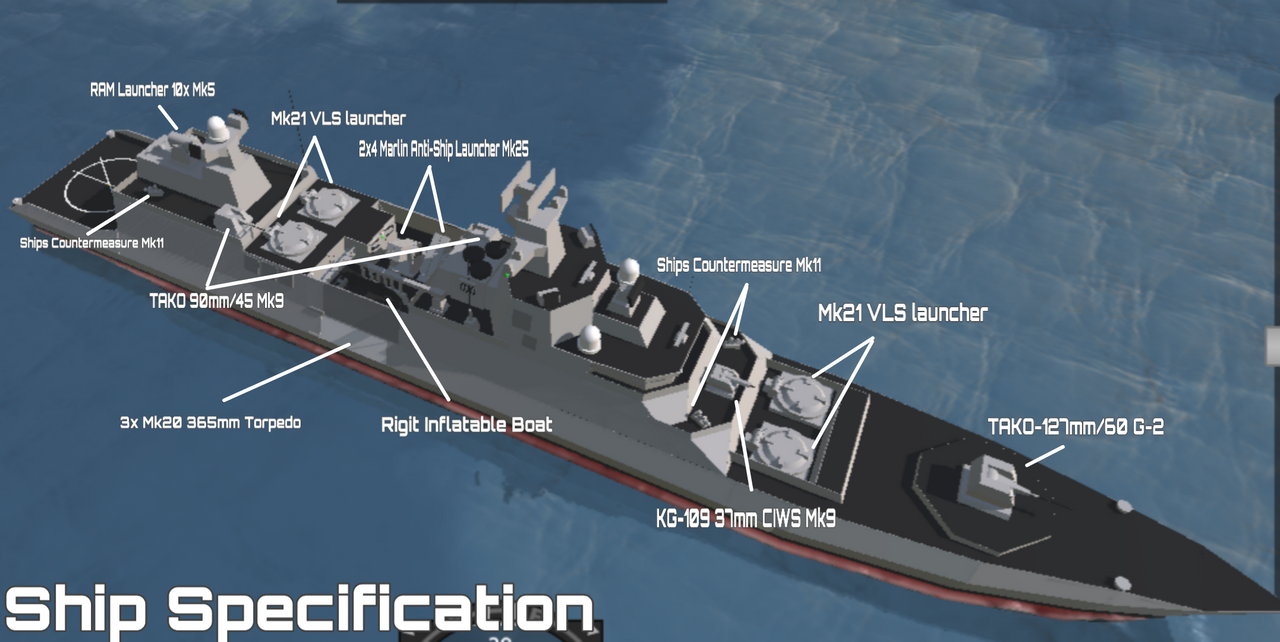 1x KG-109 37mm CIWS mk9
KG-109 is a Heavy CIWS, Used to Defend the carrier and shoot down Nearby Aircraft, the CIWS will start targetting Aircraft At Range of 6km with effective range of 4.5Km,
will automatically aim at 6KM

2x Tako 90mm/45 Mk9
The TAKO 90mm/45 cannons serves as a secondary weapons, Located in the middle section of the ships

4x7 Vertical Launch System Mk21
each Launcher consist of 7 Tubes, with total of 28 missile,
All the Tubes were loaded with MXM-096 Trident II Multi-Role Missile
, The MXM-096 Can target both Aircraft and Ships at range of 280KM

AG1 + VTOL Up to open Hatch

2x 4x Marlin Anti-Ship Missile Launcher Mk25
An anti-ship missile, a single of it is enough to sink USS Beast

The ships are equipped with the lastest radar and electronic system, Such as ASR-690H Air Search Radar and FXX-880 Fire Control System,

it powered with 2x BMB-1090 Turbine Engine which can powered ship with max speed of 37 Knots, (Fast..)

1.Activate AG2 and Trim Up to open door,then deactivate after it open
2.Activate AG5 to activate Crane Trim Up to Lift RIB, and VTOL to Rotate RIB
3.Rotate the Crane and Drop RIB at Water(deactivate AG5)
4.Activate AG6 to Start RIB

1.Open the Door
1a.Throttle down and deactivate AG8 to Stop the ship if needed
2.Steer the RIB into the Right side of the crane
3.Activate AG5 and rotate the crane and Trim up to Lower down Hook/Magnet
4.Rotate the Crane Gently
4a.Roll to rotate Magnet/Hook to Adjust the RIB Rotation
5.Deactivated AG5
6.Close the Door

Thanks Everyone for who supported me

Sorry for the Overlapping Activation Group, I try my best to Make it more simple 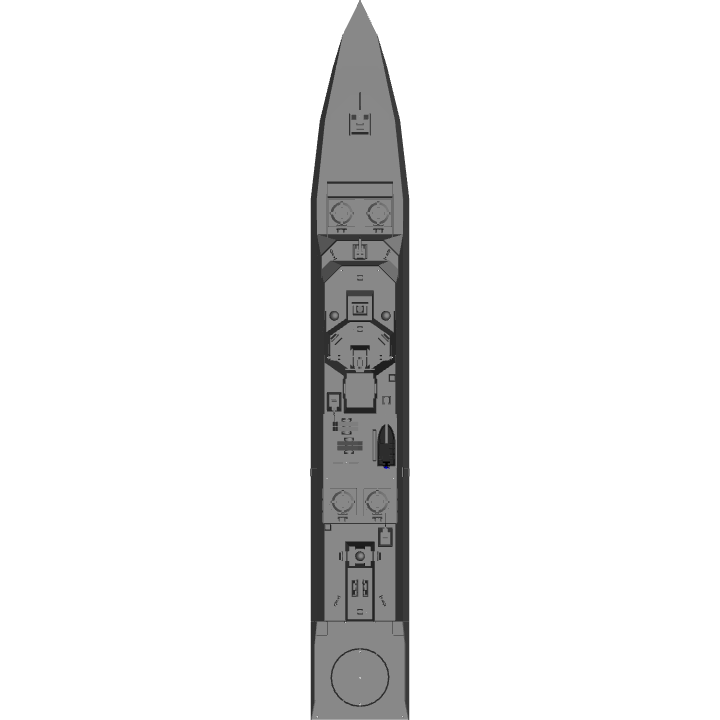 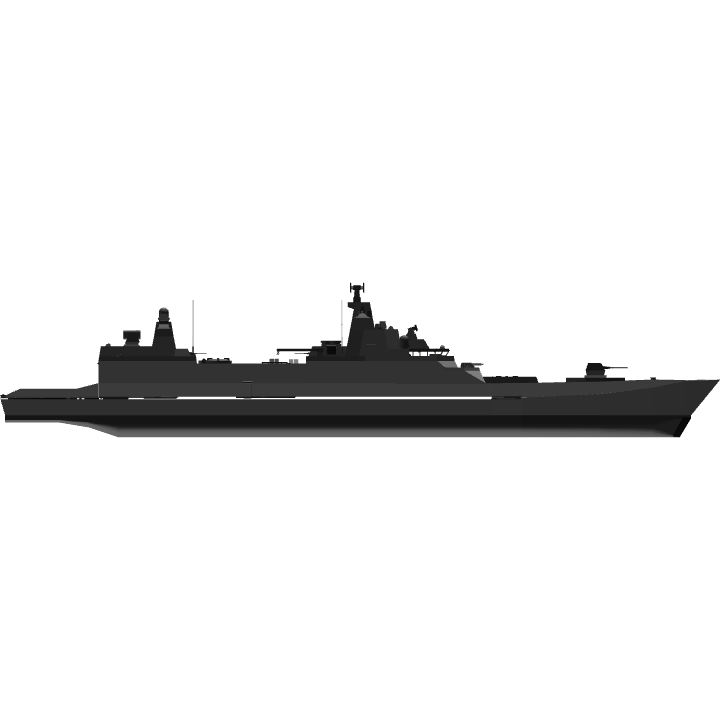 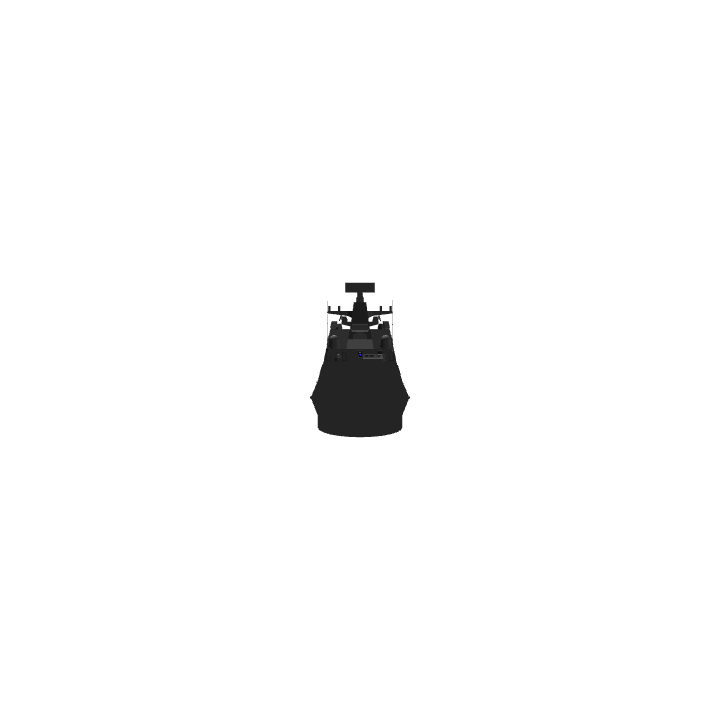