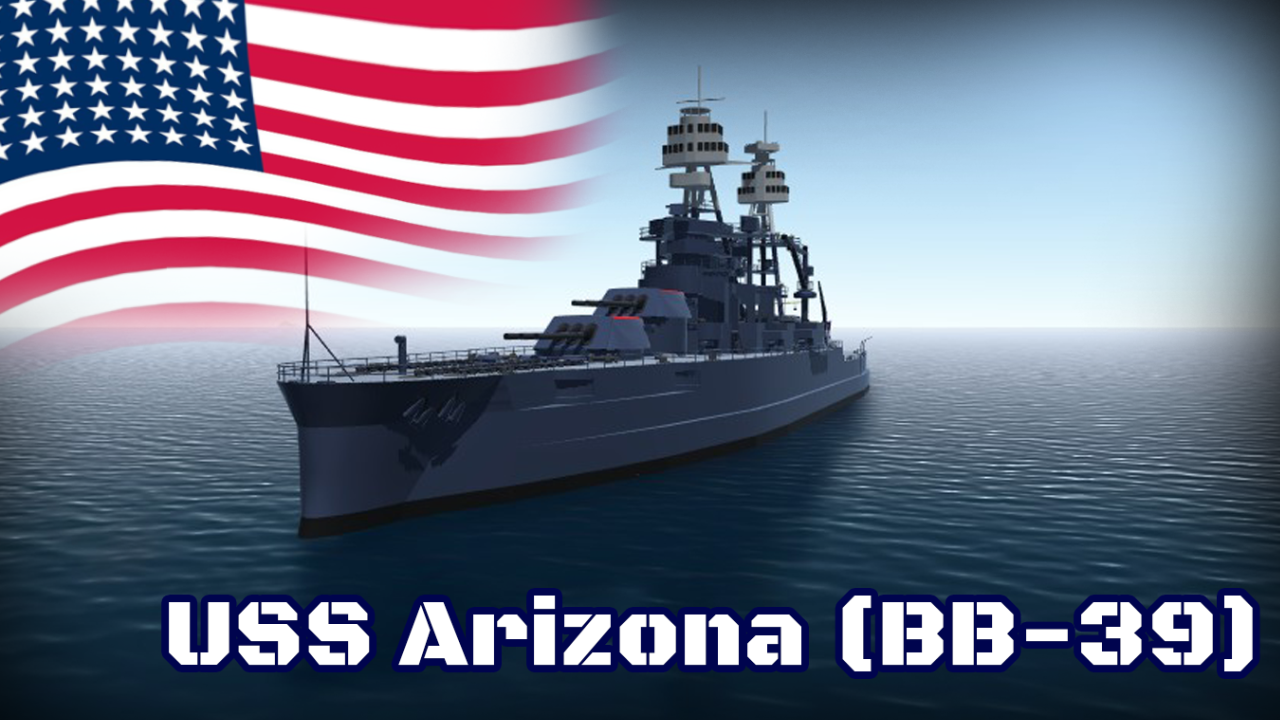 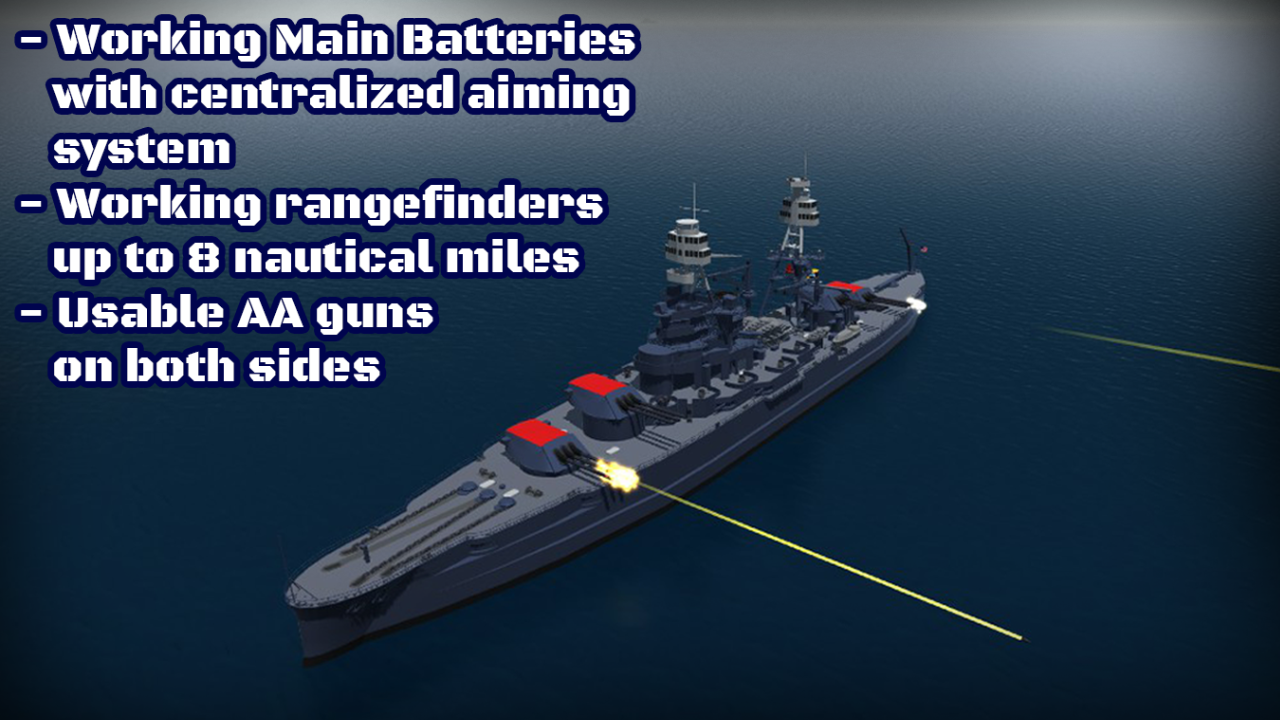 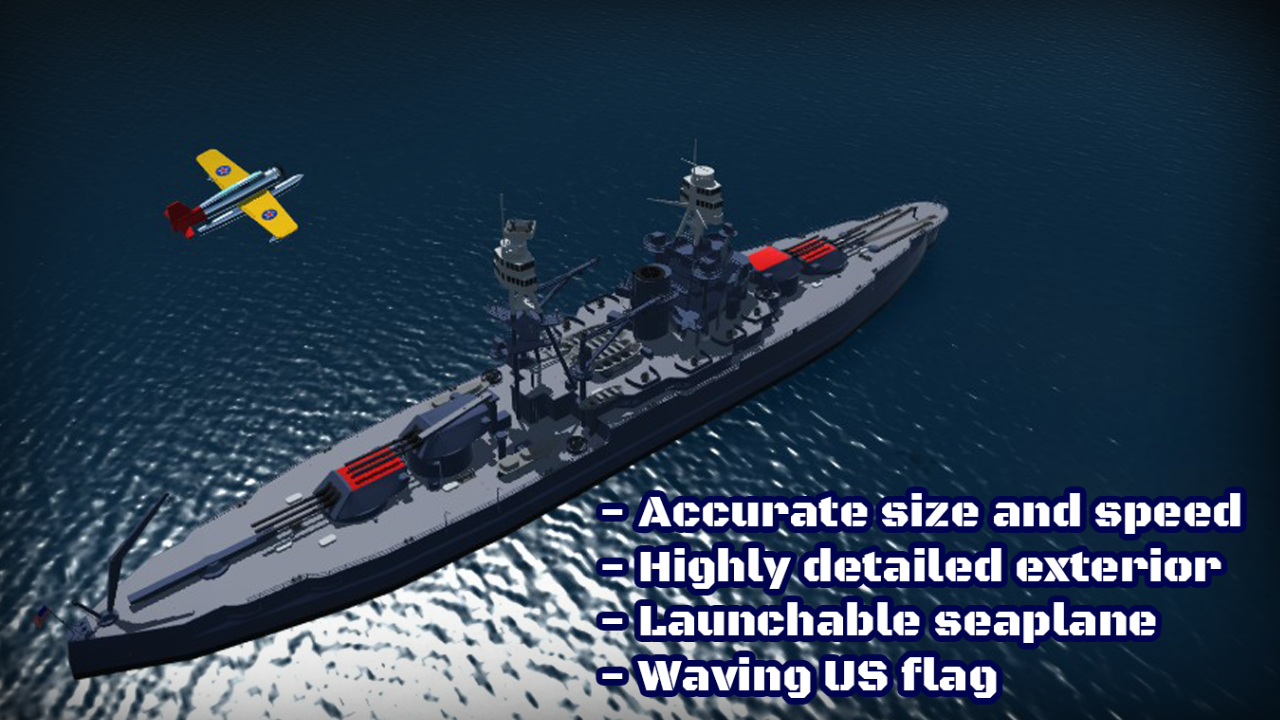 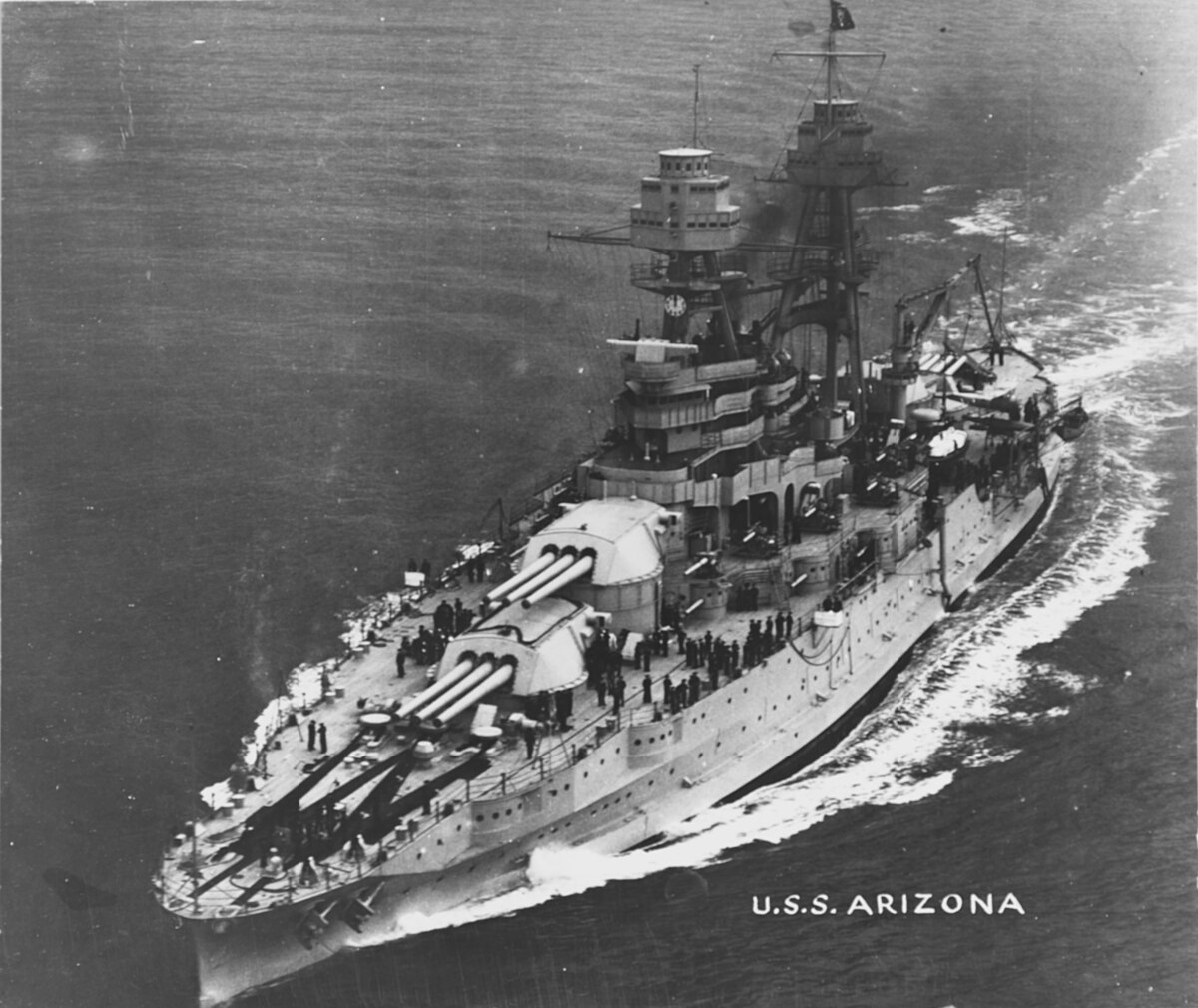 Battleship No.39, USS Arizona was a Pennsylvania-class super-dreadnought, second in her class. She was launched in 1915 and entered service in the following year. She did not take any part in WWI, but she was among the ships that escorted President Woodrow Wilson to the Paris peace conference. In 1919, she was sent to Turkey to represent American interests during the Greco-Turkish war. In 1921 she was transferred to the US Pacific fleet where she remained for the rest of her career. In the following years she went through several modernisations including adding seaplane launch platforms, replacing her old cage masts to tripod masts and several other changes. In 1933, she was anchored in San Pedro when an earthquake hit Long Beach, California, the Arizona joined the relief efforts. In 1934, Arizona was featured in the movie "Here Comes the Navy". Throughout the 1930s, Arizona's routine consisted of exercises. In 1940, her and the entire Pacific Fleet was transferred to Pearl Harbor, Hawaii to deter Japanese Imperialism. In the morning of December 7, 1941 Japanese aircraft, launched from carriers, appeared on the skies of Pearl Harbor. The aircraft started attacking the base sinking and damaging many ships, destroying several planes on the ground and damaing other facilities. Arizona took quite a few hits before at around 08:06, a bomb hit near turret number 2, penetrating the armored deck and causing a magazine explosion. The explosion caused the forward turrets and the conning tower to collapse downward and the foremast and funnel to collapse forward. The explosion and other hits killed 1177 of the 1512 members of the crew. Oil from the ship is leaking into the harbor waters to this day. After the attack, it was clear that the ship couldn't be resurfaced. Most of her superstructure as well as her number 3 and 4 turrets were salvaged. Her number 1 and 2 turrets were left in place but the cannons from the number 2 turret were removed and were installed on USS Nevada in 1944. Nevada later fired these same guns against Okinawa and Iwo Jima.
In 1962, the wreck of the Arizona was designated as a national shrine. A memorial was built above the wreck with a shrine room where the names of her fallen sailors are listed on a marble wall. Surviving members of crew may have their ashes be placed within the wreck after they die. 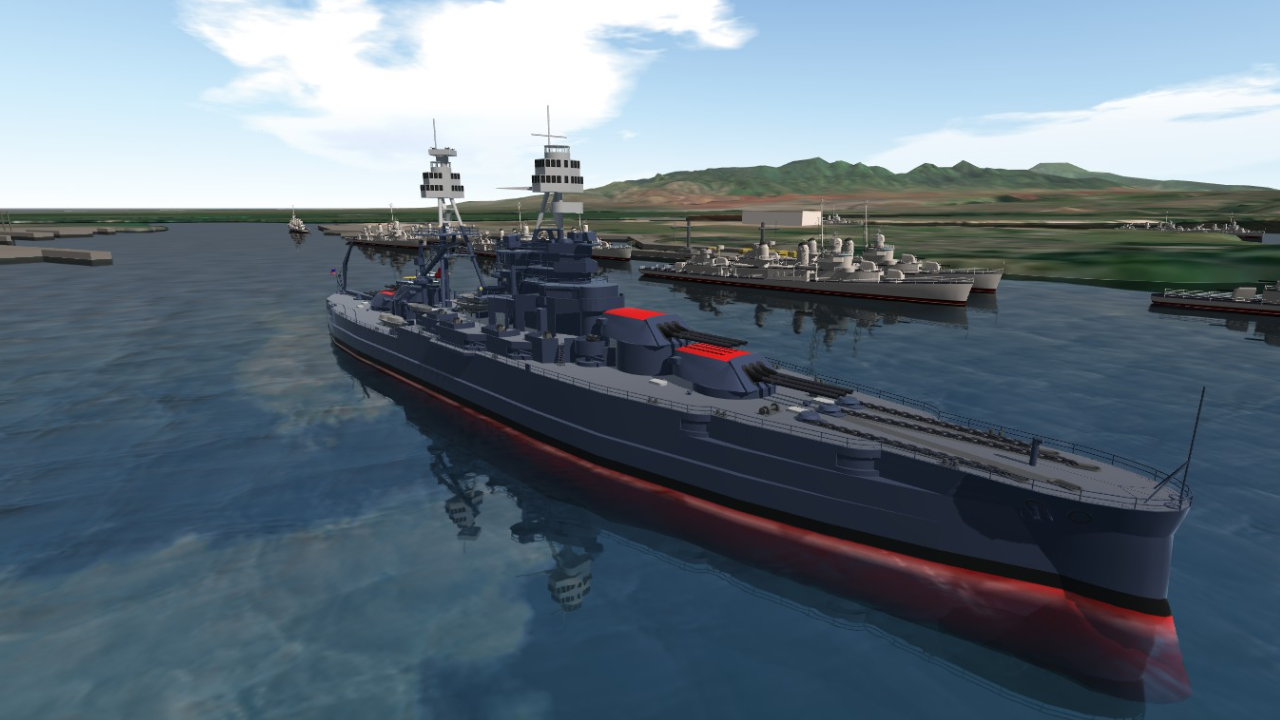 The map used on this screenshot is "Pearl Harbor" by MisterT

This build features accurate size, speed, a number of usable weaponry, working rangefinders and a flyable Vought OS2U 'Kingfisher' seaplane.
My main sources for modelling the Arizona was her rendition in World of Warships, as well as a number of blueprints. 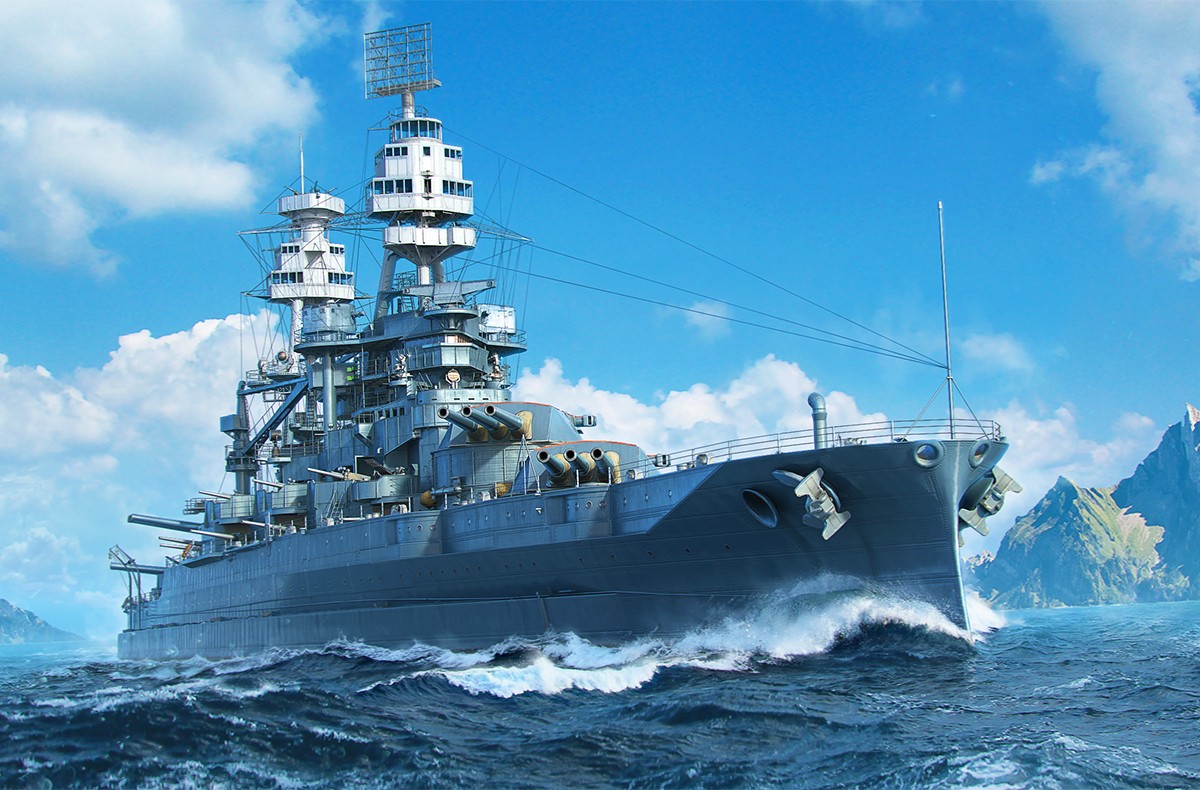 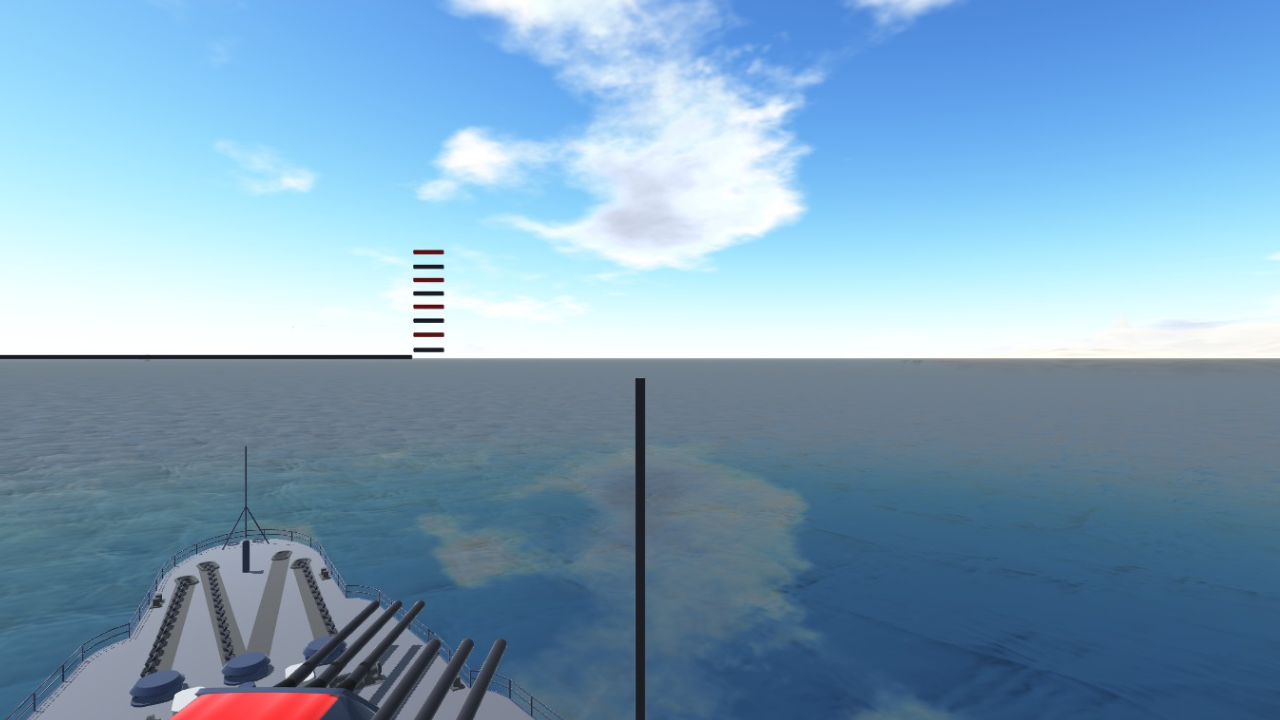 Each short line represents a nautical mile. If your target is let's say, 5 nautical miles away, you aim up until the long horizontal line is in level with the 5th short line. 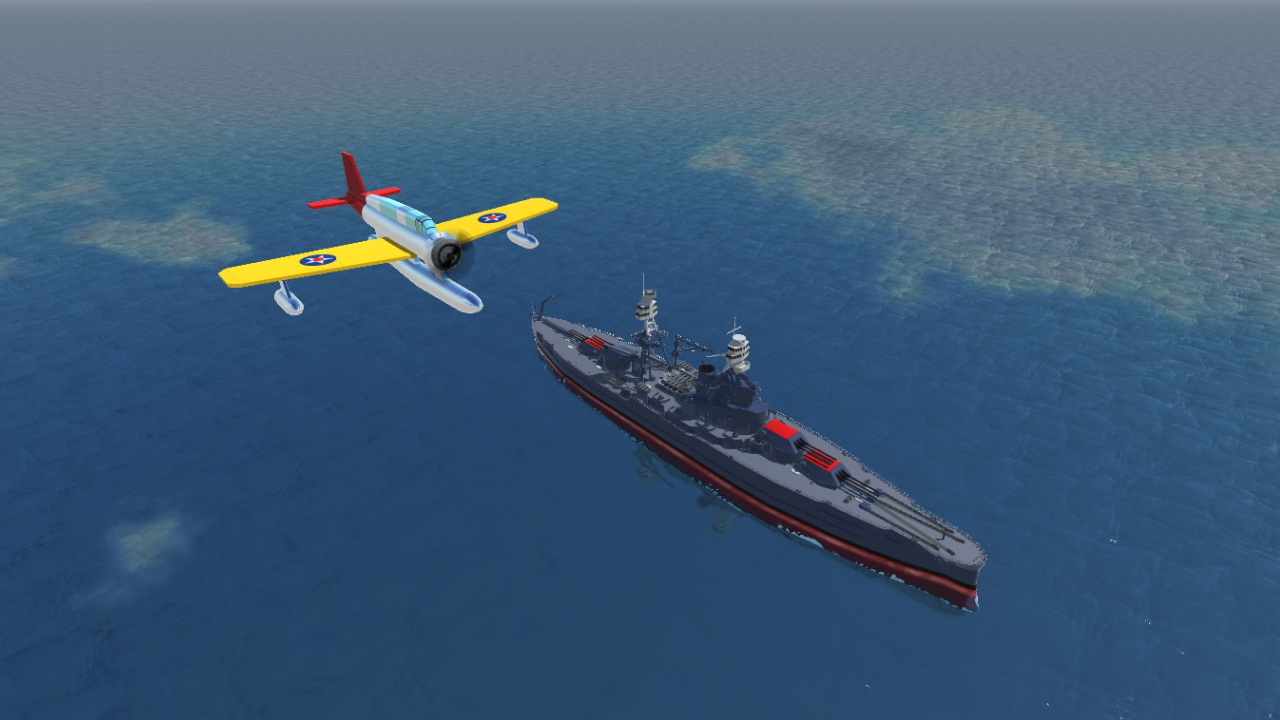 Launching:
To launch the seaplane, you have to set the launch direction by turning the turret number 3. Activate AG1 and rotate the turrets until the plane is clear to launch (the default position is good for launching too). Then turn off AG1 to hold the launch platform in place. Now set Throttle to 100%. Turn off AG8 (or you can leave it on, but it is recommended to turn it off) and change to CAM5 or CAM6. Once you are ready to launch, activate AG6. Now you successfully launched the seaplane.

Spotting targets:
The seaplane is very useful when you want to shoot targets at long distances with the ship. To do this, you first need to locate the target. Once you found it, fly close to it but don't be perfectly above it, try to be a bit near above it. Once you are in position, Activate AG7. If you activate it at the right time and the right place (requires a bit of practice) the plane will set in a circling course above the target (lowering the throttle of the plane will make the circle course smaller). Now deactivate AG6 and activate any of the main guns. You need to have the Aim Predictor set to High in the game settings. Now aim with the guns and use the seaplane's chase/orbit view to see where your shells will/did hit.
Here is a gif to show you how it works in practice: 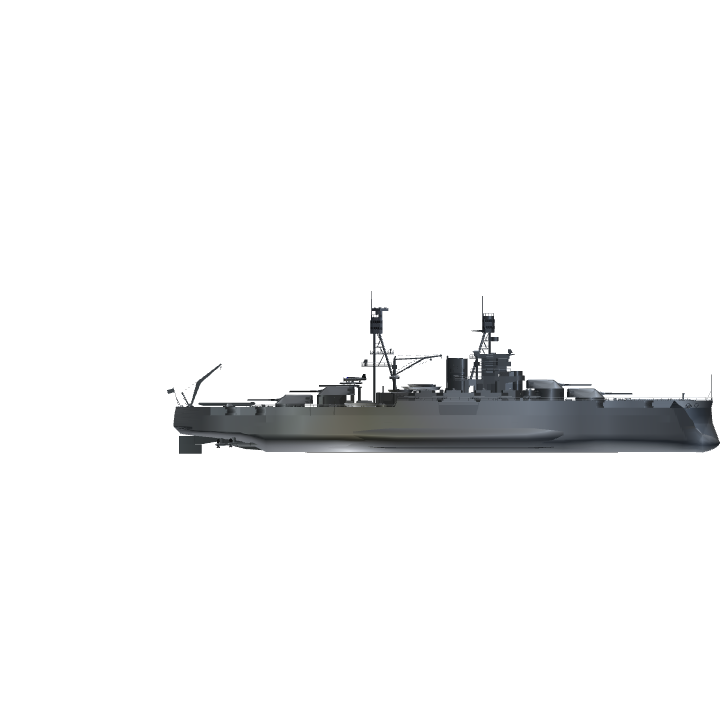 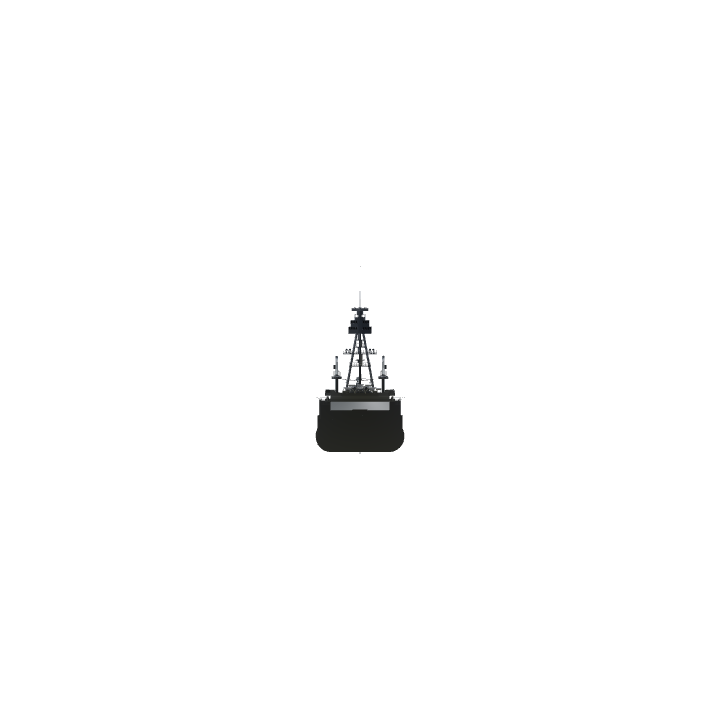