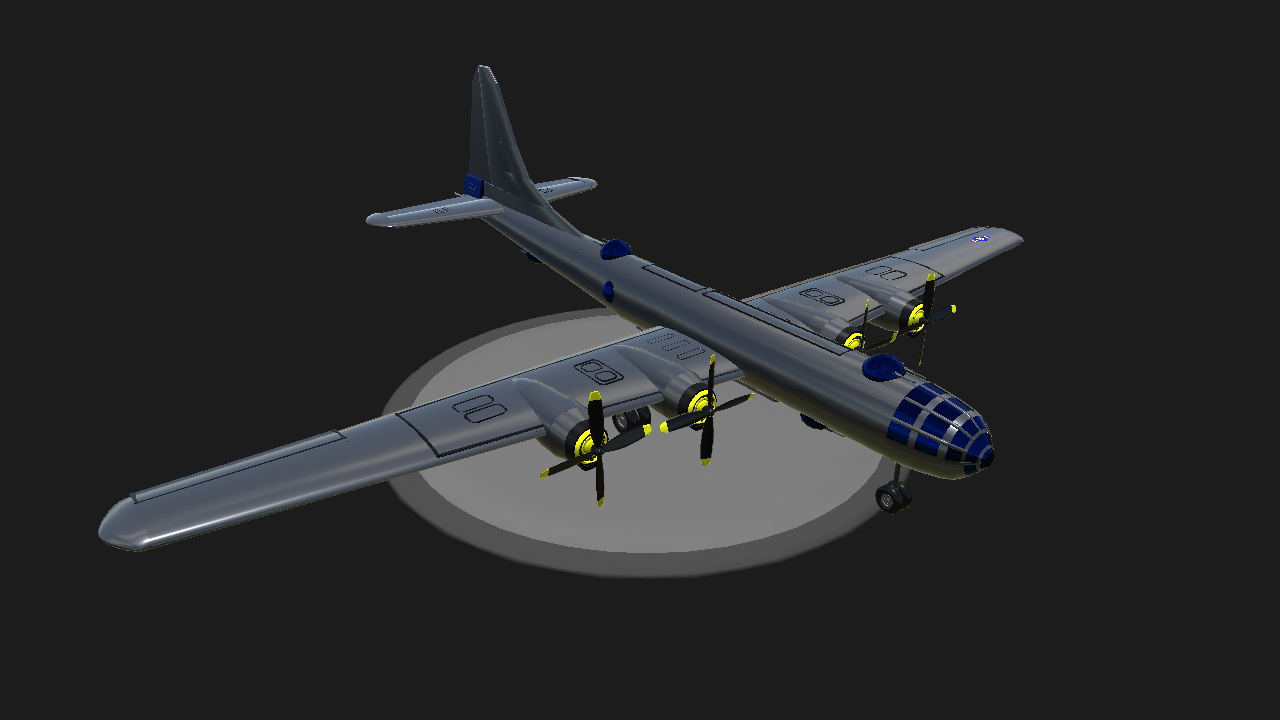 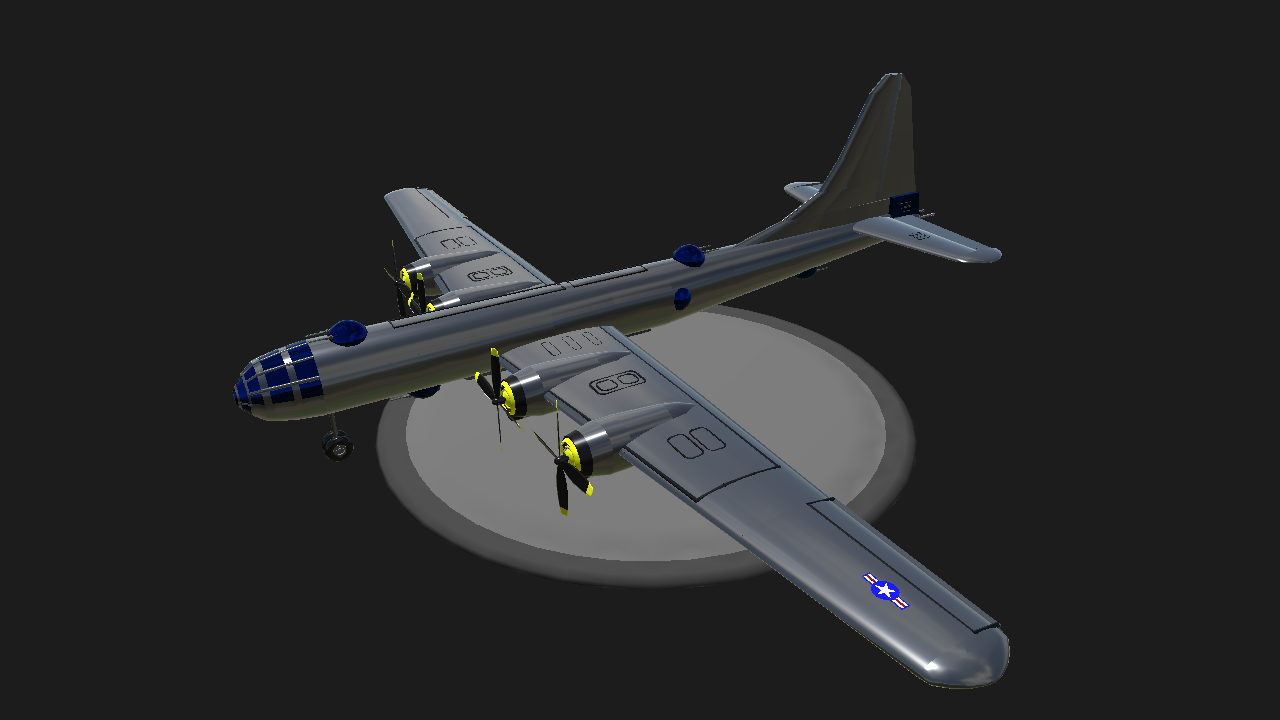 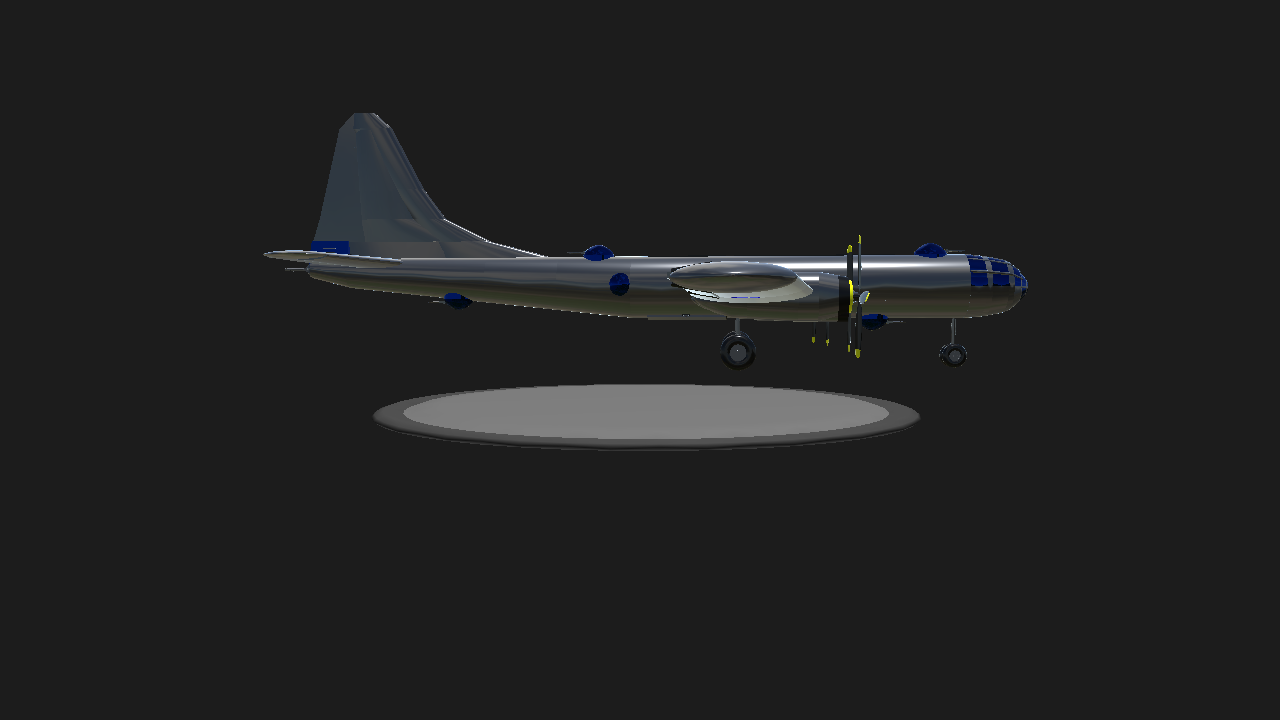 This is my first heavy bomber.
Hope you like it :)

Before using all the guns make sure you allready level your plane then press ag 8 to dissable all control surface .after the control surface disabled. level the plane using the flaps(VTOL).

Use roll and pitch for gun movement.

The Boeing B-29 Superfortress is a four-engine propeller-driven heavy bomberdesigned by Boeing, which was flown primarily by the United States during World War II and the Korean War. It was one of the largest aircraft operational during World War II and featured state-of-the-art technology. Including design and production, at over $3 billion it was the single most expensive weapons project undertaken by the United States in World War II, exceeding the cost of the Manhattan Project by between $1 and 1.7 billion. Innovations introduced included apressurized cabin, dual-wheeled, tricycle landing gear, and an analog computer-controlled fire-control system directing four remote machine gun turrets that could be operated by a single gunner and a fire-control officer. A manned tail gun installation was semi-remote. The name "Superfortress" continued the pattern Boeing started with its well-known predecessor, the B-17 Flying Fortress. Designed for the high-altitudestrategic bomber role, the B-29 also excelled in low-altitude nighttime incendiary bombingmissions. One of the B-29's final roles during World War II was carrying out the atomic bomb attacks on Hiroshima and Nagasaki.
Because of the B-29's advanced design, unlike many other World War II-era bombers, the Superfortress remained in service long after the war ended, with a few even being employed as flying television transmitters for the Stratovision company. The B-29 served in various roles throughout the 1950s. The Royal Air Force flew the B-29 as the Washingtonuntil phasing out the type in 1954. The Soviet Union produced an unlicensed reverse-engineered copy as the Tupolev Tu-4. The B-29 was the progenitor of a series of Boeing-built bombers, transports, tankers, reconnaissance aircraft and trainers including the B-50 Superfortress (the first aircraft to fly around the world non-stop) which was essentially a re-engined B-29. The type was retired in the early 1960s. The B-29 production total was 3,970 aircraft. Dozens of B-29s remain as static displays, but only two examples, Fifi and Doc, have been restored to flying status, with Doc flying again for the first time from McConnell AFB on July 17, 2016.
A transport developed from the B-29 was theBoeing C-97 Stratofreighter, first flown in 1944, followed by its commercial airliner variant, the Boeing Model 377 Stratocruiser in 1947. This bomber-to-airliner derivation was similar to the B-17/Model 307 evolution. In 1948 Boeing introduced a tanker variant of the B-29 as the KB-29, followed by the Model 377-derivative KC-97 introduced in 1950. A heavily modified line of outsized-cargo variants of the Stratocruiser is the Guppy /Mini Guppy / Super Guppy, which remain in service today with operators including NASA. 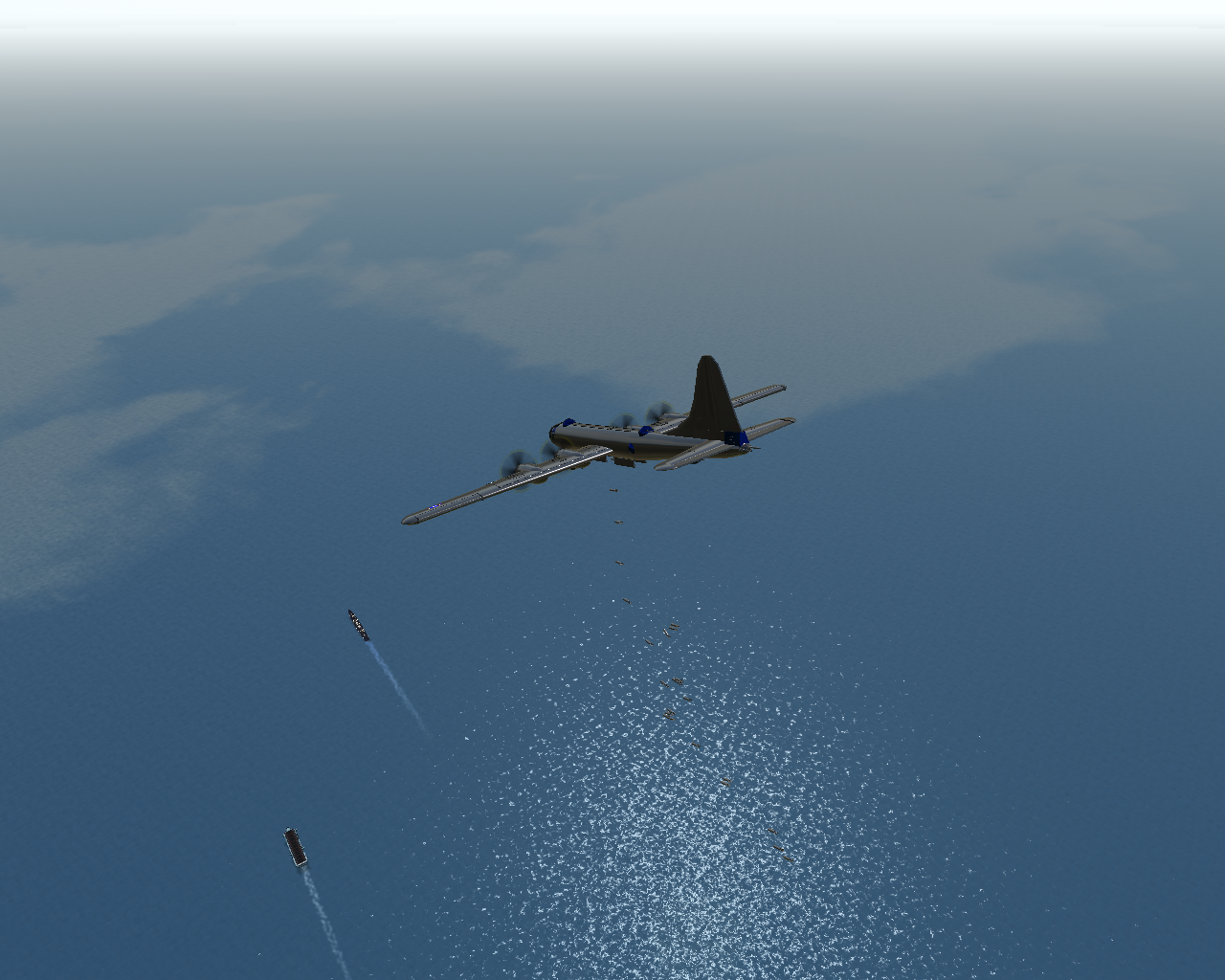 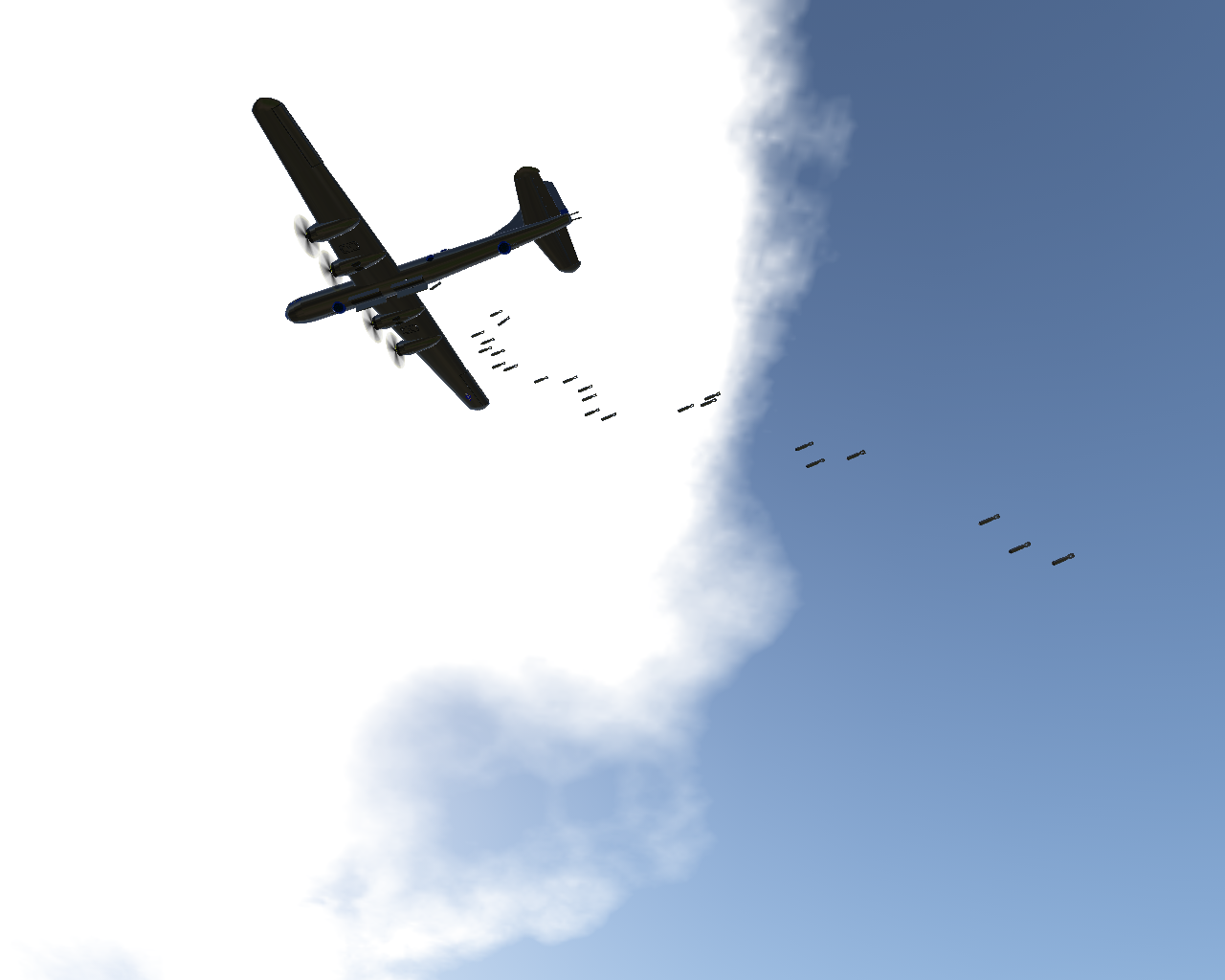 Feel free to give me feedback; ) 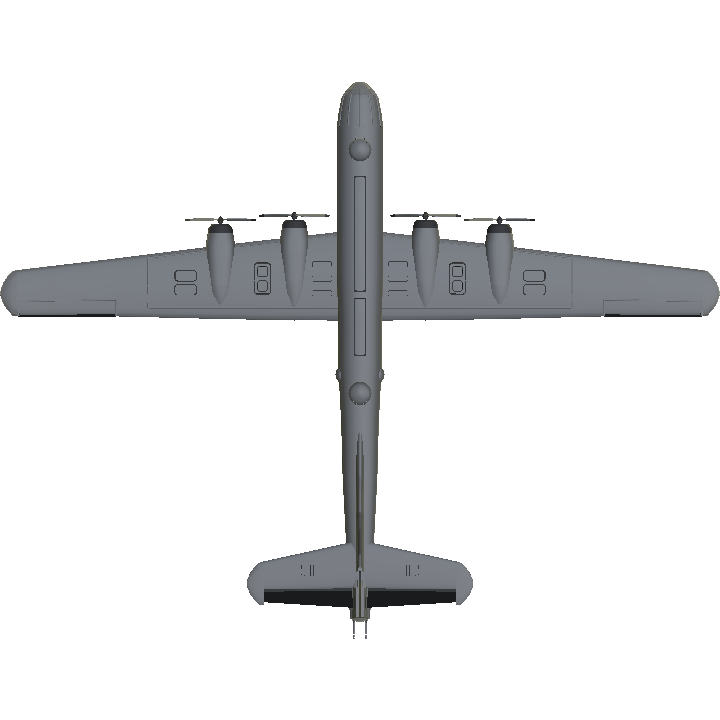 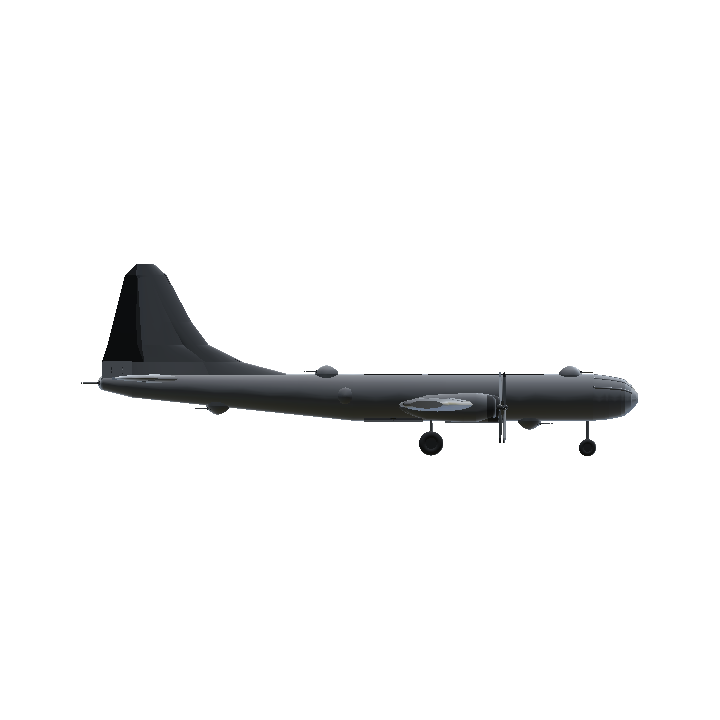 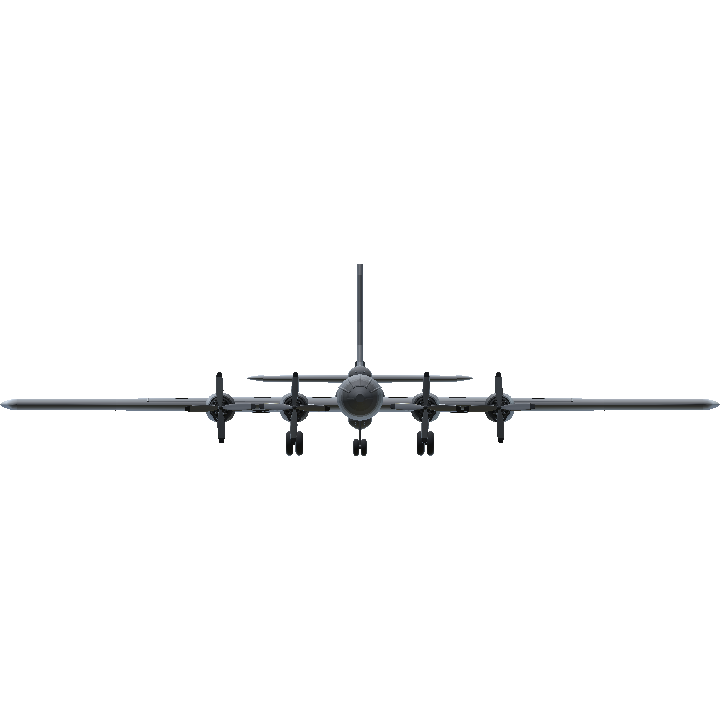