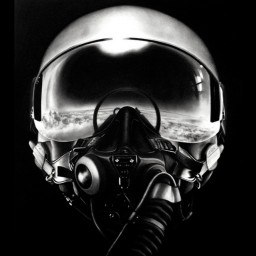 Somewhere so dark, so foreign, can only be envisioned by the person who experienced it. I was in that spot at a point I was sure was before the existence of anything, nothing, one could say. A place so distant from reality, a place that doesn't even register on the same wavelength of anything we have seen, or will ever see. A being stood before me, so tall and slender, seeming to take the shape of something I wasn't even sure could exist, and seeming to stretch upwards an infinite distance, yet I was able to see him in his entirety, only what felt like feet from my face. I was paralyzed with fear, it almost felt like what I saw and felt was in the form of emotion. The time elapsed that this being existed in front of me, felt as though googols upon googols of years had passed, in a time frame of several thousandths of a second. And then, all of a sudden, "it" spoke something to me in what sounded like a mix of audible static, and a language you couldn't hear, a brief message instructing me to go forward. At first, I was unsure of what it wanted, "to go forward?" I asked, the being did not reply. And I stood there staring at him, staring back at me until it uttered a form of alienated language that directed me once again, to go forward. I was terrified to ask another question, for fear of what "it" might do. So I did the only other thing I could've, I took one step forward, and immediately began falling. It felt as though the creature was watching me constantly through my descent. Not knowing whether this is what "it" wanted or not, I just kept falling, waiting for something to happen, wondering if this is where I would spend my eternity; falling at an unknown rate of descent in a pit void of any visible light. For what seemed to last an unmeasurable amount of time, or at least what a human brain can comprehend, I woke up in my bed abruptly, I immediately looked around and noticed it was midnight by the glaring red light from my alarm clock on my nightstand. It was silent in my bedroom, just broken by the constant humming of my ceiling fan, and an occasional headlight beaming through the darkness across the old country roads past our house. I had quickly realised that my bizarre experience, likely with a duration of just a few seconds, had been a figmant of my imagination. With an experience as vivid as the one I just had, it was still hard to quite convince myself it wasn't still happening. Although, with the effects of the hour I had awoken and the exhaustion from my dream, I had nothing more then sleep on my mind. And so I dismissed my nightmare and quickly lay back in bed, hoping it would never happen again...

My personal theory (with absolutely no scientific evidental backing) behind how the big bang started actually begins with the idea that the big bang didn't actually start at all. So many of you might know this already but the theory behind how the universe completely ends is that all of our energy in our observable universe, and potentially beyond that, completely and evenly spreads out across the physical expanse of the universe. And at that point, the process of entropy cannot possibly exist, because entropy exists because of the imbalance of energy (keep in mind this so called "energy death" at the end of the universe will take approximately 1 googol years, so in other words, a long-ass time). But I digress, my theory behind what happens after the "energy death" and even potentially what caused the big bang is that in order to summon a supernova like explosion, such as the Big Bang, a perfect dispersion of energy, such as the "energy death" has to take place. So basically what I like to believe is that once we experience that perfect dispersion of energy across the universe, in that very moment, everything collapses and forms the big bang again. All in all the process of the beginnings of our universe don't have to start at one given point, it has just been doing a circular pattern for an infinite amount of time before the last big bang. I understand people will find this an ignorant theory because I have no reason to believe it, other then for simple pleasure, but no other astronomer or scientist has a better idea of what happens after the "energy death" then I do anyway. Its all simply speculation. But my theory is just fun to think about and imagine.

When I die, take my cremated ashes and dump them into the great beyond of space. Where they will float on forever until potentially being pulled in by some planet's gravity field or maybe into a black hole with such incomprehensible mass and density as to compact and crush any known particle of matter into what appears to us, as nothing. That, is the ultimate method of leaving a legacy, even for many years after your existence has ceased. - Hedero

stares intently as the unsettling truth about the end of our existense slowly creeps up on us, as it gently grabs our shoulders, the stealth-like being whispers in an unknown language we can somehow follow, saying that "it's time to go". We follow the creature as we both descend into an unchartered territory no being has ever once ventured, not knowing what the very next instance in time will bring forth to us - Hedero

Each and every being to have ever been known to exist in our universe has a beginning and an ending, the time from your first breath to the last one you take looks to be as miniscule as the scale of one atom when compared to the total timeline of everything's existense. But do not let your short, small blip in time stop you from enjoying it. Live life, and enjoy and cherrish the technological progression in life, your family, and every good experience you've ever had, because you will not have the exact same event happen again. You will never breathe the same breathe, you will never experience the same second in time over again. Do not settle for "mediocre", settle for better then what you've expected. - Hedero

[This message is written by Hedero, to remember and commemorate all the dramatic, bad times, yet amazing and impressive SimplePlanes creations built and uploaded by none other then RandomUsername. Older users will remember her. And just to inform future generations of users on the website, this player had begun like every other player, no popularity or fame, but very soon, Randomusername, or RU, had gained a massive amount of traction on the website quickly attaining 90k points before abandoning her account and leaving the website in shambles after the drama she had brought forth. I'm not blaming her or the website, but we can all agree it was crazy for the few months after she had departed. I havent spoken to her in many months, I have not the slightest clue as to how she is coping nowadays, but that is none of my concern and I do not wish to find out. I suppose that sums it all up, thank you for reading.]

Hello, I'm a 16 year old boy who loves aviation with a passion! And so I am a proud community member of Simpleplanes. I will normally build replicas and sometimes fictional creations. My aircraft are built to the best of my ability. Such as high quality details and good looks. I'm not so good with performance though, but I do my best!

I advise constructive criticism and tips about my aircraft that would make it better. So don't hesitate to say something about my plane that you would change.

In real life I plan on getting my private pilot's license as soon as possible. But as far as careers involving aviation goes, I still don't know exactly. But I will most likely end up in something along the lines of charter.
Overall though, this community has been very kind to me and everyone else. It's very supportive. So thank you to everyone who comments, downloads, and upvotes my aircraft. It means a lot to me. Have a great day, and safe flying!