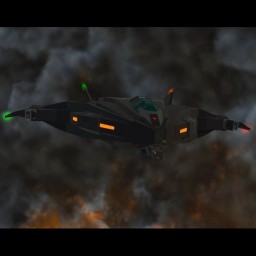 To those who come across my profile, let it be known that I am no longer an active player and builder of this game. I still lurk this site from time to time, upvoting and spotlighting builds that are up to my taste, even drop an occasional comment or two, but I have never opened nor played this game in more than a year, and I'm afraid I will no longer do so. I have long since left SPMC, and I'm sure a few of you do still remember me. This game has been one of the few memorable moments of my life, and it still is and always will be, but nothing's ever permanent in life, and I must say that I have to move on. Thank you, SimplePlanes!

Welcome to my side of the community!

I'm Ephwurd, your not-so-active platinum-rank builder. I don't post a lot of builds (due to me both being lazy and busy), but I do check out some builds and drop a few upvotes here and there, with that occassional spotlight and comments.

Fictional builds are my thing, especially the sci-fi stuff. I have noticed that a lot of you here are hardcore real-life plane replicators so I decided to go down the route of filling in the void of cool-looking sci-fi builds (that's totally not an excuse of my lack of skill of making any replica of an actual or fictional vehicle).

My builds are mostly for looks, only a few are "unique" in a sense that they are different from my usual stuff. Each of my builds have their own story, all of which are related in a roleplay of sorts (which is sadly inactive for the last few months).

All my builds are connected to the Continuum, my fictional Federation-style human interstellar empire that spans almost a third of the entire galaxy, and is currently under threat from both an alien race that's also a master of biological warfare and some unhappy citizens.

Enjoy my starfighters, bombers, mainline warships and weapons and any other stuff I've posted! (Or don't, the choice is yours)

If you wish to make a successor to any of my builds or take any of their components, may it be weapons or anything else, inform me first, or I'll go ballistic (not really but information is a major key ;) ).

Lorewise, I am the ambassador of the Continuum Empire to the multitude of alien races that coexist among us, such as the Interstellar Federation of Sentients, a group of alien races with the goal of uniting the galaxy toward a common goal. I also am the head of the Continuum Research & Development division, and due to military contracts I also supervise collaborative hardware and software manufacturing with the following private corporations:

The Continuum is founded by the first three successful colonies of humanity after the Crossing on 2964 A.D.. The first three member worlds are the Venera(the capital), New Breton(a massive urban jungle sprawling with continent-wide cities) and Dunamis(sanctuary of Earth's surviving plant and animal species) colonies, which were also the first three worlds that humanity settled on. The Continuum uses Void Standard as its common clock denomination. Void Standard is based on Earth's time system of 24 hours and is used mainly on starships. The Continuum also uses a new denomination to count the years. Continuum Year 1, or C.01, started on 2964 A.D. and although official year count uses this denomination, majority of the people still use the old B.C./A.D. denomination. The Continuum currently has 37 member worlds, known as the Core, 106 subsidiary worlds (these worlds are recognized as allies but do not receive same privileges as the member worlds), and 12 contact worlds (known to exist but no formal diplomatic talks yet). These remaining worlds are colloquially known as the Fringe, and these regions are often rife with violence and barbarism, as Core privileges almost never reach these colonies. As a result, tensions between the Core and the Fringe are not uncommon. The Continuum became allies with the Interstellar Federation of Sentients during the dawn of the Tor campaign in 3203 A.D.

The Interstellar Federation of Sentients is a multiracial group comprised of various different species and was founded by the Promethean race in 12000 B.C.. While the ISFOS maintains a neutral alliance with the Continuum, the only race to have contacted, and remained in contact with us are the Sentians, a race of estranged humans taken by the Prometheans to fight their wars, and then later left to evolve and develop a civilization of their own. The ISFOS warns of hostile alien races plagueing the uncharted territories of the galaxy, and also prophesized the return of an ancient threat from beyond the galactic rim.

The Tors are an elven race that specialize in biological warfare. Not much is known of their kind, although there have been recovered data that suggests that they are divided into two subspecies, the Protos, the surface-dwellers, and the Neos, the spacefarers. The Protos have opposed the idea of interstellar expansion, as they believe that their homeworld is the only place for their kind, and due to that the Neos actively oppressed them to the point of submission. Most Tor soldiers are Protos, which the Continuum believes that they have been forced to submission in one way or another, while those of higher ranks such as generals and admirals are believed to be Neos. The Tors are known to be masters of biology and genetics, and their manipulation of such has been an integral part of their culture and warfare. Tors have an honor code similar to that of Japanese samurai, which ironically contradicts their style of combat. Most Tor constructs are semi-organic in nature and possess a neural link to its user for better harmony once it is used.