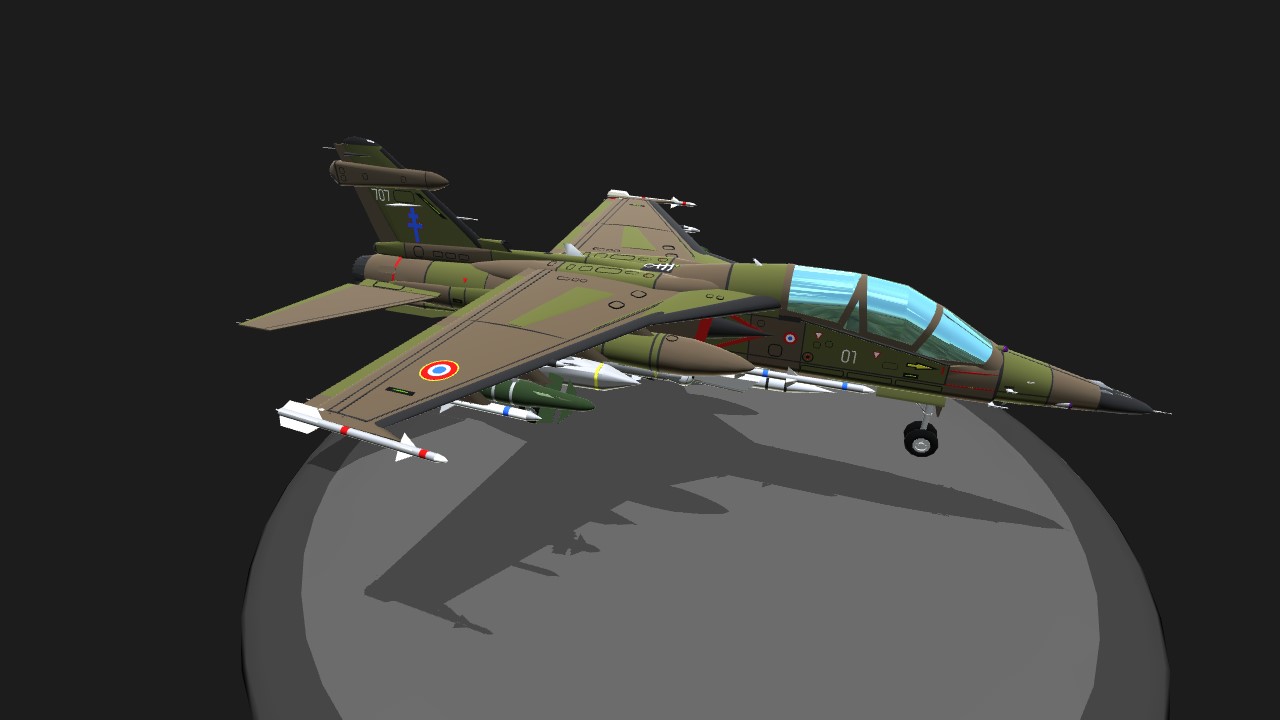 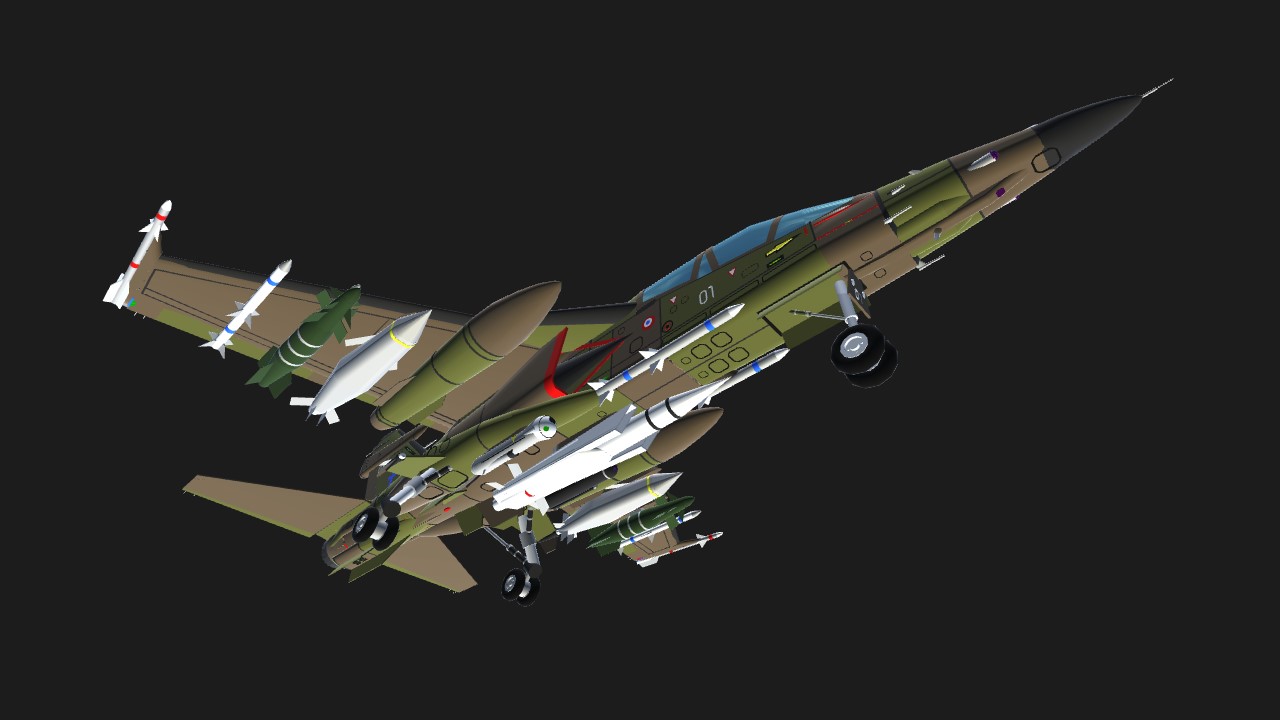 This is the French Air Force (Armeé de l’ Air) nuclear-strike variant of the Anglo-French fighter jet AF.11 Jaguar II. It is painted in the AdA pacific continental camo color scheme and it is equipped with the ASMP-A long-range nuclear-capable cruise missile, 2 x SCALP-EG cruise missiles, 2 x AASM/HAMMER 1.100lbs Guided bombs and MICA-ER/EM AA missiles for the pre-strategic strike role as a part of the Force de frappe (French for: strike force).

4) LDG INSTRUCTION
-Reduce Airspeed at 300mph and below
-Align with Runway at 1.500 ft Altitude and 2NM distance
-GEAR DOWN
-THROTTLE: 8-12% (depends on weight)
-TRIM: FULL DOWN gradually
-VTOL: FULL DOWN gradually
-Establish reasonable Rate Of Descent
-Airspeed 160-190mph (depends on weight)
-Make corrections using small THROTTLE movements (~1-2%)
-Maintain Attitude 1°-3° Nose Up
-At Touchdown: THROTTLE – 0% AND AG4 for Drag Chute
-When all wheels on ground and airspeed below 150mph - APPLY FULL BRAKES
-If any skidding occurs at touchdown, avtivate AG7 for Gyro-stabilization before applying full braking.

The AF.11N Jaguar II (also referred as Jaguar Atomique in French use) is based on the AF.11 Mk3B two-seat strike variant, but features considerable changes. The RB299 engine has been modified by SNECMA and delivered 15% more power, the airframe was strengthened for extremely low-level flight and fitted with an Antilope 95-NG radar, which is used for terrain following, navigation and ground mapping, and which can follow terrain as low as 20ft and at supersonic speeds. Other avionic features are twin INS units and moving map displays for both the pilot and weapon systems officer. The AF.11N can carry one ASMP-A medium-range nuclear missile, a mix of SCAPL-EGs stand-off missiles and HAMMER guided bombs and can also carry up to four MICA-ER/EM AAMs for self-defence. Other protection features include the SabreXR jamming system and the Spirale+ chaff/flare system. In order to attain higher combat range, a pair of external fuel droptanks are carried.

The first batch of 40 aircraft for the French Air Force had a sole nuclear capability, and these were designated AF.11N MK1N. These did not have the Spirale+ chaff system, and carried advanced telemetry equipment for the certification of use for the ASMP-A cruise missile. These aircrafts deemed the new strategic weapon as ready and fully operational. The later batch of 15 aircraft were designated AF.11N MK2N and had both a nuclear and conventional capability, and a full defensive fit. All the previous MK1N aircrafts now have been upgraded to the MK2N standard and have full conventional attack capability.

Dassault decided to further develop the initial AF.11 Jaguar II and re-designed it for long-range precision strikes with sophisticated conventional weapons and advanced nav/attack equipment. This aircraft is exactly the same as the AF.11, but introduces support for conventional attack missiles such as the Scalp missiles, as well as the AASM/HAMMER weapons. The first aircraft, converted from the AF.11 Jaguar II prototype, flew on February 2019, and the French Air Force ordered a total of 55 aircraft. The AF.11N MK2N is not licensed for export and The French Air Force has already incorporated the 40 out of 55 aircraft in its inventory.

Initially, the first AF.11N fighters have been transferred under the Strategic Air Forces Command operational control and have been assigned to the Force de Frappe, consisted of an airbase component of the Strategic Air Forces Command (Commandement des Forces Aeriennes Strategique (CFAS)) of the French Air Force, established in 1955 and operating already 40 Mirage 2000N-K2 bombers. These were considered as obsolete and marginal for the pre-strategic strike role and work began almost immediately on a replacement resulting in the AF.11N MK1/2N Jaguar II aircraft.

From 2018 the CFAS decided to dispatch major nuclear-capable air elements to overseas territory and especially in the Pacific region as a response to the ongoing tension at the Korean peninsula. France supported the UN Security Council resolution for the establishment of a no-fly-zone above North Korea and immediately sent 25 AF.11N Jaguars II nuclear-capable aircraft and 33 ASMP-A cruise missiles to the BA 376 at New Caledonia (special collectivity of France), part of the Pacific Air Defence/Strategic Command.
The AF.11N MK2N Jaguar II aircrafts have been assigned the role of 24/7 Combat Patrol and nuclear retaliation readiness in case of N. Korean nuclear attack. At any given time, a pair of AF.11Ns was in the air and conducted SIGINT/ELINT operations, carrying a remotely-activated ASMP-A nuclear-capable cruise missile and being air-refueled by USAF or AdA tanker aircrafts. 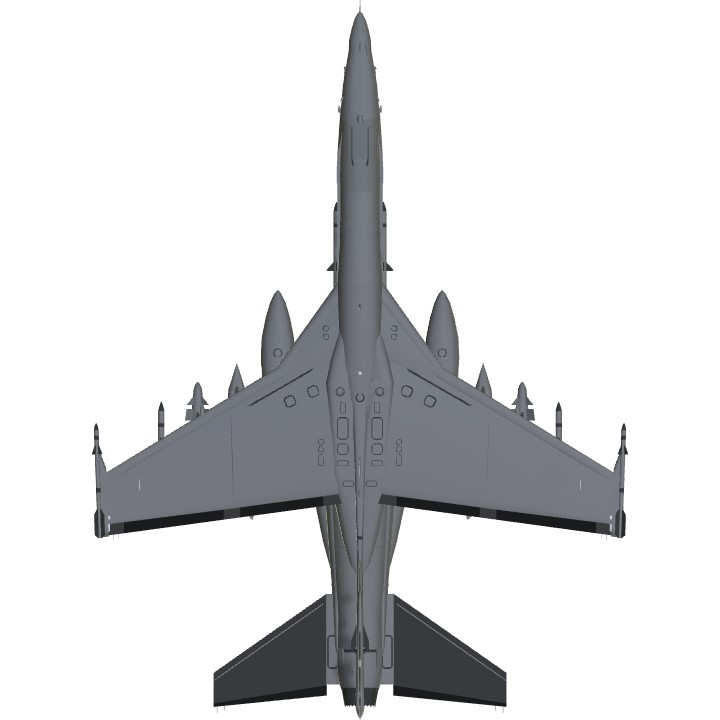 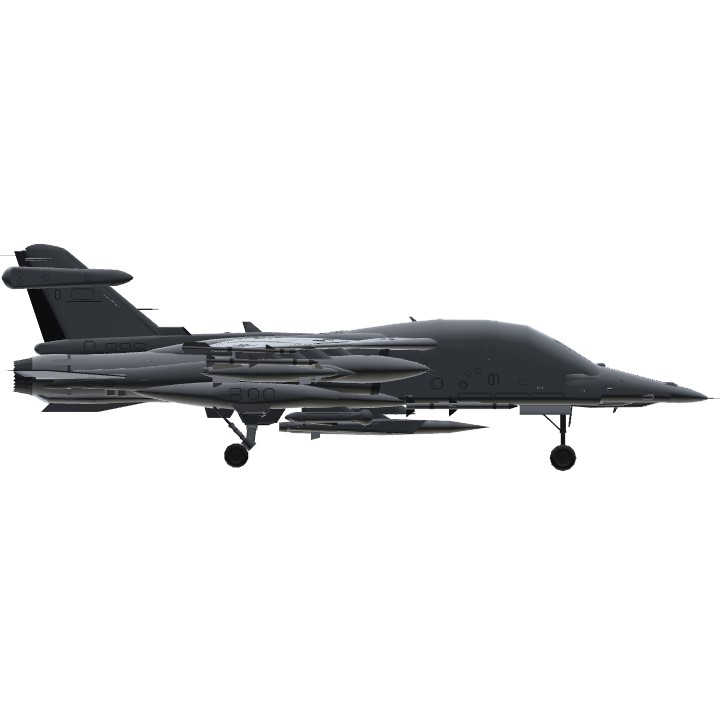 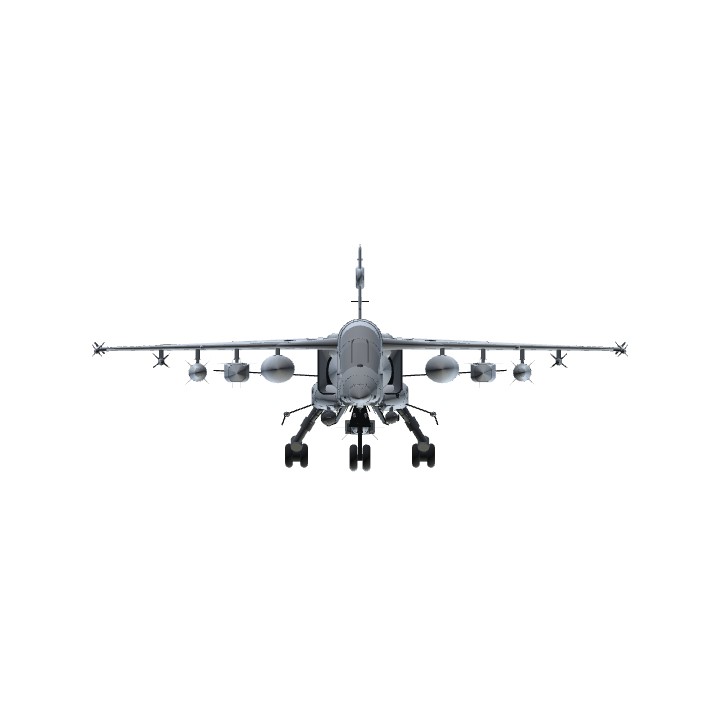