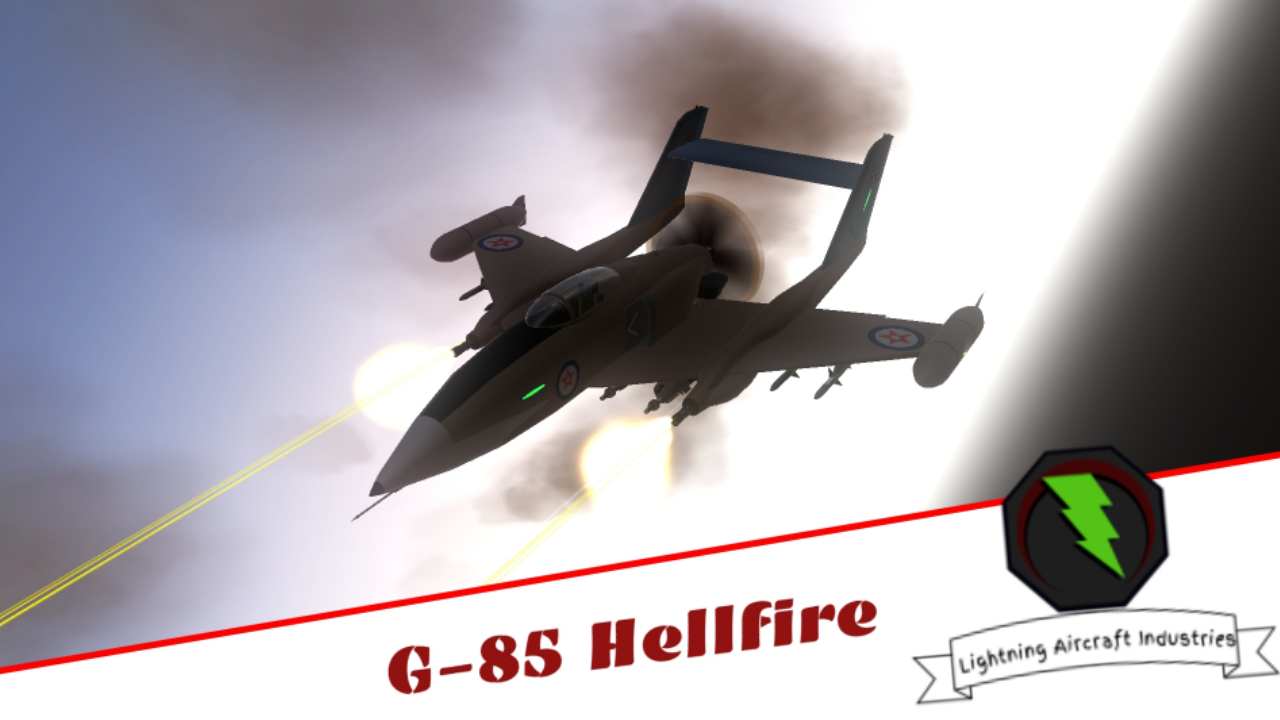 Thank you to @MaxTeoZ's free weapons pack and @EliteArsenals24 for the improved versions of these weapons.

This build does use the instrument and mechanical instrument mods. If you are on Mobile, download the plane and Undo, then Redo, and you obtain the plane without mods.

There is a trailer for this that I made, link is Here.

In 1999, the RSLAF's 1st Attack Group 'The Pyramids' were in need of a new aircraft to go alongside the GR-2 Nebula as the one aircraft could only do so much on its own. So a more shorter-range Close Air Support which was more capable as the job was requested from Lightning Aircraft Industries, and they sure did deliver.
In 2002, the first G-85 Hellfire rolled out of its hanger to the watching crowd, and it left a very good impression.

The G-85 was a turboprop pusher aircraft with a contra-rotating propeller setup which oddly enough, had a swept wing with a sweep angle of 45 degrees. To provide more lift and better aerodynamics with the flaps deployed, split flaps were used.

In terms of Firepower, the primary armament consisted of 2 x 12.7mm nose-mounted machine guns and 2 x M61 Vulcan rotary cannons mounted in the front of the tail booms. It had the two machine guns because even though the M61's could be used to shoot down enemy aircraft, they weren't the most accurate, and the machine guns were only there if the pilot ran out of missiles.

Speaking of missiles, the secondary armaments usually consisted of 4 x AIM-9 Sidewinder AAM's. For attacking targets on the ground, the G-85 carried 4 x GBU-12 Paveway II 500lbs laser-guided bombs and 2 x rocket-pods. This loadout could be exchanged for many different weapons.
There were also 96 countermeasures, made up of both Flares and Chaff.

For Takeoff, lower flaps to takeoff position, put in a little Trim and turn the lights on. Ignite the engine and throttle up 100%. When you reach 146 Kts GS, lift the nose up and climb away. Retract the gear and flaps, then Trim as needed.

For Landing, approach at 120 Kts GS with Landing Flaps and Gear extended. Use the Airbrake, Throttle and Pitch to maintain 120 Kts GS. Upon reaching the runway, cut the power and flare so you touch down at 108 or 110 Kts GS. What the design is based upon. With the bombs, make sure you aren't very far away from your target. They also function the same way as missiles, as they use the Inferno missile.
With the Sidewinders, make sure your target is in front of you and you aren't pulling hard G's, otherwise it will probably get stuck on the fuselage until you shake it free.
You can have a go at shooting an aircraft with the Vulcans, but it's not easy if they are in the air, flying all over the place. 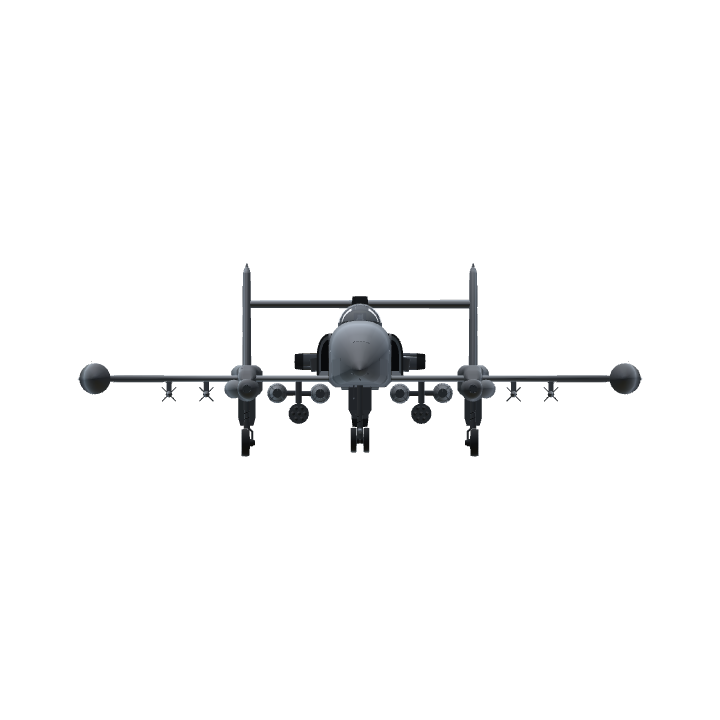