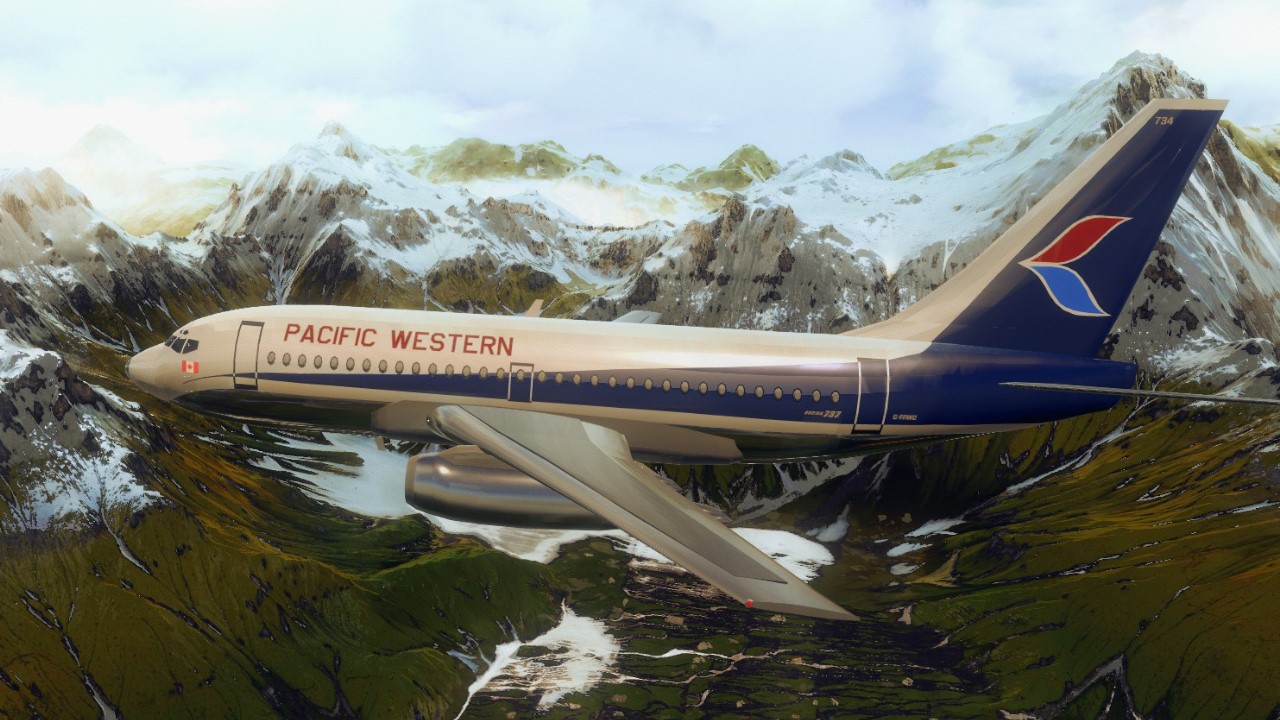 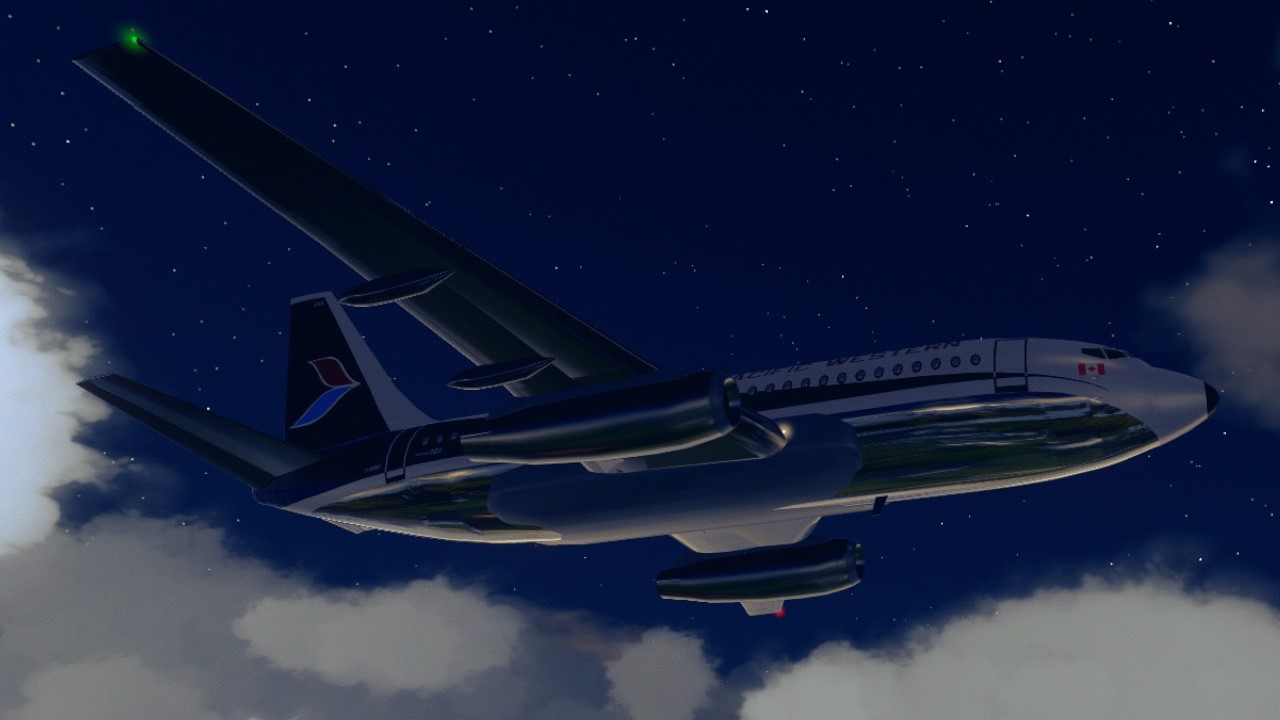 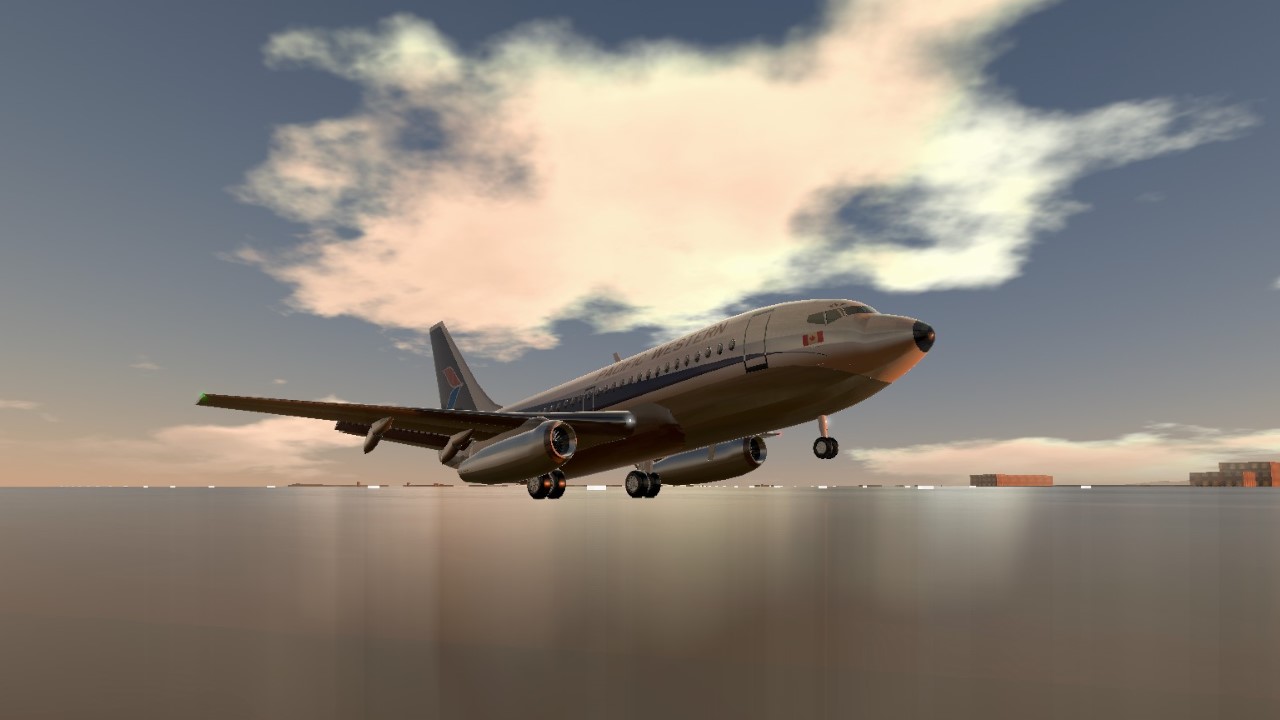 Controls are in game

The Boeing 737 is a narrow-body aircraft produced by Boeing at its Renton Factory in Washington. Developed to supplement the Boeing 727 on short and thin routes, the twinjet retains the 707 fuselage width and six abreast seating with two underwing turbofans. Envisioned in 1964, the initial 737-100 made its first flight in April 1967 and entered service in February 1968 with Lufthansa. The lengthened 737-200 entered service in April 1968, and evolved through four generations, offering several variants for 85 to 215 passengers.

The 737-200 was a 737-100 with an extended fuselage, launched by an order from United Airlines in 1965 and entered service with the launch customer in April 1968. The 737-200 Advanced became the production standard in June 1971. Boeing also provided the 737-200C (Combi), which allowed for conversion between passenger and cargo use and the 737-200QC (Quick Change), which facilitated a rapid conversion between roles. The 1,095th and last delivery of a -200 series aircraft was in August 1988 to Xiamen Airlines.

After 40 years, in March 2008, the final 737-200 aircraft in the U.S. flying scheduled passenger service were phased out, with the last flights of Aloha Airlines. The variant still sees regular service through North American charter operators such as Sierra Pacific, Canadian North, Air Inuit, Nolinor and Chrono. Cargo variants continue to operate today such as Transair and Aerosucre, while passenger variants can be found in second and third rate airlines of developing nations such as Air Zimbabwe.

The classic cockpit of a WestJet 737-2A3 (Registration C-GWJO) at Newcastle International Airport (ICAO: EGNT/IATA: NCL)

Pacific Western Airlines Ltd was an airline that operated scheduled flights throughout western Canada and charter services around the world from the 1950s through the 1980s. It was headquartered at Vancouver International Airport in Richmond, British Columbia, until 1974, when the head office was moved to Calgary, Alberta. Pacific Western Airlines was a pioneer in the aviation history and known for its ability to profitably operate short haul air routes. Pilots provided air service to remote mining camps and logging operations in the North, delivering men and materials to isolated destinations.

It was in 1949 that PWA predecessor Central B.C. Airways was commissioned to do aerial surveys for the giant aluminum and power complexes at Kitimat and Kemano in the rugged mountainous backcountry of British Columbia. During the development of this project, Central B.C. Airways handled 95% of the air support, consisting mainly of heavy industrial freight and workers. Between 1949 and 1952, the company acquired seven other smaller flying services. With each acquisition, the company expanded its base of operations, providing the much needed manpower and equipment necessary to maintain a rapidly expanding air service. In 1953, the company adopted the name Pacific Western Airlines. In 1959, Pacific Western was part of the largest single transfer of scheduled services in Canadian aviation history. In that year, Canadian Pacific Airlines released licensed routes from Edmonton to 18 points in Northern Alberta and the Northwest Territories. With this transfer, in addition to its existing routes, Pacific Western was licensed to provide scheduled air services over approximately 7,000 miles throughout Western and Northern Canada.

In 1966, in anticipation of a regional air policy for Canada, Pacific Western began placing orders for jet and turboprop equipment. The regional policy became a reality in 1968, and the company was able to add many more ports of call to the already long list of destinations in Western Canada. Services at this point stretched from the U.S Pacific Northwest to the Arctic Archipelago.

Boeing 707 equipment was added to the fleet in 1967, and Inclusive Tour programs were introduced to Mexico and Hawaii in the winter, with several European destinations served during the summer, all on a charter basis. The addition of a cargo model Boeing 707 meant that livestock and perishables could now be carried all over the world. The company aircraft visited more than 90 countries during this period of time. Pacific Western operated a worldwide Boeing 707 cargo and passenger charter program until the last aircraft was sold in 1979.

In November 1968, the company introduced jet service on its scheduled route system with the delivery of its first Boeing 737-200 jetliner. Pacific Western was the first Canadian carrier to order the 737. With larger equipment such as the Douglas DC-4, Douglas DC-6, Convair 640, Lockheed L-188 Electra, Boeing 727-100C and Boeing 737-200, Pacific Western provided scheduled air service throughout British Columbia, Alberta and the Northwest Territories. By 1969, the "Chieftain Airbus" shuttle service between Calgary and Edmonton was being flown with Boeing 737-200 jets, Convair 640 turboprops and Douglas DC-6 propliners.

As the 1970s progressed, the airline's equipment varied and the company began a fleet rationalization program, concentrating on the 117-seat Boeing 737-200 as the backbone of the mainline fleet. During the mid 1970s, Pacific Western was operating Boeing 727-100C jetliners in addition to its Boeing 737-200 and -200C aircraft. By the late 1970s, the company operated an all-jet mainline fleet.

Pacific Western Airlines Flight 314: When Being Ahead Of Schedule Goes Wrong

The accident aircraft (Registration C-FPWC) at Vancouver International Airport in May, 1977.

On February 11th, 1978, a Boeing 737-275 registered as C-FPWC was operating as Pacific Western Airlines 314 with a flight from Edmonton International Airport to West Kootenay Regional Airport (ICAO: CYCG/IATA: YCG) with a first stopover at Calgary International Airport and a second stopover at Cranbrook/Canadian Rockies International Airport (ICAO: CYXC/IATA: YXC). Onboard are 49 occupants, 44 passengers, 3 flight attendants, and 2 pilots. In the cockpit is 30 year old Captain Chris Miles with 5,173 flight hours, 2,780 hours of which were on the Boeing 737, and 25 year old first officer Peter Van Oort, with 1,316 flight hours, 81 of which were in the 737. At 12:32 local time, the aircraft departs Calgary for Cranbrook.

Anyone living in northern latitudes knows that winter months can be unpleasant, and this day was no different with heavy snowfall and visibility at only 3/4mile/1.21km. On the runway at Cranbrook is a snowplow and its operator Terry George, who receives the ETA of incoming aircraft so that he can remain on the runway for as long as possible to continue to remove snow. Calgary gives Cranbrook and estimated ETA for PWA 314 of 13:05. It should be noted that Cranbrook was not a controlled airport at the time, and only possessed ground equipment and an 'aeradio' operator which updated weather and runway conditions.

The standard approach into Cranbrook involved pilots making a loop around a radio beacon known as the 'Skookum Beacon' several miles north of the airport, which would then bring them straight in to the airport. This maneuver added several minutes to flights. Pilots were supposed to report passing the beacon and reporting when they were on final approach. At 12:46 whilst descending from FL180, PWA 314 contacted Cranbrook Aeradio and was passed the latest weather and runway information. Cranbrook Aeradio then advised Flight 314 that there was a snowplow out on the runway removing snow. First Officer Van Oort acknowledged this information.

For unknown reasons, Captain Miles decided to not to the standard circle maneuver around the beacon and instead come straight in to Runway 16. This put the aircraft on a new arrival 10 minutes ahead of time of their 13:05 ETA. Captain Miles also did not report passing the beacon nor reporting that they were on final approach, so Terry George had no idea that a 737 was incoming earlier than expected, and thus, was still on the runway.

An Oshkosh Snow Remover similar (or at least I think) to the snowplow.

At 12:55, PWA 314 touched down about 800ft/240m from the runway threshold. The pilots did not see the snowplow due to poor visibility, as well as the fact that the snowplow produced a plume of snow which obscured it. The throttles were reduced to idle and reverse thrust was engaged, deploying the two thrust reversers. The process of the reversers opening took about two seconds.

However, two seconds later and at a distance of just 1,000 ft/304m from the snowplow, the crew spots the plow. At the same time, Terry George saw the 737 coming straight at him and desperately swerved the snowplow to get out of its way. Captain Miles immediately disengaged reverse thrust and both pilots pushed the throttle levers all the way forward and pulled back on their control columns to get the 737 back in the air and go around. The pilots pushed on the throttles so hard that Captain Miles fractured his thumb. The 737 passes over the snowplow by only about 50ft/15m.

About six seconds after going around and 4,000 ft/1,200 m from the runway threshold and at an altitude of 300 to 400ft/91 to 122m, the increased airspeed and aerodynamic forces cause the partially open left thrust reverser to blow open and redeploy. This causes the plane to yaw hard to the left and drastically reduces the airspeed of the aircraft. Evidence indicates that First Officer Van Oort took off his seatbelt and stood up to flick the reverser override switch on the overhead panel which would restore hydraulic pressure to the reverser to close it. However, in the intense situation, he missed the switch. At this point the situation was unrecoverable. The airspeed had dropped so far that no amount of aileron or rudder could save the plane. Flight 314 banked steeply to the left, effectively cartwheeling whilst airborne. Just ten seconds after going around, the 737 crashed to the left of the runway into a snowy embankment banked 90 degrees to the left and 30 degrees nose down.

The aircraft splits into three main sections in the impact and the subsequent intense fire engulfs the main fuselage body, leaving only the cockpit and the tail section as recognizable parts of the aircraft. Terry George got out of the snowplow and he with two airport firefighters rushed towards the crash site. Miraculously, several people survived, but of the 49 people onboard, only seven survived the initial crash, six passengers and one flight attendant with one survivor succumbing to a severe head injury several days later, leaving only six survivors.

The subsequent investigation was conducted by the Aviation Safety Investigation Division of Transport Canada. The Cockpit Voice Recorder was destroyed by the intense fire but the Flight Data Recorder was useable though some parameters were unreadable. Later simulations showed that the aircraft was controllable with one engine at idle reverse and the other at full forward thrust in a gear up, flaps 15 configuration. However, with flaps 25 and gear down, the configuration the aircraft was in, it would have been impossible to maintain level flight. The ultimate cause of the accident was determined to be Pilot error and ATC error, as well as the deployment of the thrust reverser during the go around.

The burning wreckage of the middle section.

First responders at the crash site.

Well then, this one was certainly interesting. This was my first request aircraft that I wasn't too keen on doing until I looked more into the accident. I had actually started this a few months back alongside my Air Transat A330. However, I postponed it to finish the A330 and the Japan Airlines Cargo 747 Halloween Special. So technically, this one has been a few months in the work... Yah this livery was painful to make, especially that little curved, tapering blue stripe on the nose. As always, supplementary reading will be included below. Safe flying! 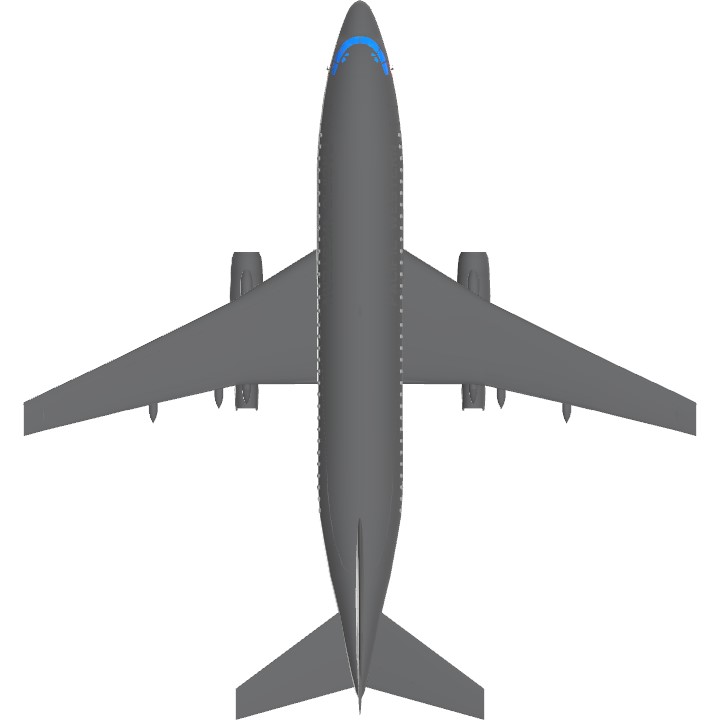 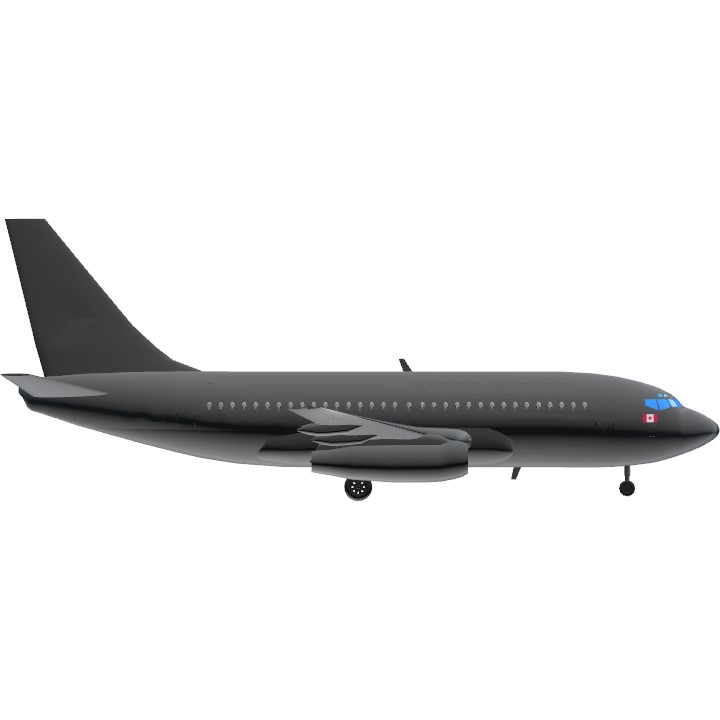 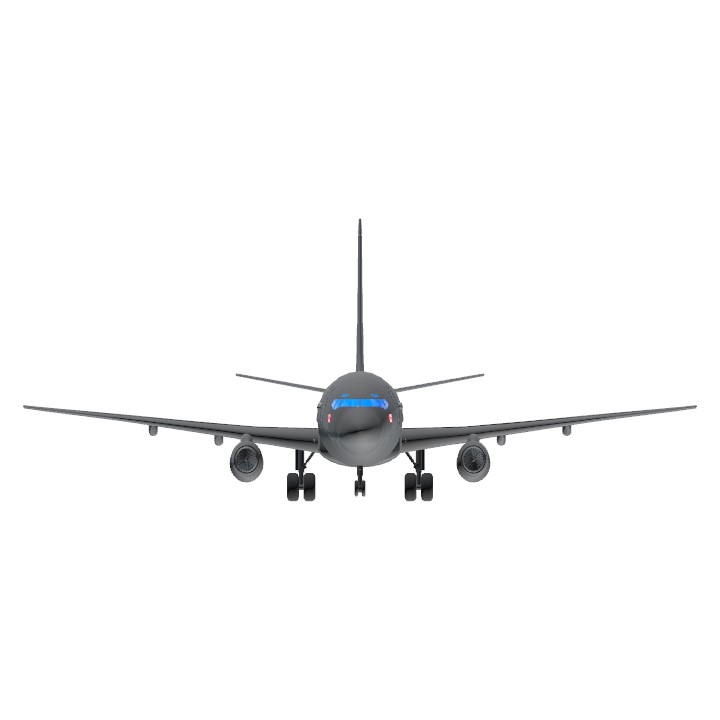