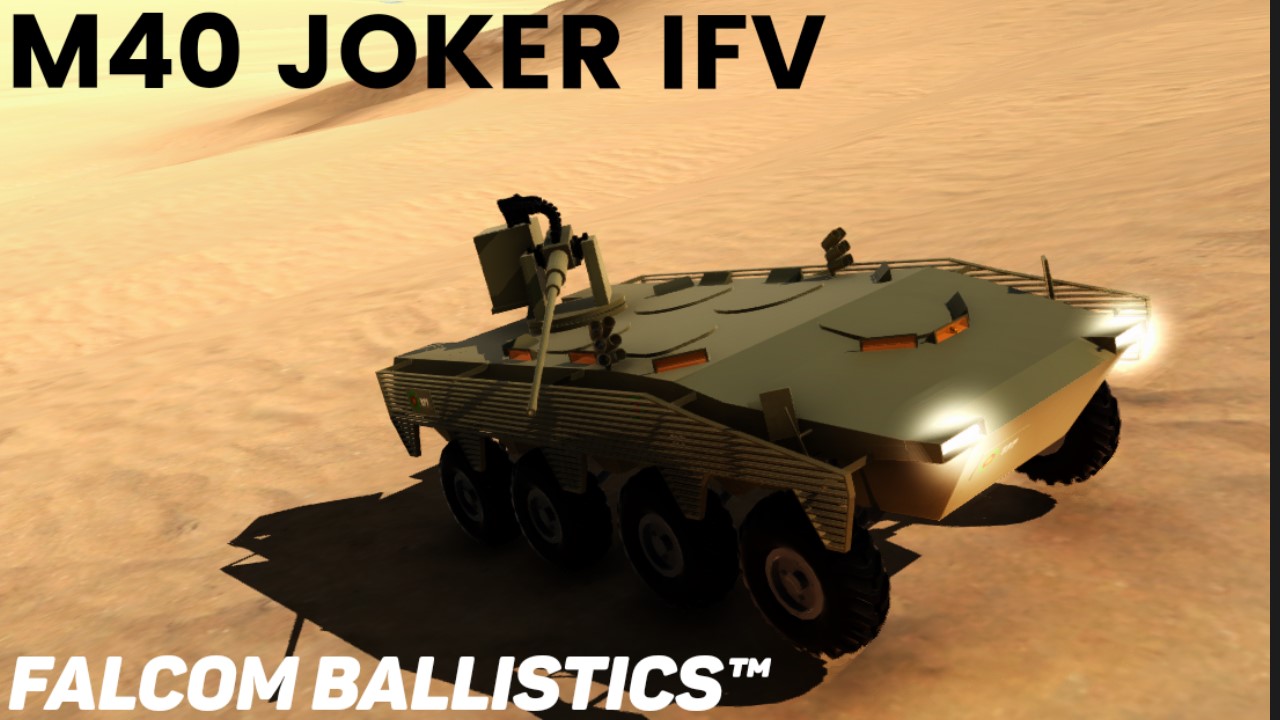 M40 Joker (1st Combat Division, Platoon 177) engaging a hostile convoy on the island of Maywar
The M40 Joker is an all new combat vehicle equipped with some of the latest in technological advances, sporting the brand new T-25 Grim Reaper autocannon, launchers that fire smoke grenades (These grenades double as flares too, to confuse incoming ATGMs), and a gyroscope to keep you stable at high speeds. Being able to carry up to 6 armed troops comfortably (minus driver, commander, and gunner), this vehicle will often be seen working in tandem with the more heavily armed and armored Valkyrie II MBTs (Not yet released), like the US Abrams and their Bradleys, or the Russian T-90s and their BMPs.

T-25 Grim Reaper
A 25mm autocannon capable of firing APFSDS or SLAP munitions at speeds up to 600RPM. Gun laying is relatively easy while in motion with an integrated 2-plane gun stabilizer. This gun is traversed horizontally by use of the Yaw keys (PC users), or the Yaw motion on the left joystick (Mobile users). For elevation, the Trim keys (PC) or Trim bar (Mobile) are moved up and down for their respective motions.
Traverse range: +/- 180°
Elevation range: +65°, -13°
Stabilizer range, vertical: +/- 10 degrees from center
Stabilizer range, horizontal: +/- 180° from center
M19 Smoke grenade launcher
Grouped in sets of 6 on either side of the hull, these smoke grenades will not only provide some cover for your vehicle, but will also confuse and interfere with the systems of incoming ATGMs and other guided projectiles.
Activation: AG-6 + Ground weapon selection
Charge count: 16 charges (Launches 12 grenades at a time)
Chemical Shell Shield Mk I
Around the Joker is a form of cage to protect against projectiles that use chemicals to deliver their payload, such as HEATFS and RPGs.
Protects against: Shaped Charge projectiles and High Explosive shells containing less than 1kg of TNT or equivalent
Viewport placement
Located along the top of the body, there are 11 periscope viewports for near-360° view. Three ports are located around the Driver's hatch for up to +/- 45° visibility in front of the vehicle.

Credit to Tucan for these amazing and cinematic pictures!

M40 Joker as it crests a hill during a mission

Another angle of the same picture above, you can see the numbers designating it to 177th Plt.

Similar position as the prior two, involving the same M40, named "Mr J" by its Commander, Major John Deaux

The shield is more visible from this angle, showing off the grill style design

The Joker, however advanced in other areas, lacks a detailed sight. However, even a REGULAR sight is not needed if you have the skill

Tucan (Pictures)
All the folks in the SimplePlanes Skipper's Chat, which includes Tucan, fortunately, so double kudos 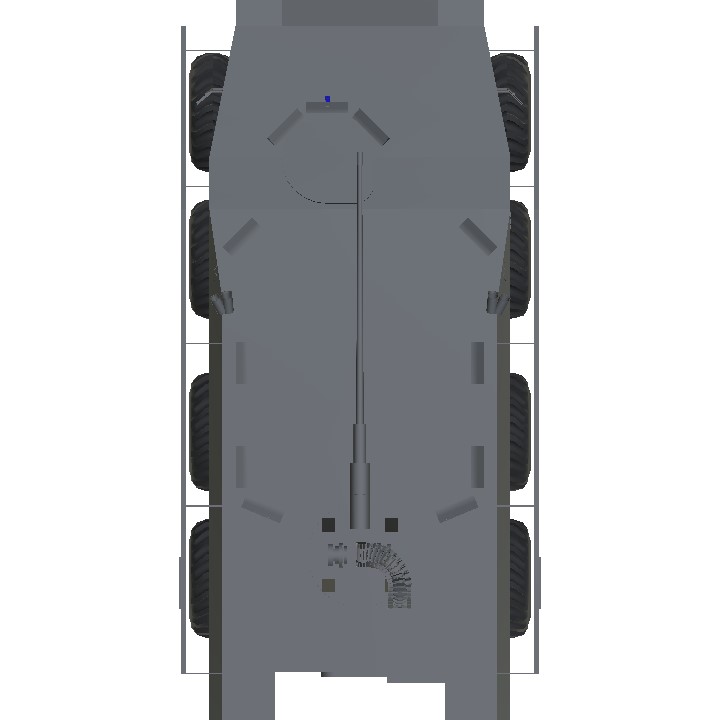 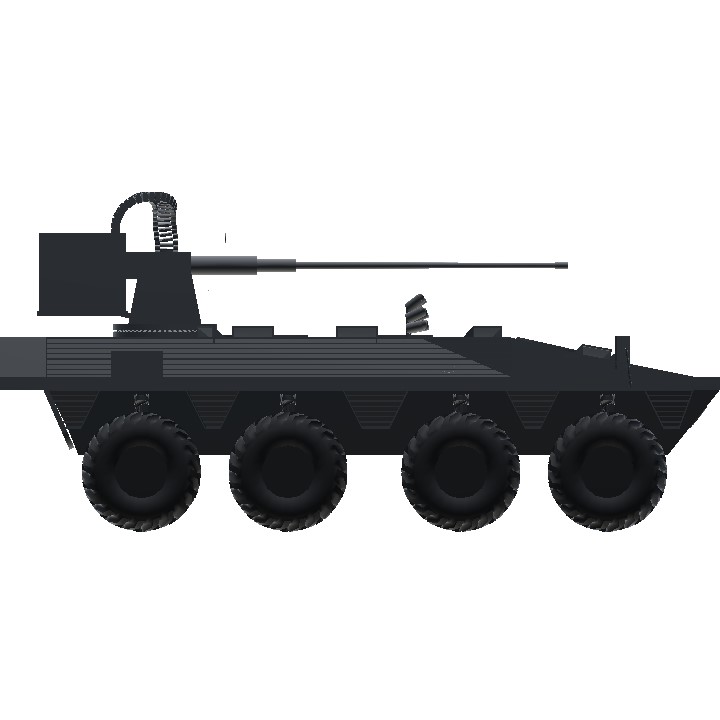 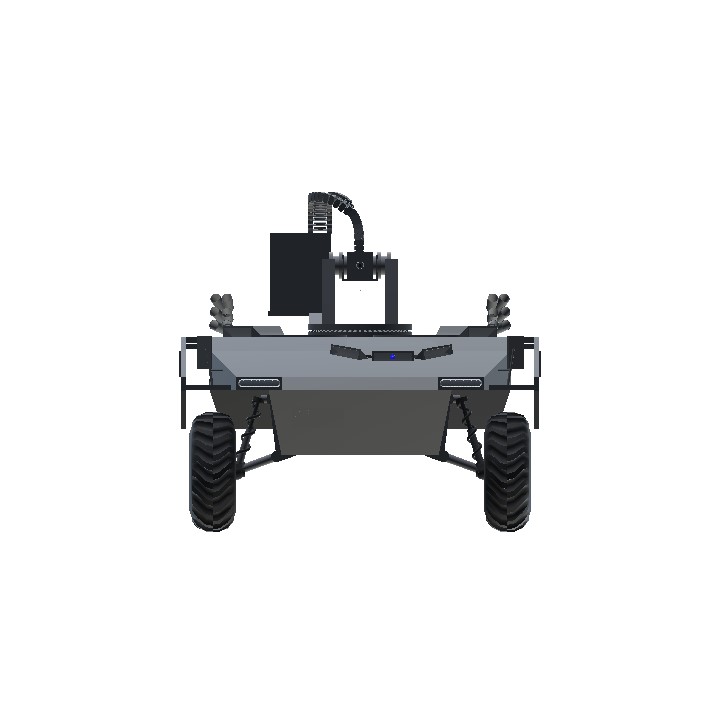