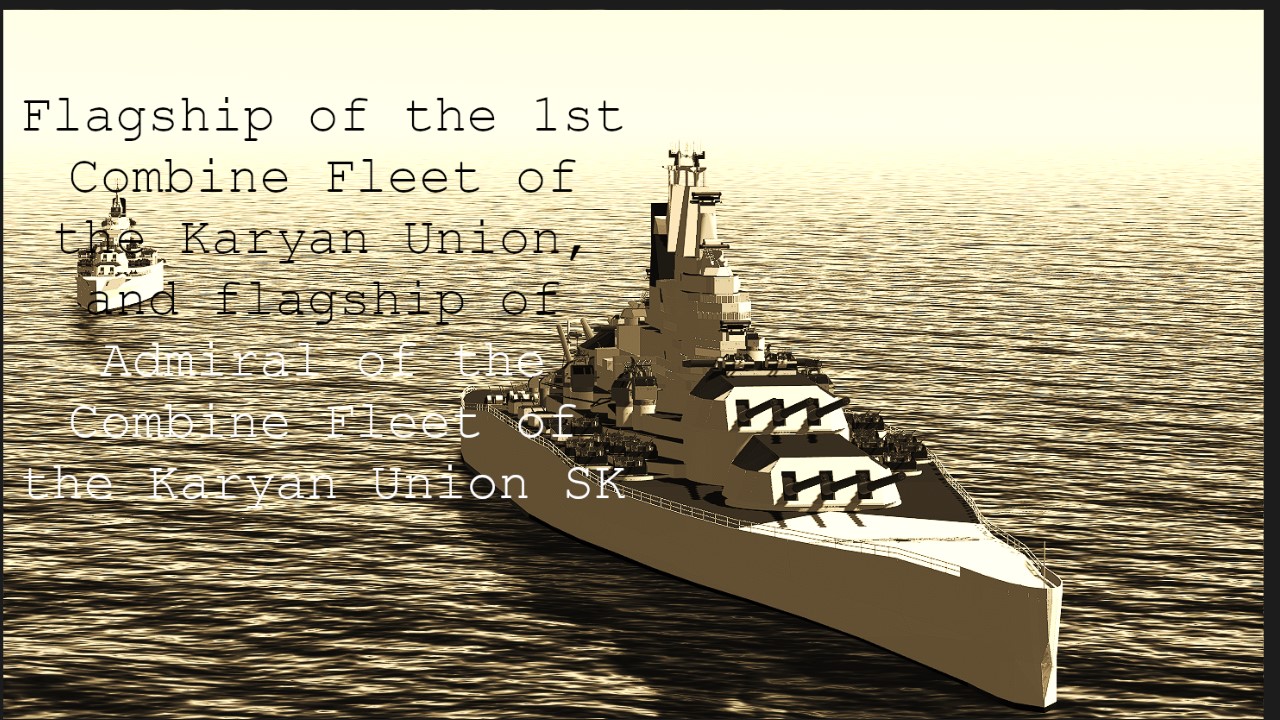 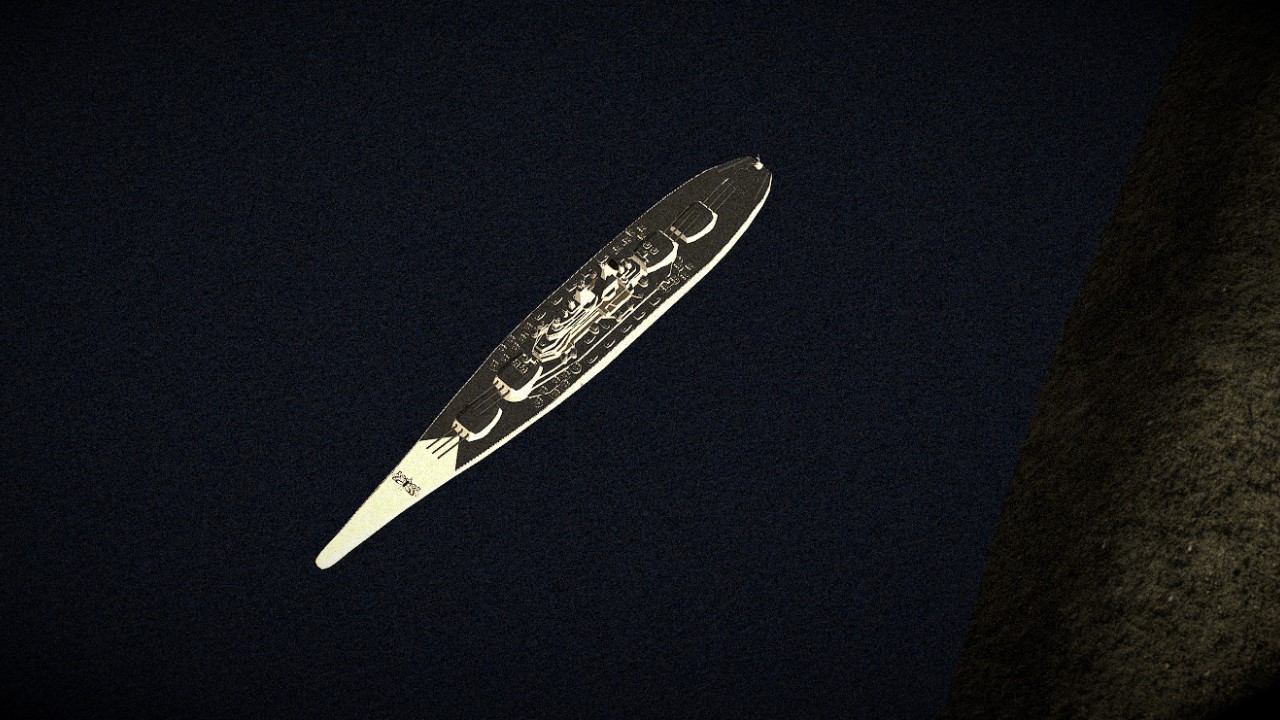 "She had a maximum speed of about 38kn, we can barely comprehend it."
-Admiral if the Combined Fleet of the Karyan Union, Saki "SK" Yoshida

In the Karyan Union, it was widely evident that a battleship that could crush numerous other battleships at the same time was to be needed. In the mid 20s, as the Karyan Union had found out about the other battleships that everyone else was making, decided to 10-up the competition. A high speed super battleship was required. It was primarily meant to be able to control the engagement against squadrons of battleships, destroy them before a slugging match had even begun, and survive said slugging matches. For this, a special design was brought up.

What resulted was a new and unique battleship. Weighing over 120,000ts, a maximum speed of 34.5knots/63.9kph/39mph at standard load, and a maximum speed of 38-40kn at light load. A belt of 51cm/20 inch at the thickest parts down to 40cm/15.74inch. While having twelve 51cm/20inch 55 caliber guns. Though the Eotus were powerful ships, their design was changed, within the first batch of three.

"You make sure you don't have to stand up in a fight against the enemy, you pack the biggest possible punch and guns you've got, the most accurate targeting system you've got, and you make sure you decimate them before they can fire enough at you to hit you." -Dr.Alexander Clarke

Since the early 1900; she Karyan Union has been fed up with being in a battleship race. So they devised a plan. With the large cruiser fleet that the Karyan Union had, it believed that it had to make an announcement in 1931 to the participants of the dreadnaught race. To tell them to fck off, you're not getting to me.

What resulted was the most powerful battleship that the Karyan Union built up to that point. Just 8 years before, the Fabellan 60,000t H27 class battleships begun construction in Karyan yards as part of the program, but the Karyans were not stupid and responded with the Nymi class Fast Battleships. These battleships were a new kind of fast battleships, they were fast and heavily armed, but their armor was abysmal. Though it was capable of reaching 33kn/61kph/37.9mph and it was armed with 9 51cm guns, mounted in three 3-gun turrets.

in 1915, the Karyan Union heard news that a country has been thinking about a 50cm armed battlecruiser. When this word came to the Karyan Self Defence Fleet, both the high command and the politicians had an agreement for a program. In 1917, the government approved the program, and the first upgrades to the infrastructure were started in 1921.

The concept was a unique one. The primary purpose of the Eotus was not to slug it out in a battle line, but to essentially prevent battle line engagements by preventing wars. Because of its role, it is armed with large and generous spaces for holding diplomats. That is why it is a unique ship, as it has facilities that would be found in cruise liners.

The Eotu class battleships were highly impressive ships, as their large size and excellent facilities, it was considered by many people as a battleship with a hotel built in. The ship has a highly rugged construction and is a wonderfully crafted ship. However, people are very aware that it is not an unsinkable ship, however, it was a ship that is really difficult to sink, as its systems were redundant and flawless. Since the designers worked in conjunction with the fleet, the Eotus proved to be liked by the men serving aboard.

The keels of the first 3 were laid in 1934, all were launched in 1936 and commissioned in 1937. The fast construction of the ships were thanks on the shipyards part, as they have been highly skilled at producing large and powerful ships. However, do not assume that they have cut corners, as when the Eotu was first inspected, the inspector could hardly find any things to list down.

The Eotu class were tasked with being the flagship of the Karyan Union's combined fleets. The KSDF has 3 combined fleets, West Coast, North East and South East Fleet. All have their respective battle fleets. Their stories begin in 1937, when they are commissioned.

Thorttle - Throttle
Roll - Rudder
Trim and VTOl - turret
When launching, let the ship settle in the water and then turn on the throttle. 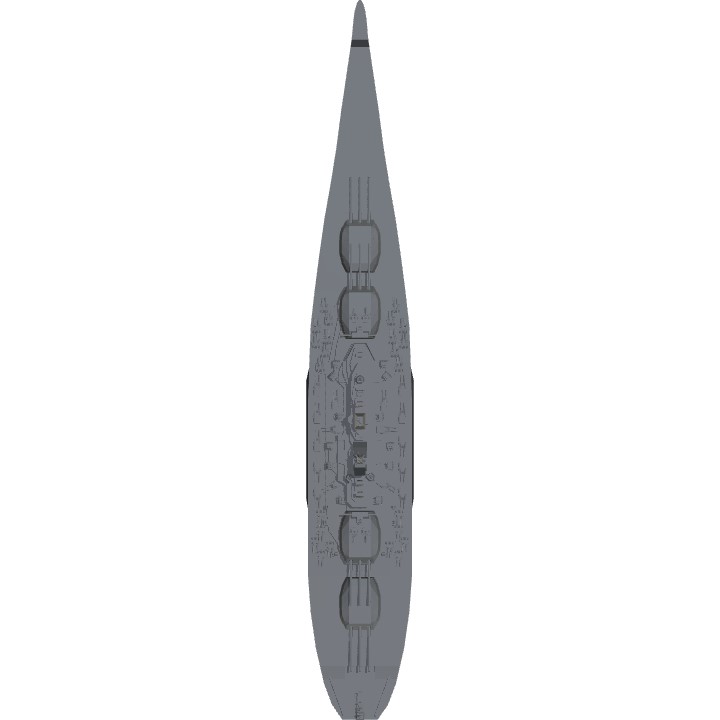 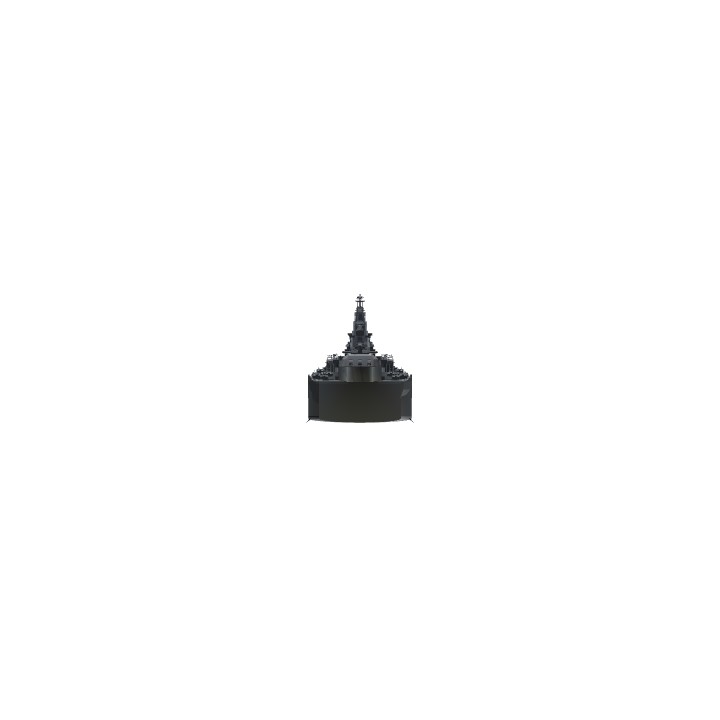