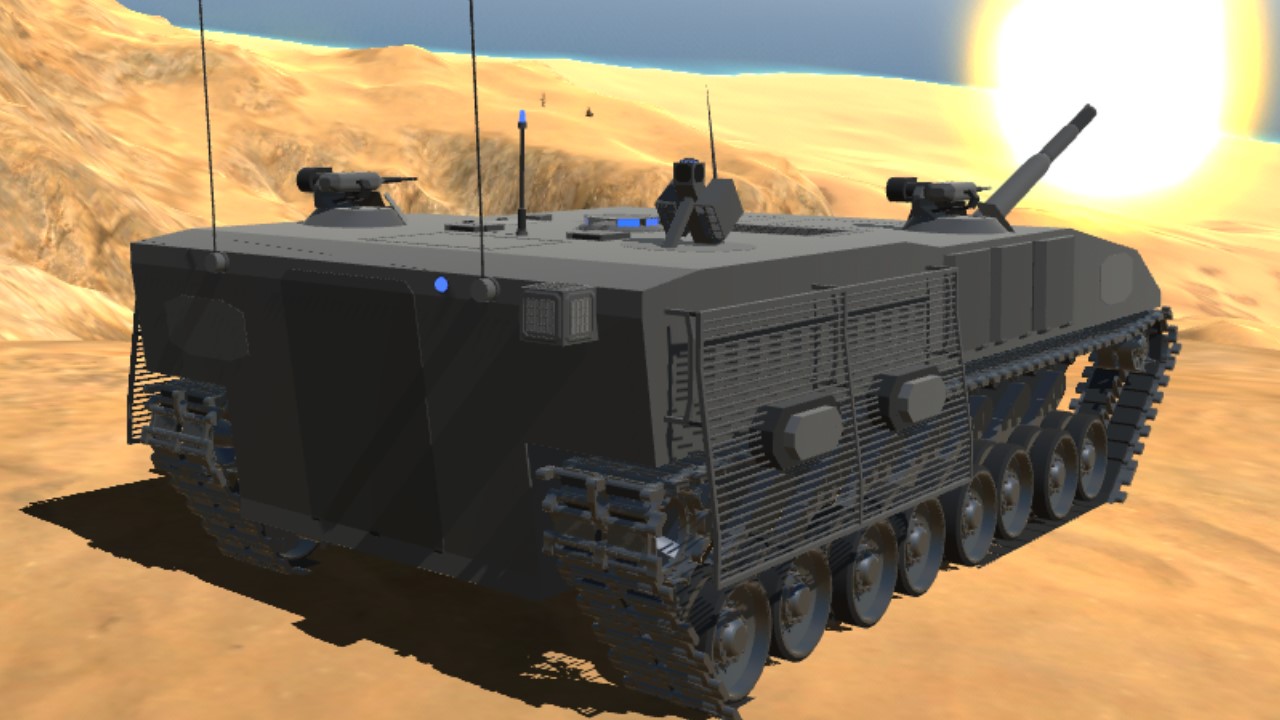 Collaboration build by MrVaultech and Typhoon.

The AIS-03 Dominion is a heavily armoured tank destroyer designed for the Saltwater Army to serve as a fire support vehicle and long-range anti-armour unit. Produced by Typhoon and MrVaultech.

The Dominion is a radically new tank destroyer built by the Größere Preußische Designuniversität and Rheinmetall-Ost as a derivative of the Othmar Advanced Armor & Weapons Testbed (OAAWT) technology demonstrator for use in the New Saltwater Republic's armored forces.

The radically different design of the AIS-03 Dominion offers amazing frontal protection for the entire crew and passengers. Also because of this, the vehicle was split into three major compartments, listed and detailed below:

The fore-most compartment of the vehicle, this is where the main gun is. A modified Rheinmetall-Ost Rh-128A7A1 is mounted with a relatively experimental ETC firing mechanism for use of traditional 128mm shells at higher velocities and more consistent shot placement at range. Additionally, the gun was modified to carry an autoloader mechanism since no crew will be stationed in this compartment during combat. Though, if needed, the gun is dual purpose and can be accessed by one of the two access hatches and manned by a sole gunner/loader, but it's unlikely accommodations inside the compartment will be great for him. Otherwise, the gun is entirely remote controlled.

Lastly, the Rh-128A7A1 is mounted to where it can traverse inside the compartment, something likely not seen since the Second World War on a main combat vehicle. The vehicle offers 15° traverse to each side, with a +20°/-9° elevation/depression.
Various types of ammunition can be carried, including high explosive and APFSDS shells. As the design matures in service laser-guided shells are expected to be introduced.

A large panel can be opened by crew above the engine and fuel tank for easy and quick access for mechanics and engineers.

The rear-most compartment holds all the crew and passengers, thus affording the greatest protection from frontal attacks.

There are only three crewman who need to operate the vehicle; gunner, commander, and driver who all sit in the front of the compartment. From here, the three crew command the vehicle via various optics and screens that offers a nearly 360° view of the vehicle exterior, as well as many means to exit the vehicle safely.
Up to six passengers and their equipment can be seated in a sub-compartment behind the crew, with access provided by a large rear door. In regular service the compartment will hold four field maintenance crew and a two-man mortar team.

Various pieces of equipment were added to to the exterior of the vehicle to assist the passive defensive equipment inside the vehicle.
One of the most prominent pieces of equipment added is the Saltwater Republic's Midnight-1 Hard Kill APS (with AESA radar inserts around the vehicle), which was most prominently shown on the GT-6 Cheetah MBT, and the M.A. RCWS prominently mounted across a number of Ostpreußen combat vehicles. The RCWS is 15mm in calibre and is controlled by the commander from inside the vehicle. The turret are used against soft targets at ranges out to 1.5 kilometres.
Several defensive mines are placed around the vehicle to thwart possible attempts by enemy infantry to overtake the vehicle.

The AIS-03 Dominion outside of combat is designed to travel either via trailer, or in reverse as to not have the gun catch onto any objects or other vehicles. The gun can be entirely removed from it's mounting to reduce vehicle length and placed on either a supply vehicle, or the roof of the Dominion, though at the cost of recalibrating the gun sights and balance of the gyro stabilizer.
Due to the unusual nature of the vehicle design, and its speed of 53 miles per hour, the transmission was designed to allow it's top speed be reached easily in both forward and reverse. This allows the vehicle to retreat from a firing position, then quickly reposition to re-engage on its own terms, which is where the vehicle design will shine most.
The Dominion is also intended to serve as a support vehicle when cooperating with larger formations, and as such has a large amount of internal storage space for ammunition, equipment and supplies to support both the crew and vehicle.

The AIS-03 Dominion was designed from the outset to maximise crew protection, especially from frontal assaults. The forward armour consists of three 250mm layers of spaced Chobham armour, with NERA inserts. Behind this but forward of the fighting compartment is a layer of Kevlar splinter protection. Aft of the fighting compartment but forward of the engine compartment is a layer of ceramic plate armour and another layer of Kevlar splinter protection. Just before the crew compartment is reached there is more ceramic armour and Kevlar. The side of the vehicle is protected by a single 250mm Chobham armoured layer and six ERA folding plates, with bar cage armour by the crew compartment. The rear of the tank is armoured with 75mm of Chobham and the tank roof has 140mm. 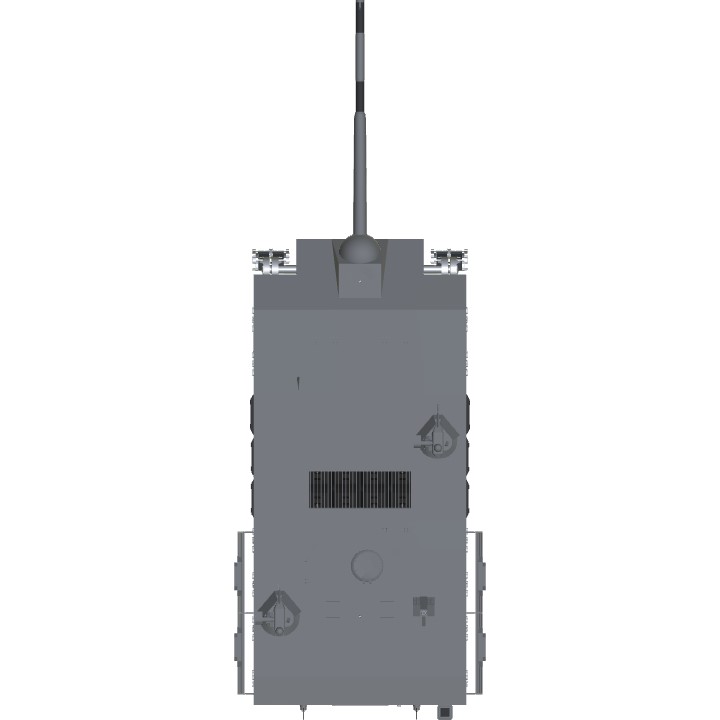 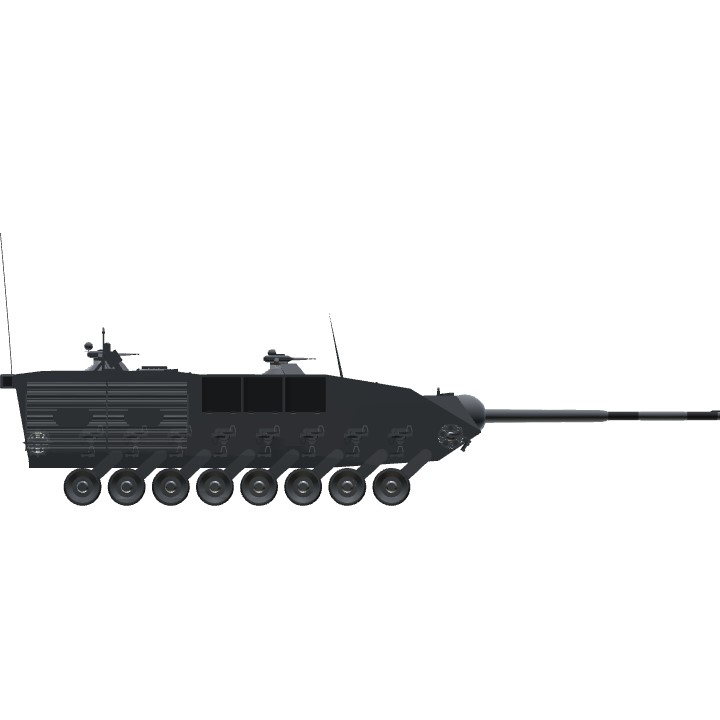 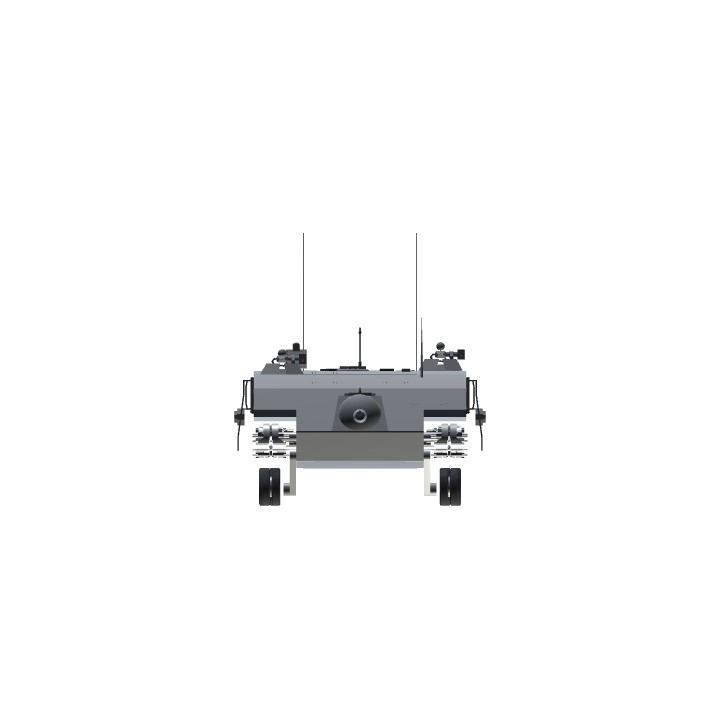