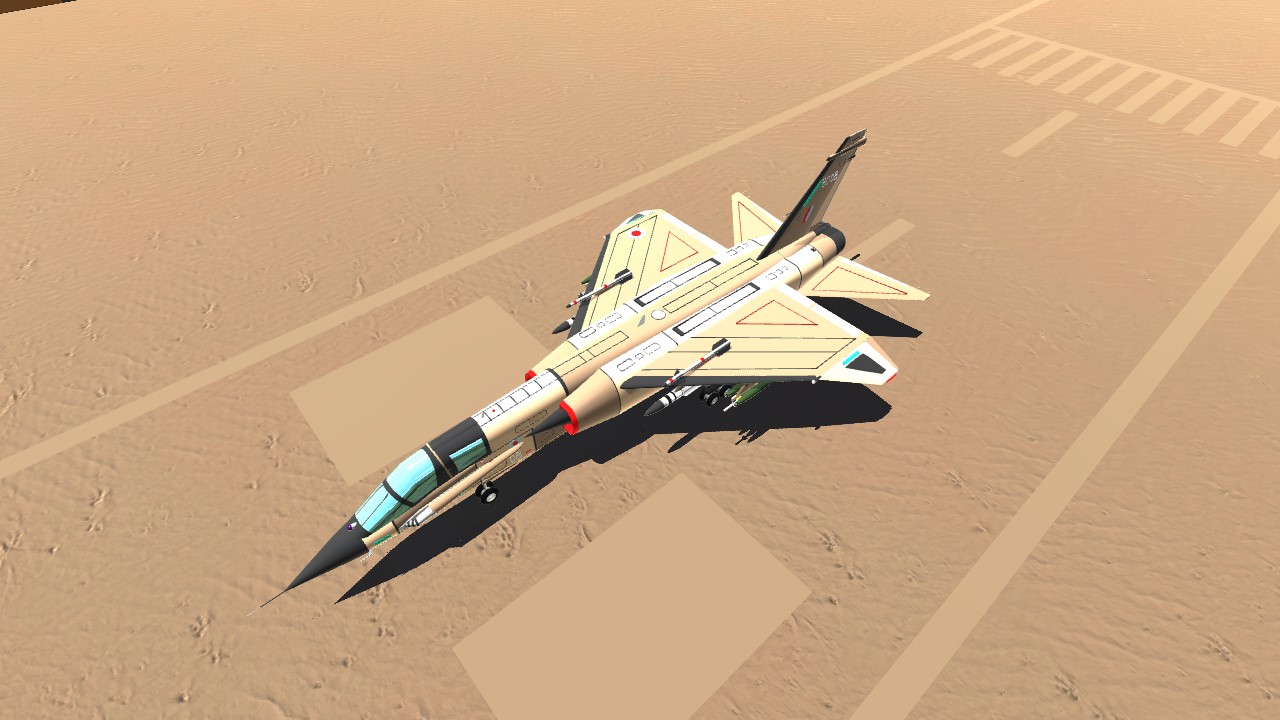 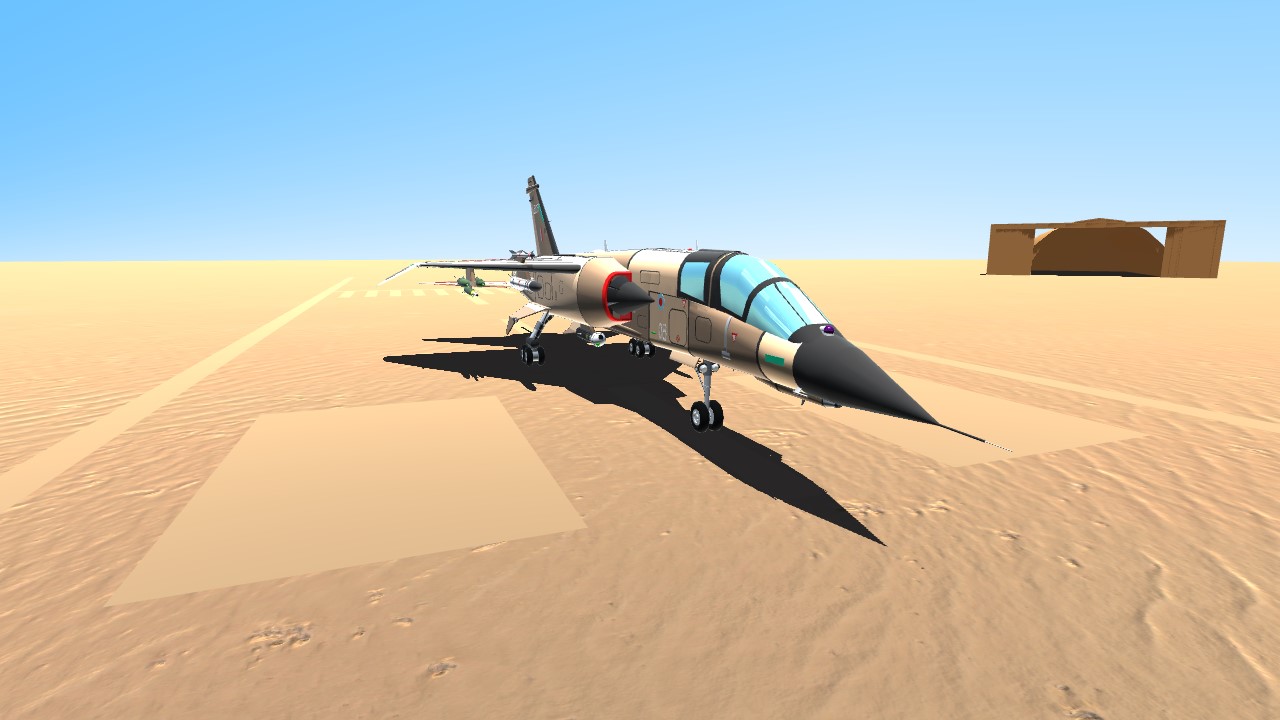 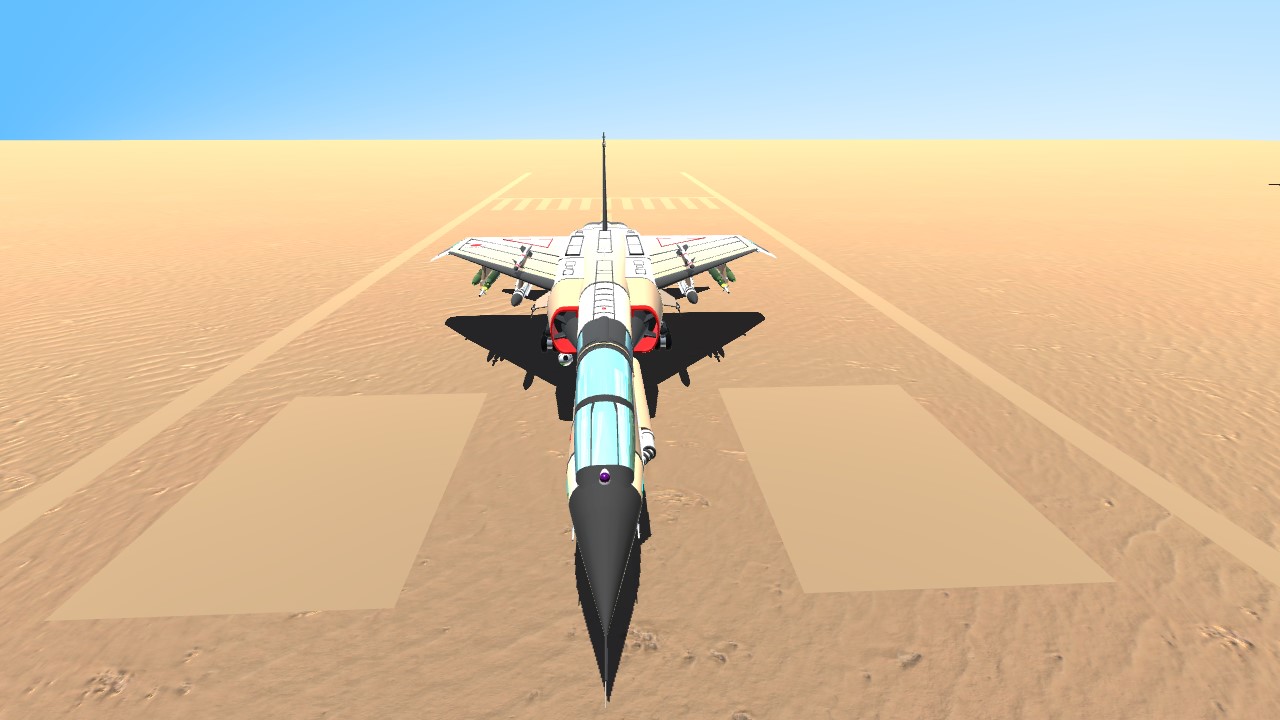 This is the Cyclone GR3-DS in RAF service. It has the RAF desert camo color scheme, RAF roundels and fin flash and it is equipped with 1 x StormShadow NG cruise missile, BlackOut MkIIIE Anti-radiation Missile, Free-fall Unguided bombs and ASRAAM AA-IR missiles for self-defense. This aircraft is designed to fulfill the tactical strike role.


Air-Refueling Procedure
-Recommended Altitude: 10.000-12.000ft (for safety reasons)
-Throttle: Retard at 5-6% (depends on weight)
-Airspeed: <270mph
-TRIM FULL DOWN
-AG3 Activate
-AUTO-PILOT ENCAGE
___
It is highly recommended to download and use the Units mod by mushr0om for Rate of Descent indication and other useful info during landing and/or flight.
___

Till the early 80s, RAF was using its V-bomber fleet for the strategic strike role –either nuclear or conventional. The term V-bomber was used for the Royal Air Force (RAF) aircraft during the 1950s and 1960s that composed the United Kingdom's strategic nuclear strike force known officially as the V-force or Bomber Command Main Force and included the Vickers Valiant, Avro Vulcan and Handley Page Victor. The V-Bomber force reached its peak in June 1964, with 50 Valiants, 70 Vulcans and 39 Victors in service.
During the 70s it became clear that Soviet surface-to-air missiles like the S-75 Dvina could successfully bring down high flying aircraft, the V bomber force changed to low-level attack methods, but this caused many problems with fatigue in the V-bomber wings. Additionally, standoff weapons were introduced and the tactical role passed to smaller aircraft like the SEPECAT Jaguar and Panavia Tornado.
The V-bombers were also capable of dropping conventional weapons and the Avro Vulcan is still well-remembered for its conventional Black Buck bombing raids during the 1982 Falklands War –although inadequate. The Valiants were used during the Suez Crisis as conventional bombers too. Usage of all V-bombers as weapons platforms, nuclear or conventional, ended in 1982.

RAF Strategic Command, seeing that the V-bomber fleet was approaching its service lifetime and was outdated, issued an urgent need for a new aircraft design that will be able to penetrate a well-defended forward battle area at low altitudes and very high speeds, and then attack high-value targets in the rear with nuclear or conventional weapons. Another intended combat role was to provide high-altitude, high-speed stand-off, signals intelligence (SIGINT) and aerial reconnaissance (RECCE).
Specifically, the requirement included:
- Delivery of tactical nuclear and/or conventional weapons at low level in all weathers, by day and night
- E/O-reconnaissance at medium and low level (day and night)
- Electronic reconnaissance in all weathers
- Delivery of tactical nuclear weapons day and night at medium altitudes using precision blind-bombing procedures if necessary
Low level was stated to be below 1,000 ft (300 m) with an expected attack speed at sea level of Mach 0.95. The operational range was to be at least 1,000 nmi (1,900 km) operating off runways of no more than 3,000 ft (900 m).
British Aerospace plc (BAe) proposed a revived design of the older TSR-2 aircraft deemed as XB.177 MkIIIA in order to fulfill the RAF strategic strike needs. This design was a relatively large twin-engine, twin-seated aircraft with delta wing and dihedral winglets and large delta tailplane. The propulsion system was incorporating 2 x Rolls-Royce Prometheus TF645 turbo-fan engines of 45.000lbf after-burner thrust each.
The TSR-2 was the victim of ever-rising costs and inter-service squabbling over Britain's future defence needs, which led to the controversial decision to scrap the programme in 1965. In early 1977, BAe presented a ground mock-up of the aircraft to RAF officials and was awarded a contract for 2 air-worthy prototypes by the end of 1980.
In March 1979, the first prototype was rolled-out from BAe factory facilities (XB177-1) and first test-flights were impressively successful. The XB.177 MkIIIA aircraft had a performance well above the standard requirements. It managed to fly at Mach 1.1 at sea level and it had a range of over 2.500nmi with internal fuel only. Upon the arrival of the second prototype (XB177-2), RAF commenced operational equipment and weapons test flights.
The XB.177 was capable of sustained cruise at Mach 2.5 at altitudes above 30.000 ft and had a dash speed of Mach 2.35. Its theoretical maximum speed was Mach 3.1 in level flight at 45.000 ft.
The aircraft featured some extremely sophisticated avionics for navigation and mission deliver, such as forward looking radar (FLR), side-looking radar for navigational fixing, an experimental IRST sensor and complicated ECM systems. These features allowed for an innovative autopilot system which, in turn, enabled long distance terrain-following sorties as crew workload and pilot input had been greatly reduced. Also, the design incorporated an internal weapons bay for supersonic carriage of missiles and over-the-wing pylons for AA missiles. The XB.177 has been equipped with a powerful Aden GC.133 40mm cannon for CAS missions and ground attack capability. A refueling boom has been added to the second prototype and air-refueling certification has been achieved by early 1980 in parallel with the conventional weapons carriage and firing certification.
In June 1980, the British Government decided to withdraw from front-line service all the V-bomber fleet and replace them with an initial order of 60 XB.177 fighter bombers, which received the Cyclone B.1 designation under RAF naming procedures. In 1982, the last V-bomber (Avro Vulcan) has been retired and initial deliveries of the Cyclone B.1 to RAF squadrons begun at late 1983. During the 1982 Falklands War, RAF has been heavily criticized for its inability to conduct long-range strike missions. So, UK government decided to order an extra 30 Cyclones of the tactical strike role (Cyclone GR1), adding more advanced equipment to the Cyclone and assigning it to more “conventional” strike roles other than nuclear –a role that has been transferred to Royal Navy submarine fleet. By August 1985, RAF acquired all the 80 Cyclones of the B.1 and GR1 variants and distributed them to RAF bases all across UK and overseas.
Months before the 1991 Gulf War, all the B.1 variants have been upgraded to GR.1 standard and participated in all Desert Storm related strike missions alongside US and French fighters. In 1993 a decision has been made to phase out the 30 older GR.1 variants and upgrade the total fleet to GR2 standard with more advanced avionics, newer nav/attack systems, secure com-links and incorporation of modern E/O-laser-GPS guided munitions. The operational debut for the GR2 variant was the British intervention to the Kosovo War in 1999 as part of the NATO operations during the Yugoslavian crisis.
The new Cyclone GR2 variant has been the RAF spearhead alongside Tornado and Jaguar in the British contribution to Afghanistan intervention at 2002 and Iraq war at 2003, under the US-led coalition. In order to retain the operational readiness of the fleet and add more sophisticated combat systems (especially ECM and jamming capabilities), RAF Strategic Command took under consideration all the post-conflict assessment reports and decided to upgrade 40 aircrafts to the GR3 “Decisive Strike-DS” standard and assign them to the tactical strike role. The modernization program contract, worth of £1.7bn, has been awarded to the BAE Systems – HARPIA DS consortium and was carried out in UK. The GR3 variant equipped the Cyclone with upgraded FADEC-monitored engines, Tactical Data Link interface, advanced ECM suite, new battle support systems and modern stand-off munitions. The modernization program completed at early 2007 and brought 40 Cyclones to the GR3 combat standard.
The typical load-out of the Cyclone GR3-DS includes:
-1 x StormShadow MkIING cruise missile, carried in the internal bay, capable of destroying ground or naval hardened targets up to 550km away.
-2 x BlackOut MkIIIE Anti-Radiation Missile, an upgraded version of the US-designed AGM-78 missile, intended for the SEAD/DEAD role.
-Multiple combinations of GBUs in Multiple Ejector Racks (MER) for heavy bombardment of a variety of targets.
-2 x ASRAAM AA/IIR Missiles with 360° lock-on capability, for self-defence.
-1 x StarLight Blk2 ATP - E/O and laser targeting pod for SIGINT/ELINT/RECCE missions. 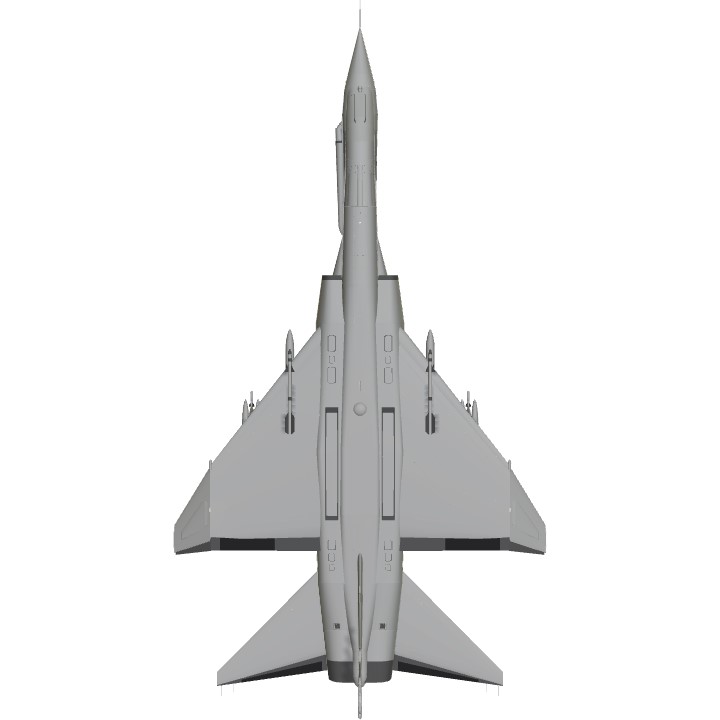 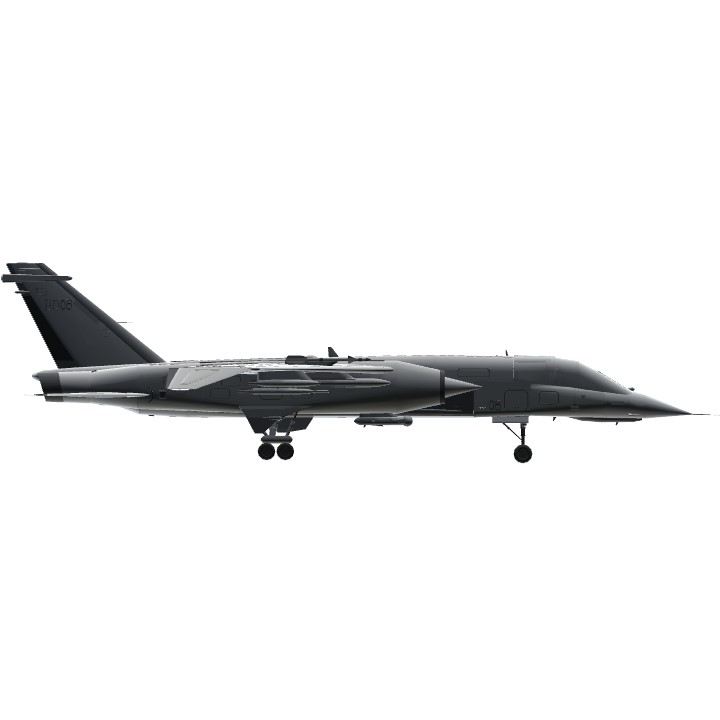 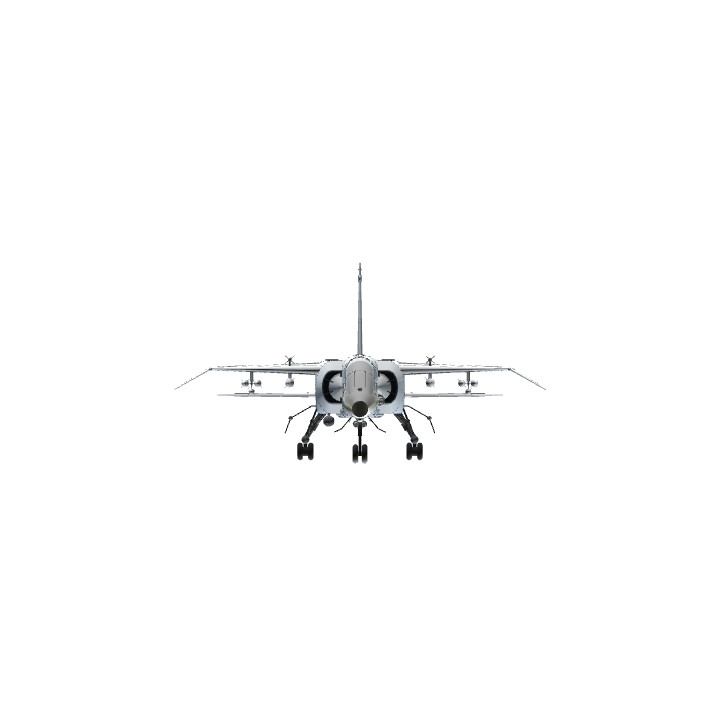