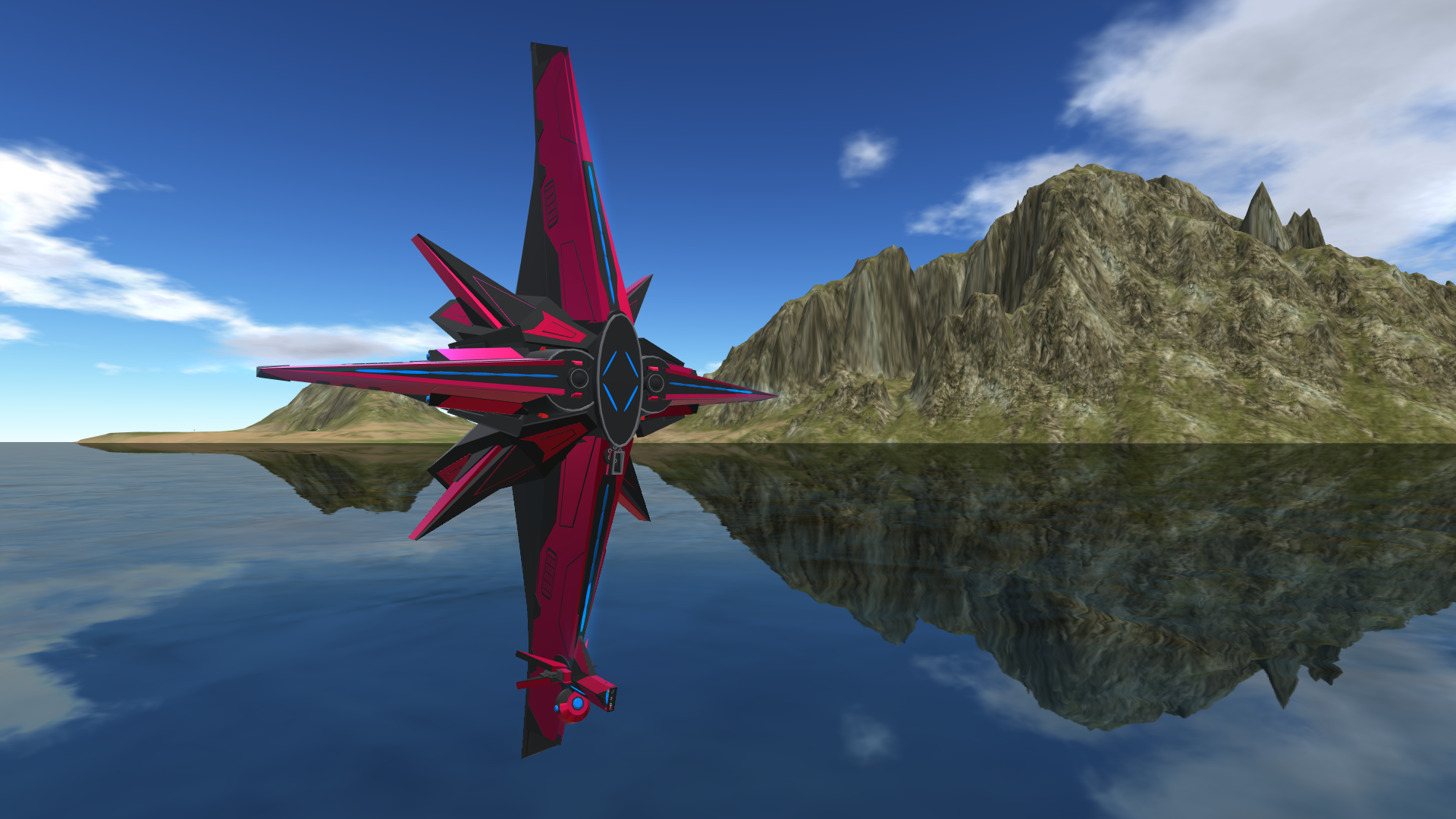 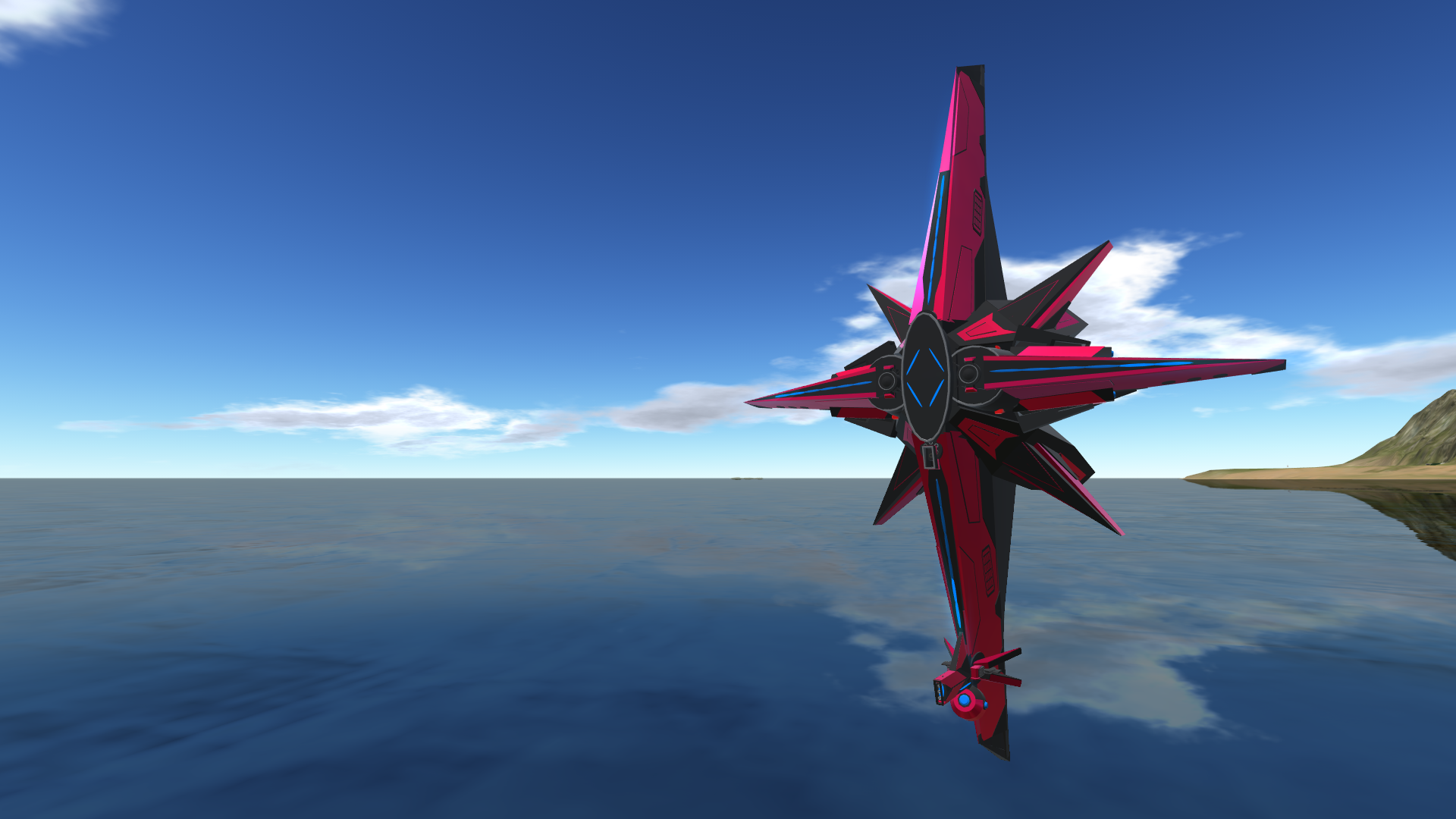 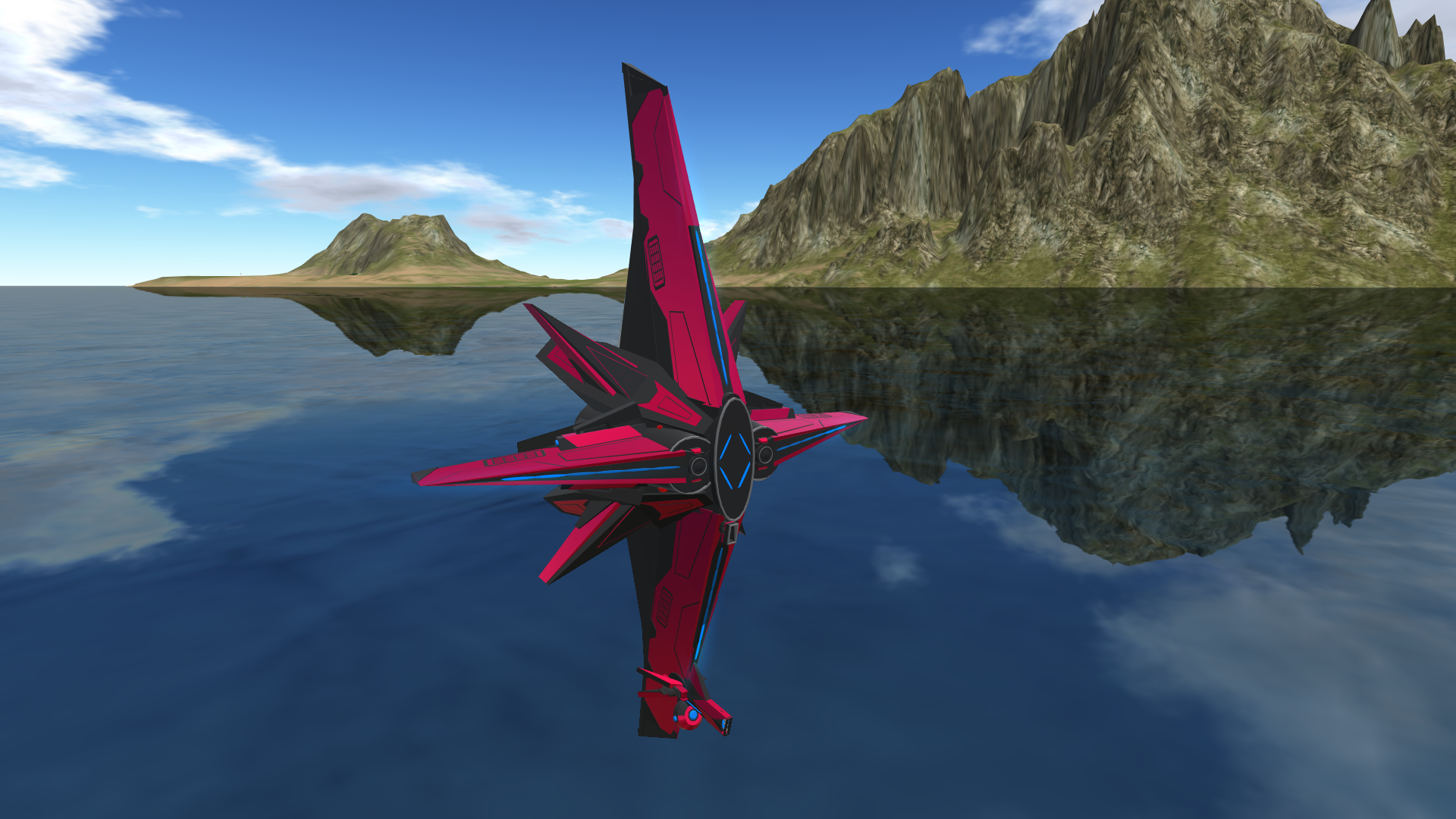 “It is time to embrace the Infinite Game.”

This aircraft is designed to hover a couple of feet above the ocean. Because of this unique mode of operation, I call it a SeaSkimmer. I absolutely loaded it with features (aesthetic or functional) that involved the use of funky trees!

Yes, I entered a floating starfish into the cannon competition. Sorry Bogdan! This one might be hard to grade performance-wise.

Pitch, Roll, and Yaw to move.

The VTOL bar can adjust your yaw power. This is extremely useful!
Sometimes the hovering system engages when you are moving fast, laterally, at an altitude above normal hovering altitude. This was not designed, but you can use it to pull some nice maneuvers.

This aircraft comes with a deceptively versatile armament. A high-yield energy gun, too, is added for your convenience.

This weapon is a derivative of the cannon part. Technically, it is multirole. To use it, select “Triple Lance KE-C” in your ATA or ATG menus.

IMPULSE PRIME
A staple of conventional air-to-air confrontation, this missile brute-forces its way through enemy countermeasures by instant lock re-establishment.

To use the weapon, select “IMPULSE PRIME” from your ATA menu, establish a lock, and fire. Note that there is a wide targeting angle, and that the max range is ~2mi.

Designed by SPEcorp’s ambitious PROJECT division, PROJECT: Empress serves as a reminder that the organization is still active, and technically excellent. The aircraft itself is known as a SeaSkimmer – it hovers above the ocean using a unique propulsion system. The star-shaped aircraft is unmanned, and it is operated remotely. A multitude of features have been added for the convenience of the operator in PROJECT: Empress’s event-controlled flight system architecture.

1.1 Mission Profile
The term, SeaSkimmer, is indicative of a vehicle that “skims” the top layer of a body of water. Aircraft that fit within this role demonstrate such behavior by hovering a few feet above the ocean. This quality is especially advantageous in fast-paced naval confrontation. PROJECT: Empress fulfills such a niche effectively as the PROJECT division’s debut SeaSkimmer design.

The advantages the SeaSkimmer are numerous. The aircraft do not come into contact with water, resulting in a significant drag reduction. Therefore, the SeaSkimmer can achieve high speeds without the use of the large engines integral to HVWC design. PROJECT: Empress itself achieves high speeds though the usage of a lightweight composite hull and an atrophied version of the Actus HVWC’s powerplant.

1.3 Defensive Competence
A selective, yet versatile armament is seamlessly integrated into PROJECT: Empress’s airframe. Two potent air-to-ground options, as well as a single air-to-air defensive system, have been provided. The standard loadout of the aircraft has been designed specifically for naval interception, and therefore provides versatility mainly in anti-ship confrontation. Figure 1.3.1 visually identifies these defensive systems: 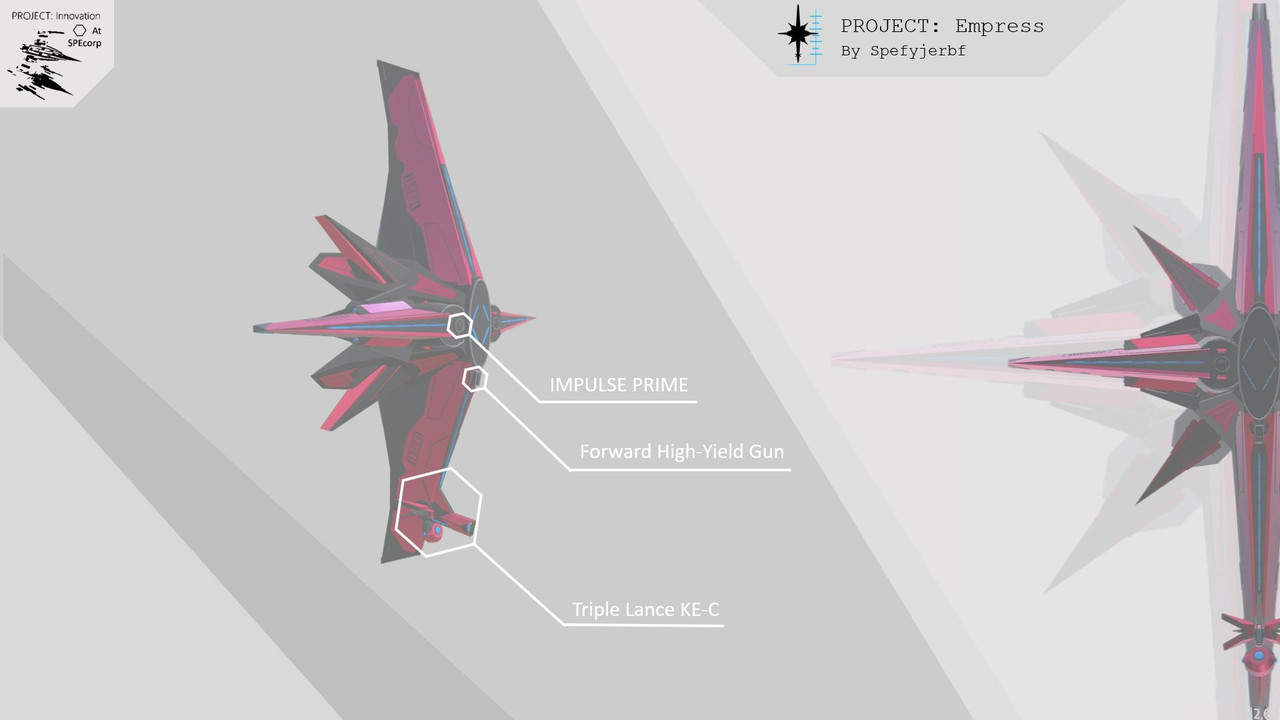 By most metrics, the aircraft’s cannon-based system, the Triple Lance KE-C, is PROJECT: Empress’s primary weapon. The system itself was designed specifically for anti-ship confrontation, as it does not rely on stored chemical energy (i.e. explosive shells) to maintain efficacy in a combat situation. Instead, the Triple Lance KE-C uses kinetic energy to neutralize a target. Extremely high projectile velocity is the sole contributor to the stopping power of the Triple Lance KE-C. SPEcorp nomenclature reflects this aspect of the system; the KE-C signifier designates the Triple Lance system as a Kinetic Energy Cannon.

IMPULSE PRIME modules, as well as a forward-mounted high-yield energy gun, were also added to the aircraft.

2.1 Propulsion and General Flight Characteristics
As previously stated, the SeaSkimmer category of aircraft hovers at a low altitude, above a body of water. To accomplish this, PROJECT: Empress uses a miniature version of the Actus HVWC’s engine, with directional thrusters responsible for axial control. Specifically, the aircraft’s thrusters are aligned with the vertical, longitudinal, and lateral axes of the aircraft. Such positioning is standard among SPEcorp VTOL flight systems, and is made possible by the industry’s high-capacity powerbanks.

The system’s features facilitate altitude control, horizontal velocity adjustment, and user-friendly yaw-axis control. Arguably, the system was derived from 2D AUTOTOL. Familiar logic, for example, was used to develop the system’s altitude control functionality. Comparative logic, velocity trigonometry, and additive “block” code were used to ensure that PROJECT: Empress controls altitude accordingly. In particular, the aircraft’s ventral thruster fires when a sufficiently low altitude is reached, as well as when an undesirably high downward velocity is attained. A “jump” term was added to the ventral thruster’s code, too, that enables vertical jump functionality. In this case, PROJECT: Empress accelerates rapidly until it reaches an altitude threshold. This acceleration, functionally, results in a jumping motion.

The greatest similarity between the two systems, though, is their identical horizontal velocity adjustment features. The SeaSkimmer flight system possesses a subsystem identical to 2D AUTOTOL, that automatically zeroes the vehicle’s horizontal velocity. Such a feature is extremely useful, as VTOL aircraft (specifically, in upright orientation) can be difficult to use in situations that require fine horizontal maneuvers.

Conversely, the system’s user-friendly yaw-axis control is a novel concept. This aspect of the system allows for the operator to adjust the vehicle’s yaw power mid-flight. To accomplish this, a VTOL-varying scaling factor was applied to the system’s yaw input. This factor therefore increases or decreases yaw power. With such a feature, PROJECT: Empress accomplishes user-friendliness without sacrificing performance – customizability lets the operator determine the sensitivity of their controls.

Thanks for reading and/or downloading! Special thanks to SPMC for giving me some moral support regarding my choice of the red/pink color scheme. 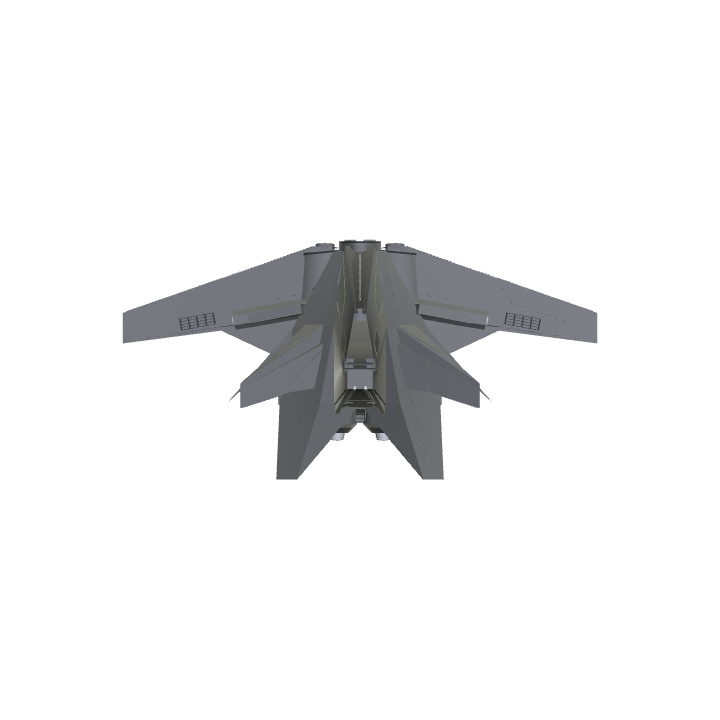 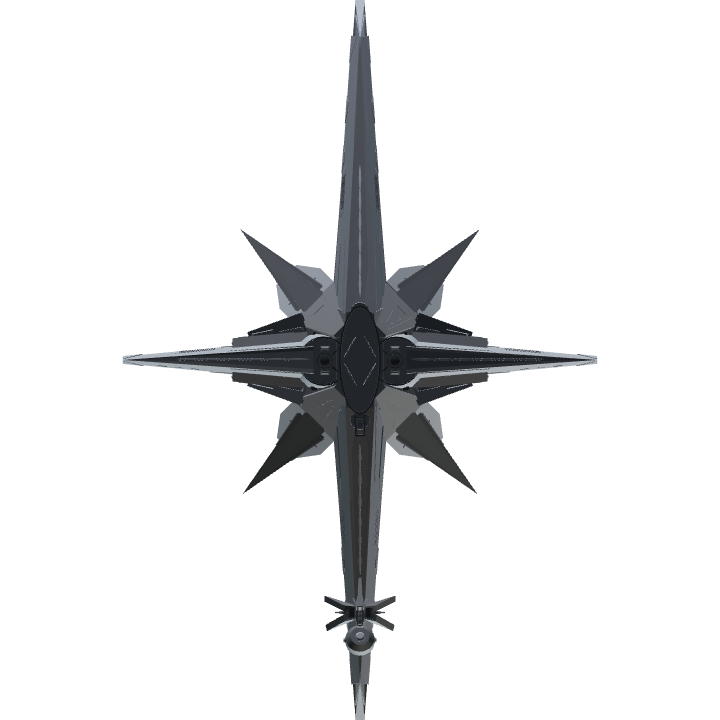