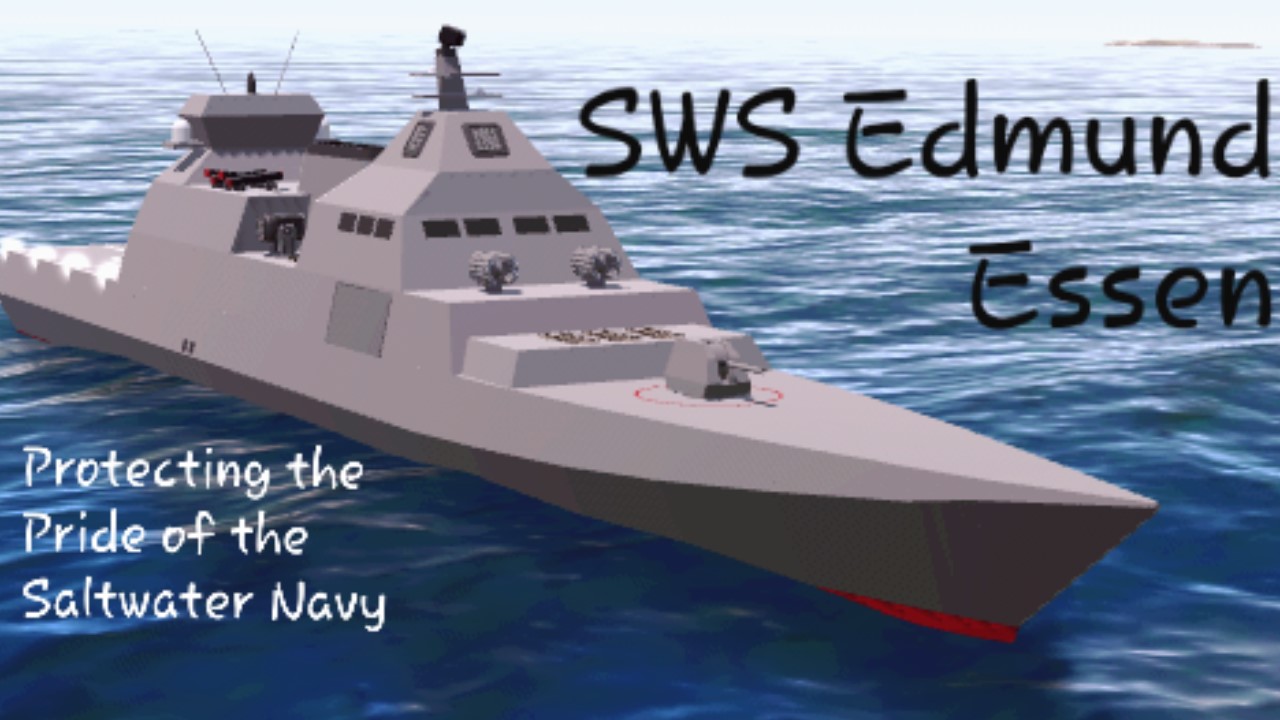 SWS Edmund Essen is the second ship in the Rift-class of anti-submarine warfare frigates. The Rift-class frigate was developed by SMC Marine to replace the Kamorta-class corvette, which had been deemed too slow and underarmed to effectively keep up with and defend the Naval Task Groups of the Saltwater Navy.

Development began after the results of naval exercises undertaken by the Saltwater Navy with the Republic of Halsenwal Navy became public. The results showed the the Kamorta-class corvettes, with their slow speed, had prevented the SWN battle group from bringing the majority of their weapons systems into range of the "enemy" forces. Travelling at a maximum speed of just 25 knots, and lacking advanced air defences, the corvettes were rendering the otherwise formidable Naval Task Groups impotent against more agile opponents.

To ensure the new ship could be developed quickly, the hull form of the Eden-class frigate was utilised, with the internal structure completely revised and redesigned. The frigate's superstructure features a range of stealth features, including sloped sides that lack external protrusions, and specially designed propellers that minimise noise. The funnel is designed to cool the air as it passes through, leading to a reduction in the ship's infra-red signature.

Development progressed rapidly, leading to a ship that could be adapted to a range of roles, and that boasted a particularly hard-hitting anti-submarine warfare armament. Two ships were sold to the South African Navy, and an order of twenty-five ships was placed by the Quarian Navy for a modified version. The Saltwater Navy ordered eight vessels to replace the Kamorta-class like-for-like.

Each ship cost $650 million from the beginning of construction to completion, taking an average of twenty months for each ship. SMC Marine was the primary contractor for each vessel.

The Rift-class was designed from the Eden-class, but features a much lighter and more streamlined superstructure, leading to a considerably lighter and faster ship. The warship carries a wide range of weapons system, with a twenty-four cell S-VLS positioned on the centre line forward of the superstructure. Just aft of the VLS are two RBU-6000 anti-submarine rocket launchers, each with 96 reloads in a below-deck magazine. Amidships are a pair RIM-178 Arrowhead point-defence missile launchers for use against incoming missiles and shells.

For defending against incoming aircraft and missiles sixteen S-VLS self-defence variant vertical launch cells are fitted just forward of the RIM-178 launchers. Also fitted is a 76mm naval gun for use against incoming aircraft and surface craft. The radar systems are taken from the preceding Merlin-class corvettes, with the EQ-STAR multipurpose radar capable of tracking fighter-sized targets out to 250 kilometres. The aft-mounted EQ-LARS surveillance radar has a range of 230km against similar targets.

The large fuel tanks in the spacious hull and cooled storage spaces four times larger mean that the ship can remain at sea for 50 days without replenishment, and has an unrefuelled range of 8,200 nautical miles at fifteen knots. The ship has a large flight deck capable of supporting medium-lift helicopters for anti-submarine warfare and transport duties. A single NH-90 Caiman or MAH-11SC Puma can be stored in a stern hanger.

The S-VLS is a vertical launch system developed by SMC Marine and is in service on the majority of Saltwater Navy warships as the fleet's standard missile launcher. The system is available in five variants, including a 3.9 metre Self-Defence Variant, a 4.9 metre Escort Variant and a 7 metre Strike Variant. The Rift-class is fitted with twenty-four of the Escort Variant, and sixteen of the Self-Defence Variant. The system is capable of launching Sea Ceptor surface to air missiles, VL-ASROC anti-submarine rockets and HSMM Block3 anti-ship missiles. A standard S-VLS weapons load for the Rift-class is sixteen Sea Ceptor, sixteen VL-ASROC and eight HSMM Block3.

The frigate routinely carries a crew of 108 officers and men, with berths for up to 134. Two seven metre sea boats are carried on davits either side of the hanger, and are lowered out of hatches in the ship's side. The frigate is equipped with bow thrusters for greater agility in confined waters, and has room on deck to allow for additional remote weapons stations. 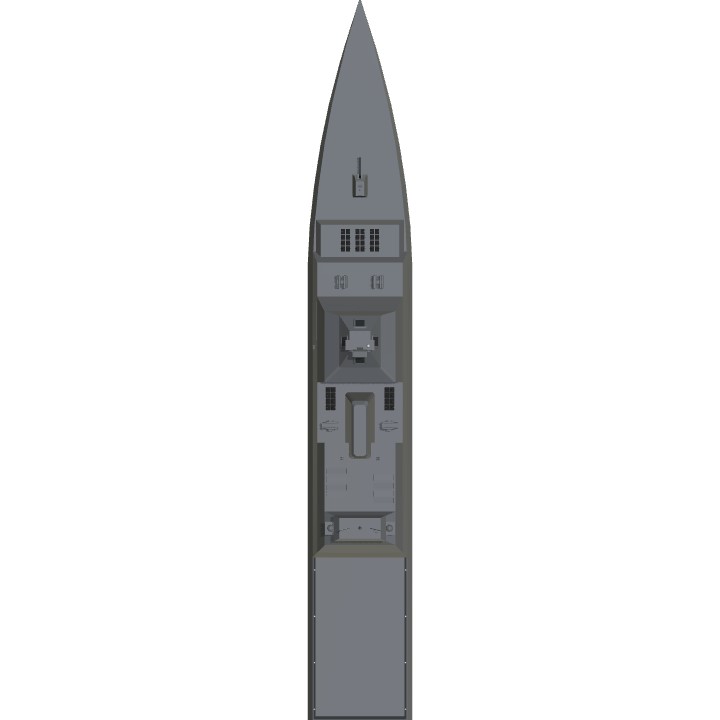 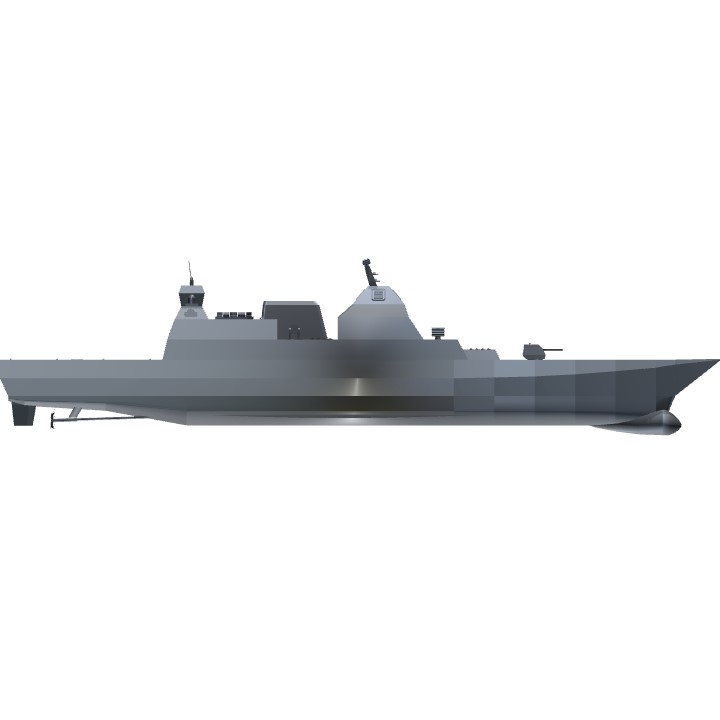 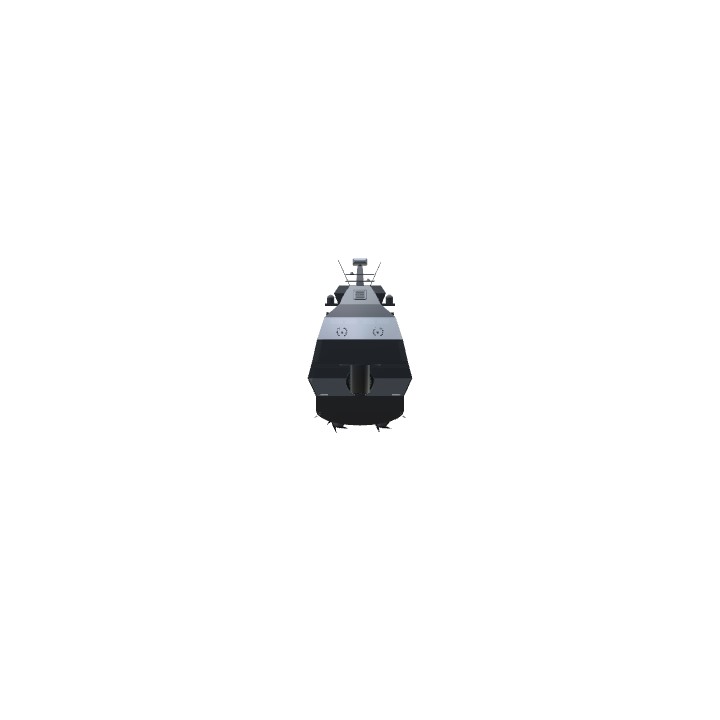