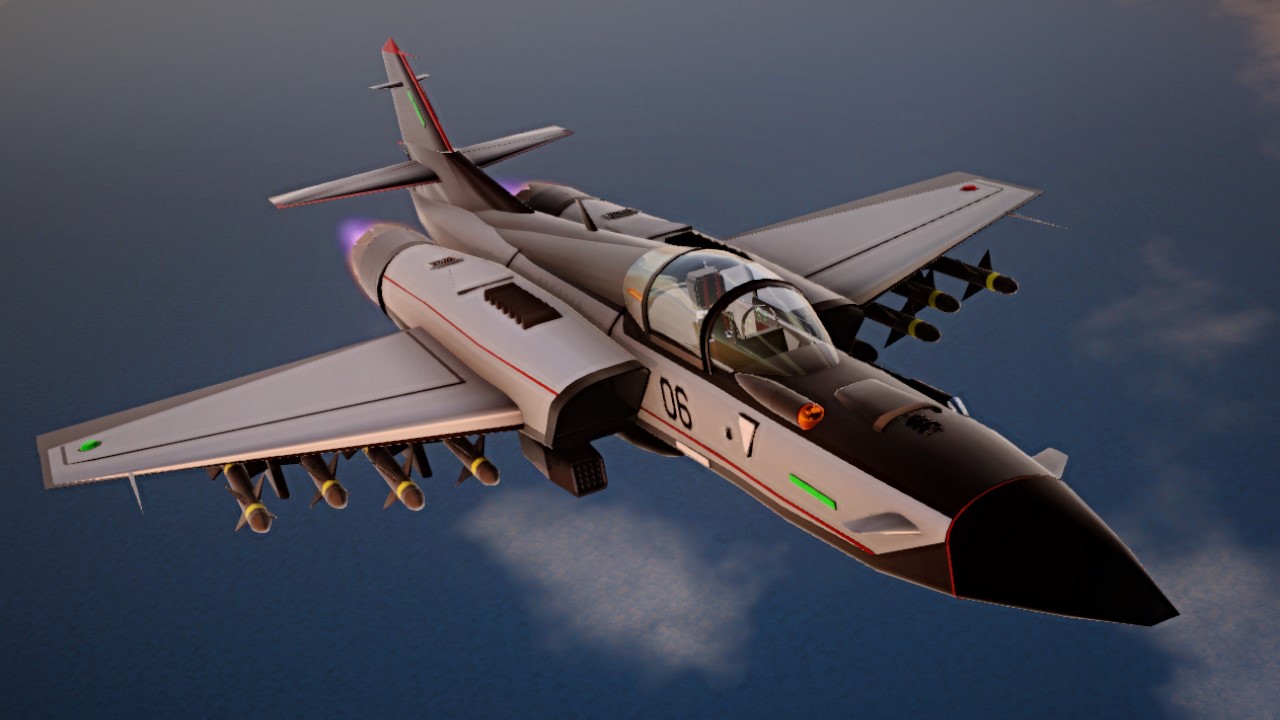 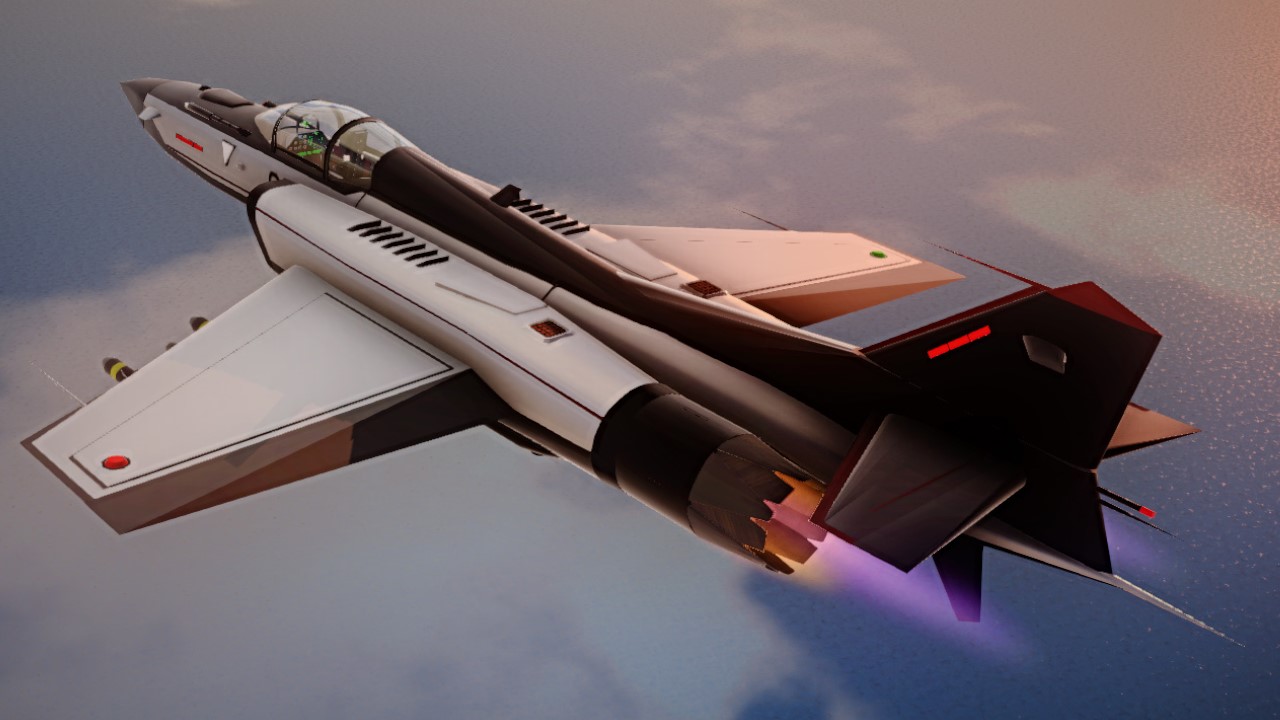 Take your wings and raise a storm.

This is not meant to be realistic-performing build.

This build isn't intended to fully support VR functionalities - But if you have a VR headset and want to try this, it should still be acceptable enough.

The Tanaxir Aeronautica Corporation F-6A Thunderstrike II is an early 4th-gen fighter jet developed in 1975 by TAC in response to increasingly frequent skirmishes near Velkirian territories.

The fighter jet is loved by the pilots and public alike, praised by it's relatively ingenious design, reliability, low upfront costs, manuverability, and operational flexibility. It soon became a Velkirian symbol of military aviation after first few engagements, as majority of young people began to hang posters of a rendition of an F-6A on their bedroom walls.

The aircraft had a high kill ratio of 1:18, racked up a total of 231 aerial kills, served a total of 46 engagements and 7 operations, and served the Velkirian Military Aviation Services (VMAS) from 1976 to 2005. At recent times, few F-6A units were brought back to the skies for experimental and military prototyping purposes.

All performance values below might not be accurate to actual gameplay performance. Especially the top speed.

All equipments besides armament is lore-only.

OneTwo - Helping me with AoA issues

Sadboye12- Helping me with aerodynamical issues and for feedback

Ouroboros for testing and feedback

And others that i forgot....

Dropping the tank will shift the CoM forwards, allowing for a more stable but less manuverable flight.

You might notice a very slight bit of autoroll in my plane. Since i finding the hidden mass that's causing the imbalance will take much time, i've instead added a tiny amount of dead weight to offset the imbalance. It shouldn't disturb your experience now.

The abnormally high TWR are needed to ensure the craft could reach high enough speeds at high altitudes. Don't worry, the drag at lower altitude will prevent the plane from going too fast at said altitudes.

The plane might get a bit bouncy on runways when you land or takeoff with afterburners.

I truly apologize if you find your experience with my build to be quite lacking. Please let me know if you find any issues in this build.

I started this project in 23 February. This took me around 12 days to make.

After this build, it's likely that i will take a break from simpleplanes until my school activies chill out a bit.

This is a lore plane to complement my beta roleplay universe. Want to join the roleplay? Here!

Many thanks to those who visited this post and gave it a go. If you like my works, feel free to leave an upvote! 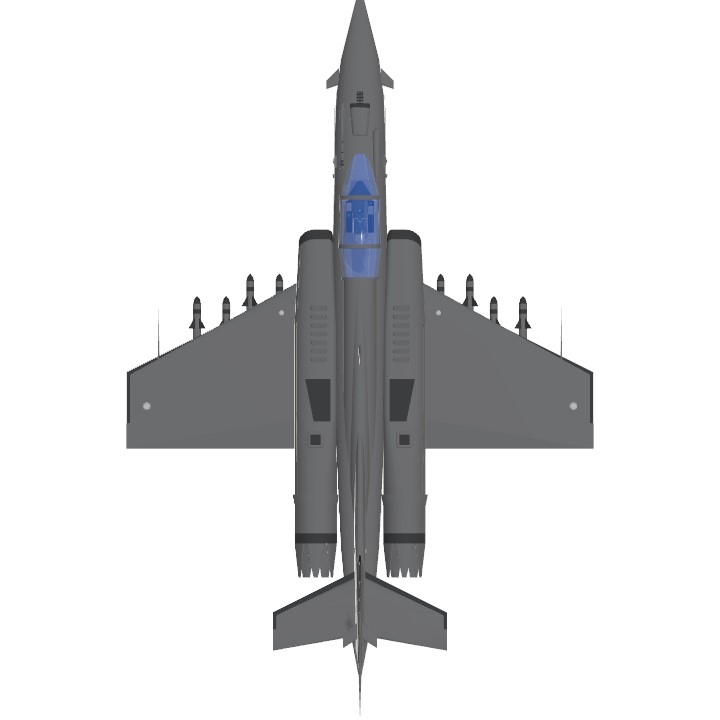 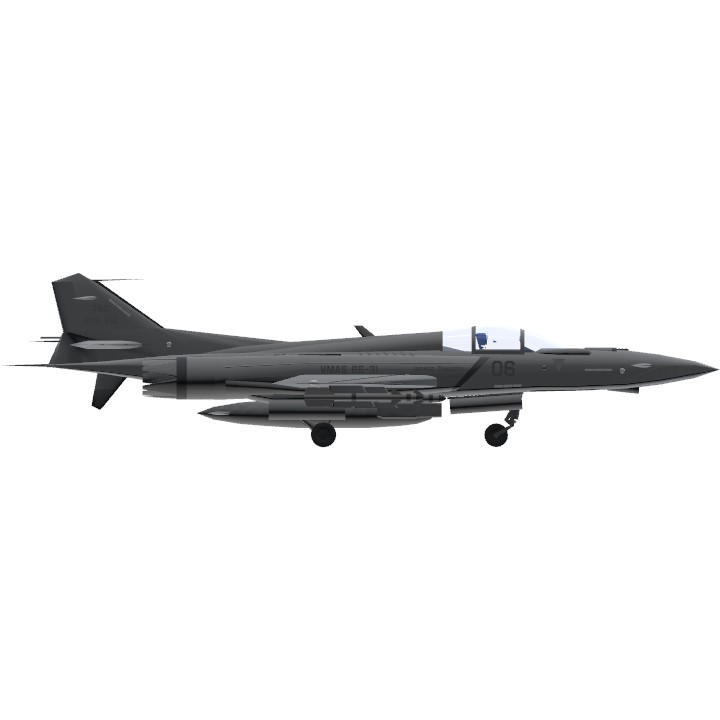 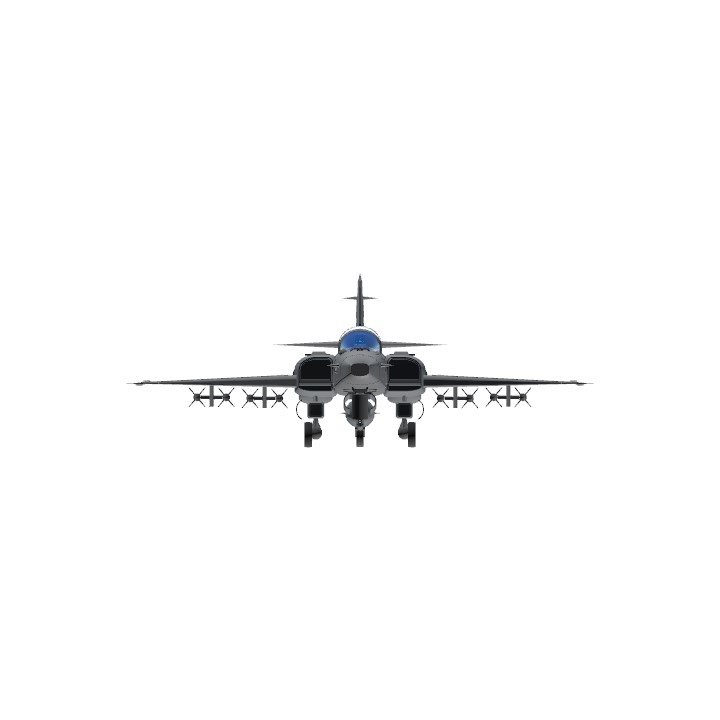