With that being said, however...

I seem to have a thing for making absolutely massive flying wings. First it was the XFWB, then it was the XFWAC, after that I made the TR-6 TELOS, and now, I’ve made the Lockheed Martin CL-1201, an absolutely insane proposed aircraft design conceived during the late 1960’s, that supposedly, would’ve weighed nearly 12 Million lbs, was powered by a Nuclear Reactor that produced 1.83 Gigawatts of energy, could take off vertically using 182 Boeing 747 engines, could carry 22 F4 Phantoms, and the tip speed of the blades on the four main jet engines, all of which are wider than the Boeing 747‘s fuselage in diameter, would be hypersonic, which is absolutely mind blowing.

Even for today’s engineering capabilities, a project like this would require an unfathomable amount of time and resources, let alone the insane amount of engineering feats in order to get it to work. A modern version would probably carry F-22’s or some other 4th-5th Gen Fighter, and it may have different engines, but still! For 1960-1970, something of this magnitude was absolutely impossible with the current resources and time at hand, and even if possible, the question of if it would even be useful in warfare, or if it would even work for that matter, still lies unanswered. 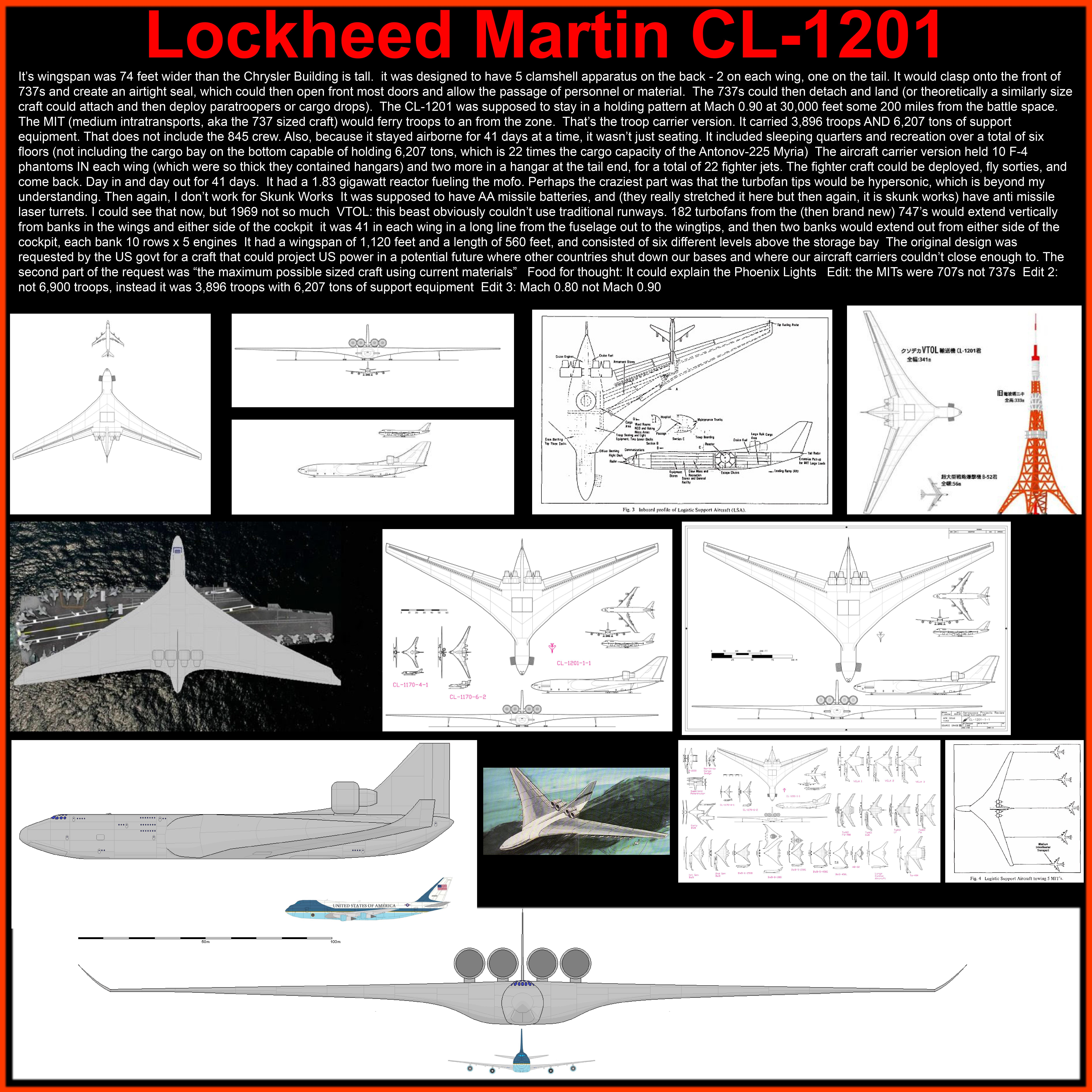 By sheer coincidence, the user @Notaleopard started making a replica of the same aircraft I was working on, the CL-1201 Flying Aircraft Carrier. So you may have already seen his rendition of the craft, so here’s mine!

Part 1: Takeoff Procedure
Like I mentioned earlier, this entire thing is a VTOL craft. As insane as it sounds, it can actually lift off the ground vertically! I have my doubts that it would be capable of this task IRL, but it can certainly be accomplished in SP! To takeoff vertically, simply Throttle Up to 100%, and it should lift off very slowly. Do note that, this thing has nearly 100 “Blasto J-15” engines on it, and is incredibly loud at full RPM!! I’ve gotten audio glitches happen as a result of this thing, so if your device is old and suffers from audio glitches a lot, I recommend you turn your volume down before VTOL’ing with this thing. Continuing, once you’re in the air a significant altitude, preferably atleast a few hundred ft. above takeoff location, slowly move the VTOL Slider up to ignite the main engines. These massive engines would’ve easily been the strongest jet engines ever made in history, had the CL-1201 been built. As you increase power on the main engines, you’ll notice that the aircraft starts to dip downwards a bit. To counteract this, use the TRIM Slider accordingly. Once you’ve leveled out, and you’re at max input for the VTOL Slider, Throttle Down to 0%, to completely shut off the VTOL Engines. Once you’ve done this, congratulate yourself! You’ve just successfully taken off with the world’s largest concept aircraft.

Part 2: Main Flight Controls
You’re in the air, flying the CL-1201. You’ll notice that, as I mentioned earlier, just like with all of my other massive flying wings, it is completely gyro controlled, in order to prevent the pilot from pulling absolutely ridiculous maneuvers. You have limited pitch controls, and limited roll controls. Yaw and Roll combined are your main method of turning the aircraft. Do note that, if you use too much yaw, or counteract your yaw to straighten your flightpath too late, it will overturn strongly, and you’ll end up flying somewhere you probably weren't trying to go. So go easy on the controls, and treat the aircraft like it is, a massive flying aircraft carrier. By this, I mean to focus on it’s weight, and how this weight translates in a turn. It’s a lot of weight, moving in one direction. For it to suddenly move a completely different direction, would require a shit ton of force! So don’t try to turn too hard with this thing, it may not end well.

Part 3: Landing Procedures
Landing this thing is, surprisingly, a lot easier than one would imagine. To land, simply set yourself up for the final approach, and Throttle Down to almost middle section. (the VTOL Slider, not Throttle.) Once you’re nearing the landing site, may it be an Airport, a landing strip, or just some area deemed safe enough to land at, Throttle up to 90%. Your airspeed should decrease quickly, and eventually, you should begin to stall out over the landing area. This is normal, and to be expected. Your VTOL Engines should slow your descent, so there’s not too much to worry about. Once you’re roughly 100ft. above the landing site, throttle up to 95-100%, depending on how fast you’re descending. Extend landing gear. From here, once your a short distance above landing site, and your gear are extended, it’s really up to your own judgement in order to land this thing. You can either just let it hit the ground, as the landing gear are certainly beefy enough to take a hell of an impact, but it is not recommended. Or, you can set it down gently with the soft grace of an angel. Either works, but one is typically more preferred. Regardless, congratulations! You have just landed.

If the CL-1201 has actually been built, it would’ve carried a significant arsenal with it; 22 F4 Phantoms, 10 on each wing, and 2 stored in internal hangars. They would hang from the wings from pylons, much like a missile would on the wings of a fighter aircraft. They could be fired off, and supposedly, dock back onto said pylons when done with their mission. As much as I would’ve loved to include this feature, it simply isn’t possible for the current state of SP to pull off. Another thing to note is that each F4 Phantom is almost 50 parts, which isn’t a lot, but multiply that by 22, and you get roughly 1,100 parts of F4 Phantom. This would be waaay too much for my phone to handle, I’m afraid to say. Maybe if you used some absolutely insane levels of FunkyTrees code, a whole lotta coffee, and I got a much more powerful device, it might be possible, but I have my doubts. So instead, I went for the next best thing to do; turn the shell of an F4 Phantom into a custom missile with a big explosionScale value, and use it as a hilarious kamikaze weapon. Basically, the F4 Phantoms are just really weird looking Guardian Missiles. I used Guardians because they can re-establish a lock if an enemy uses countermeasures, so they’re very hard to shake off if you’re locked onto by them. If you don’t want to fly with them, use AG-1 and they detach from the pylons.

Structural Notes:
So as one would expect, I used actual blueprints and reference images of the CL-1201 in order to make it as accurate as possible. However, there’s several problems that I encountered with doing this; None of the blueprints I could find wanted to agree with each other. When I say this, I mean that there was a lot of variety in terms of structural design between blueprints. Some blueprints sported the winglets used to decrease wingtip vortices, some didn’t. Others suggested a larger engine size than others, and some blueprints even neglected the canards at the front. So as I usually do when blueprints collide and don’t match, I take the coolest feature from each blueprint, and create an amalgamation of an aircraft that includes the preferred features of each blueprint. To specify, this “replica” here (I put replica in quotes because this is an anything but accurate representation) features the Canards from most blueprints, the Winglets of some blueprints, the engine size and spacing of the majority of blueprints, and the cockpit design of another set of blueprints. I notice that on a lot of blueprints, the dominant cockpit design is the one seen on Notaleopard’s replica, which by the way, if you’re reading this: awesome use of negative opacity glass for the cockpit, I love how it glows like that! But I decided to use the other cockpit design, because it would be more unique in this context, and I just like the idea of an equally massive cockpit on an already immense aircraft. Like an entire auditorium sized room, dedicated to and designed to control the behemoth. Like the NASA Nerve Center that all the rocket scientists were in when they were guiding in the Moon Lander. Something like that, I guess.

Extra Note:
One more thing I’ll note about the F4 Phantoms, is that I didn’t make them; Somebody else made these low part-count F4 Phantoms, and I really wanted to ask them for permission to use them, and credit them in the desc. here, but unfortunately, I cannot find the user who made them. In fact, I even posted one of them unlisted, just so I could see the original poster via the successor system. But there were no successors to the F4 Phantom, which would imply that the original poster no longer exists, or they deleted the post. So if by any chance, anyone recognizes the F4 Phantom used here, and they know who the original poster is/was, please tell me! I want to credit them for their amazing job at making such a good looking low-part Phantom, which worked perfectly for this build.

Anyway, this description is disgustingly long, and if you’ve read it completely until here, I congratulate you! You’re dedicated, really.

So with that being said, Have Fun! 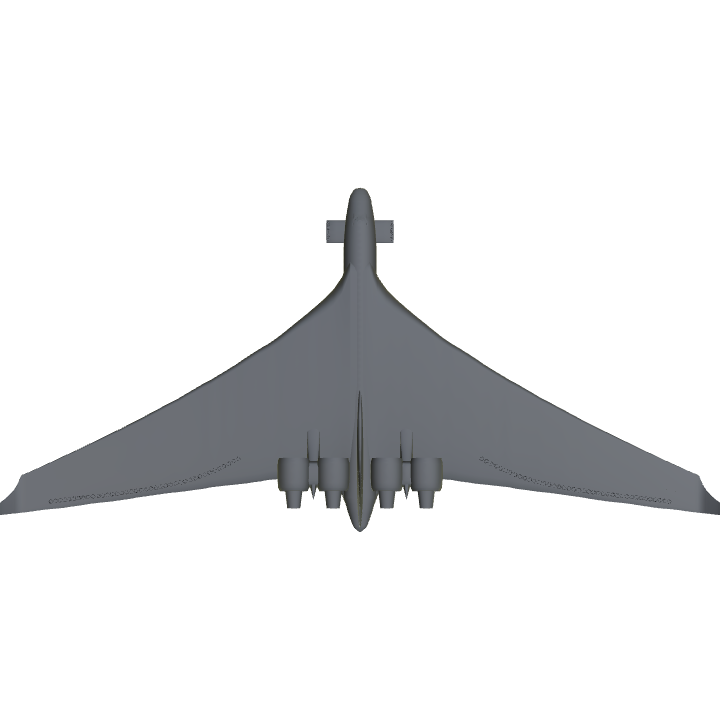 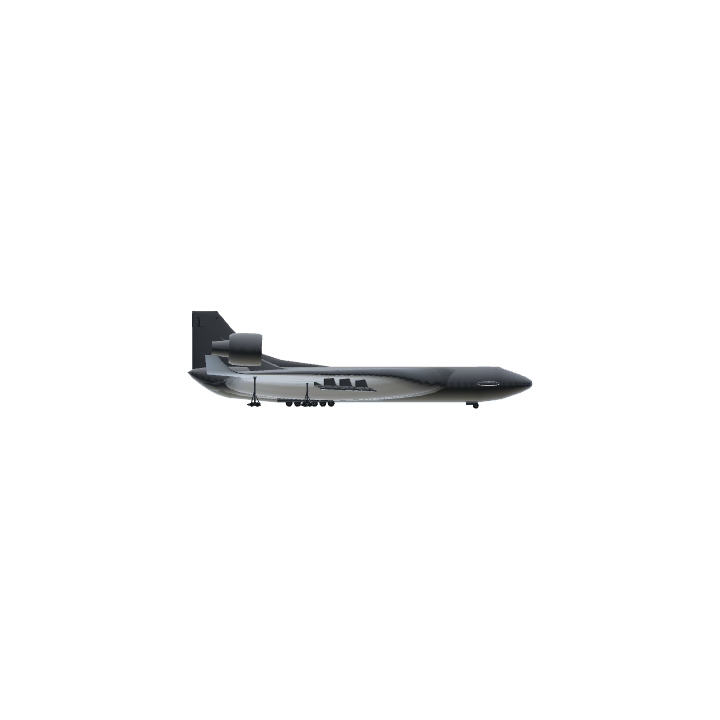 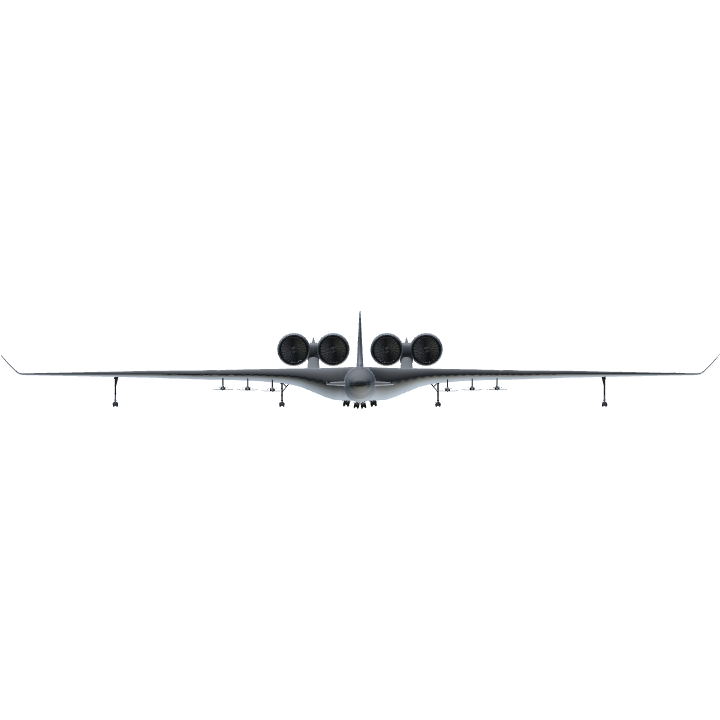