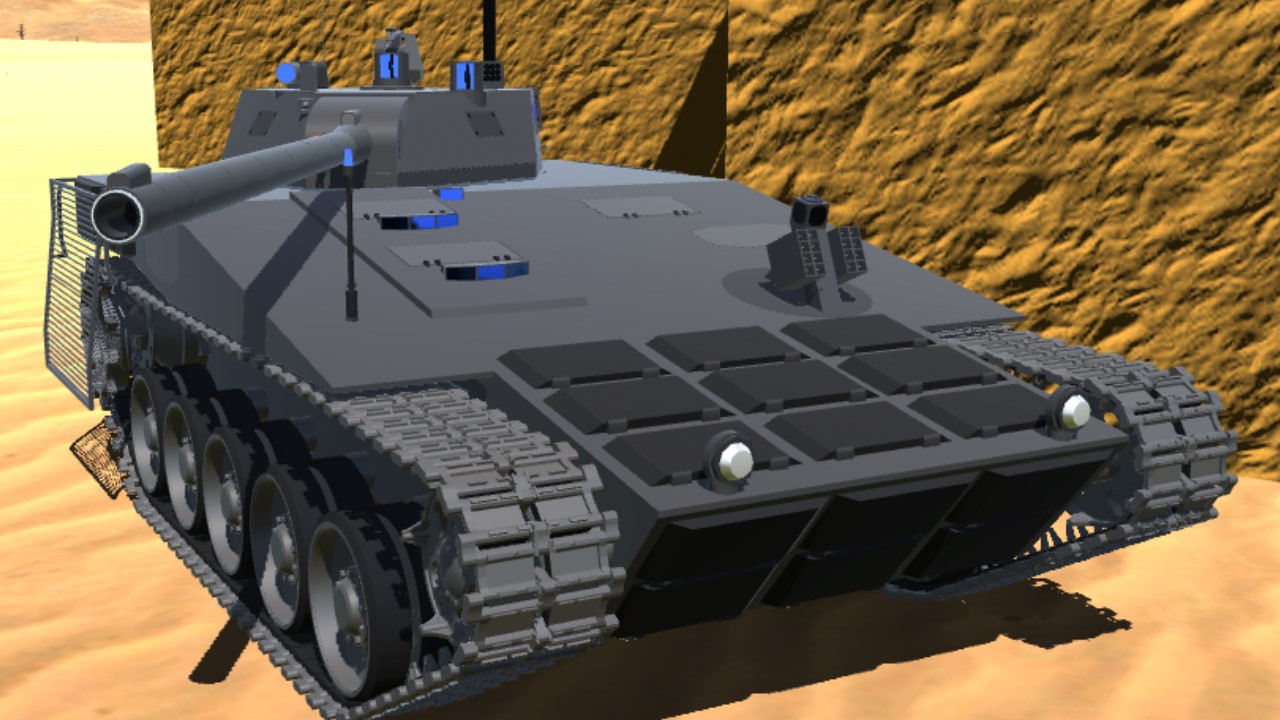 Collaboration build by MrVaultech and Typhoon

The ST-110 'Albacore' A1A is a next-generation main battle tank developed for the Saltwater Marine Corps, designed to operate as a light, highly mobile asset which retains good firepower and protection.

Produced by Typhoon and MrVaultech.

The Albacore is a radical design developed by a consortium of Rheinmetall OST, SMC Ground Forces and DL Defence, leveraging technology from the equally revolutionary Dominion tank destroyer. The vehicle is fitted with a crew of three, with the gunner and driver in the hull and the commander in the turret. The engine is mounted forward, on the left side of the tank. To compensate for the forward weight, the turret was positioned to the rear of the tank, and contains the majority of the weapons systems, including the lightweight RH-128-A8A1 smoothbore cannon.

The ST-110 Albacore A1A offers a high level of protection to the crew, with 820mm of spaced ceramic armour on the frontal plane. In addition to this, the engine serves as additional protection for the crew from port-side armour penetration. The side and rear armour is weaker, but still capable of protecting against medium calibre anti-tank rounds. This armour is usually complemented by ERA and slat armour in the combat zone.
The standard weight of the Albacore is 42 tons, although this can increase to 46 tons at combat weight.

The ST-110 Albacore A1A began as the Next-Generation Armoured Warfare project, which was to develop a replacement for the aging M1A2D Abrams then in service. A consortium of Rheinmetall OST, SMC Ground Forces and DL Defence worked on designing a prototype over the course of the next six years. The hull was completed first and was trialed by Marine Corps without its turret. These trials showed that the vehicle was highly mobile and possessed good agility, even over rough terrain.

Development of the turret, manufactured by the inexperienced DL Defence, was slower and more problematic, resulting in the development being taken over by SMC Ground Forces. Under the new management the project progressed at a much faster rate, and within eighteen months the completed vehicle was undergoing acceptance trials, with it progressed through rapidly.
The Saltwater Marine Corps ordered an initial batch of fifty vehicles, followed by two further orders for 120 and 150 vehicles respectively, replacing the 150 M1A2D Abrams then in service and expanding the armoured forces by three regiments. Each tank has a complete cost of $6.1 million.
On the export market, sixteen examples were sold to the Republic of Avalon and eighty to the Ukraine Republic. These tanks, designated E1A, lack the advanced Midnight-1 active protection system and some Saltwater-specific equipment.

The turret for the ST-110 Albacore A1A is relatively small compared to contemporary designs. This is because it is only required to accommodate a single crew member, compared to two or three in other vehicles. Designed by DL Defence, the turret houses the majority of the weapons systems, including the RH-128-A8A1 smoothbore cannon, which is 128mm in calibre. Developed from the Dominon's RH-128-A7A1 the A8 lacks the ETC system in order to save space and weight. In addition to this, the breech was modified to allow for higher angles of elevation and depression. The cannon uses an autoloader, permitting sustained rates of fire of up to twelve rounds per minute. Thirty-eight rounds are provided in blow-out compartments.

On the right-side of the RH-128-A8A1 is a 12.7mm heavy machine gun in a coaxial position. The weapon is operated by the gunner, positioned below in the hull, and can be used against infantry and soft targets. On the turret roof is a 7.62mm machine gun mounted in an RCWS. The RCWS is operated by the commander of the tank, and both machine guns are able to be cued by the onboard radar for limited air defence purposes. Finally, there is a launcher for the Sledgehammer-ER anti-tank guided missile on the right-hand side of the turret, with each missile taking the place of a shell in the ammunition storage space.
Each missile is capable of hitting a moving target at a range of five miles thanks to its infra-red seeker, and can penetrate through reactive armour due to the tandem charge warhead.

Various types of ammunition can be carried in blow-out ammunition compartments, including high explosive, and APFSDS shells. Proximity-detonating anti-aircraft shells can also be fired to guard against air attack. In the future laser and GPS-guided shells are planned for introduction.
The commander is seated on the right side of the turret, and accesses his position through the gunner's hatch in the hull just forward of the turret. For emergency escape, there is a sliding escape hatch directly above his position. This hatch can also opened to obtain a superior view of the surrounding terrain, although with the Albacore's multitude of optical systems this option is considerably less important than on preceding third-generation MBTs. Two further hatches are positioned on the left and centre of the turret, and are used by maintenance crew to reach the autoloading mechanism and gun breech.

The engine compartment is situated in the front of the vehicle on the left-side. It houses a 1,300 horsepower diesel engine, with the air inlet left of this. At standard weight this gives the Albacore a power-to-weight ratio of 28 hp per ton, propelling the vehicle to a maximum speed of 48 mph. The compartment is protected on all sides by Kevlar splinter protection. All internal fuel tanks are coated in self-sealing rubber to prevent leakage after combat damage.

Unusually for a main battle tank, the ST-110 Albacore has three exhaust ducts. Mounted at the extreme rear of the tank, each exhaust contains a thermal suppression system to reduce the infra-red signature of the tank.

The crew compartment contains two crew members and their equipment. The driver has the forward position, with control over the power plant and transmission. Behind him, the gunner controls the 128mm main cannon and the coaxial 12.7mm machine gun. Both the crew compartment and turret maintain constant overpressure to guard against radiation. The vehicle is capable of operating safely in NBC conditions, partly thanks to a particle extraction system, which gradually expels air out of the tank via a roof outlet and replaces it with clean air filtered by a second inlet.

As with the engine compartment, the entire crew compartment is lined with Kevlar splinter protection. Per the standards of the Saltwater Marine Corps, the compartment also contains rations, water and equipment to be self-sufficient for up to ten days.
Each crew station is provided with the controls for any one crew member to control the tank to a limited degree in the event of an emergency where the driver is killed or incapacitated. Furthermore, both the gunner and the commander in the turret can operate the main armament and machine guns.
All crew positions in the vehicle are equipped with multipurpose digital displays as well as their analogue back-ups.

Various pieces of equipment were added to to the exterior of the vehicle to assist the passive defensive equipment inside the vehicle.
For defence against ATGMs, RPGs and certain anti-tank shells, the  Midnight-1 hard-kill APS, with AESA radar inserts around the vehicle, can strike targets at ranges of up to 1.5 miles, although standard engagement range is more like 50 metres and minimum range two metres. Sixteen individual missiles are carried in a rotating launcher, and these are able to be reloaded in the field.
Soft-kill systems are also fitted. These include a radar jamming system, smoke grenades, chaff dispensers and IR flares. These systems are operated by the commander in the turret, but the gunner can also operate them.

The ST-110 Albacore A1A is designed for high mobility, allowing the vehicle to quickly reposition after engagements with enemy armour. The tank has a relatively low profile, of just 2.04 metres from the ground to the turret roof, minimising the chances of being visually located by the enemy. In an offensive war, groups of four Albacore A1As and two Dominion A2Bs will advance together, with the Dominons engaging targets at longer ranges with their ETC main cannons and the Albacores dealing with closer targets and scenarios where the larger Dominions are unable to reposition to engage themselves.
Up to two ST-110 Albacore A1As can be airlifted by a single A400M Atlas transport aircraft, enabling rapid deployment to the war zone. Two Albacores are able to fit in the space taken up by one Dominion, due to the rear-mounted turret and relatively short hull. This means that large numbers of ST-110s can be carried in amphibious assault ships, giving landing forces effective fire support from the first wave during an amphibious assault.

The ST-110 Albacore was designed from the outset to maximise crew protection, especially from frontal assaults. The forward armour consists of 820mm spaced composite armour, with NERA inserts and ERA add-ons. Behind this is a layer of Kevlar splinter protection. The side of the vehicle is protected by a single 250mm composite armoured layer and ERA plates, with bar cage armour around the rear of the tank to protect against RPGs. The rear of the tank is armoured with 65mm of composite and the tank roof has 125mm, with further ERA plating.
Armour upgrade packages are currently under development by SMC Ground Forces, to be introduced within eighteen months of delivery of the Albacores themselves. 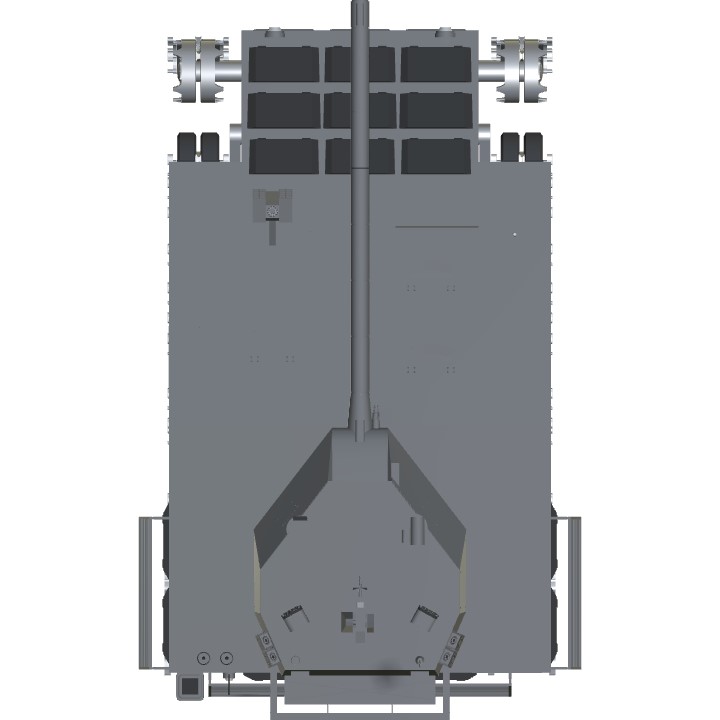 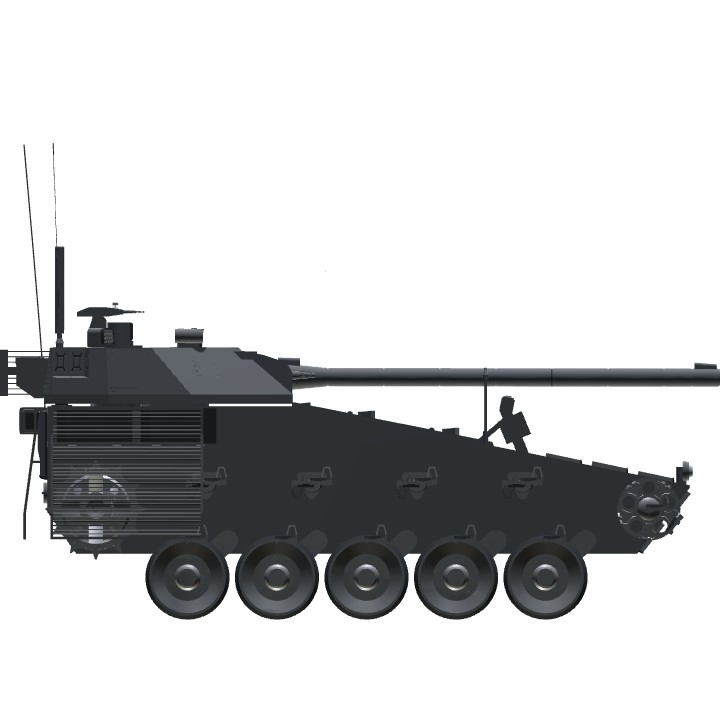 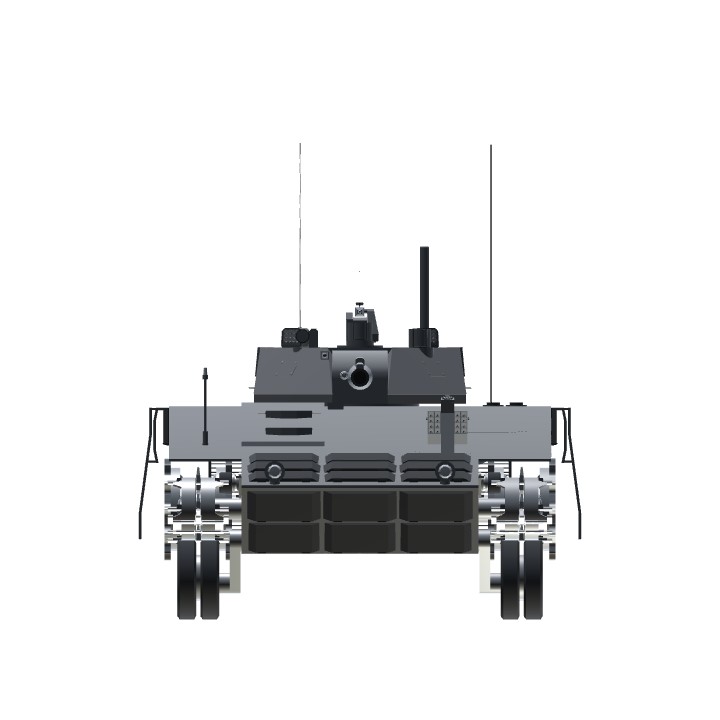