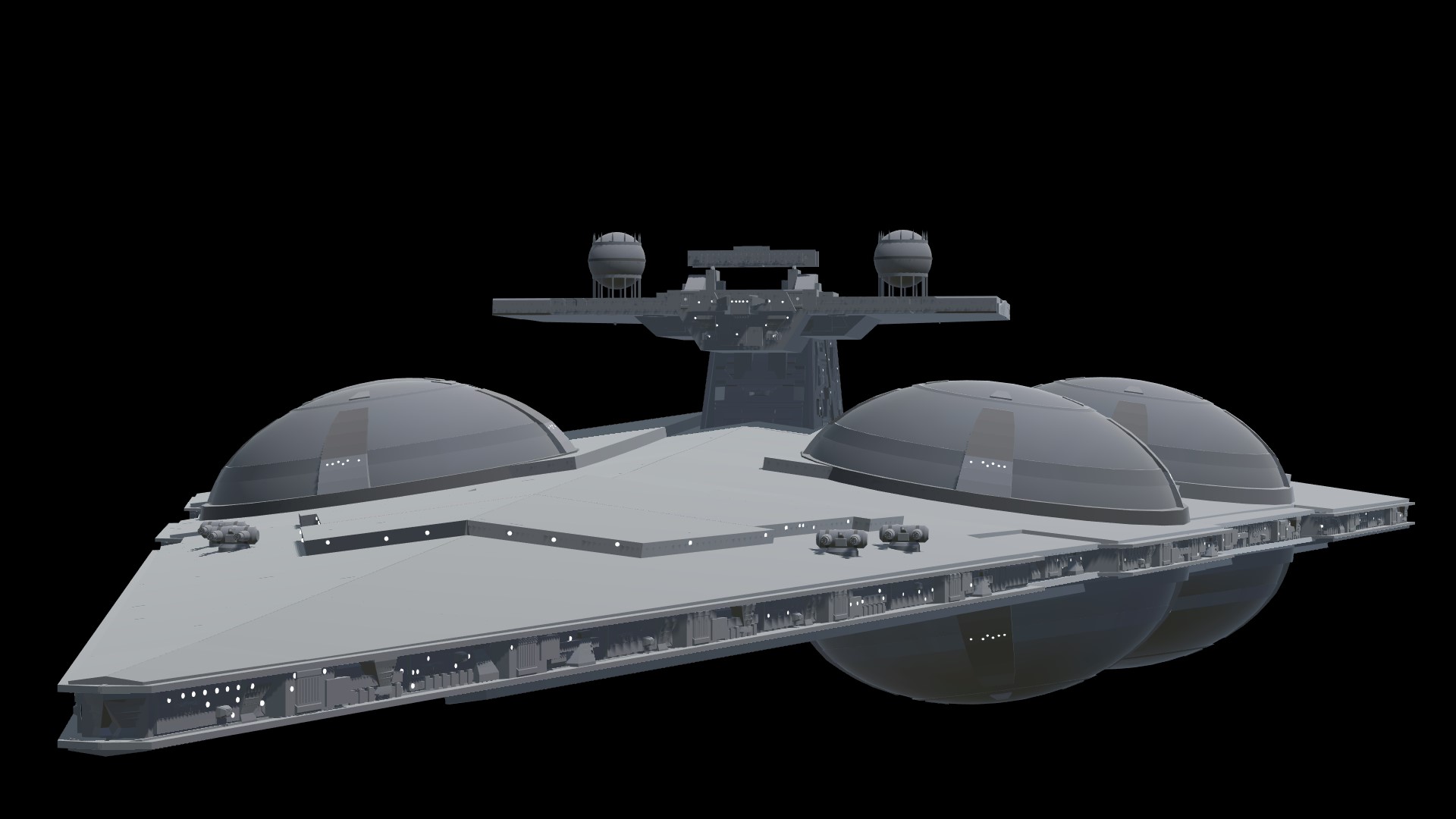 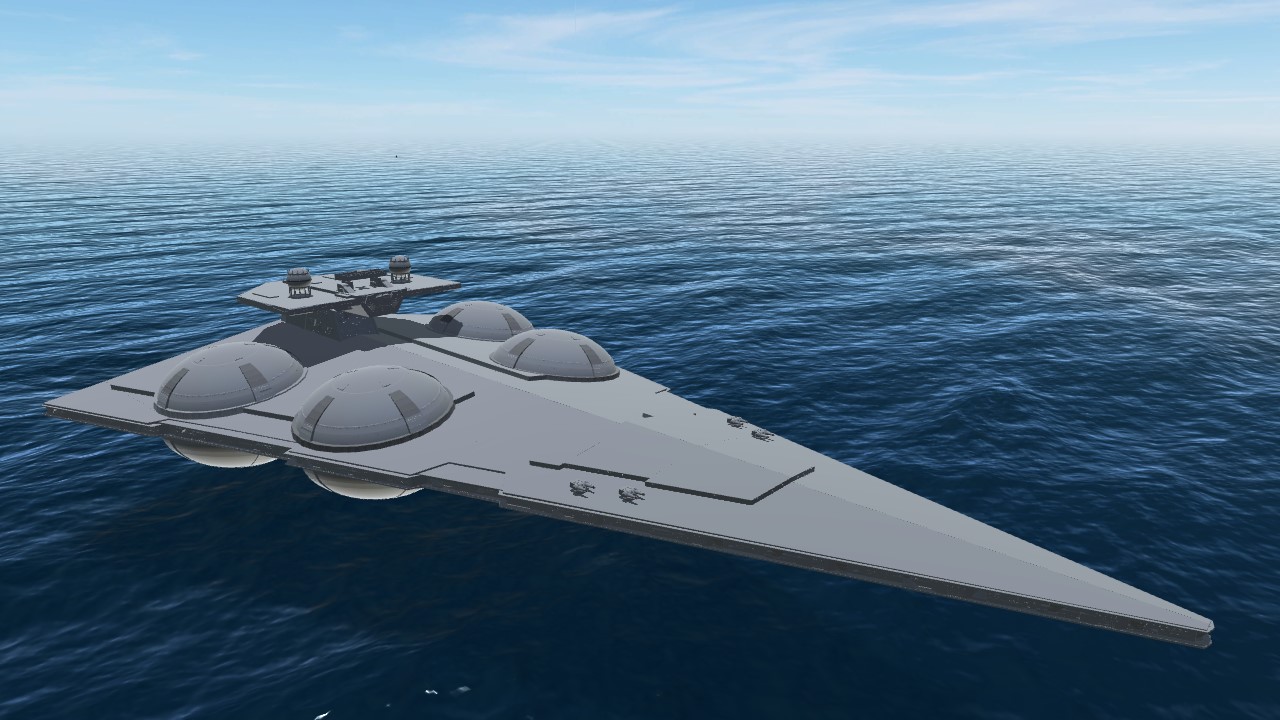 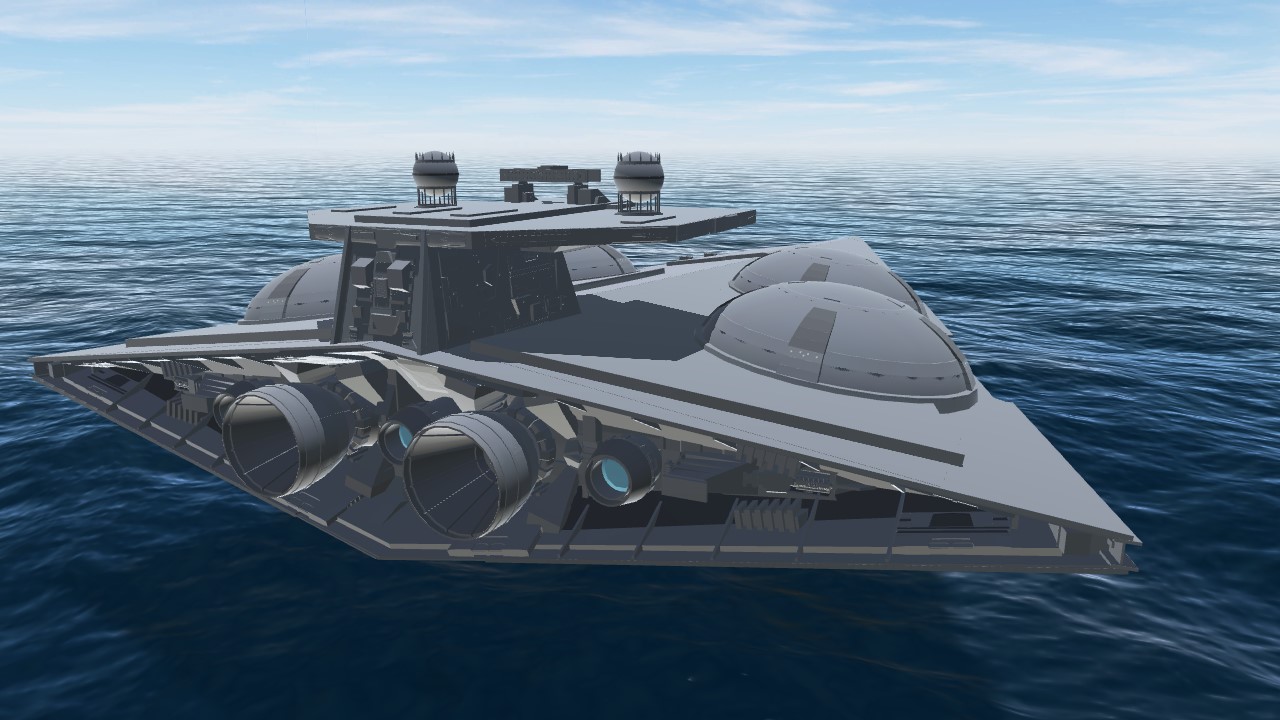 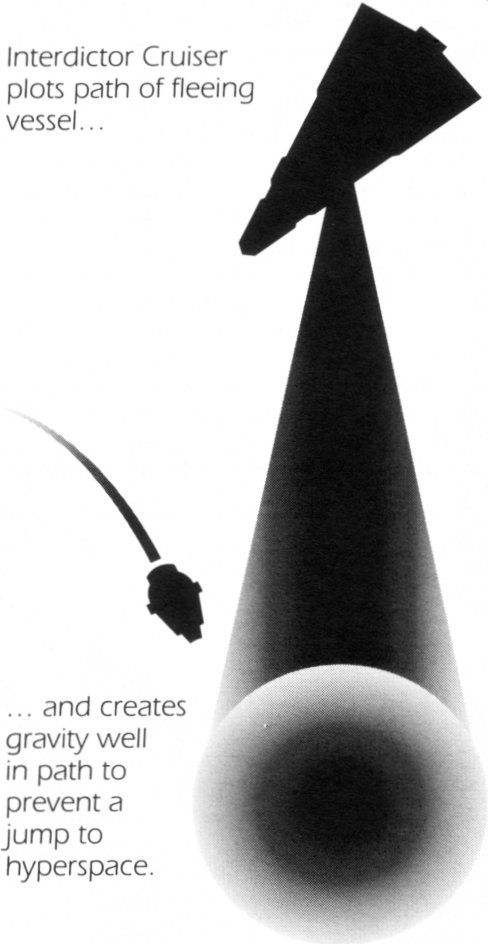 From the rebel dialogue, she was IIC ASSESSOR, a type 418 interplanetary cruiser. This type of warships in the rise of rebel, marshal admiral also used such warships will pull his fleet from hyperspace battlefield advantages, in order to obtain a level 418 fighters starship is a specially modified annihilates starship, the level of ship equipment strong gravity shaft generator's ships can be pulled out from the hyperspace, or trying to stop the enemy force and the trapped in the hyperspace jump move entity space, its tactical value is self-evident. The blocker class star destroyer is much larger than its prototype stagger 418, and its larger than stagger 418 reactor not only meets the huge energy needs of the gravity well generator, but also guarantees a higher level of firepower and defense.
Four huge gravity shaft generator, of course, still need room for huge hull interior and surface, and make the ship to have to the superstructure level changes significantly, and cancel the prototype ISD1 type in more than half of weapons to make room for gravity shaft generator and energy, also greatly reduce the number of aircraft, and seems to be completely canceled the carrying capacity of the ground forces. However, block level fighters starfleet after all use the same as the type ISD1 hull platform, has similar performance, less stagnation in 418 not only far better defense force (though than its prototype is still a certain degree of decline), fire at least also can protect themselves in the fleet or overcome various types of relatively small ships, relatively stagnant, the carrier aircraft and 418 more endurance makes enough to separate the ship with a long-range patrol blockade tasks without having to rely on the current protection. The blocker class of star destroyers soon became the imperial navy's weapon in battle with the rebels, working well on a variety of missions, although the number of builds and modifications was relatively small compared to the number of prototypes. I met many problems in her construction process, such as the lack of design 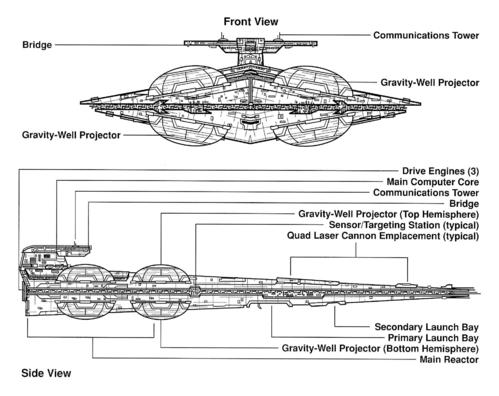 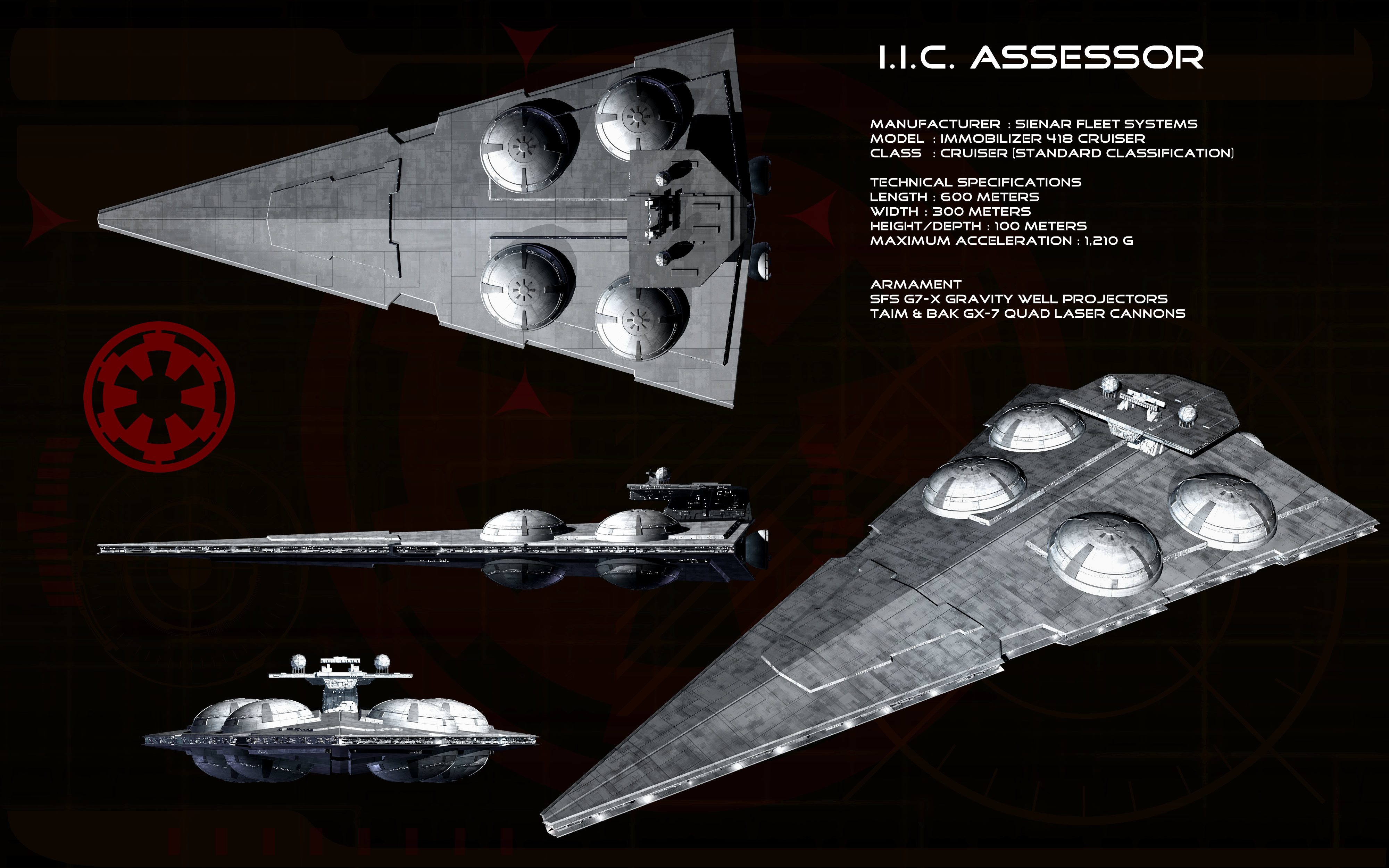 drawing, light and shadow, etc., and she finally came out with the help of her friends. Thanks for the help of @lzyyumi @701wwj666@realluochen9999. While playing with this star cruiser you may notice some problems, such as differences from the design! These are the two designs I found, quite different from each other, but I still referred to the first one, because it was in high definition. You can find a lovely shuttle in the belly hangar! This can be freely controlled!

Operation instruction :ag1 starts the mobile system and weapon. Ag2 turns on all the lights. The ag3 instantly slowed down. Ag4 releases the shuttle (the landing gear can be opened). The ag5 shuttles open folded wings. The ag6 turns on the shuttle's horizontal stabilizer and controls the top and bottom with trim. Ag8 suspension system. Attention! Do not fire vtol Max or min trim in the smallest hours when ag1 is using naval guns. That will damage itself! Ag4 should open ag6 and trim to around +50% before releasing the shuttle. You don't want to see the shuttle crash, do you? Use throttle and directional keys to control the shuttle, Landingear open the landing gear and door, control the shuttle and please close ag1 otherwise this star cruiser will be flying around! When the ag1 is opened, the gun is controlled with vtol and trim, throttle and brake control before and after, and roll control yaw. Don't turn at high speeds at wide angles, it can get really bad! As always, give me some advice! I hope you like her!? 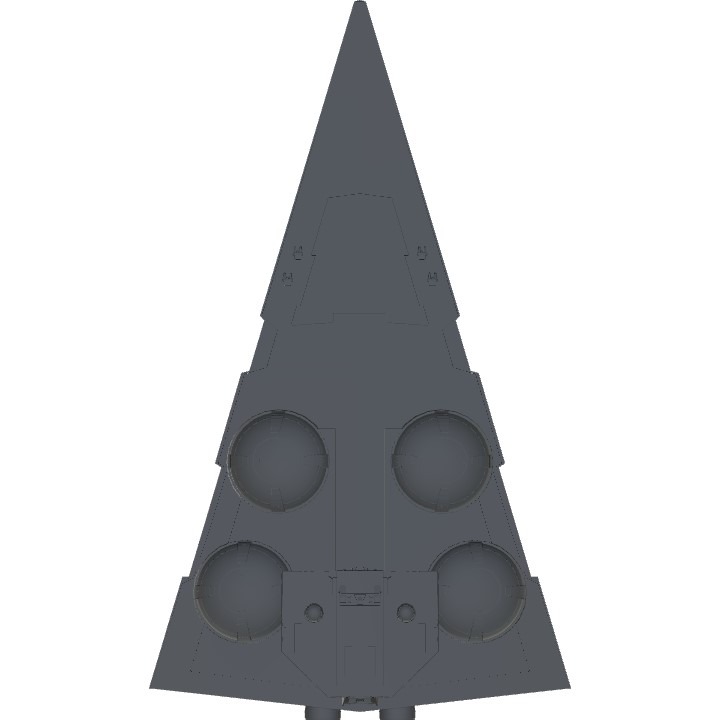 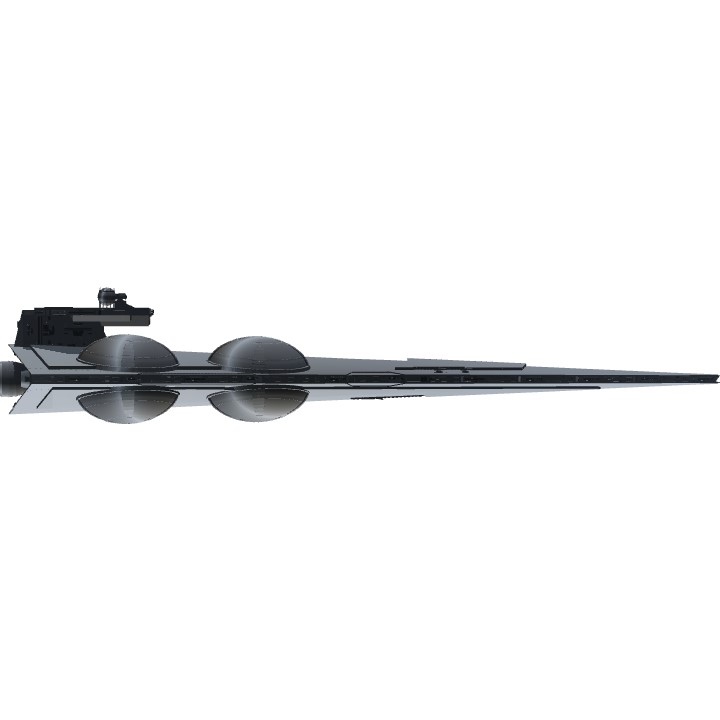 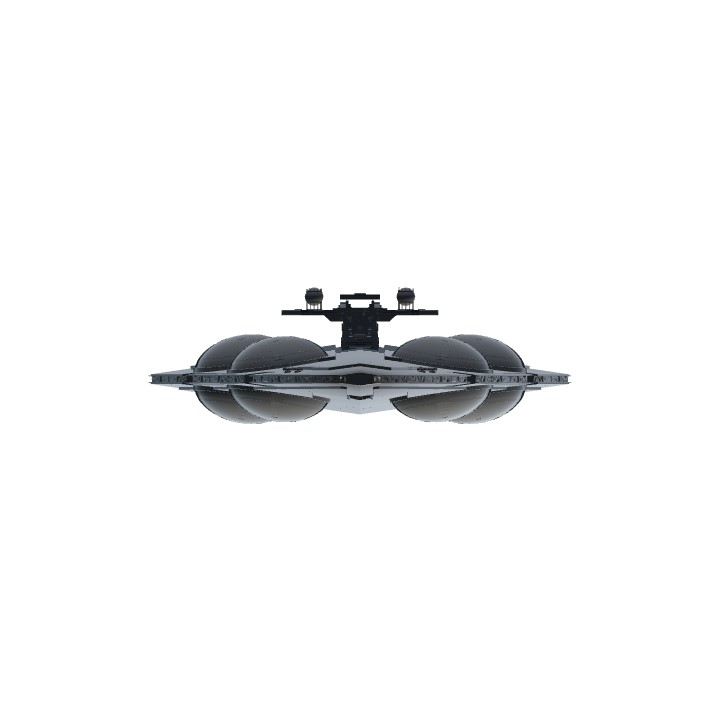