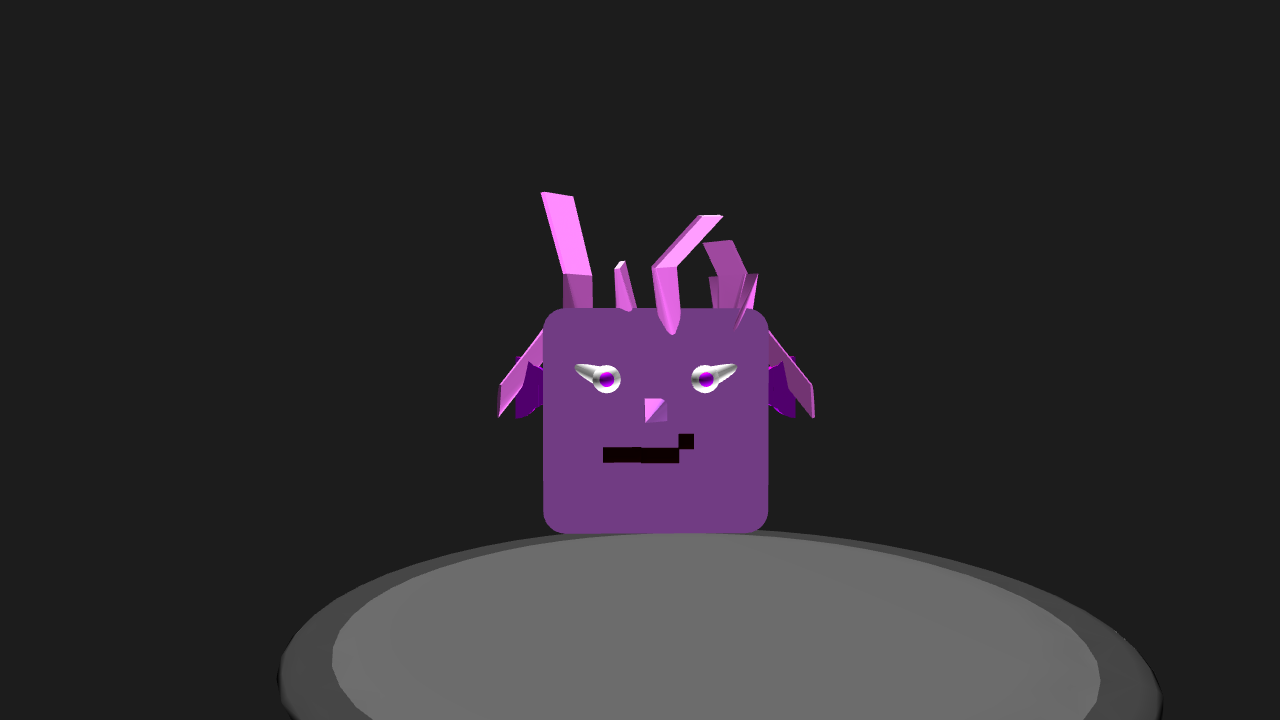 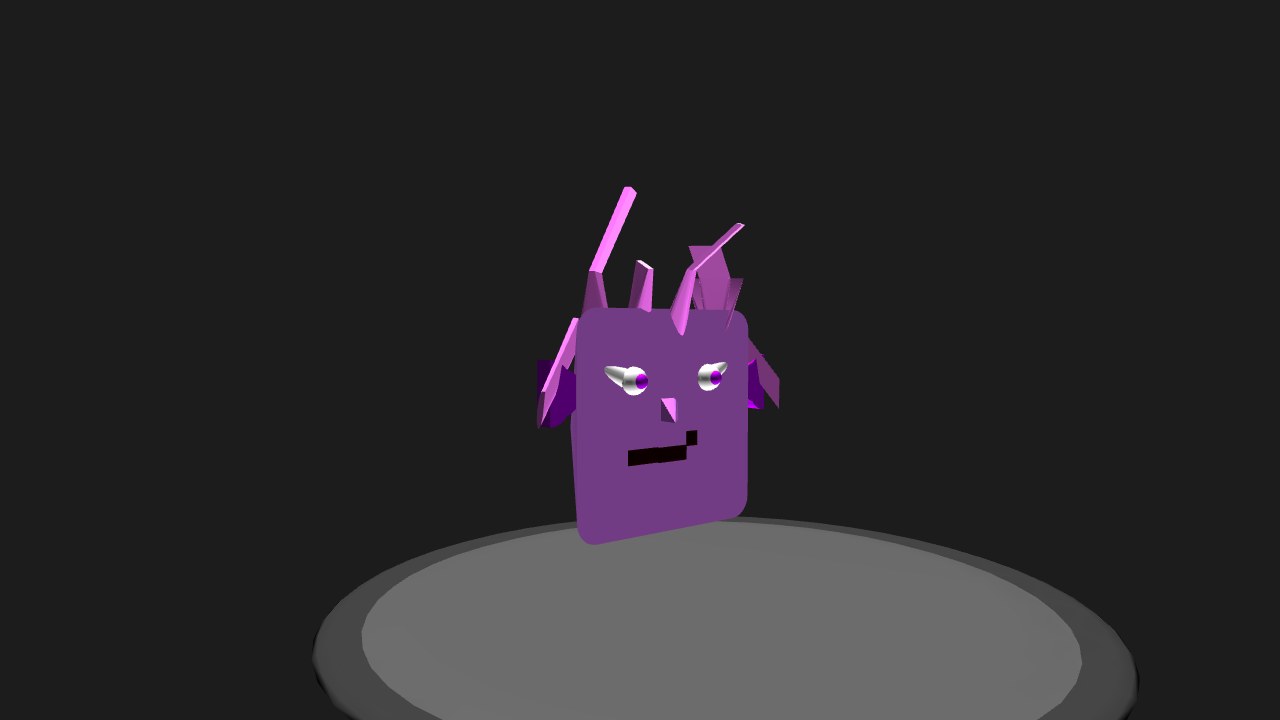 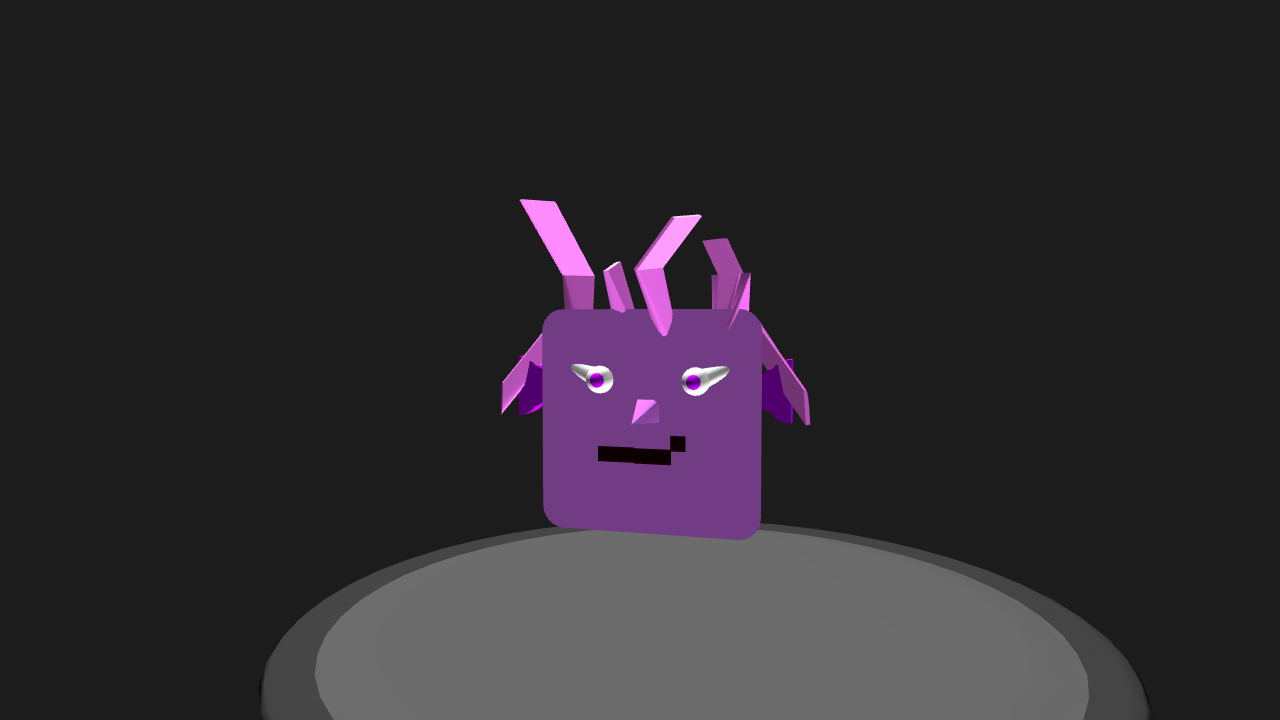 I love Kipo. Now here is some things about her! Kipo physically appears as a teenage human girl with pearly purple skin, thin black eyebrows, and pink lavender hair with a spiky fringe tied up in a ponytail with a dark-purple band, and dark fuchsia irises (her jaguar eyes glow fuchsia with night-vision).While living in the burrow, she wore a typical burrow boilersuit with the golden clover emblem on the back. Once on the surface, she changed her outfit to an off-the-shoulder T-shirt featuring a tiny pale-cyan circle with a fuchsia ring around it on the upper left corner. The shirt is layered over a dark-purple tank-top, and she wears dark-purple jeans and a pair of amaranth high-tops. She accessorizes with lime, cyan, orange, and black bracelets on her right wrist.As a Mega Mute, Kipo physically appears as a pink jaguar, and as her Full Mega Mute, she's a giant, pink jaguar with six legs, three tails, and a dark magenta fur stripe along her back.At the age of eighteen, she is taller, wears a biker jacket with the H.M.U.F.A. symbol on it, got her ears pierced, and has an undercut hairstyle (her side hair is cut short while the rest of her hair is still long).PERSONALITYKipo is a curious, friendly, optimistic, confident, and pioneering girl. Contrary to most humans and mutes, Kipo believes the two can co-exist and acts accordingly--much to everyone's surprise. Her plucky idealism stands out among the hardened cynicism on the surface and usually reveals her as a "burrow girl." In Wolf's opinion, Kipo can sometimes be a bit too friendly, which can sometimes get her into trouble with mutes. In addition to her unusual perspective, Kipo is clearly intelligent, as she is capable of thinking quickly in high-stress situations as well as solving complex mathematical equations uninterrupted for hours. She shares her father's love of astronomy and was dumbfounded when, after years living underground, she finally saw the night sky.HISTORYKipo grew up in the burrows under Las Vist where she was predominantly raised by her father, from whom she learned a great deal about natural sciences, music, and climbing. Kipo grew up underground, with no windows, and went to school with lots of other kids.

She was told that her mother had passed away (from a made-up disease called burrow pox) but really her mother had side effects from Kipo being part mute while pregnant, turning into the Mega Monkey.

One day while Lio and Kipo were climbing, a mega mute attacked their underground burrow. Lio threw Kipo into the canal to save her. He intended to follow his daughter through the canals to the surface but is blocked by the collapse of the tunnels and burrow.

Season 1
After Lio pushed Kipo into the canal to save her from the mega mute, she arrives on the surface. There, she is forced to fend for herself. She meets Mandu and starts on her adventure to find her home again.

She and Mandu encounter Wolf, who initially attacks Mandu for a "bacon sandwich". Kipo fights to protect Mandu and helps him escape, all whilst convincing Wolf to talk to her and to help her. Wolf reluctantly agrees after quickly realizing that a "burrow" girl has little chance of surviving above ground. She said she will help Kipo find her people and then will leave. Kipo gratefully accepts the help and they start their adventure- fighting off mobster frogs and giant bunnies in a quest to find her home and her father.

Kipo, Wolf, and Mandu meet Benson and his friend, a metamorphosis mute, Dave, who agrees to join their gang for the time being.

The gang finds Kipo's burrow, which has been destroyed. They continue their quest to find her people and to find the Mega Mute, who destroyed the burrow in the first place.

The group encounters groups of snakes, cats, wolves as they go on their adventure. Scarlemagne, a mute, is on a mission to find as many humans as possible to make them his servants. He wants Kipo to lead him to her burrow so he can trap her friends and family.

Kipo's father, Lio Oak, leaves her a letter, addressed to her with her birth sign- Aries. The letter includes a map that will lead her to the newly formed burrow.

The gang has to deal with a few more obstacles, like getting kidnapped by Jamack, but eventually, they find their way to Kipo's burrows backup settlement.

Kipo and her father, Lio, are reunited and Kipo's gang meets her old family and friends. Meanwhile, Scarlemagne was tracking them and plans to attack all of the humans. Lio gets captured and Kipo, furious, runs to go after them.

Season 2
In Season 2, Kipo sets out to rescue her father and her people after they are captured by Scarlemagne. She is also on a quest to discover the origin of her mute powers, thinking that the more she understands them, the more she will be able to control and use them. To find out more, with advice from her dad, Kipo goes to the Chevre Sisters to learn more. There, the sisters advise her to go to her parents' old burrow, the one they escaped from right after Kipo was born. They also advise her to find an "anchor", something that will help her transform back into a human after she becomes a jaguar.

With this information, Kipo sets out to go find the burrow. After a series of obstacles to get to the burrow, Kipo eventually discovers a journal, entitled "Project Kipo", with stories of her parents' past. Reading it, Kipo learns she was experimented with mute DNA by her parents before her birth, turning her into a half-human, half-jaguar hybrid. She also finds a family photo from when she was a baby, which she realizes is her new anchor.

Eventually, Kipo learns about Scarlemagne's tragic past and his ties to her family, and that her mother Song, previously thought to be deceased, is actually the mega monkey who destroyed her burrow, mutated as a side effect from her pregnancy with Kipo and mind-controlled by the manipulative Dr. Emilia.

Kipo tries to connect with Scarlemagne, formerly known as Hugo, to get him to see reason and let the humans go. She thinks she gets through to him, but he tricks her at his coronation. They fight, but Kipo starts to lose control of her abilities, putting her at risk of transforming into a mega jaguar permanently. She is faced with a decision- save everyone and transform into a jaguar forever, or fight and probably lose to Scarlemagne as a human. She becomes a jaguar, saves everyone, and her friends and family tear up thinking that she is gone forever. In the next episode, she is able to regain control when wolf sings there teams song.

Meanwhile, Dr. Emilia has turned most of Kipo's people over to her cause of reverting all mutes back into normal animals so human civilization can rise again. Kipo hears this and knows she has to rise up and fight Dr. Emilia.

Season 3
In Season 3, Kipo is on a mission to find Dr. Emilia and the other humans who are hiding with her. She and the mutes search for months, to no avail, until finally they realize she is on a cruise ship and has been moving this entire time. Kipo is desperately trying to band all of the humans and mutes together to form an alliance - HMUFA (Human Mute Ultimate Friendship Alliance). She has to convince the mutes to bond and work together, despite their differences, which takes some work. There is a lot of distrust in the mute community, and Emilia makes things worst by starting to kidnap mutes.

After Emilia makes the cure, Kipo is set on destroying it and bringing Emilia to justice. The other humans believe everything Emilia says, which makes things difficult, so they help Emilia attack the mutes. After Kipo manages to transform her mom into a human again, Song and Lio help Kipo figure out how to make peace.

Kipo tries to appeal to everyone and create the "Prahm", a dance to unite mutes and humans. She invites everyone, even Emilia, but Emilia decides to ruin the prom by raining the dance in the cure. Kipo is furious and fights Emilia, who turns herself into a giant mute monster. They duel it out but eventually Emilia loses.

Kipo returns and mutes and humans are all safe once again.

Five Years Later
Kipo is walking through a rebuilt Las Vista as her dream of humans and Mutes coexisting in peace is now reality. She is seen visiting Hugo's statue to give him a status update about what's been happening. Kipo then place a cupcake on statue as gift to her late brother wishing him a happy birthday then goes to have a picnic with her friends and family. She was last seen frolicking with her friends riding on Mega Mutes.

POWERS AND ABILITIES
Kipo's powers were the result of a project of the same name, created by her parents, Song and Lio. The project was meant to combine mute genes with human genetics, thus granting mute abilities to humans with the intention of giving humans a fighting chance to live on the surface if they had mute abilities to protect them.

Kipo's DNA
1/7
ADD PHOTO
Night Vision - Due to having the DNA of a Mute Jaguar she can see very well in dark places and at night.
Enhanced Smell - Her sense of smell was enhanced due to the DNA of a Mute Jaguar.
Enhanced Strength & Speed - Due to having the DNA of a Mute Jaguar she has both the speed and strength of one.
Shapeshifting - Kipo can transform any of her appendages into those of a jaguar- including her nose, ears, and canine teeth. This includes adding certain body parts that she, as a human, does not have an equivalent for (example; her tail).
Jaguar Limbs - She can shapeshift both her arms into a set of jaguar arms for combat.
Shapeshifting Mode Lock - If Kipo shapeshifts into the Mega Jaguar, she may not be able to return to her original form. The jaguar and she are presented to be two different 'personalities'. When Kipo becomes the jaguar, her own personality goes dormant.
Puppet Pheromones Immunity - Due to being part Mute Jaguar, Kipo is immune to Scarlemagne's puppet pheromones, as they only affect primates.
Cure Immunity - Since it was made from her own DNA, Kipo is immune to the mute cure. 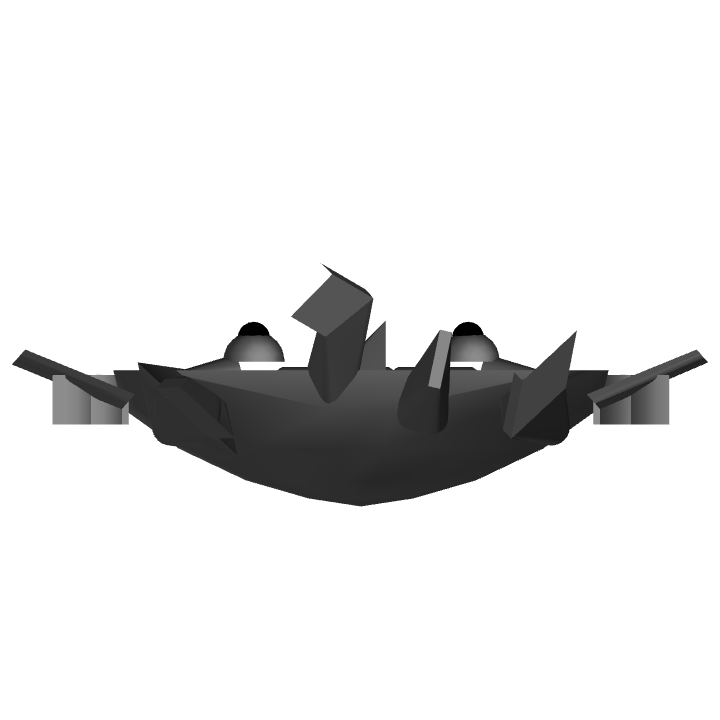 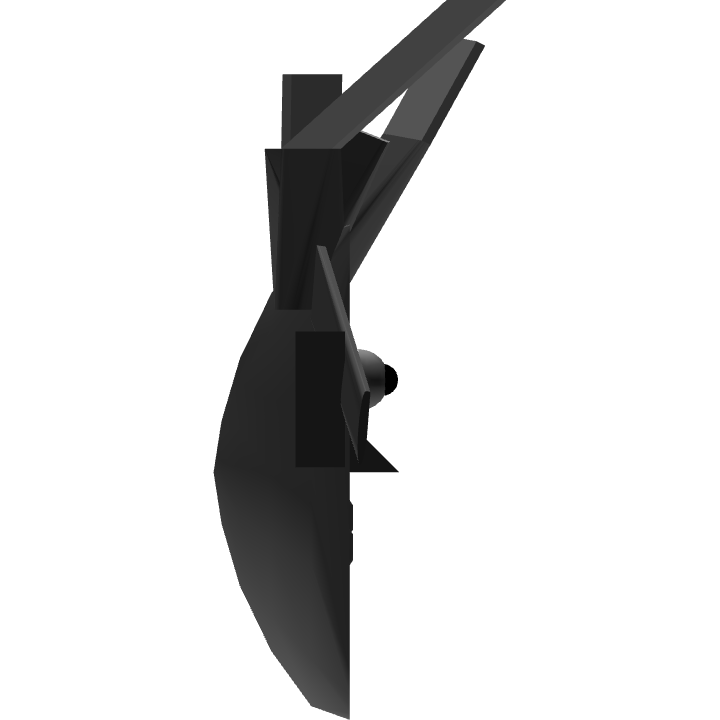 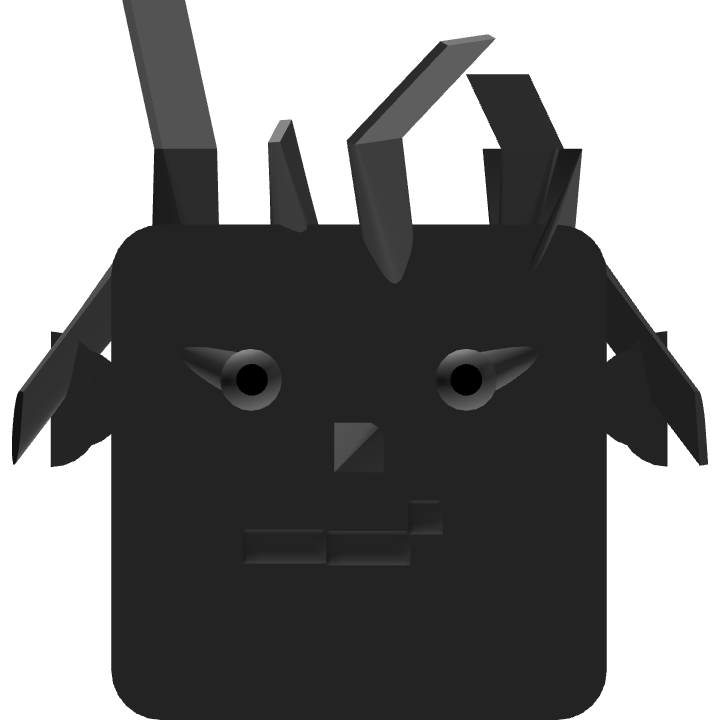