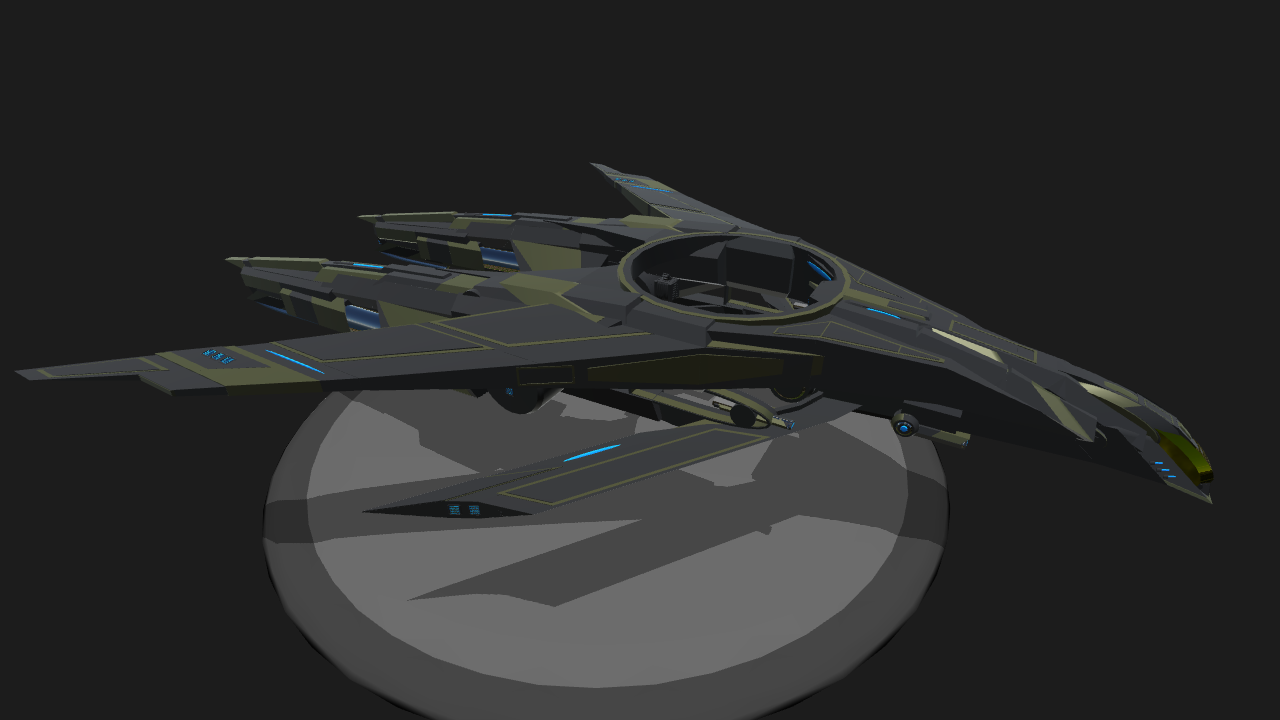 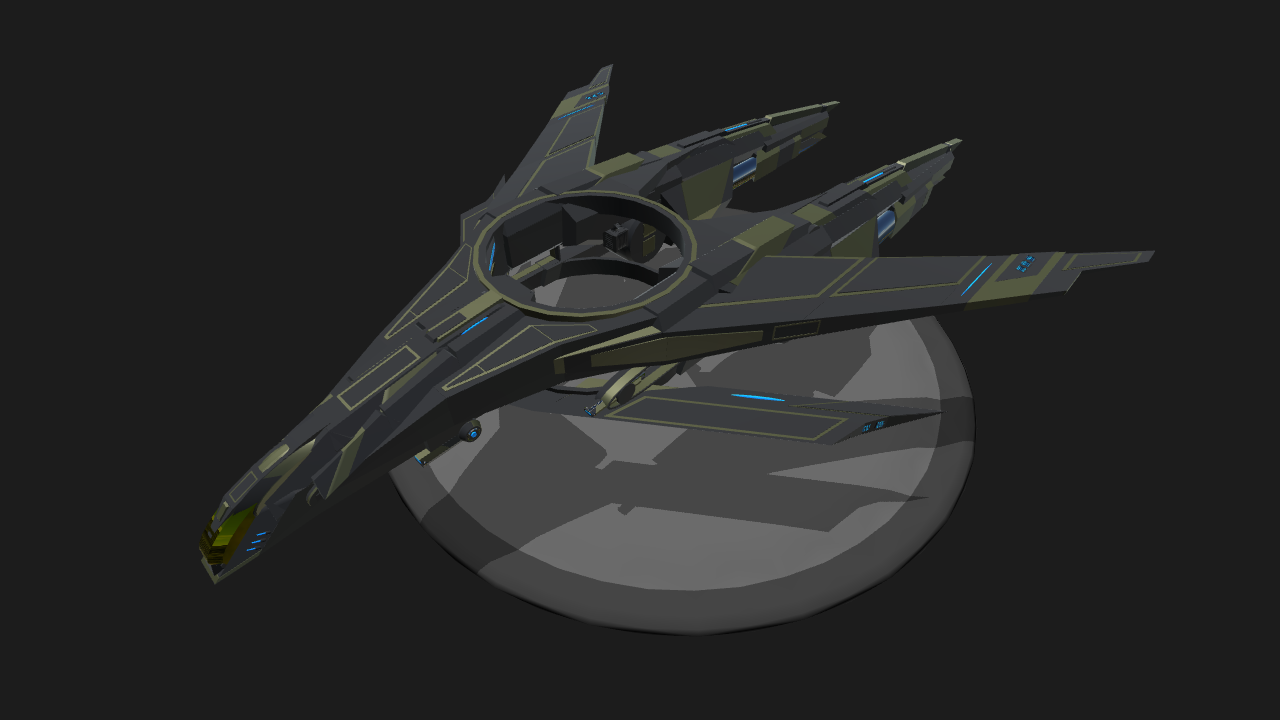 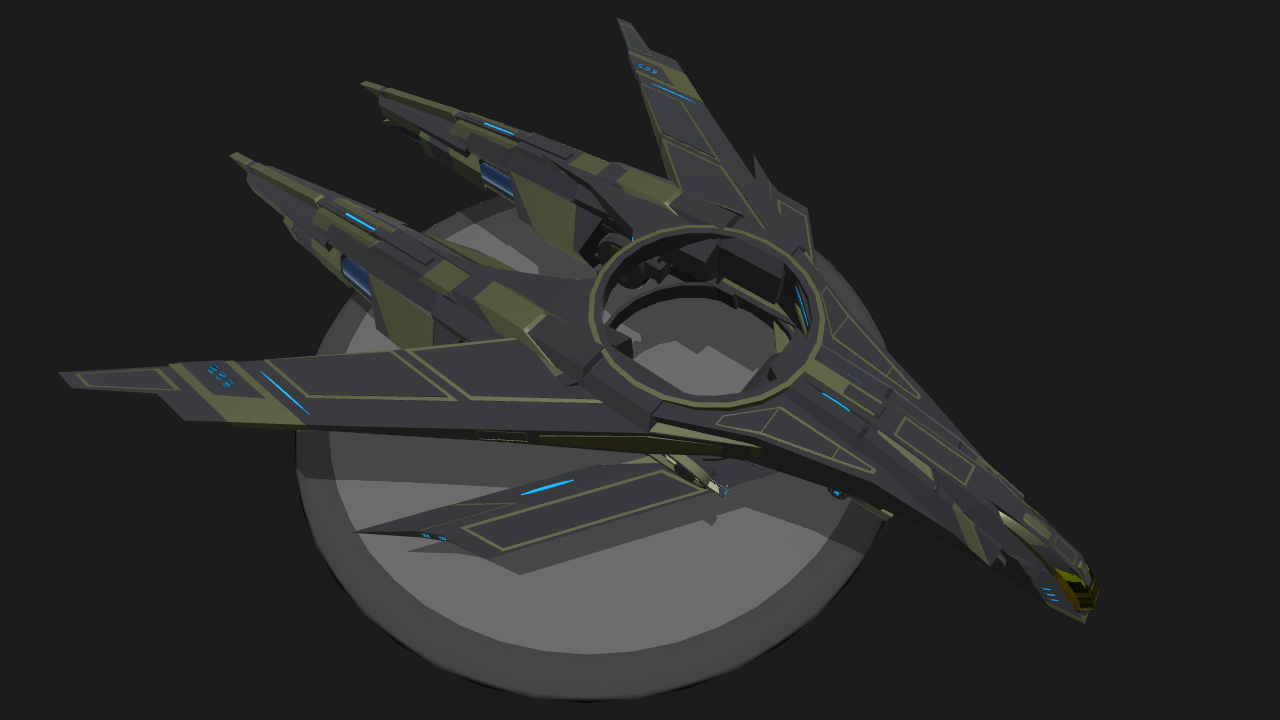 “I refuse to let the past imprison me - forward motion is my only option.”

It has been a while since my last post. Hope that this makes up for it!

Tips
- Activator 2 is very useful. Use it to land vertically (with the brakes [VTOL] too!).
- Do not make any sudden maneuvers after you have stopped cruising with activator 1, or else you will lose control of the aircraft (it’s a bug, but this airframe is too odd to fix it…)
- Regain control of the aircraft with activator 2
- When activator 2 is on, trim will control pitch orientation
- Go easy on minelaying. Your device might complain…. A lot.

Takeoff Instructions
To take off, press activator 2, and move the trim bar (slowly) up a bit. Then add some thrust with the throttle. Feel free to de-activate activator 2 when you get up to speed.

Landing Instructions
Landing is best done vertically. To do so, activate group 2, and fly over your landing spot (at about 300 mph or so). When you are above the landing location, bring VTOL up to activate the brakes. Cut the throttle to stop moving, or use your thrust to make fine adjustments before you float down to the ground.

MIDAS stands for “Minelayer’s Integrated Defensive Aerial System”. It includes Corvidae’s main guns, MIDAS standard mines, and MIDAS force-augmented mines. It should be noted that, when all of the weapons are used heavily at once, you will experience lag. A fast-firing ATG system consisting of inferno missiles, REPULSE [BETA] was also added.

REPULSE [BETA]
Corvidae sports a missile-based ATG system, that, functionally speaking, is a cross between a cannon, and a missile. Fast response is gained at the cost of missile maneuverability.
- Fire using inferno missiles.
- Lock, aim, and fire.
- Aim is necessary! Try to line the target up with your crosshairs before firing.

The Crow family, or more technically denoted, Corvidae, consists over 120 birds - all overshadowed by a single notable member, the crow. While such categorization is seemingly unfair, the crow does, however, display traits quintessential to the family. An inquisitive demeanor, combined with surprising wit, categorizes the bird as a mysterious individual. Corvidae, or more specifically, the SPE-Orbidyn Corvidae minelaying aircraft, mirrors such characteristics through its design, role, and appearance.

Primarily designed by SPEcorp and Orbid Dynamics, Corvidae carries a prefix signifying the collaboration of the two organizations, SPE-Orbidyn. Such collaboration is fairly common, as Orbid Dynamics was a former branch of SPEcorp, that split from the company to avoid regulatory hurdles. SPEcorp works with Orbid Dynamics for reasons similar to the cause of the severance – creating a regulatory grey area was necessary when SPEcorp began to implement self-regulatory policies relating to weapon potency, as well as aircraft maneuverability.

Information relating to the design process of the aircraft is highly controversial. Rumors imply that aspects of the design were taken from stolen 21st-century technical documents. More alarmingly though, the rumor states that the stolen documents were, allegedly, taken on September 20th, 2019, from a military installment located in the deserts of Earth’s North American Continent.

(Oops. This was supposed to be a successor to the Area 51 challenge. That’s ok, here’s a link if you want to participate!)

Conspiracy aside, the (hopefully) primary entities behind SPE-Orbidyn Corvidae designed the aircraft to host a variety of technological advancements in weaponry and propulsion. Corvidae delivers potent combat options in a unique niche, and represents the final realization of the hyper efficient, fully throttleable, propulsion concept known as Trigonometric Thrust.

Corvidae was designed to be a prominent presence in an emerging niche of air-superiority combat, aerial minelaying. Results are delivered through the aircraft’s MIDAS loadout, to secure large expanses of airspace, as well as complete secondary ground-related combat missions. An acronym for Minelayer’s Integrated Defensive Aerial System, MIDAS refers to three weapons designed alongside Corvidae, the Standard-Configuration Aerial Mine, the Force-Augmented Aerial Mine, and Corvidae’s main guns.

Both aerial mines are similar in use, but apply damage in different fashions. Standard mines apply damage in a literal sense. Aircraft parts disintegrate upon contact with a MIDAS Standard-Configuration Aerial Mine. Force-augmented mines are more nuanced in function. Large forces are applied onto the airframe of an unauthorized aircraft that comes in contact with a MIDAS Force-Augmented Aerial Mine. As a result, contact causes weak airframes to disintegrate immediately, and strong airframes to be flung far away from Corvidae’s territory.

Tertiary to the MIDAS loadout is Corvidae’s main guns. These forward-mounted, dual weapons combine user-friendliness with high damage to increase the combative flexibility of Corvidae.

A final weapon, not considered to be a part of the MIDAS loadout, was added to expand Corvidae’s ATG capabilities. REPULSE [BETA], a fastfire inferno missile, can potentially make conflict swift and decisive. The weapon is the functional equivalent of a missile crossed with a cannon, and therefore sacrifices some user-friendliness for an exceptionally fast response time. 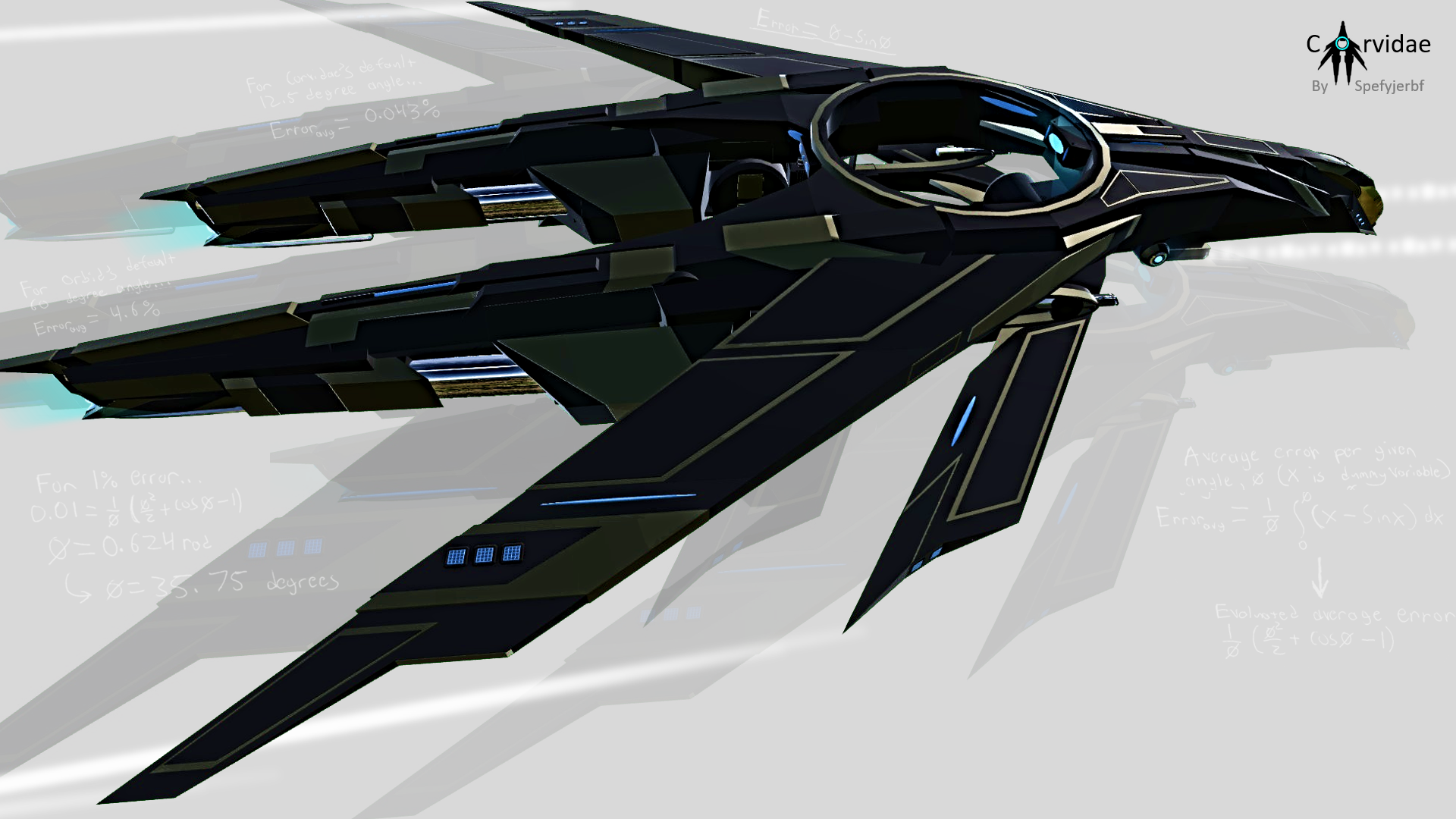 Math time.
Corvidae’s realization of Trigonometric Thrust was arguably the driving force behind the development of the aircraft. The foundational knowledge for Corvidae’s hyper-efficient propulsion system, the EF2-TR engine, was well-documented and expansive. Orbid, as well as some extent of Singula, were designed while exploring the new propulsion system.

Put simply, the EF2-TR engine is composed of modified jets that consume extremely small amounts of fuel. These jets, though, are not throttleable – their force output is locked at maximum.
Such an issue can be solved by allowing the jets to rotate with a throttle input; engine output becomes throttleable through dissipating force perpendicularly. Still, though, the system is not perfect. The effective thrust is described through the sine of the jet’s angle of rotation (hence the name, trigonometric thrust), which does not match with throttle input. In a standard configuration, 50% throttle would yield a thrust output equivalent to 71%.

This issue can be mitigated by decreasing the angle of rotation. A small enough angle would allow the effective thrust to be nearly linear in throttleability – a conclusion derived from the concept of small angle approximation. Corvidae’s goal, then, was to determine the minimum angle needed for such approximation to be valid.

The metric used to find such an angle was average error. Error, in this case, is defined the percentage of difference between the force outputs of linearly throttleable thrust, and trigonometric thrust. This definition was converted into a mathematical function, which was further used to create a function that described average error. The resulting average error function can be manipulated mathematically to determine the mean error associated with any maximum angle of rotation.

This usage of small angles does, of course, waste a massive amount of thrust. Thankfully, the EF2-TR engine produces enough thrust to, even in the presence of dissipated thrust, propel an aircraft without issue. This unused thrust, though, is not completely useless. Expanded rotation of the EF2-TR’s jets delivers a boost functionality without extra fuel consumption or engine redundancy (Credit: ThomasRoderick).

Plans to publish each iteration of fuel-efficient jet technology, up to the EF2-TR engine, have been discussed. Some models are already readily available, such as the first-generation, non-throttleable, EF1 Engine. Newer models, such as the EF2 Engine, found on the Singula Aircraft, as well as each iteration of trigonometric thrust, will also be added. More specifically, the EF1-TR system, from Orbid, as well as the aforementioned EF2-TR system will be made available in the future.

Much appreciated if you read all of this. Special thanks to various members of SPMC for their feedback! 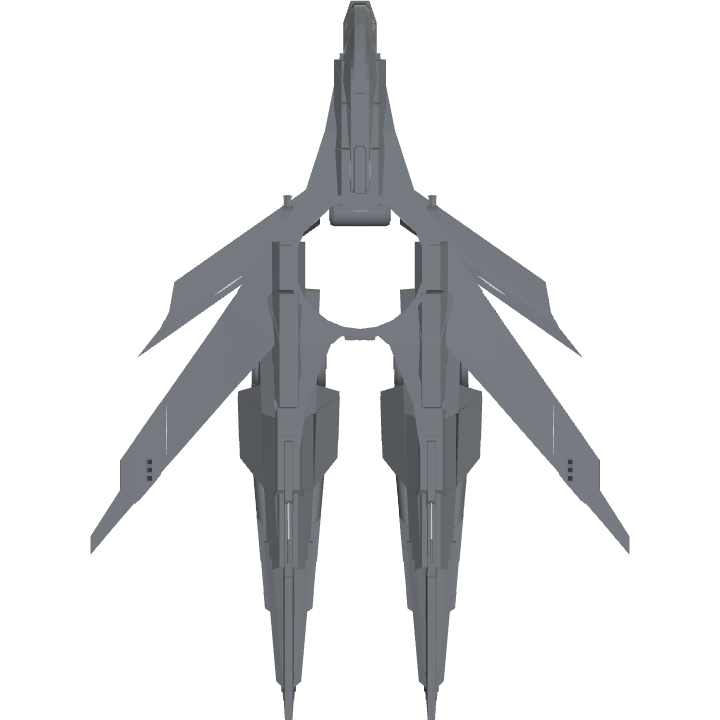 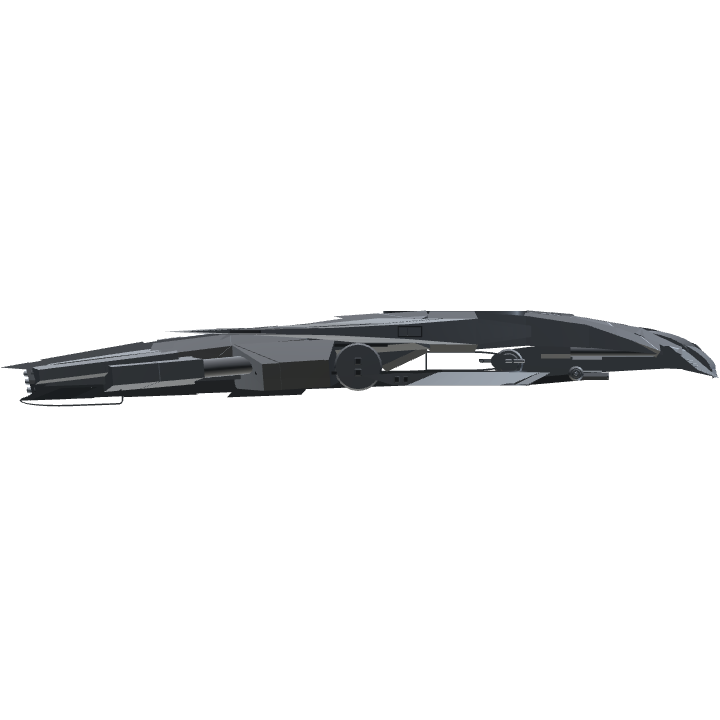 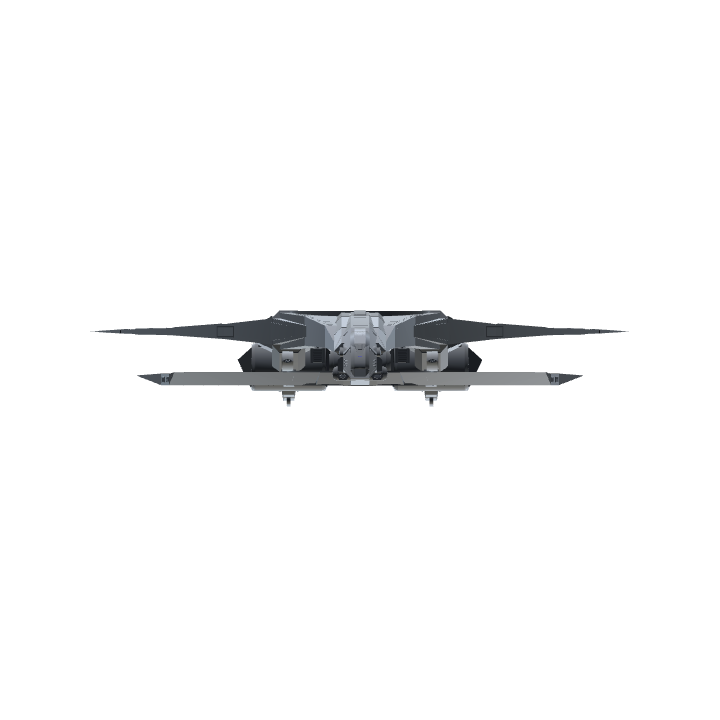