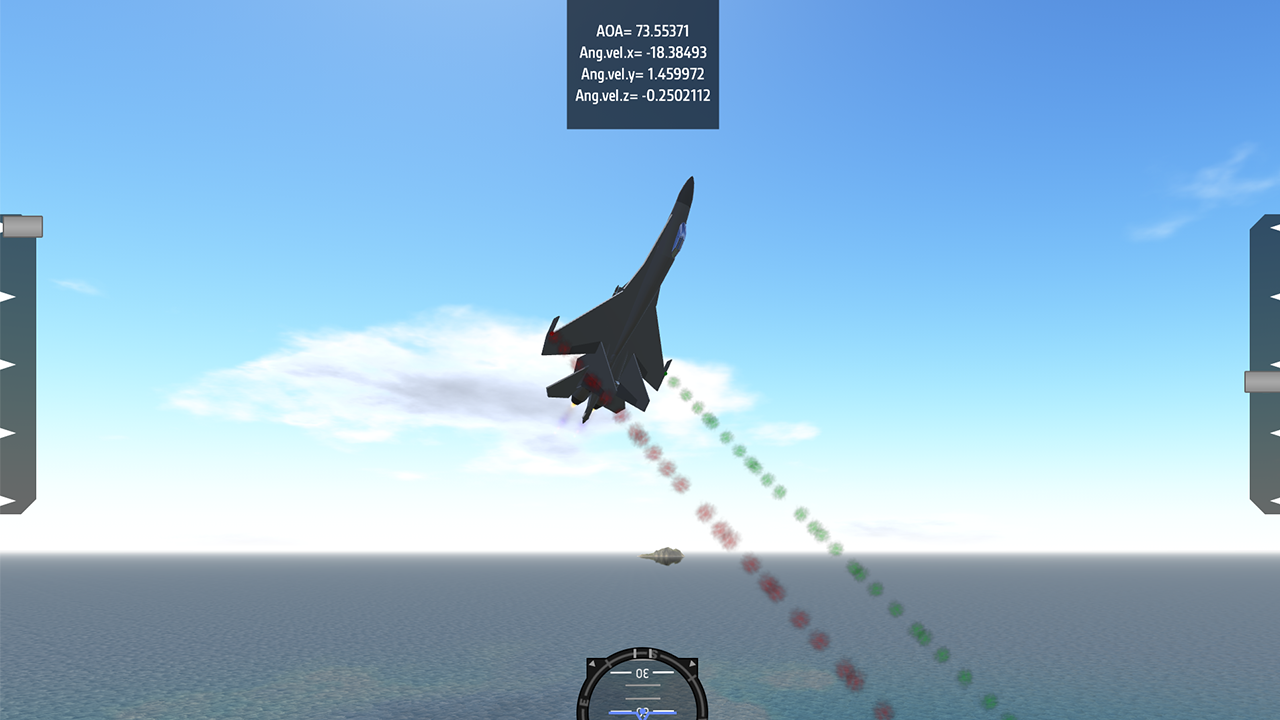 Attention! This description contains big count of pictures and gifs.

This block need for control surfaces/thrust vector of engine.
There is a two types of fly-by-wire for pitch control (horizontal stabilizers/canard wings/thrust vectoring), same two types for yaw control (vertical stabilizers) and one type of fly-by-wire for roll control.
The first type of control ( for pitch and yaw) is the control by angle of attack (AOA). This type is the most simplify for use. The second type of control (for pitch and yaw) and one type for roll control is the control by angular velocity.

Angle of attack control:
The first action what you should to do - attach computer block to your airplane.
For correct work for pitch axis the rotation of computer block must be (0,0,0):

.
After that select the block, scroll down and find a two input controllers:

By default activation group 8 are enabled. This mean that at the start fly-by-wire will work, but you can disable it. You can set any activation group via overload mod(in the Input label, not in Activation group label)
After that scroll up and select "AOA" in "Type of control" attribute:

Then choose your output axis. It's "VTOL" by default. The rotators of stabilizers/canard wings must have the same axis in the input controller:

In this case the airplane will swinging and the good flight will be impossible.
You must find optimal value for your airplane. For unstable airplanes i don't recommend to set it more then 2.
Recommended sensitivity for unstable planes=0.5...2
Damper-this attribute improve the control. He consider speed of angle of attack changing.
Without damper:

Recommended damper for unstable planes=1...2
The damper create a jittering.
After that attributes you can see label "Start decrease AOA:####".
You can see a slider below:

This slider set a speed after that "Max AOA,deg" begin decreasing. This can improve comfortable of control on high speed: when your pull up control stick at the 600 km/h the computer block will try to set airplane AOA, for example, 7.5 degrees instead 15 degress.
Mathematics examples:
If you set slider km/h = 400, decrease coefficient= 1, Max AOA,deg=15 then:
While speed of your airplane less then 400 km/h the maximum AOA=15. When speed of your airplane = 600 km/h than maximum AOA=7.5.
See the pictures:

This graphics illustrate mathematical formulas. decrease coefficient-it is the coefficient of incline.

The settings for this completely analogous except rotation of the computer block.
In this case vertical stabilizers will try to fly with some angle of drift.
This work like this:

That's all about angle of attack control.

This type of control have same attributes as control by AOA except "Damper":

This attributes work like attributes of control by AOA, but with reference to angular speed.
Recommended sensitivity for unstable planes=1... 1.5
You can see a new attribute: Set angular axis.
You should to choose axis from which angular velocity values will be taken.
Set X for Pitch, Y for Yaw and Z for Roll.
The rotators of surfaces with this control type will be jittering:

For this reason is not comfortable to use "control by angular velocity" on high speed.

It is possible to use fly-by-wire for each axis and make 3-axis controlled by fly-by-wire airplane:

That'a all about angular velocity control.

The control by anglular velocity it's no comfort for high speed from the reason of control surfacrs jittering. You can toggle to control by angle of attack, if you will use both types of control:

The example flanker airplane in the beginning of the description have a many "fuselage wings" with different leading edge angle. I don't recommed to use it.
But in your own airplane I recommend to use little count of wings with enabled wing physics, like this:

Also, i recommend to use same leading edge angle for main wings and for fuselage wings.

If you already trying to fly of unstable example airplanes, maybe, you have saw a very unpleasant feature of airplanes with rear stabilizers- uncontrollable roll rotation on high angle of attack:

So, it is a negative feature of classic type. Angular velocity control for roll axis can a little bit improve it.
The type of airplane "Canard" like Jas-39, Eurofighter Typhoon or Mig-1.44 controlled better.
The computer block have a last one attribute below title "Other:####".
Nonlinearity-set a nonlinearity dependence output from input. It make a more comfortable control - it's improve accuracy at the little movement of control stick of airplane.

The nonlinearity work even fly-by-wire are disabled(the value of second input control=0). It can increase accuracy of control even if you don't want to use fly-by-wire.

Not each unstable airplane it's possible to improved by computer block.
Obviously that computer block cannot control airplane with this center of mass position:

If you want to know, is it possible to control your unstable airplane by computer block, you should to do these actions:
1.Spawn in air on unstable airplane without fly-by-wire system. Your airplane start to nose up.
2.Pull of the control stick:

If over time your airplane start to nose down and angle of attack become negative (you should to feel it), pull up the control stick:

Also, i recommend to you break the example airplanes and look the computer block's values, values of rotators of stabilizers and its input controllers via overload mod.
That's all about computer block.

This block do output axis value = angle of attack.
This need for correct rotation of wing slats:

If you want that slats must rotate only one side, don't forget to limit min/max value in input controller of rotator:

That's all about slats block.

This block limit the maximum values of selected axis depending speed:

Also, it can simulate controls of fighter airplanes of WWII, when pilot was hard to pull on control stick on high speed.
The attribute Nonlinearityworks like same parameter in computer block.
I recommend do not use limiter block with computer block. And recommed use or limiter block, or computer block on your airplane.
That's all about Limit block.

In third/fourth condition you can select Ang.vel (angular velocity) instead AOA(angle of attack).
In this case you should to select axis of angular velocity- X,Y or Z.

You can see the axes of angular speed on the picture:

The rotations counterclockwise are considered as negative. Clockwise-as positive.
If you use conditions of angular velocity the rotation of condition block must be (0,0,0).

About angle of attack:
If you want to use condition of angle of attack, then rotation of condition block must be (0,0,0).
In this case AOA considered positive when nose of your airplane rises:

If you want to use condition of angle of drift, then rotation of condition block must be (0,0,90).
In this case AOA considered positive when nose of your airplane "turn left":

Also, values of angular velocity and angle of attack you can see in game if select condition block attribute "Show aoa":

It can help you if you want to check values.

Also, you with condition block you can automatically toggle between angle of attack control and angular velocity control in computer block .
That's all about condition block.

I hope this mod allow you to create a very interesting control systems on your airplane.