Okay, so from here on out, this will be my B-36 construction progress forum. If I get SP on my computer, I want to redo this project much like how WIZARD2017 is doing their B-29, a full panelling job and all. Anyways, if you want to be Tagged, put T in the chat. Here we go.

^Here is a cutaway^ (note: I am NOT adding the gunner turrets. Just the rear one)

Okay, so I've fully started doing research. This will be some features I want to implement. Now, this plane will be based on the actual plane. Full EVERYTHING. I'm not going to start building this aircraft until the update because, you know, gauges, and cut fuselage parts.

Anyways, here they are:

Okay, so first off, what do I mean about the trim tabs??
Okay, so on the B-36, because of how large it was, it was seen as impossible to power the control surfaces with hydraulics. Instead, motor-powered tabs moved in the opposite direction of an input in the cockpit, this causes the control surface to move in the direction you want it to through air flow. Like a mini plane. The control surfaces are basically just floppy. The flaps are, however, hydraulic
LINK TO BLUEPRINT WITH THE TRIM TABS AND EVERYTHING

Also, I'm going to try to add controls for each of the props, and each of the jets. This will likely cause me to have to add special inputs for the nukes, and the turrets. The jets were activated in pairs of two, so I need AT MINIMUM 8 inputs. I hope they add more input options in this update
With that in mind, I want to add reverse thrust on the props, MAYBE feathering of the props when they are deactivated, and I believe the aircraft had a drogue chute, but I will need to do research on that

I wasn't expecting to add an update this early, but basically, I have now tested out a testbed for the trim tab movement. Surprisingly, it works!!
It's so baffling to see a part move the wrong way, and somehow make it work in the end. I do, however, need to build a system that will keep the floppy rotator from rotating when there is no input (any and all help is appreciated). So yeah, minor update

Here is the main gear. I need to learn how to add delays to the doors and stuff, but this is the basic design... yeah 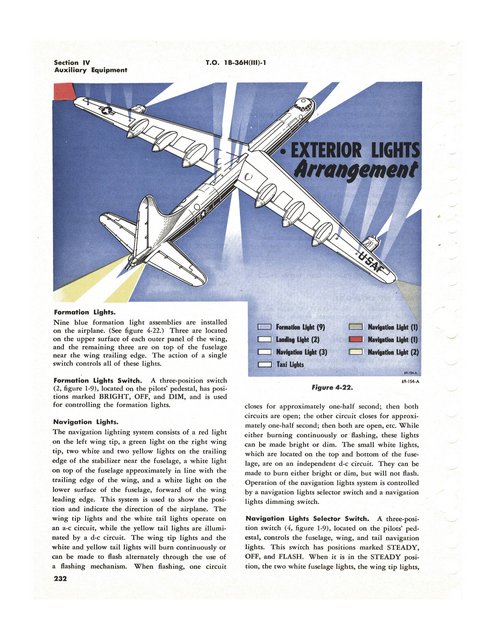 Okay, so, I have done some research on the lights on this aircraft. Due to the issue of not having enough inputs, even if they increase it to 10 or 12 AGs (which, I hope y'all do, devs :)), I will have to set the input for the nav lights to an AG group, and the Landing/taxi lights to either the VTOL controls, or to the Landing gear button. Or both?

Also, having done more research and though into the aircraft, I now know how I'm going to do the reverse thrust and constant speed on the props. The engines are going to start at a neutral pitch, that way on start up it does not create any issues with pushing the aircraft forwards. When you VTOL up, it will cause the pitch to go negative, thus producing forwards thrust (like a helicopter. Throttle is RPM, and then constant speed acts like collective). Negative VTOL will do the inverse. Up to -1 VTOL will control the pitch of the blades to negative, BUT, it will turn off (hopefully) once you go past this. After that point, the flaps will have 2 deployment amounts. At -1 VTOL, the flaps will go to LANDING, meaning 100% down, that way the reverse thrust works at the same time. At -1.5, the flaps will go to about 75% down without the reverse thrust, and at -2, the flaps will go straight down.

On that note, I want to add the extendable cone that goes over the jets when they are off. There will be a delay on their start up, and they will activate in pairs (inner and outer). The cone will drop, the starter jet will turn on, and then the actual jet will start. I want to have realistic power, so don't expect a massive power boost from these jets

I will need to conserve the AG groups. 6 of which are going to the props for their start up procedures, and 1 will be going to the Nav lights. I want to make the aircraft as useable as plausible for VR players, and as realistic as possible. So, I need to find out how the weapons controls work, because I want there to be a realistic bomb bay doors release lever. But, to conserve on AG groups, it will be activated by selecting the weapons. The aircraft will also have chaff and flares on the rear. The rear turret MAY have auto-aiming. Actually, it will

And finally, I have 2 concepts for the control surfaces. 1 is just a rotator that rotates after a slight delay after a smaller trim tab rotates, and 2 is a shock or piston system that is attached to a floppy rotator, that way the control surface can move like the real one, and return to it's original position. I will be testing the latter, but it will likely be the former to conserve the already high part count

Sorry, this was a big update. I just want to write my thoughts down to remind myself later of how to build this lol

Found a good blueprint that I'm probably gonna use for the main fuselage and wings (NOTE: I am NOT doing the nose cannon. I'm making a B-36J-III model) 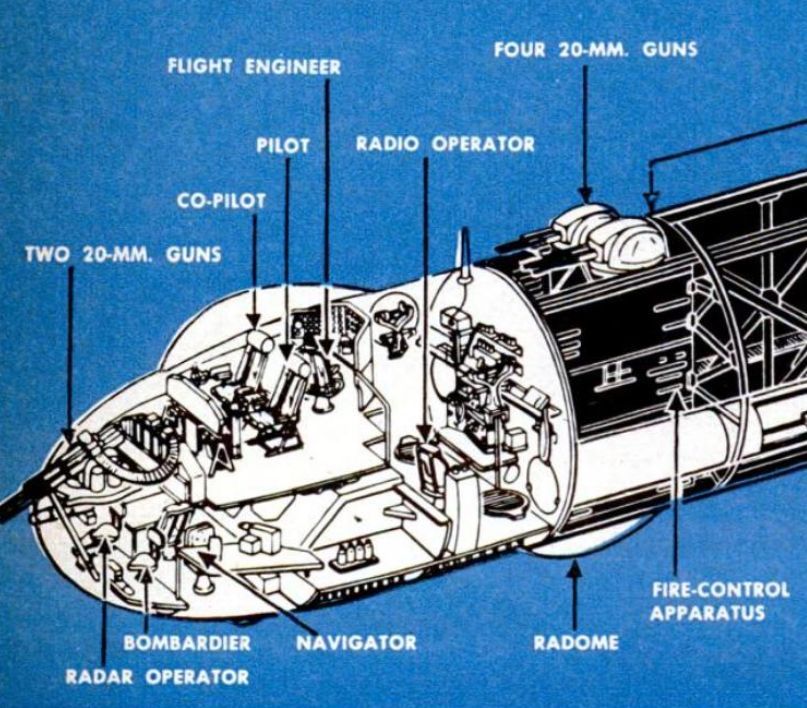 This is a blueprint for the nose area. Disacknowledge the 20mm cannons
I will follow this as much as possible, I will likely make the entire frontal section, but I doubt that I will make the rear section. I intend on adding the bubble cupolas and add seats there to look through in VR, but other than that, most likely will not include the aft compartment
The rear gun will have an external camera, though

Okay, I found some close-ups of the very detailed sections I have to make. This, for one, is the main cockpit

Note: The throttles in between the seats were rarely there on the actual Peacemaker. They were always at least in the flight engineer station, but later on it was used by the flight engineer, and then during landing the pilots controlled the throttle, that way to maintain landing safety

If you look close, on the left (main pilot's) side, on the roof, you can see four throttles. Those control the jet engines (which is really funny, because they just kept adding new technology to an old design. So they ran out of space in the flight engineer's station, and added the controls to the pilots) 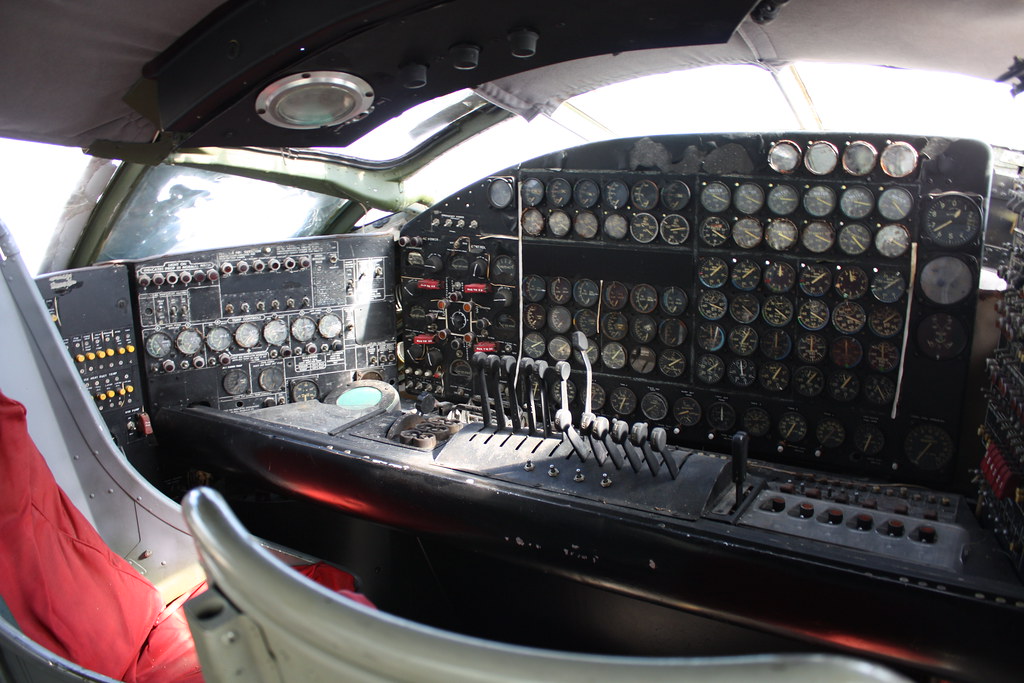 And this is the flight engineer's station

As you can see... HOLY DIALS
There are so many dials and stuff on the Flight Engineer's station. They also have the Mixture and Throttle controls, much like how it is set up on the B-29/B-50

The Flight engineer station is facing backwards from the pilot and copilot, allowing them to communicate commands back and forth relatively easily. The pilots maintain flight, and the flight engineer makes sure that the piston engines are kept running. Otherwise, an aft compartment officer is sent to go fix the problem lol 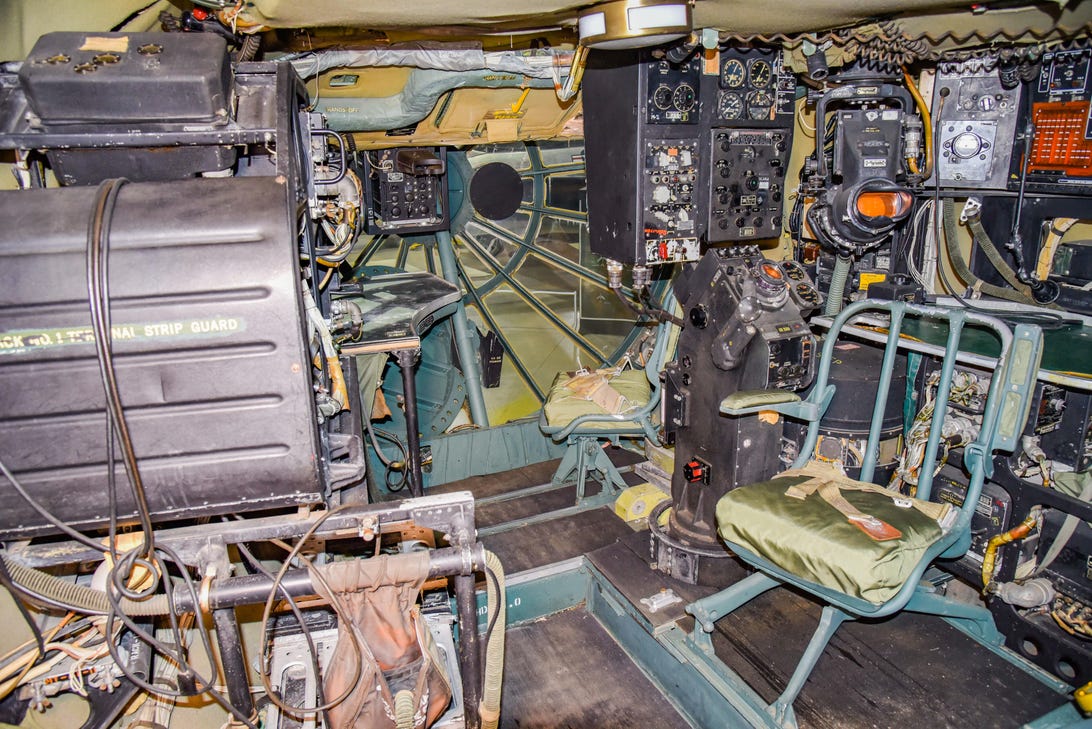 And finally, the bombardier and radio operator*/navigator area. This area has a Norden bombsight, a massive radio, as well as the navigator's seat. I need to do more research on this section, but yeah. It's a super cool area

*NOTE: I was wrong. I meant the RADAR operator. The radio operator is sitting at the rear of the front compartment. I likely won't make it though. I will be making the top cockpit and the bombardier section (navigator, radar operator, and the bombardier)

Well, lest to say, the update came WAY faster than I anticipated, and in a hell of a good way. After making some plans and getting an idea put together, I started constructing my B-36 Peacemaker

Right now, I am just working on the literal framework, and outlining the aircraft. I have done exact measurements, and I am going to start putting the external panelling on (NOTE: I will add the tail turret later, once I learn some FunkyTree codes for it. I also am not panelling the cockpit area yet. Will do that by the end of this week)

With all of these new parts, I am planning on making this GREAT. I have a great idea for it, and it's gonna come out amazingly. You might be wondering "What are those white pieces?" Well, that's the area for the bomb bay. And the other empty spaces on the bottom? Well... just haven't gotten that far yet lol

^As you can see, perfect measurements (except for the height lol. I'm waiting to start the gear first)^

Alright, so I've now made a LOT of progress. My phone is almost dead, so I have to stop and wait until it charges...
BUT. I have almost finished the base panelling on the central fuselage now. Pretty much everything is empty and blocked off, but I have added 4 cupolas to look outside like "windows." I will not add details to those seats. I will, however, add extensive detailing to the cockpit and bombardier areas.

Right now I am working on starting to get the gear done. I am trying to do the nose gear, to get a guesstimate for where the main gear need to go (I also need the codes for the main gear lol)
Either way, it is coming along. The wings are looking good, just need to perfect the triangles and decrease the size of the rear, and this thing should be good to go! The bomb bays are also outlined, but because of how I want them to work, I need to wait for the bombs to be made first. At this rate, the first flight should be near the end of this week!!

Alright, this update has been SEVERELY delayed, but I am now updating it

I will start from the earliest to the newest updates for the photos, but here is what has happened:

Right now, I am about to finish the wings, add the jets, add the bomb bay, and then add a bunch of details around the aircraft, and add the tail turret. After this, I need to fix up the flight model (which will be aided by the wonderful flight testers), and then I will make the cockpit separately, and then slap that on and finish the nose up, and it should be good to go!
This project has gone a lot quicker than I thought it would lol

OH. I also need to add the flaps lol. I'm going to work on that and the bomb bays now, just so I don't forget

Main gear... they are gorgeous, and they work!! (And yes, the bomb bay is ugly. I'm going to add lights and fix it here in a minute)

Look at those gear :O

This shows the specs and stuffs lol