This tutorial is to help new builders to build a replica fixed wing aircraft. With the most comprehensible way to make a replica fast. All the steps are based on the experiences I accumulated. I will take the M6A1 Japanese WWII fighter as an example. 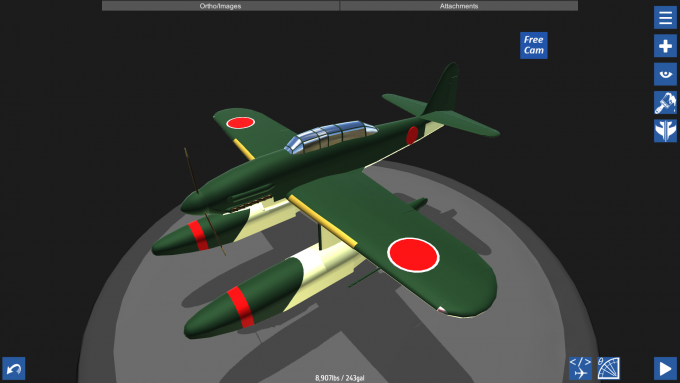 The performance is based on these specifications:

If you don’t have the wing loading, that’s ok.

I recommend using Wikipedia to find the data. To make a replica, Scale is very important.
In Simpleplanes, length of 2=1Metre
e.g. To make a 5m-long-fuselage the block’s length is gonna be 10.

Make a support block with glass, it can support the aircraft before you make the landing gear.

The supporter glass's length and wide is aircraft’s Length and Wingspan.
Load the blueprint and adjust the scale. (This scale number is going to be use times, make sure to write it down)

Use 0.001 mass and 0 drag fuselage to build the fuselage. (VERY VERY IMPORTANT)

The mass of Shock,Piston, Rotors,Pylon,Detacher and wheels can not be 0 because the material strength of these parts are affect by mass. Also, the parts connected to those parts can either be 0 for the same reason.

These xml are very common as well.

To make an accurate Empty weight, you need to know the fuel capacity first.

Add one Fuel Tank and scale it small.
Adjust the “fuel” and “capacity” to match the Fuel Capacity you just calculated.
Also, don’t forget to set the fuel tank’s drag to 0.

CoM is the Centre of Mass.

Change the mass scale of the fuel tank to match the aircraft’s weight to “Gross weight”.
The CoM’s position can be change easily due to almost all the weight is at the “fuel tank”, so you can just adjust the position of the fuel tank and the CoM will follow.

The position of CoM plays an very important role in the aircraft’s performance.

Drag Point is a concept to describe how much drag your aircraft have.
The drag ratio can be change by rewriting the “dragScale” in overload.
The drag have a big differences between aircrafts due to the different size and shape.
Example: (for reference only)

The aircraft should have no drag now because the whole fuselage is made of 0 drag block.
After confirming the drag your aircraft have, it time to add them on it.
I usually add drag at both side of the wings’ leading edge.

Wing loading is the most important part of making a realistic performance aircraft.
The Wing area we talk about is the area of the wing including the main wing and the horizontal stabilizer. (Vertical stabilizer is not included because it does not generate lift)
Also, don’t forget to set the wing’s drag and mass to 0.

Estimate the ratio between main wing and the horizontal stabilizer. I’ll take 4:1 to the M6A1. Start a new file to make the wings.

If you can’t make a perfect wing size manually, adjust the tipPosition in overload for fine-turning.

Save two wings as assembly and install them on the aircraft, you can move the main wing little bit closer or further to the CoM to make sure the CoM-CoL distance is fit.
Also, the main wing should be closer to the wingtip so the aileron will be more effective. Nothing special, just adjust the powerMultiplier in overload and test out the max speed to match the data you found.
The engine will have a different thrust ratio at different altitudes, I usually test the aircraft at sea level or Cruise Altitude.
P.S. Trim the aircraft roughly during propulsion test to make sure the speed is tested in a straight flight.