This post is for an outdated version of Funky Trees. Comparison operators have been added!

Feel free to check out the (now more relevant) post by snowflake.

Nice Clickbait. A long read, but might be worth it. Scroll down if you just want to see the flight system.
Here’s some potentially useful info to help you make some smart machines with the funky trees update. I also included a nice system that I have been working on at the end. As a quick disclaimer – I am only a novice at coding, so please be gentle with me!

How to Compare Values With Funky Trees

With the development of funky trees, many people, including me, asked if it was possible to use comparison operators (>, < , <= , >=, ==) with the new input system. At this time, the answer is no.

So, is it not possible to compare values in the current state of funky trees?

Of course, those nifty inequality symbols help a TON with comparative logic, but the same effect can be produced without them. The concept behind this is called “selection by calculation” - a somewhat disgusting topic that I had to suffer through as part of a coding course that I took about a year ago. In “selection by calculation”, arithmetic can be combined with functions such as ceil, floor, clamp, and clamp01, to produce a value of 1 or 0 when a certain variable reaches a desired value. Functionally, this is similar, if not identical to, those fancy operators that are not in funky trees (>, <, <=, >=, ==). At least in the few coding languages that I am familiar with, comparison produces a value of 1 or 0, which translates to true or false in code-speak. For example, the following expressions, which are true, would be evaluated to 1:
5 > 1 25 == 25

So, the behavior of comparison can be replicated by using some math, but what does it look like? The answer to that isn’t too simple, but it can be answered by another question. For example, I ask myself, “how can I make this expression equal zero when it is false?”, or “how can I make this expression equal one when it is true?”. Division, subtraction, and multiplication are excellent tools to reduce an expression to 1 or 0. The functions, ceil, floor, clamp, clamp01, and even sign, are also extremely valuable to use. The goal, then, is to use some math to produce a 0 when the intended comparison is false, and a 1 when the comparison is true. When crafting a comparative expression, try using some test values to see if it works.

While I can ramble on about weird arithmetic, it would probably be more useful to show some examples. Here are some expressions, and their comparative twins, for you to look at:

Note that I didn’t include an equivalent expression for the equal to operator (==). Note that such logic can be done, but isn’t too useful. An exact value rarely happens in SP, so it is better to use tolerancing.

Tolerancing can be done with the functional equivalent to the and (&&) operator. This is very simple to do, and can be done by multiplying two comparative functions to each other. For example, lets use the two functions that were previously developed:
clamp01(X - 5) * clamp01(5 – X)
Note that no value for X can be used to make this function evaluate to 1, or true.

Showing Off My Spaghetti Code

“Selection by calculation” is very useful for making all sorts of stuff, but my first (successful) use of it was in a VTOL flight system capable of maintaining a steady altitude, descending at a constant speed, and ascending at a constant speed. This means easy hovering, and easy landing! A lot of comparative logic is used here to have an upward-facing VTOL nozzle fire (or stop firing) when a desired vertical velocity (negative, zero, or positive) is reached. The VTOL power is also regulated by throttle, and a unique comparison (case) is used for VTOL up, center, and down. Specifically, each case is a “block” of code, and each “block” is added in the overall code. Here’s a graphic of a top-level view of the code: 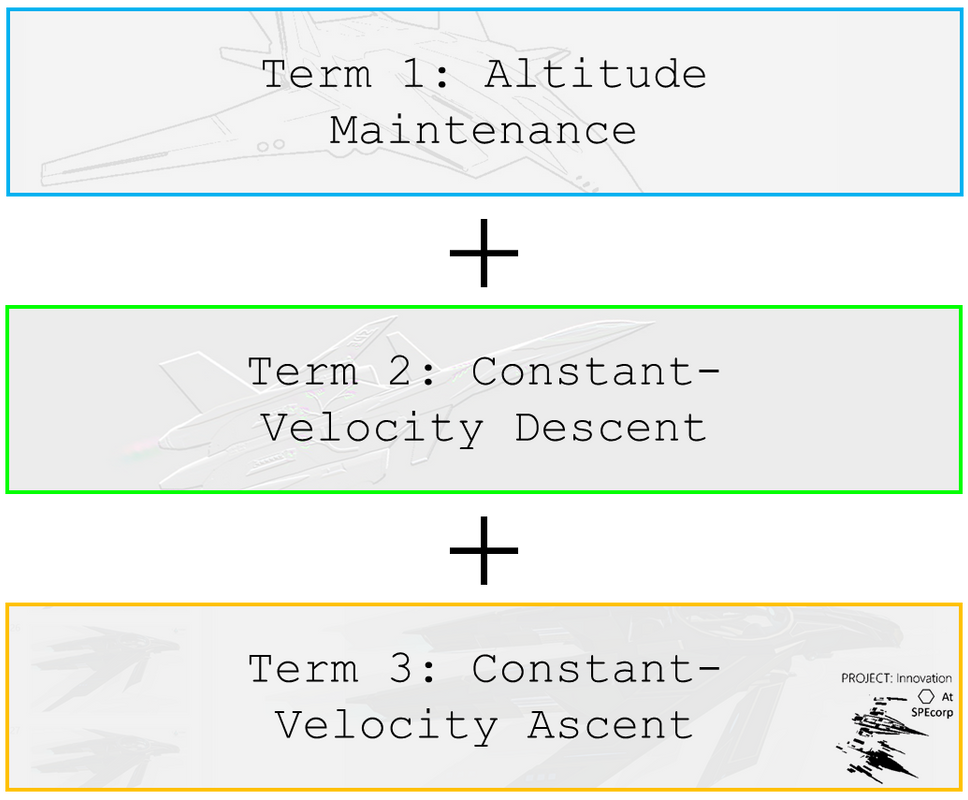 Each case is isolated by the use of addition, and is evaluated to be zero when it is not valid. For example, if the VTOL bar is set at its center, term 2 and 3 evaluate to be zero. Each case contains, then, a VTOL comparison term, throttle term, and unique descent/ascent/hover term, all multiplied (and logic). Here’s a… less top-level version of that graphic. 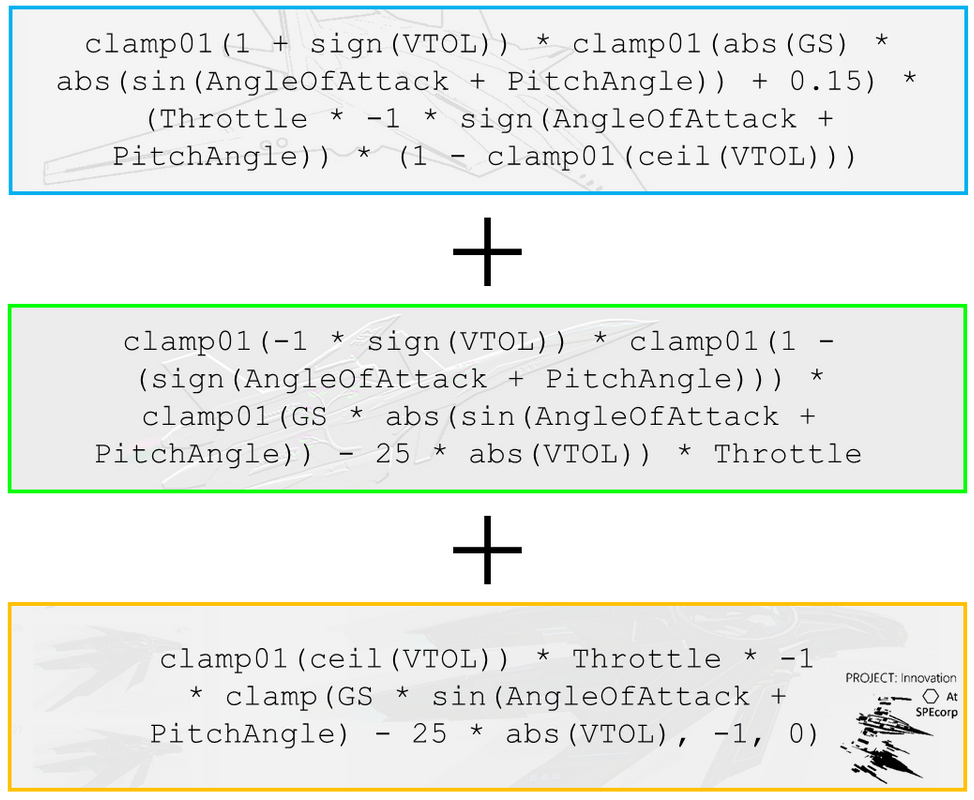 Note that the code could definitely be streamlined. Additionally, a smoothing term was added to the “hovering” term (1) to make the ride a little less bumpy. The ascent/descent terms are compared to a vertical velocity that is determined by a max value, combined with the position of the VTOL slider. Vertical velocity can also be reflected by GS * sin(AngleOfAttack + PitchAngle). Here’s the final code, and a graphic to represent it, respectively: 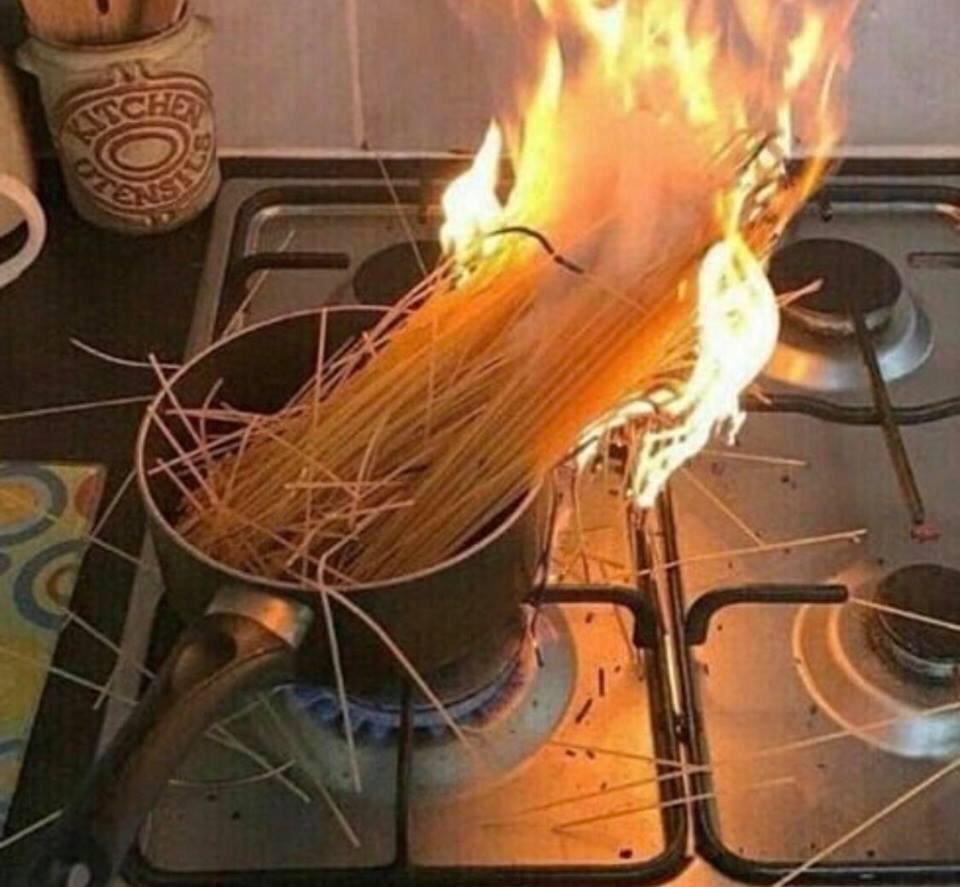 The flight module itself can be downloaded here! Feel free to give it a spin.

Well, thanks for reading! Hope that the tutorial makes sense. Feel free to ask questions – I’ll try my best to answer them.