Are you tired of this happening on your own tank designs when they shoot each other?

Do you want your tank to at least roughly simulate its armour profile like on war thunder or world of tanks and mostly not explode unspectacularly when hit?

Well good for you because I'm just about to teach you the closest we'll ever get to war thunder in simpleplanes, at least for now.

However you're always completely free to decide whether or not to adopt this DMG model into your builds, as it takes alot of time to get used to this and to take full advantage of.

I think it can also be used in MP! But I'm on Android so all I could do is dream, hehe, must be fun though.

Before we start we need these very crucial parts first, I recommend to set these into subassemblies to avoid trying to XML every part.

--Major fuselage: The most important part, this is the base model, the part that you use to make the hull and turret.

--Detail fuselage: The part you want the cannons to pass through and not interfere with the damage model, you could use these for skirts, boxes, and more.

--All other parts: To make sure absolutely nothing goes wrong it is important for all other parts, mostly the engines, shocks, cameras and gyroscopes, to be set like this.

--Tank machinegun: To make sure that they aren't too OP, as the DMG model is health based, machineguns would perform better than cannons if untouched, although aircraft machineguns should stay the same, only change if you don't want tanks to destroy each other by only machinegun fire.

As mentioned above major fuselages are the one that you'll use for making the hull and turret, while the detail fuselage is only mainly for details only.

This is because detail fuselages will let a Cannon shell through, while major fuselages won't. 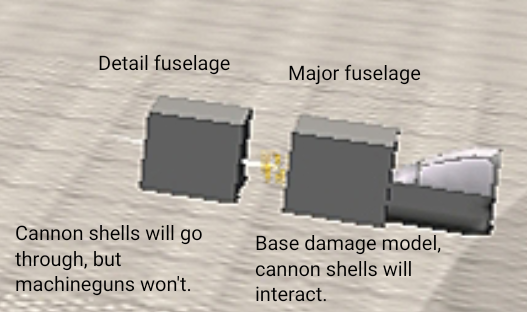 Now all of that is done now it's time for the actual tutorial!

Remember that I stated that the major fuselage is on 430 health? Well it is on the perfect balance of not exploding and exploding, it also is the lowest, meaning that most of the time when it is hit once, (unless when angled) it'll always flame up.

basically you want your tank to flame up when critically hit rather than exploding, but sometimes after the fire has stopped, the tank will still remain fully functional so the only logical thing left to do is to pretend that it is disabled, just like in airsoft. 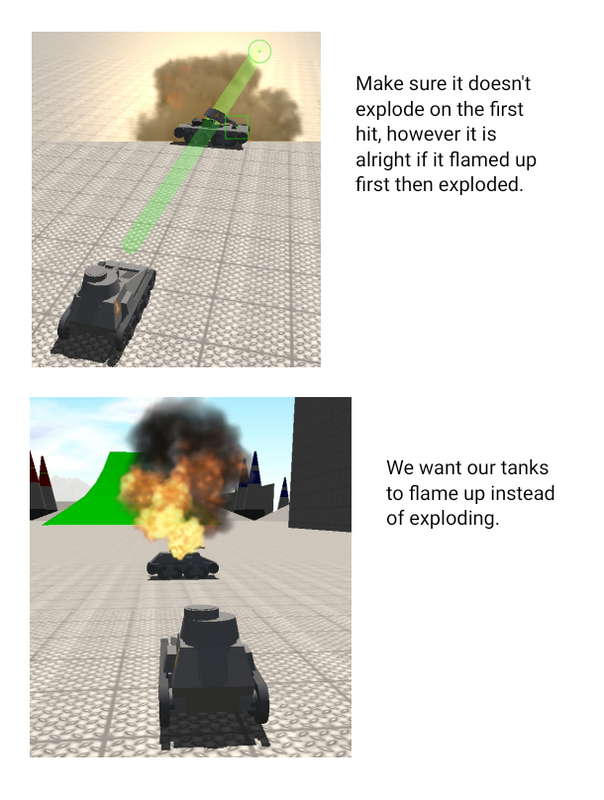 This will become more and more of a problem as Cannon shells get stronger. (By the use of impactDamageScalar) 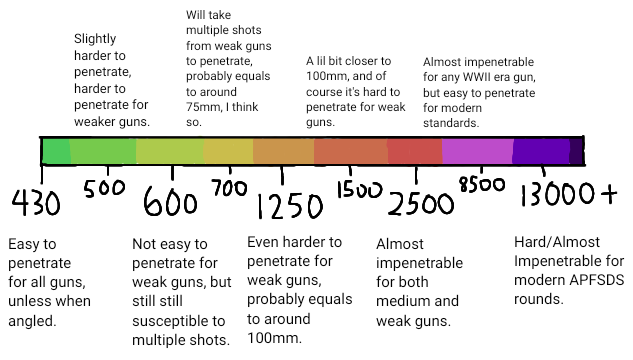 Major part health in a nutshell. (Please note that there were some mistakes made)

Now it becomes very simple, the health defines how thick the armour is on that area, in other words, how much hits it'll take before it flames up. (not explode)

Since the damage model is health based, it is actually much closer to World of tanks than War thunder.

Take note that angle will also increase its effectiveness.

430hp is mostly used on the side armour of medium tanks and light tanks, since it'll mostly take a single shot from almost anything unless when angled, just like in real life.

500hp roughly equals to around 45-50mm of armour, it is just slightly tougher than 430, and will take more hits from weaker guns before flaming up, I rarely use it for side armour though.

600-800hp is mostly used for the front armour of some medium tanks aswell as side armour for heavy tanks, it roughly equals to around 55-60mm.

2000-5500hp is mostly used for the front armour of heavy tanks, at this point the only thing that could reliably critically damage it are cannons with impactDamageScalar set higher than 1.

10000 is the lowest for MBT standards, it'll only take a single hit from any gun with (9.5+ impactDamageScalar) for it to be critically damaged and flame up.

Fine-tuning is key to achieving your desired armour performance.

-What happens when the health is too low?
(It'll explode instead of flaming up)

-What happens if the part is set to Default instead of None?
(Parts set to None will only explode once its hp reaches 0, while default will explode if it took too much damage on a single hit regardless of hp)

-What happens if there is no fuel on a part?
(It'll explode instead of flaming up, once again)

The gun is equally as important as the armour.

Like for example, you know something's wrong when a 37mm gun can critically damage the Tiger1's front armour in only 2 shots.

It's actually pretty simple to set up a guns performance to at least mimic the performance it is supposed to have.

And it is by the use of this wonderful, wonderful XML Jundroo has given us included with the cannon, impactDamageScalar.

To fine tune the guns performance to roughly match its penetration simply just gradually increase/decrease its impactDamageScalar until it gets close enough.

For example, I'm testing a 37mm gun that's supposed to pen only 60mm, and I'm going to shoot it at a major part with 500hp, first hit instant flames, lets reduce it to 0.8. Second hit still a one shot, now i'm gonna reduce it even more to 0.6, now it critically damages it in 2hits, and even more when angled. Exactly what I wanted.

Normally for powerful guns I mostly set the impactDamageScalar to 3 - 5, for modern main guns maybe around 8 to 11.

For average guns (mostly WWII era) I normally just leave it in it's default value, 1.

Weaker and smaller calliber guns typically have amazing velocity but somewhat weak/average penetration, so it is necessary to lower its impactDamageScalar value to something lower than 1 to compensate for its velocity.

But since this is simpleplanes, the damage model could only be health based, so volume/rate of fire could be really overpowered, that's why I avoid autocannons now.

Velocity and calliber effects the damage dealt too, calliber I assume produces the most recoil and knockback to the target hit, velocity further increases recoil and damage dealt, but probably only affects knockback a small amount.

My advice is to set the calliber to be slightly smaller than the actual calliber, to hopefully reduce the knockback dealt to the opponent.

-What if the gun is too powerful or has too much impactDamageScalar?
(If a powerful gun hits a low hp major part, like let's say 430hp, especially from a flat angle it'll explode without flaming up, this is what I call "Overkill" and this is a big problem for MBTs)

Ranked from most noticable to less noticable based on my experience.

1 - Health based, meaning that even the weakest guns could still take down an otherwise impenetrable tank as long as it fired enough rounds into it, even at steep angles.

3 - No formula present, armour and gun performances will just be close enough guesses.

4 - Not easy to get used to or explain, I tried teaching these to some of my discord friends, and only a portion of them understood the concept.

5 - Bots do not know how to roleplay so if they didn't explode after being set ablaze they'll still move around.

1 - Better than nothing right?

2 - Probably amazing but untested multiplayer potential. (Which is basically the reason I discovered this anyway)

3 - It took me 6months to figure this out, but unlike me you could learn it from this tutorial and only take like a week or maybe a month to fully understand it.

If you still didn't get it until now, don't worry it isn't your fault, I'm just terrible at explaining things. :3

Thanks for reading! It took me quite some time to write all of this too, I really hope this'll help you.

If there are still some questions or misunderstandings feel free to comment, I personally will answer it.